Thirty-year-old João Cura and his wife, 29-year-old Sofia Gomes, may be young but they have long had a wish to open their own restaurant. Yet it was never totally clear where or when they would fulfill this dream: both are originally from Coimbra, a city in central Portugal, and worked for years in Barcelona.

The couple finally found a perfect spot, in Porto of all places, to open Almeja, which fittingly means “to want or to wish for something very much” in Portuguese. Talk about a dream come true.

João took a slightly circuitous route to discovering his love of cooking. On the encouragement of his parents, he majored in pharmaceutical studies in university, which is where he met his future wife. Yet during an internship in a lab it became clear that he preferred practicing alchemy in the kitchen to mixing medicine. He enrolled in the Coimbra Culinary and Hospitality School and moved to Barcelona for an internship after graduation.

He spent years working in the Catalan capital, honing his skills in various restaurants like Dos Cielos, Movínic and Cinc Sentits. It was while João was working at the latter as the pastry chef that he and Sofia began hatching a plan to open their own restaurant. 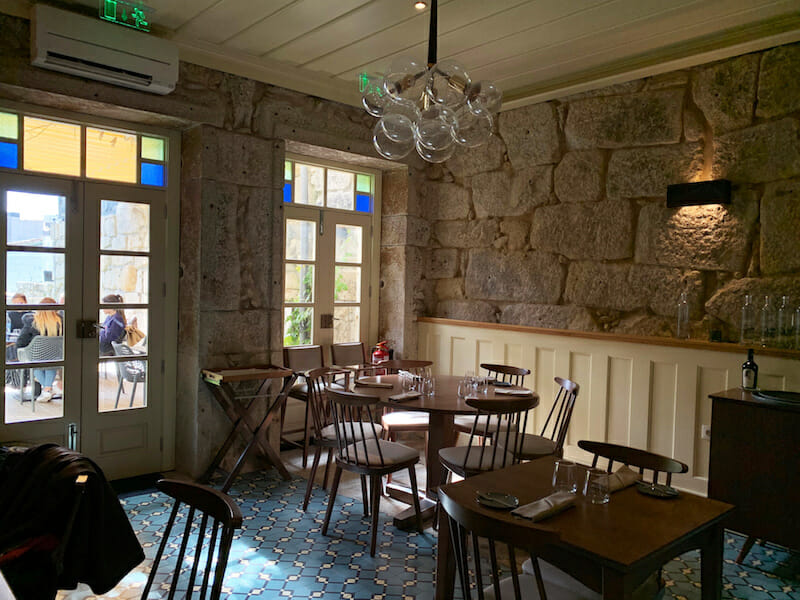 The original idea was to return to Portugal and work for a bit before setting up shop. João initially sent CVs to restaurants in different parts of the country, but the feedback was negative or non-existent.

“We then started to look for a place to open our own restaurant. Lisbon already had a lot to offer and the prices are so expensive, and Coimbra is a weird city in terms of the restaurant scene. We felt Porto was in a good moment, with room for new projects and a desire for quality,” João explains.

After a period in which they were catering private dinners, the couple finally found the perfect spot: a beautiful glassed-fronted space that was formerly home to a coffee and tea shop and is located close to the traditional Bolhão Market (temporarily closed for renovation) and the Trindade metro station. It’s a busy area, where old grocery stores coexist with new restaurants and cafés.

“We felt Porto was in a good moment, with room for new projects and a desire for quality.”

Open since November 2017, the restaurant has quickly become known for its creative and seasonal choices, as well as its affordably priced lunch menu. João leads the kitchen, where he puts a contemporary twist on traditional produce while still preserving Portuguese flavors. “These dishes are influenced by all the places where I have worked [as well as my] travels and memories, but above all by the seasonal produce,” he explains. Sofia manages everything else, not least the front of the house.

While the tasting menu and ordering dishes à la carte are sound options, we opted for the special lunch menu, which offers the chance to taste some delicious food and Douro wine (Sílica) for €15 (included is soup or a starter, bread and butter, main course, a glass of wine, dessert and coffee). There’s another option for €9.90 (without wine and dessert). Indeed, it’s refreshing to see contemporary restaurants with options for those who cannot pay that much for a meal.

At dinner, dishes such as the bísaro pork (a breed from northeast Portugal) or aged beef cost around €20. The catch of the day is normally a similar price, while the iconic rice from Mondego (the river that crosses Coimbra) with cuttlefish, cuttlefish ink and samphire is €17.50. 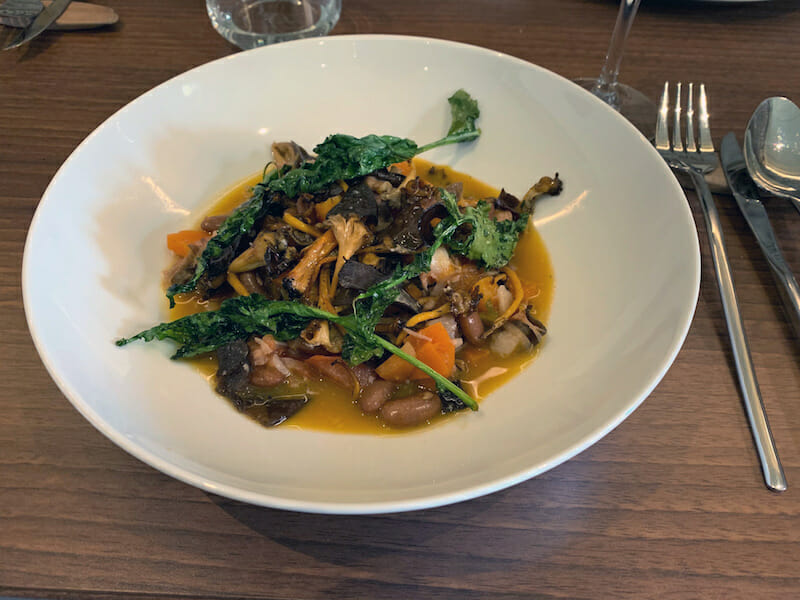 João gets his carolino rice (a short grain variety much loved in Portugal) from Tocha Market, located an hour or so from his hometown of Coimbra. “I like to buy legumes and nuts there too, but I also buy nuts, cheeses and meat in the shops near the restaurant,” he says. He also gets the “best vegetables” delivered from the Douro Valley. After tasting the bean stew with mushrooms or the meat stew with mashed potatoes, we have no doubts about the quality of the produce.

Porto is known for buildings with beautiful ground floors, many featuring long rectangular gardens out the back, and Almeja is no exception. The back garden has a few tables and enough space for parties. João found signs buried in the garden from the former coffee and tea shop, and these now hang alongside stamps from the coffee bags on the restaurant’s walls; some original furniture as well as the first room’s floor are still intact.

The renovation was beautifully done and once the works are finished out in the street it will be even nicer to sit down in the main room. On our visit we were impressed by not only the quality and flavors of the dishes, but also the cozy and informal setting.

For now João and Sofia are very busy, having fulfilled another wish: they are now balancing their work at the restaurant with caring for a newborn baby. The verb almejar has never been so well used. 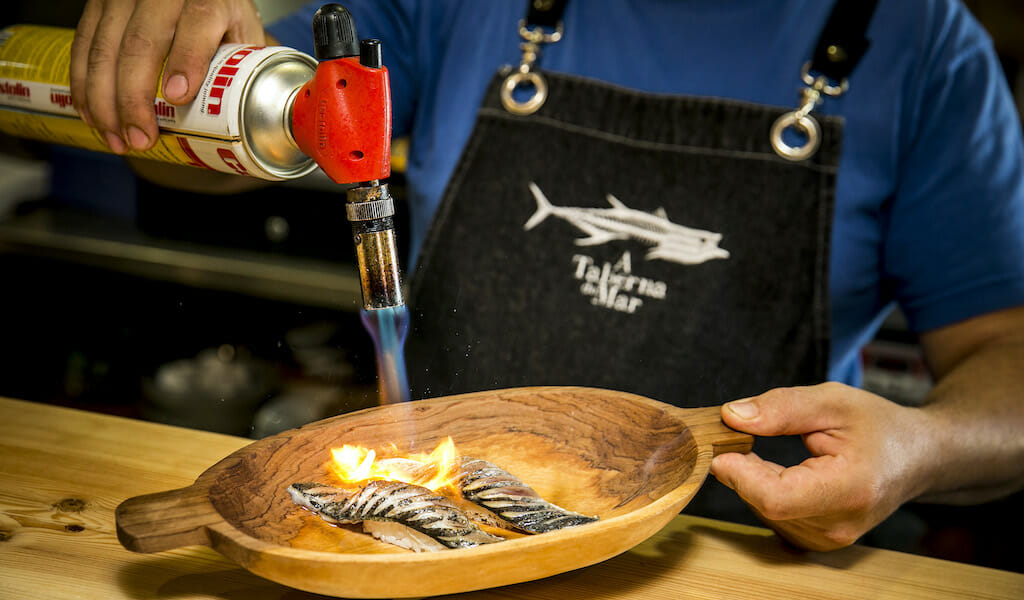 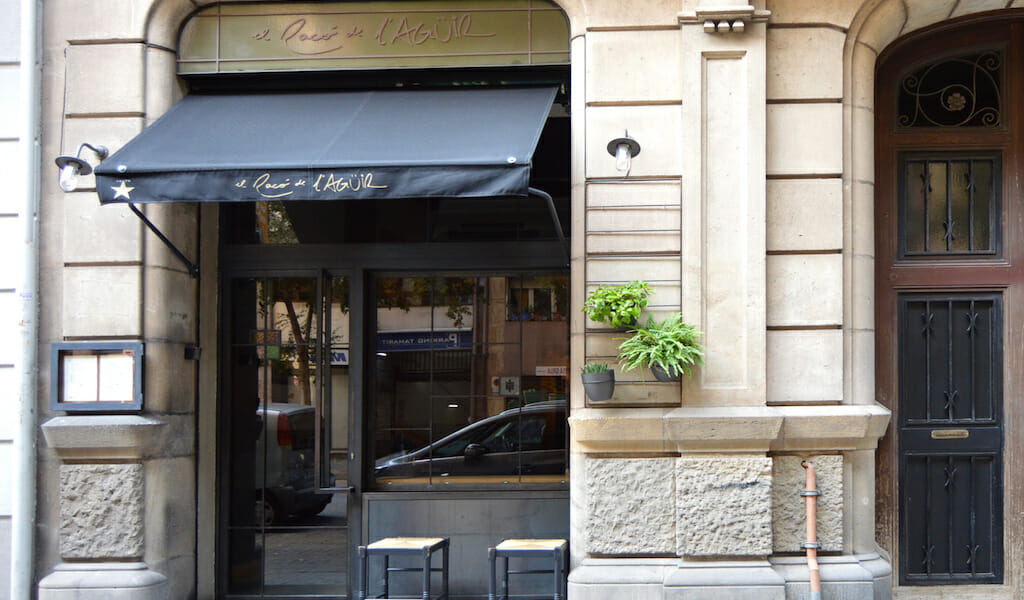 Barcelona | By Paula Mourenza
By Paula Mourenza
BarcelonaEl Racó de l’Agüir (“Agüir’s Corner”), a restaurant in Barcelona’s Sant Antoni neighborhood, has been a long time in the making: it represents the life’s work of the Agüir family, the culmination of their talent and experience. Two generations can be found here – parents Roser and Ferran, who have managed four different restaurants over…
Almeja
Rua de Fernandes Tomás 819, Porto
Tel. +351 22 203 8120
Hours: Tues.-Sat. 12:30-3:30pm & 7:30-11:30pm