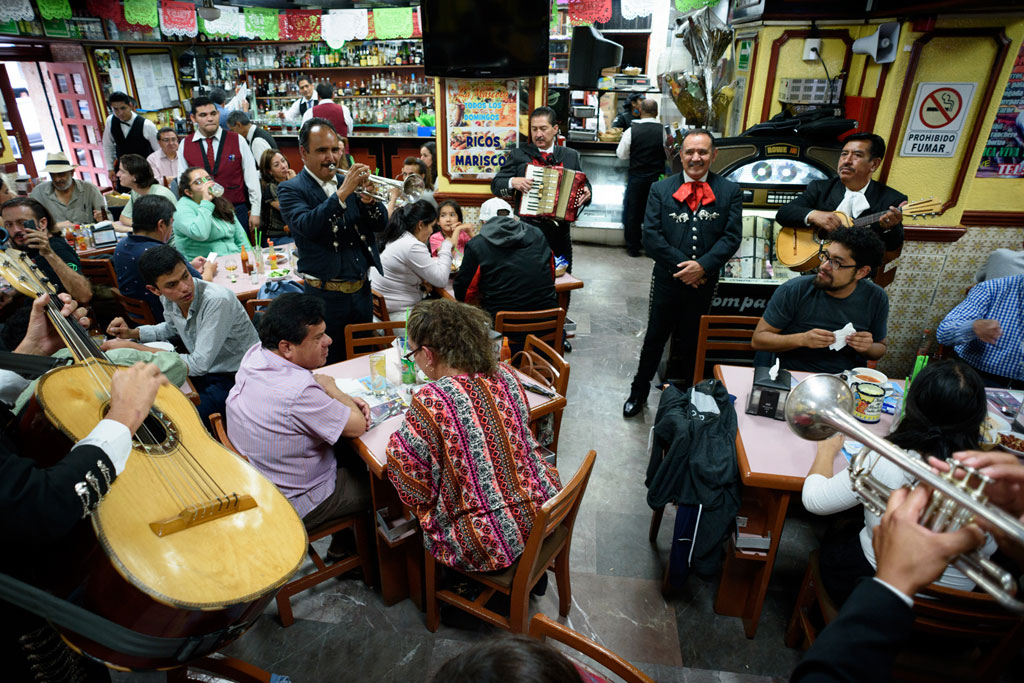 For those of us who like a long, boozy lunch unimpeded by thoughts of going back to work – at least once in a while – there is no better place for it than a Mexico City cantina. Although they are mostly no-frills establishments lit by fluorescent bulbs, cantinas have as much personality as London pubs, Paris cafés or New York bars.In a far from egalitarian city, they are the most democratic institutions. Anyone who can afford the price of a drink (which limits the population drastically) is welcome.

Cantinas draw their biggest crowds in the traditional Mexican lunch hour, anywhere between 2 and 5 p.m., and a meal in one is usually a drawn-out affair. On Fridays, some patrons tend to stay until the waiters have put the chairs on top of the tables and they are thrown out. Most cantinas shut their doors by 10 p.m., with only a handful that stay open until midnight or later.

The best attract a heterogeneous crowd: bureaucrats in polyester, sometimes alone and sometimes accompanied by extravagantly made-up women who are clearly not their wives. Guys with thick moustaches and muddy boots, who appear to have just gotten off a turnip truck from Sonora. Smooching couples. Art students and hipsters in stingy-brim hats, sporting elaborate tattoos. Middle-aged boulevardiers in shiny antique suits. Guys with crew cuts who could be drug dealers, federal police or perhaps both. An evident minority of foreigners, teachers, journalists. On Saturday afternoons, some cantinas attract entire families, including toddlers and grandparents. 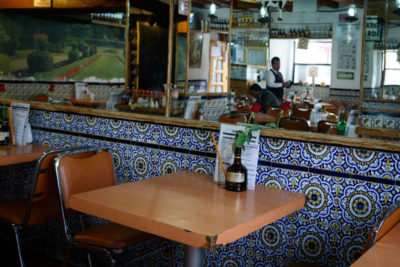 Perhaps what best distinguishes cantinas from bars in other cities is that they are great places to eat, and the food comes free with the price of drinks. No city we know is as generous to its drinkers as the D.F. From two o’clock on, customers are rewarded with botanas, food cooked on the premises. While each portion is not huge, there are frequently five, six or seven different items available to anyone who keeps drinking. The abundance, variety and quality of the offerings can be overwhelming. For example, at La Mascota on Calle Bolivar in the city center, on any given day customers might be served pancita (a spicy tripe soup), carnitas (different cuts of seasoned and deep-fried pork), chicken in green sauce, meatballs in chipotle chile and so on. As long as you continue drinking, the waiter will keep the dishes coming until you cry uncle.

This is a ploy to keep customers in one cantina rather than going off on a crawl to several. During two and a half hours at a cantina called La Auténtica, we recently consumed – apart from an avalanche of tequila and beer – cream of chile soup, beef broth, steak tartare, chiles stuffed with cheese and an enormous chamorro – a pork shank that, once picked clean of its meat, appeared to be a lost dinosaur bone. After coffee, we asked for the check. The waiter, a wounded expression on his face, asked, “So soon?”

Because food is free, drinks are, at least by Mexico City standards, highly priced at cantinas. For example, at La Mascota, a beer is 53 pesos (about $4 U.S.), whereas it might be a little cheaper elsewhere. Tequilas and whiskeys tend to run between 85 and 110 pesos ($6.50 to $8.50). Given that customers have carte blanche to eat as much as they like, we believe that cantinas are still an incredible bargain. And certain cantinas, such as Bar La Vaquita, are notably inexpensive, even though their botanas are equally abundant. Beers are only 20 pesos ($1.50) there, and you can get a whisky for 35 ($2.70). Obviously, at that price it’s not an aged single malt, but a bottom-shelf stalwart like Passport or Vat 69. 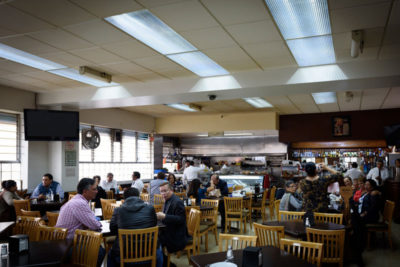 Some cantinas do not serve botanas at all. Customers at these establishments order from an à la carte menu. At Bar Sella, near Centro Médico, one of the city’s most important hospitals, the clientele – many of whom are doctors, nurses and medical administrators – feasts on dishes such as tortilla española, parsley fried in bacon fat and the best chamorro in the city. At Bar Sella, the pork shank is first fried and then steamed in lard. (We imagine that, given the specialties of the house, those doctors aren’t cardiologists.) We go to Bar Sella once in a while because the food is excellent, but it’s obviously a more expensive proposition. When we want to go to a cantina, most of the time it’s hard to resist those where you don’t have to pay for your food.

This feature was originally published on August 21, 2014. 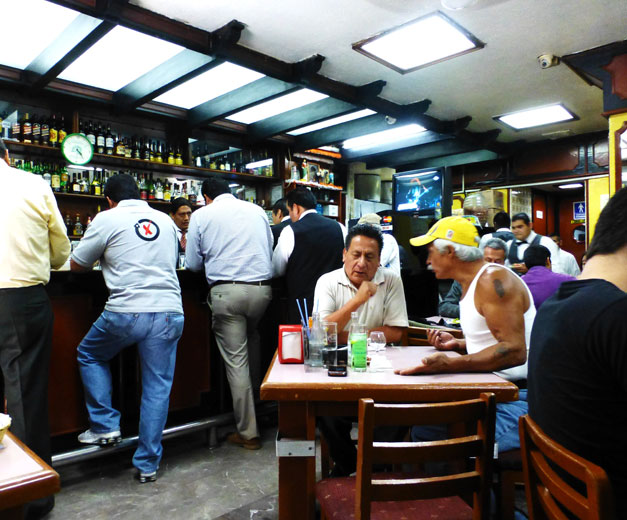 Mexico City | By David Lida
By David Lida
Mexico City -- For those of us who like a long, boozy lunch unimpeded by thoughts of going back to work – at least once in a while – there is no better place for it than a Mexico City cantina. Although they are mostly no-frills establishments lit by fluorescent bulbs, cantinas have as much personality… 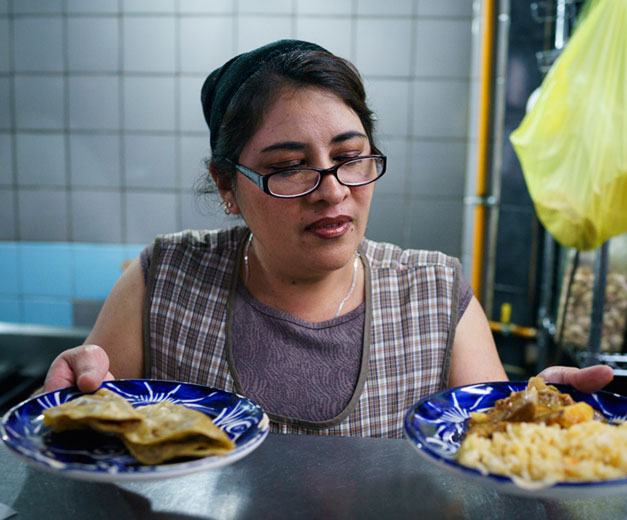 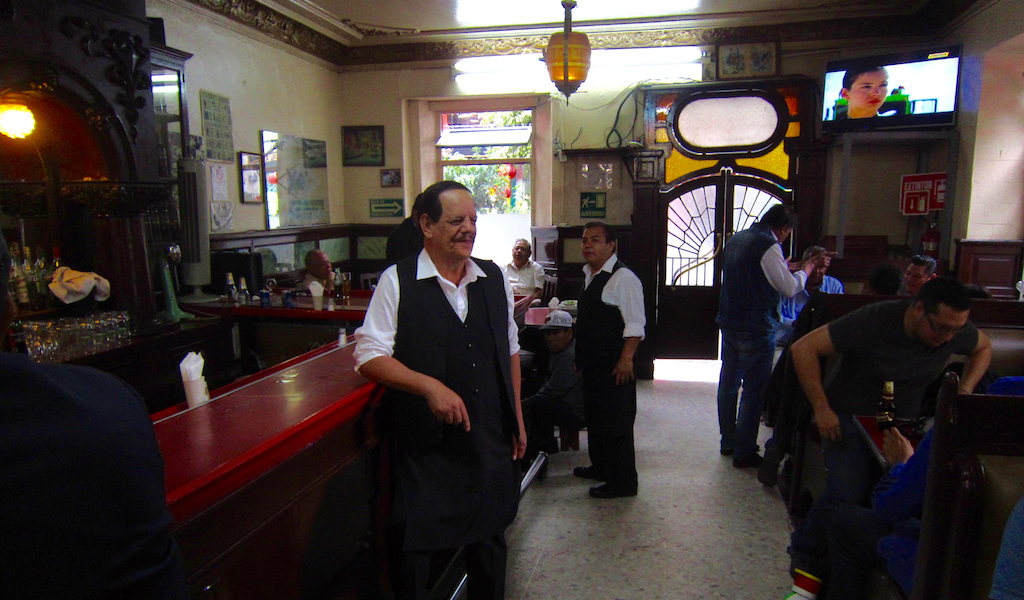 Mexico City | By James Young
By James Young
Mexico City -- For every level of society inside and outside Mexico, cantinas serve as both toxin and tonic for drink, song, jocularity, wit, mayhem and mishap. Tio Pepe, now thought to be the oldest such bar in the old Aztec capital, has provided both in equal measure since way before it received its present name…