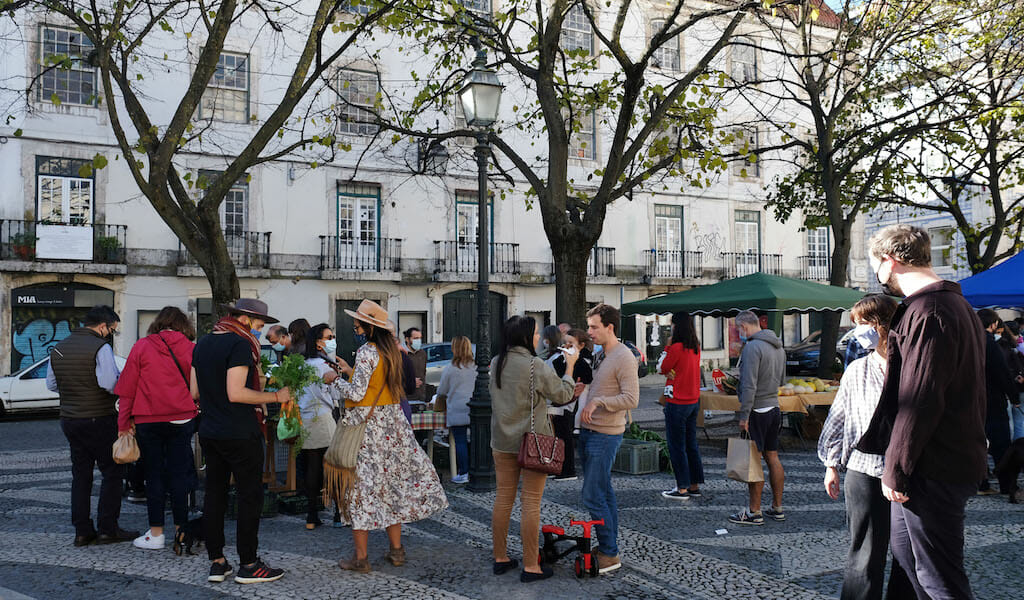 Essential Services: In Lisbon, A New Farmers’ Market on the Block

The current Praça de São Paulo formed in the wake of a disaster: the square was rebuilt soon after the 1755 Lisbon earthquake, and serves as a model of the architectural style from that time. More recently, this beautiful yet oft-neglected square has been given a new lease on life thanks to another calamity – the Covid-19 pandemic.

Over the summer, chef André Magalhães took over the square’s charming red kiosk – the oldest in Lisbon – and overhauled the menu, filling it with traditional drinks, delicious sandwiches and petiscos. And since the start of November, the grocery store Comida Independente has been organizing a successful farmers’ market in the square on Saturdays, bringing Lisboetas in contact with independent producers and one another – a balm in this strange time of social distancing.

Passionate about Portuguese produce and the small farmers and producers responsible for it, Rita Santos established Comida Independente in 2018; the shop, which also holds wine tastings and other events, quickly became one of the most interesting places for food and wine in Lisbon. 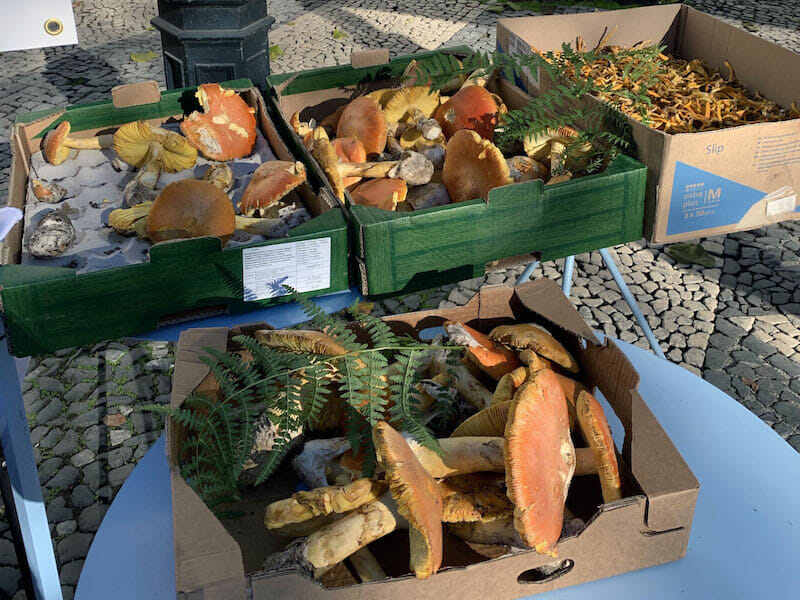 During the initial lockdown this past spring, Rita and her Independente crew (Olavo Fernandes and Marcella Ghirelli) quickly set up a successful delivery service, which later inspired them to launch the farmers’ market. “We were supplying more than 350 families,” Rita tells us. “We had some people asking us to do delivery again but it’s not really our calling. So after thinking some more, we proposed opening a farmers’ market, in the open air, to the Junta de Freguesia de Misericórdia [the neighborhood authority].”

The Junta offered them the use of São Paulo Square, undoubtedly one of the prettiest in the city. Since early November, a small yet diverse crowd has come every Saturday to the farmers’ market, called Mercado de Produtores Comida Independente, to find the freshest vegetables, fruits, artisanal breads, cheeses, honey and more. Producers can cultivate a new customer base, which is crucial at a time when some of their largest buyers – restaurants – are struggling. “Since there’s currently limited demand from restaurants, we tried to make this small-scale economy work, offering high-quality produce directly to the clients,” Rita explains.

“People have been telling us they leave the market with a full soul,” Rita says.

Certain farmers and producers join every week, including Vale das Dúvidas, Quiosques da Natureza, Casa da Saudade, and Microgreens (all based south of Lisbon); Prata de Mel, honey producers from Cartaxo, located north of Lisbon; and Hortelão do Oeste, a farm in the Oeste region, northwest of Lisbon, run by the brothers Miguel and Diogo Neiva Correia. But since each Saturday has a theme, from pumpkins to sweet potatoes, chestnuts to mushrooms, special guests regularly make an appearance.

In addition to buying goods directly from farmers and producers, people come to taste dishes from some of the city’s most exciting chefs, who cook street food using that week’s featured ingredient, and drink wine made by local producers. Chef João Rodrigues (of Michelin-starred Feitoria and Projecto Matéria), André Magalhães, André Lança Cordeiro, António Marques da Cruz and Tiago Teles, the duo behind COZs, a natural wine producer, and Vítor Claro with his Portalegre wines have all made an appearance. 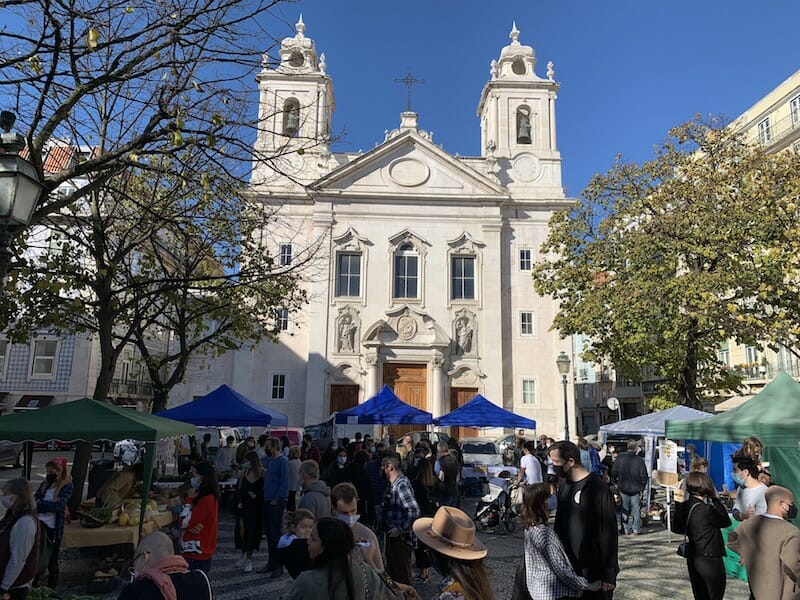 As Rita points out, though, this a market of “farmers.” In Lisbon there are several other markets with organic produce, most prominently in Príncipe Real. “To us, though, the most important thing is what we know about the producer,” Rita explains, “rather than the organic certification, although it’s certainly welcome.” In the days leading up to each market, the team at Comida Independente (which is also still open for business) shares information and photos about the various products and their origins on social media, all of which has been gleaned from visits with producers.

“We think we can go deeper so that people know what they are buying,” Rita says.

For Lisboetas, it’s a pleasant chance also to learn more about ingredients and lesser-known products. We’ve enjoyed speaking to the lovely couple behind Casa da Saudade about their sweet potatoes and jams, and Nina Gruntowsky about her tea produced in Fornelo, near the northern town of Vila do Conde. But there’s also Maria, the cheese maker from I’m Cheese; Jorge Raiado, who harvests flor de sal in the Algarve by hand; and Pedro Almeida, who coats his bottarga in beeswax.

The response over this first month has been overwhelming positive. “We have clients who have been in farmers’ markets around the world, and they come to us asking for oysters or mushrooms,” Rita says. “They’re happy because there wasn’t anything like this in the city.” The street food has also received an enthusiastic response – it’s a rare chance to eat extraordinary dishes at low prices in a simple yet beautiful environment. 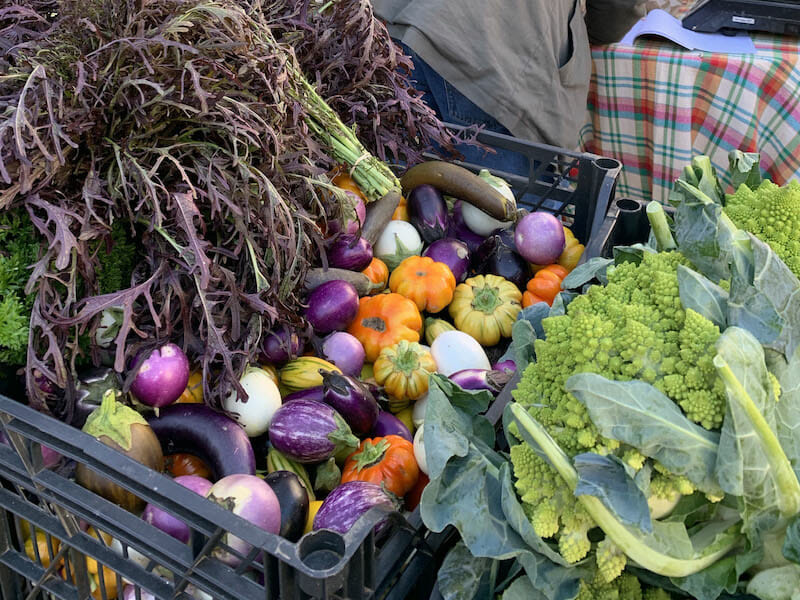 The producers are likewise happy with Mercado de Produtores Comida Independente, not only because they’re able to reach new clients but also because they get to see their products expertly cooked by renowned chefs. Moreover, you can’t discount the human connection. “What surprised me was the emotional dimension of all of this. People have been telling us they leave the market with a full soul,” Rita says.

The market was originally designed to run from 9 a.m. until 4 p.m., with a wine tasting in the afternoon. But the increasingly severe restrictions on the weekends, especially the partial lockdown after 1 p.m., have forced Rita and her team to reconfigure things. The market now closes at 12:30 p.m., but it’s still delicious.

The São Paulo Square farmers’ market is located in the backstreets of the historic Mercado da Ribeira, itself a destination for produce and other goods. But the consensus seems to be the more the merrier – a diversity of markets can only benefit the city’s residents, helping them access more and better ingredients. Confirmed to run until December 19, Rita and her team are hoping to extend their stay in 2021. We will be waiting with our granny cart, ready to fill it with fresh ingredients.

Editor’s note: Our “Essential Services” series highlights the places that are permitted to remain open during lockdowns in order to best nourish their cities. 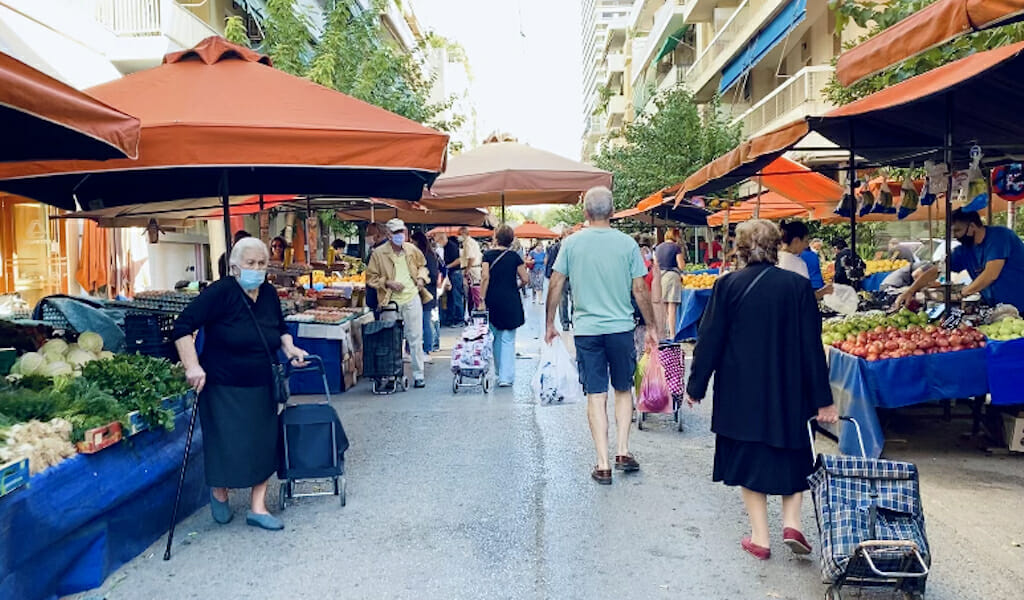