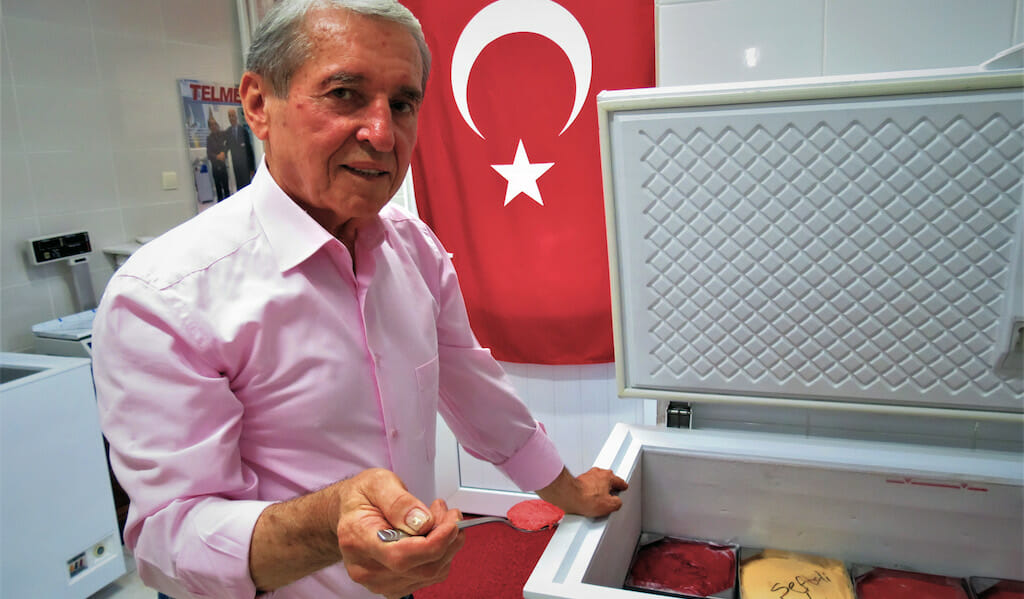 It was a scorching summer day in Istanbul, one of those days when the only thing you can imagine eating is ice cream. We were in Moda, and our friend Vicente suggested a stop at Dondurmacı Yaşar Usta – in fact, he’d been raving about this ice cream all summer long. So we followed him to the branch on Bahariye Caddesi, in hopes of understanding why he’s so crazy about it.

It didn’t take long for us to figure things out. The homey, no-frills atmosphere and the array of creative ice cream flavors make Dondurmacı Yaşar Usta something of an oasis in Moda, a hip neighborhood on Istanbul’s Asian side, where a majority of the new food ventures springing up like mushrooms prioritize a shiny cool look over substance. 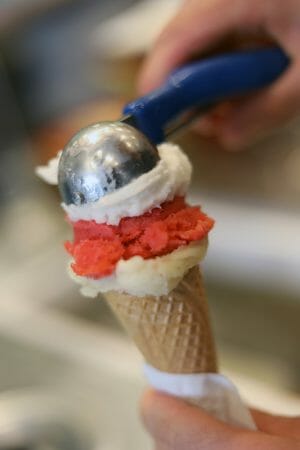 Besides the Cicibebe flavor – based on the Turkish version of the biscuits for infants we still secretly love – we were intrigued by tahini, one of many options listed above the counter. And while we love the richness of ice cream, Yaşar usta’s specialty is in fact sorbet: born long before the vegan food trend, his contain only fruit and sugar, and are strictly made with seasonal products. Since it’s summer, fresh cherries and strawberries from Dikili – a town on the Aegean coast close to Izmir – are mixed with sugar to become a juicy-looking and tempting sorbet.

Furkan, one of the young men working the counter, handed us a two-scoop cone of this delectable fruit sorbet, which melted in our mouth and didn’t sit too heavily in our stomach. “We never use artificial stuff,” he said. “Even the cones are made of all-natural ingredients.” As he told us more about the shop, we found ourselves somewhat surprised by his passion for ice cream, especially given his young age. But, according to him, he is just one of many disciples of Yaşar, the usta (or “master”) behind the name, and suggested that we visit the original branch in Bostancı to meet the real guru in person and learn about his ice-cream art.

It wasn’t not long after sitting down with Yaşar usta for a chat on the patio of his ice cream parlor in Bostancı that we understood the source of his young employee’s passion. “I am the first to arrive and the last to leave,” said Yaşar, a supernatural energy exuding from his animated face. “I’m a strict and harsh teacher, I know,” he explained, “but I need my workers to be well-trained and to have my same work ethic.”

His ice cream empire – YUSDO, the official name of Dondurmacı Yaşar Usta, which has branches all over Istanbul – is even more impressive when you consider that he built it out of nothing. “When I was six-years-old, I had no one. I used to sleep under the Mimar Sinan bridge here in Bostancı, on a bed I made out of hazelnut shells,” Yaşar, now in his 70s, recounted as he handed us a cup of his ice cream. “I started learning the ice cream profession from an Albanian master, in the back of a butcher shop in the neighborhood. At the time, we had no fancy machines: it was all about the recipe, the right mix of the best ingredients.”

Esin, an elderly woman living close by, came into the shop while we were chatting and immediately joined the conversation. “I was married, I had a kid, and I noticed this little guy sleeping under the bridge. I figured he needed some help and decided to give him our car keys so he had somewhere warmer to stay. We basically adopted him, even though he never, ever asked for help. He was always this enthusiastic,” she explained. “I was abroad in the ‘60s, when I heard he had started his business, and I cried with pride for him.”

The use of all-natural ingredients and the lack of additives are the twin secrets to his delicious sorbets and ice creams.

In fact, Yaşar usta’s dondurma shop has been a success since he first opened his doors in 1962. The use of all-natural ingredients and the lack of additives are the twin secrets to his delicious sorbets and ice creams, which he has long sold for very affordable prices – especially compared to other famous chains in Turkey.

He began expanding into other Istanbul neighborhoods 20 or so years ago; it was around this time that he invested in a few larger production spaces, which are now managed by his son and are where the majority of the ice cream sold in his shops is made. While Yaşar usta remains dedicated to the recipes that first made him famous, his continued success in other locations is also a result of hiring the right people.

“You can’t keep or improve the quality of your products and your service if you don’t teach discipline and honesty to your collaborators,” he told us while glancing back at his three employees working the counter, ready to seize on any imprecision. “But there’s something you can’t teach, and that’s passion. When I talk to someone who wants to work with me for the first time, I can look for [this passion] in their eyes. And if they don’t have it, I prefer not to have them.”

Yaşar usta is meticulous not only when it comes to selecting employees but also when it comes to the nuts and bolts of ice-cream making. As he showed us around one of the small labs where some of his ice creams and gelatos are produced, our eyes were drawn to the spotless ice-cream machines, which still look brand new even though they are in continuous use. 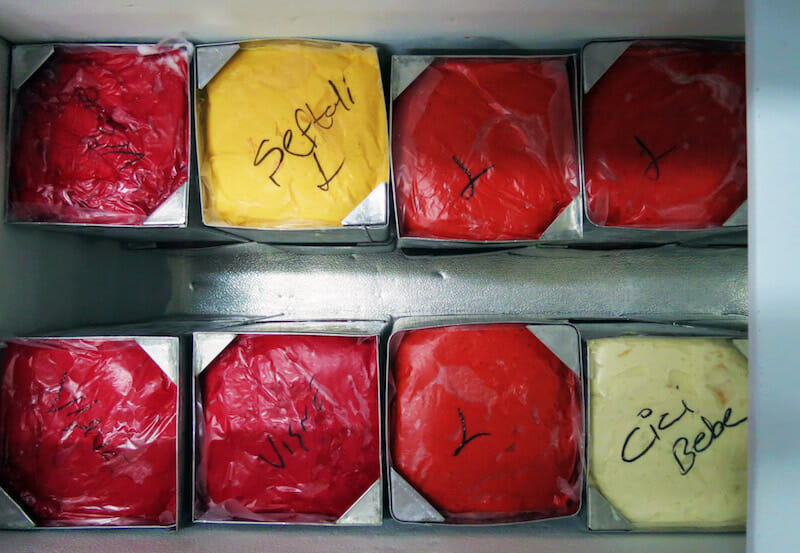 “These babies are over 15 years old. I treat them like my children. I am not the type of person who likes to throw stuff away when it breaks; I’d rather treat everything so well that it doesn’t even [break] in the first place,” Yaşar said while explaining the steps required to make ice cream. Steel containers of the almost-final product – a mixture of sugar and mashed fruit for the sorbets, with the addition of pasteurized milk for the ice creams – neatly sat side-by-side inside the refrigerators, with labels indicating their flavors.

Yaşar has built a loyal fan base over the years, not just with his delicious ice cream but also with his dedication to his customers, whom he considers to be family. “When I get positive comments from people, I’m pushed to do more and more to give them the best,” he said.

As we dug into the bottom of our cup, scraping together one last spoonful of yogurt ice cream and peach sorbet, we couldn’t help but be impressed by this resourceful man and his rags-to-riches story.

A friend called him towards the end of our visit. When he mentioned that he’s showing his brand new friends around, she asked to speak to us and said enthusiastically, “Look, his ice cream is so good that when my husband is on his way home, I’m like, ‘If you don’t bring some ice cream from Yaşar Usta, you better not come home at all!’” It’s possibly the sweetest threat we’ve ever heard. 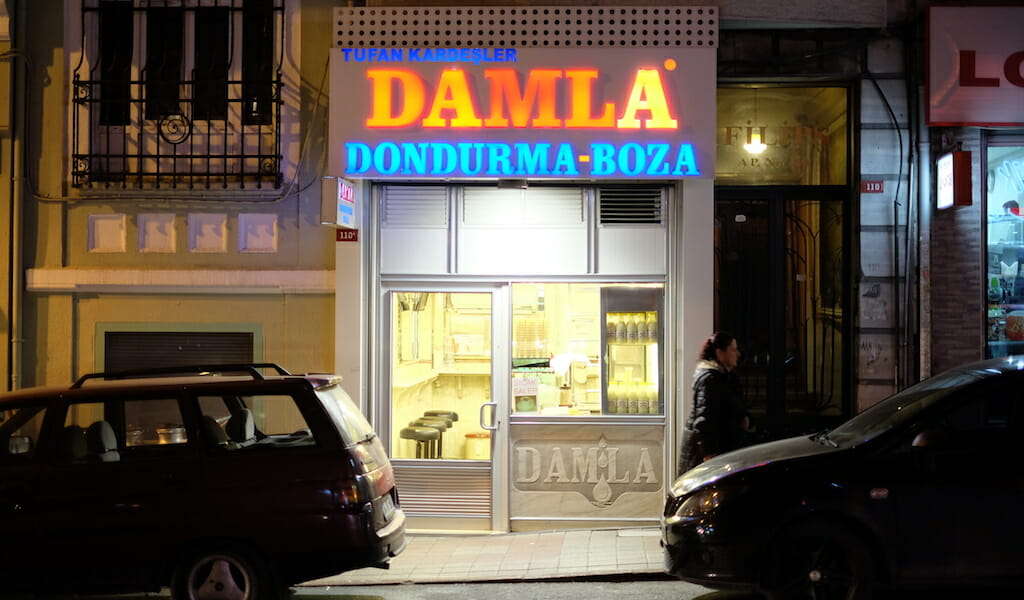 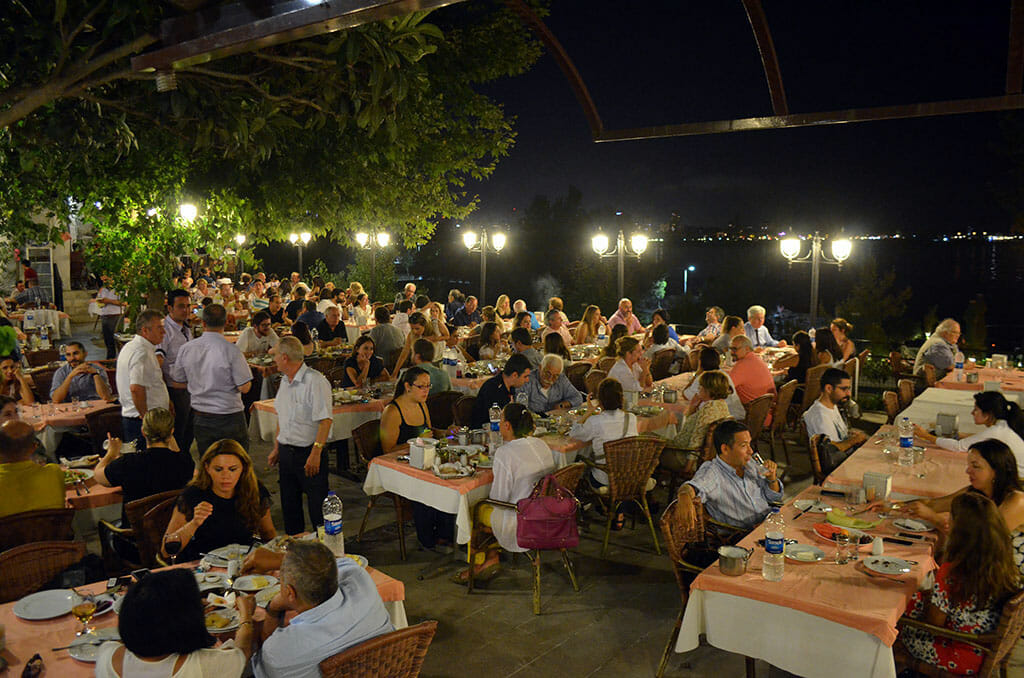 Istanbul | By Culinary Backstreets
By Culinary Backstreets
IstanbulEditor's note: In the latest installment of our recurring feature, First Stop, we asked chef Somer Sivrioglu of the Sydney restaurant Efendy where he stops first for food when he returns to his hometown of Istanbul. Sivrioglu is the chef and owner of Sydney's popular Efendy restaurant and the recently opened Anason mezebar in Barangaroo. He… 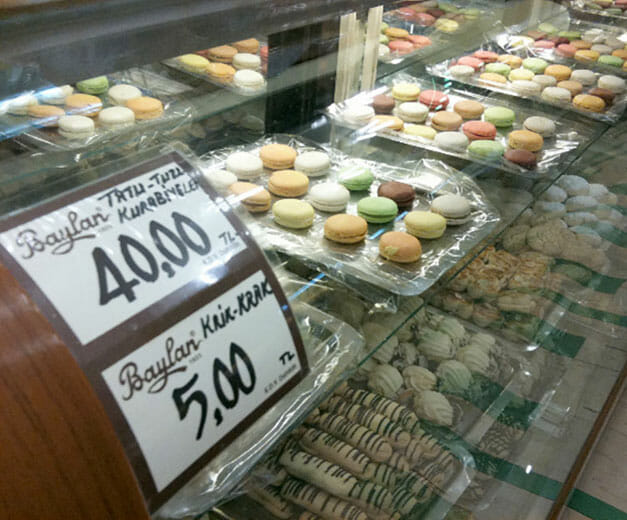