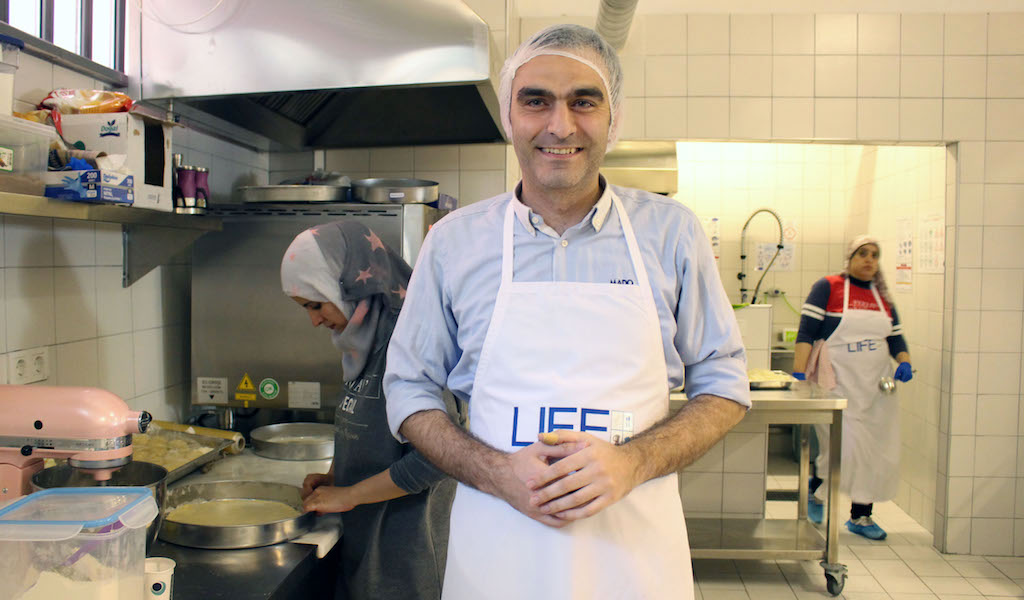 In happier times in Aleppo, a sweet drink called sharab al-louz – made with almond extract, milk and sugar – was a staple at celebratory events such as engagement parties and weddings, Ammar Rida recalls. That was before he had to leave his job as a lecturer at the University of Aleppo and flee Syria lest he be conscripted to fight in the war that has been ravaging his country for the past seven years.

Today, Rida, a serious man in his late thirties with short salt-and-pepper hair and a stubbly beard, is working to establish a business selling sharab al-louz and other healthy, natural drinks – some traditional to Syria and others he is developing based on his background in food science – at restaurants in Istanbul.

Making and selling drinks wasn’t what Rida had in mind when he first sought refuge in Turkey, as more than 3.6 million other Syrians have done due to the ongoing conflict.

“I went all around Turkey looking for a job, knocking on doors in Gaziantep, Şanlıurfa, Bursa, but it is very hard for people, especially those who have degrees, to find opportunities,” Rida says. “Most of the jobs for Syrians are in sewing factories.”

Under a law passed in 2016, Syrian refugees in Turkey have the right to obtain work permits and become legally employed, but as Rida found out, that process isn’t always easy.

“There are issues of language, bureaucracy and getting recognition of your professional credentials that can make starting your own business a more attractive alternative for some people,” says Omar Kadkoy, a Syrian-born research associate at TEPAV, the Economic Policy Research Foundation of Turkey. Analysis by TEPAV based on data from the Union of Chambers and Commodity Exchanges of Turkey (TOBB) shows that Syrian entrepreneurs invested 203.5 million Turkish Liras (around US$39.5 million) to establish 1,248 companies in Turkey between January and September of this year. 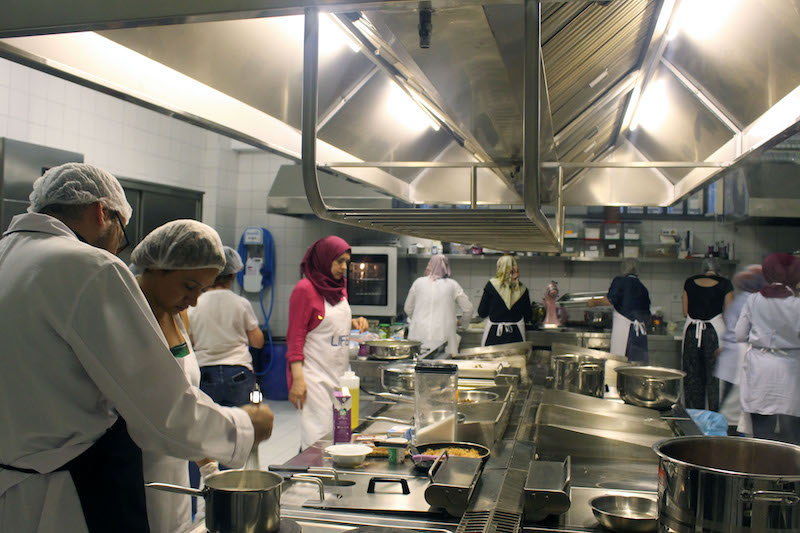 Starting a business has its own challenges, of course, especially for a first-time entrepreneur like Rida. But he and dozens of others are receiving a helping hand from the Livelihoods Innovation through Food Entrepreneurship (LIFE) Project, which provides training and support in Istanbul to people wanting to enter the food sector in Turkey. (Culinary Backstreets co-founder Yigal Schleifer is on the LIFE Project’s advisory council.) Launched in September 2017 by the Washington, D.C.-based nonprofit Center for International Private Enterprise with backing from the U.S. State Department and other partners, the LIFE Project aims to graduate five cohorts of some 200 would-be entrepreneurs, including Syrians, Yemenis, Iraqis and members of other refugee groups, as well as Turks. The project, which is currently funded to run through next August, is also developing a training center in southern Turkey’s Mersin.

Participants receive 60 hours of training in Arabic or Turkish over a four-month period on topics such as marketing, legal issues, food safety and financing. They have access to a commercial-grade kitchen to test out culinary ideas, to mentors who help them refine their business plans to suit the Turkish market, and to a network of potential investors and supporters through periodic “gastrodiplomacy” events. The winners of a business pitch competition in each training group also receive a small sum of seed money to help get their projects off the ground. (A separate two-day vocational course run by the LIFE Project for restaurant workers offers the chance for up to 1,000 people to receive certificates in food safety and hygiene from the Turkish Ministry of Education.)

“The training program teaches the basics of entrepreneurship and helps connect the participants to people in the food sector in Turkey,” says Motasem Abuzaid, one of the LIFE Project’s Arabic-language trainers. “But it takes a real passion and desire to be an entrepreneur to be successful, someone who has a risk-taking attitude and is ready to invest the time to make their idea work.”

“It’s important that Turkish people see refugees not only as people who need help, but also as people who have ideas they can contribute.”

Another LIFE trainee from Syria, Fatima Shehirli, was living happily with her family in the coastal city of Latakia before the war broke out. Shehirli worked as a guidance counselor at a private school, her husband had his own auto body shop, and their three children were all enrolled in school. That all changed after the conflict started.

“There were many checkpoints we had to pass every day. They kept stopping my son and trying to take him away to military service,” Shehirli recalls. “At my daughter’s school, some students were being taken out of their classrooms for making small protests. Some were never seen again.”

“We decided to leave Syria and sold our car to get the money to go to Turkey,” Shehirli says. “We had a house and other possessions but we couldn’t sell them because then the government would know that we were planning to leave.”

Back home in Latakia, Shehirli made her own organic food products to cook with and sell: the spice blend za’atar, traditional Syrian pastries, carob molasses. With her LIFE Project training, she wants to start a store and workshop where people can buy natural ingredients and pre-made dishes, and learn about healthy food substitutions and medicinal uses for plants.

“I don’t have the resources yet to open this shop, but I’m working with an organization that gives courses to mothers and children on healthy food, and I’m starting to take orders from my local community for homemade healthy dishes,” says Shehirli, who also works as a teacher in Istanbul. “The LIFE Project helped me learn about Turkish law and markets, how to get certified and where it might be best to open a store in the future. I already had this idea, but they helped it evolve and become more realistic.”

By bringing together people from various backgrounds around the common language of food, the LIFE Project aims not only to help aspiring entrepreneurs succeed, but also to improve social cohesion between refugees and their host communities, a relationship that can sometimes be fraught. 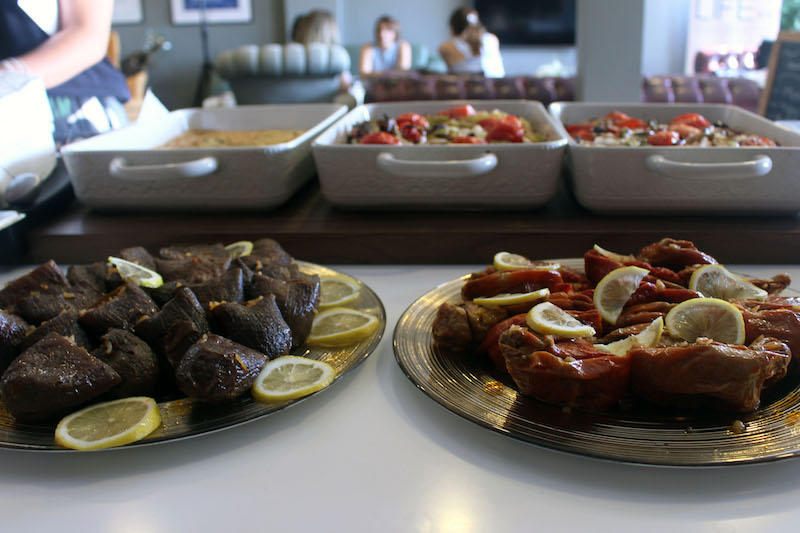 “It’s important that Turkish people see refugees not only as people who need help, but also as people who have ideas they can contribute,” says Anna M. Beylunioğlu, a chef, political scientist and food history researcher who is one of the LIFE Project’s volunteer mentors. “We talk a lot about food and exchange recipes. One of the things I’ve learned from the participants was a twist on sarma [a dish of stuffed vine or cabbage leaves made in Turkey and the Middle East]. When they said they use coffee as a spice in that, I was surprised, but I tried it at home, and it really worked well.”

Both the recipes and the stories of some of the LIFE Project participants will be published in a forthcoming cookbook that is being coordinated by Turkish culinary expert Filiz Hösükoğlu. She says she’s seen “wonderful food friendships” develop in the LIFE Project kitchen as people cook together and learn about new techniques and dishes, such as the dried onion flakes used as a spice in some Yemeni recipes, or the polenta-like aseeda, also from Yemen. “It’s made from corn or wheat flour, cooked with the water added in gradually, and has a texture like semolina halva, but it’s not sweet,” Hösükoğlu says. “It’s served with meat stew in the place of rice.”

“When you’re around the table, food brings people together. In the same way, when you read a recipe, you get connected with the person who wrote it, and with their food,” Hösükoğlu says. “What makes this project special are the stories around the dishes, and the chefs’ personal stories, which show their will to survive.” 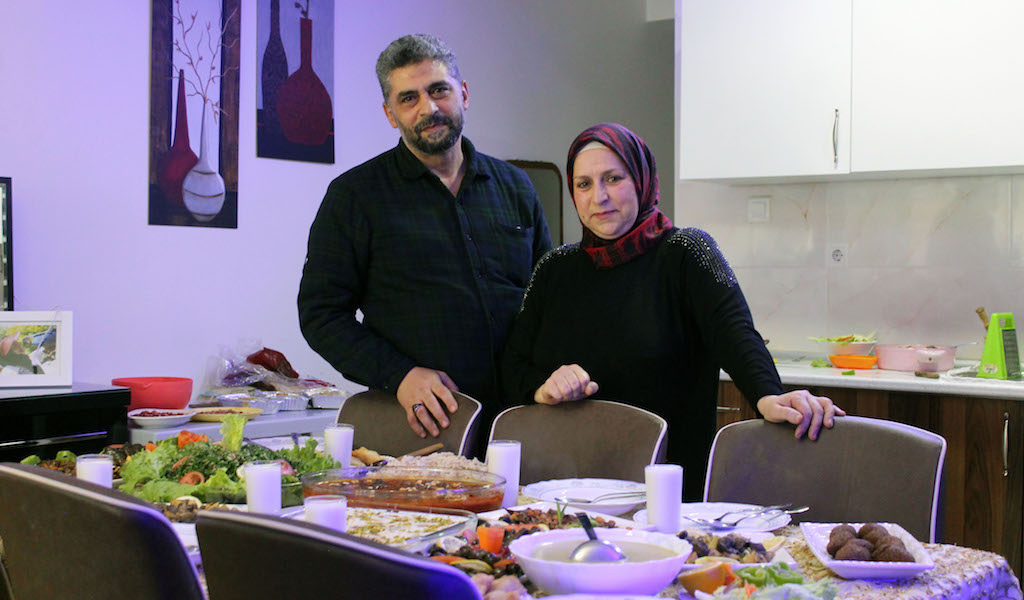 Istanbul | By Dima Al Sayed
By Dima Al Sayed
Istanbul -- While home cooks preparing food for their families are revered and restaurants occupy an important place in the social fabric, food businesses run out of individual homes often carry negative connotations in Middle Eastern societies. Many would assume that the person making these meals is jobless, uneducated, in dire need of money, or… 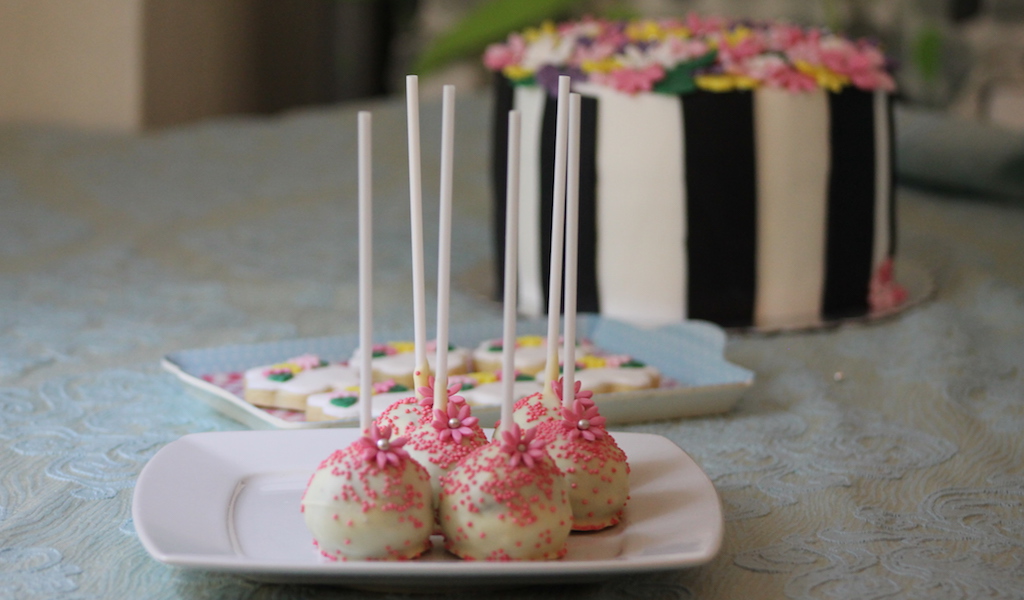 Istanbul | By Dima Al Sayed
By Dima Al Sayed
Istanbul -- Like most Syrians who fled their war-ravaged country and made their way to Turkey, Fatma Jabal, a 19-year-old from Aleppo now living in Istanbul, had to get creative in order to make a living. With a baby boy to take care of and her husband struggling to provide for their family while working as a… 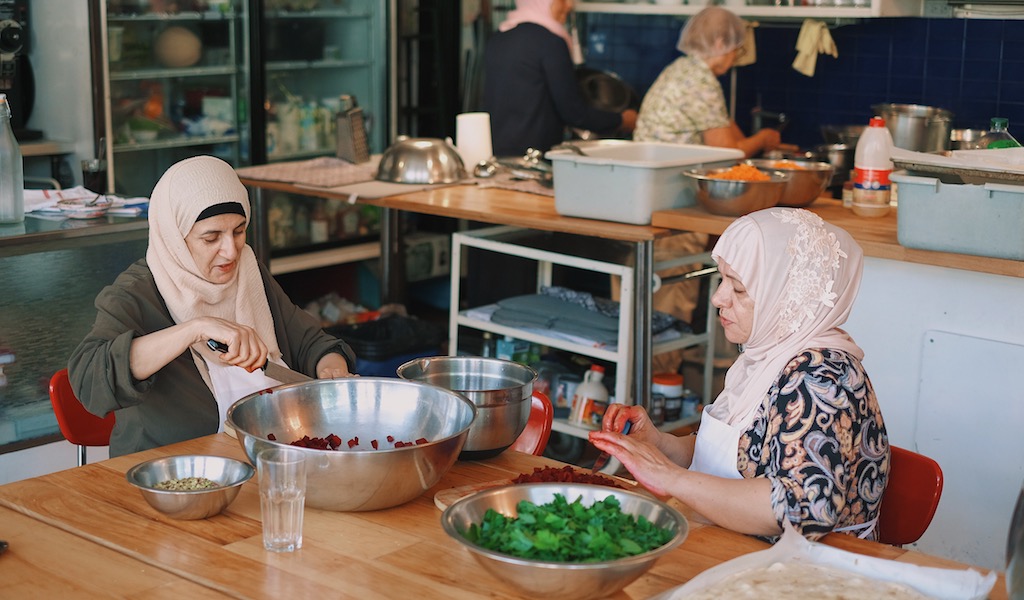