From the street, Café Lamas looks almost intentionally nondescript. A fluorescent-lit bar with a glass case of snacks and a few metal chairs would make it identical to any other lanchonete (snack bar) across the city, if it weren’t for the shadowy doorway behind the bar’s aisle.

Behind that door awaits a blast from the past. Café Lamas is Rio de Janeiro’s oldest restaurant – a respectable 138 years old in a city that is rapidly putting on a new face as it buzzes with Olympic, hotel and condominium construction – and the place radiates a sense of history and tradition. Bow-tied waiters politely bend as guests enter the dining room, which is dimly illuminated by lamps on ornate cast-iron mounts. Frosted lettering on mirrors around the dining room promotes the “new delicious Lamas dessert,” which proud co-owner Milton Brito admits is actually no longer new. An all-white statue of a curvaceous woman wrapped in the Brazilian flag sweetly smiles down on diners from one wall. The statue was once colored the green, yellow and blue of the flag, until a member of the military visited Lamas during the 1964-85 dictatorship and demanded that the colors be removed. “He thought it was somehow against the national flag,” explained Brito.

The Brazilian Communist Party held its meetings in Lamas during the same period, as did many of the first members of Brazil’s now-ruling Workers’ Party. That’s because Lamas was a rare venue that stayed open around the clock. “It was always frequented by artists, journalists, writers, businessmen, university students,” said Brito, adding that being open 24/7 made it a place Rio’s all-night carousers could set as a fail-proof location to meet up with friends. “Because it didn’t close, everything happened at Lamas.”

In 1976, the construction of the metro forced the restaurant to move to a new location about two blocks away. “People said, ‘Lamas had to accept progress,’” Brito said of the eviction. While the original Lamas hosted all-night pool tournaments and drinking contests, the newer location seems to have tamed its old capacity for vice, closing at a more “respectable” 3 a.m., with some black-and-white photos on the wall the only evidence of the former pool hall. And while Lamas may have once been a Communist Party stronghold, its menu prices today are far from proletarian. Indeed, as Brito is proud to note, the restaurant’s eclectic mix of distinguished guests has included Walt Disney, 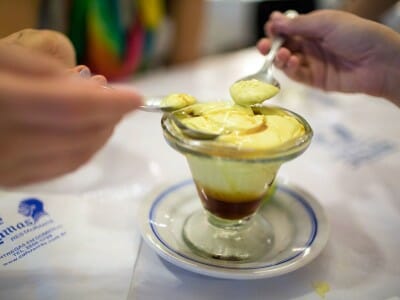 Bianca Jagger and current Supreme Court justice Joaquim Barbosa, seen as a national idol for taking a hard line against Workers’ Party politicians involved in a corruption case called the mensalão, or the “big monthly payoff.”

As for the food, keep in mind this dica (tip): traditional Brazilian cuisine is first and foremost about fellowship. Heaping portions are meant to be shared among several diners. Though artesanal dishes with small portions and attention to detail are increasingly popular in Rio’s chic contemporary eateries, to old-time cariocas (like the ones who run Café Lamas), this trend is just a little too individualistic. Cariocas also often value pure ingredients over spice, meaning that Lamas’s menu leans heavily in a meat-and-potatoes direction.

Yet there are Lamas dishes that will grab the attention of even a well-traveled eater. The molho de alcaparra, a buttery sauce with capers and parsley, is a Portuguese-influenced side dish that makes a rich dip for the cebola frita, fried onions, or the batata portuguesa, which is a bit like a thick potato chip. The filé à Osvaldo Aranha – a filet mignon au jus covered in crispy toasted garlic bits – is named for a well-known early-20th-century politician, diplomat and crony of controversial president Getúlio Vargas who took his beef this way at Lamas.

Café Lamas also stands out for its fine selection of domestic and imported bottled beers – a rarity in a city that gets its kicks from a pale draft beer called chopp. Índica, a crisp India Pale Ale made by Brazil’s Colorado brewery, is a refreshing palate cleanser between rich courses. For dessert, a must-try house specialty – found nowhere else in Rio – is the creme de abacate com licor de cacau, a moussey avocado ice cream drizzled with cacao liquor and 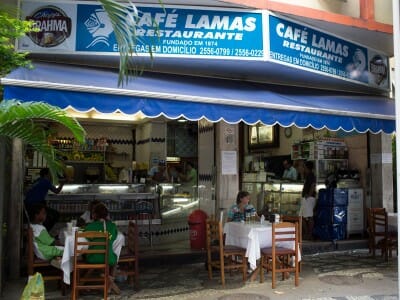 garnished with a lime wedge (cariocas treat avocados as a sweet). Another quintessentially Rio dessert is the goiabada com catupiry, guava paste served with a slightly salty white cheese.

A gringa friend in Rio, initially overwhelmed by the large portions of meat-centric plates and heavy sauces, told us she came to understand the local approach to dining when someone gave her the following dica: Think of eating a traditional Brazilian meal as “laying bricks” – consuming heavy, hearty food to build up strength before a long day at work. At Lamas, part of the fabric of Rio de Janeiro, cariocas have been happily laying those bricks for decades.

This review was originally published on June 6, 2013.