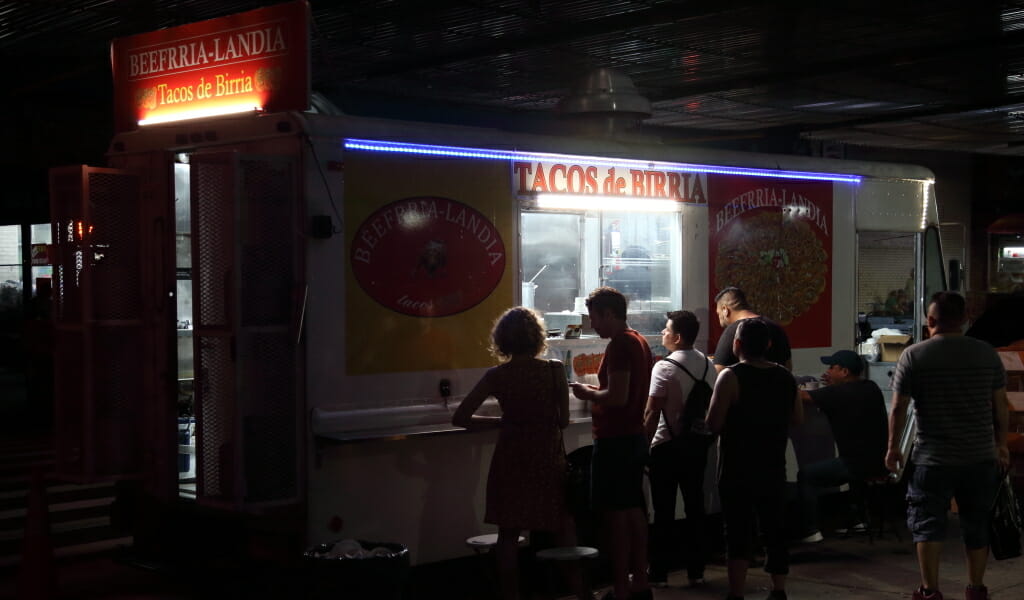 By Dave Cook and Ike Allen

Location, location, location is a familiar mantra of New York real estate; invariably it comes to bear on restaurants and other food businesses, too. When e-commerce giant Amazon decided not to build a second headquarters in Long Island City, many food vendors were disappointed, sometimes bitterly, at the loss of a possible 25,000 new customers. With an eye on the lunchtime rush just across the Hudson River, in Manhattan, they wondered, why not in Queens?

By contrast, continual development in Flushing, albeit on a much smaller scale, continues to displace many small businesses. The food stalls in the lower level of the celebrated Golden Mall shuttered in late summer for a renovation that was planned to last several months; it seems nowhere near completion. On and around Main St. and Roosevelt Ave., a major hub for mass transit, a noon-to-midnight ban is enforced on street vendors, both of merchandise and food. Spicy lamb skewers are what we miss most. We’ve also heard of a similar if sporadic squeeze on street-food vendors near Junction Blvd., in Elmhurst, under the elevated 7 train.

Queens sprawls far and wide, however, and the boundaries between the too-congested and the too-remote are ever-changing. These borderlands are fertile ground for budding food businesses – if only we could visit them all. 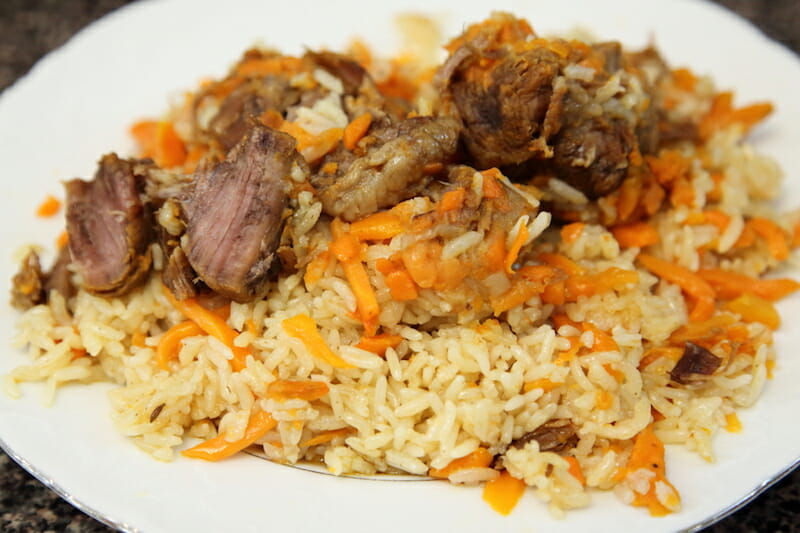 Our plov was unlovely. For a group lunch at Ganey Orly – a Bukharian restaurant, serving kosher food from Central Asia – we’d needed to reserve the rice dish a day earlier. We ordered many more dishes at the table, including plump manti, juicy kebabs and an exuberantly garnished chicken tabaka.

Many of these à la minute dishes were photogenic as well as delicious (I don’t recall any leftovers), but looks are often less important than long-cooked flavor. Despite the heaped-on-a-plate presentation, this plov was exceptional, and the beef was particularly tender. Considering that the dish must be ordered in advance, we were grateful that the kitchen had prepared enough for a second portion. 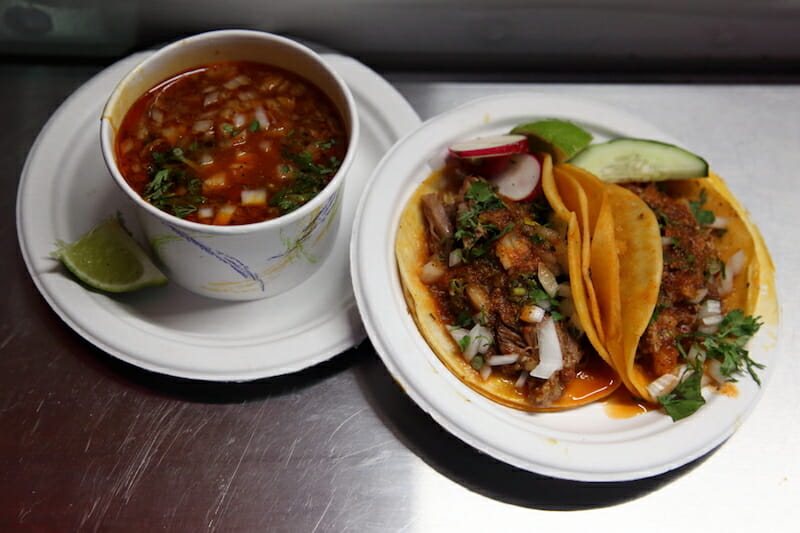 To dunk or not to dunk? Long before I’d stepped up to the window of this food truck, I’d heard two takes on how best to eat Birria-Landia’s beef-stew-topped tacos. One contingent recommended immersing the taco, bite by bite, into a side order of consomé; the other favored spooning consomé over the taco all at once. Both approaches worked just fine, I found, provided that plenty of napkins were close at hand.

Thanks to the spicy birria, however, the tacos are very moist without any further attention. But I also enjoyed the beefy consomé for its own sake – and it’s much, much easier to carry away and eat on the go. 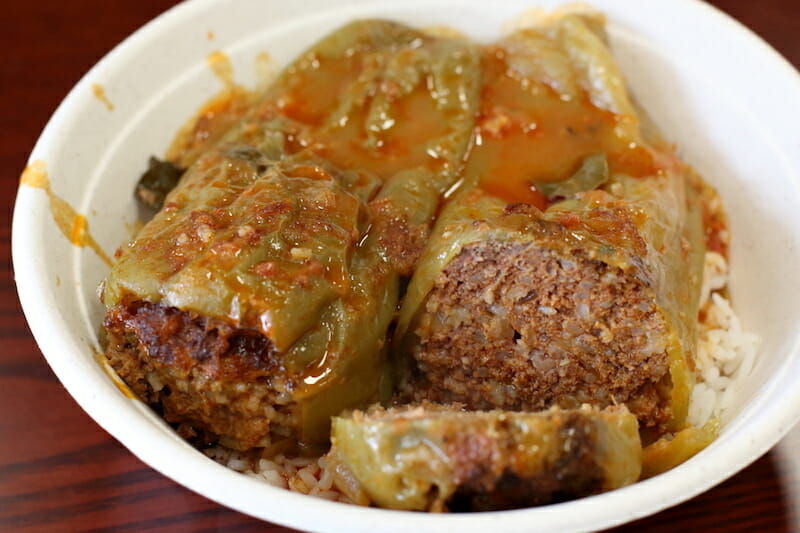 I’d planned on a Chino-Venezolano lunch, but at my intended destination, the doors were shuttered. (Extended sabbatical? Permanent vacation? It’s still unclear.) For situations such as this, I always bring backup – a custom map, accessible on my mobile phone, that pinpoints the many places on my to-eat list. Teta’s Kitchen, a counter-service Middle Eastern restaurant, was just around the corner.

The flowers at my table were fresh, the food on display, fresher. An improbably young-looking teta (“grandma,” in Lebanon) used her ladle to plumb the depths of what looked like terrific chicken soup, but counseled me against a dish I could order any day. Instead she steered me toward a special, beef-stuffed peppers, that I’ve always associated with Eastern Europe – though of course stuffed vegetables are common to many cultures. I’ll bet that Teta’s stuffed grape leaves are good, too. 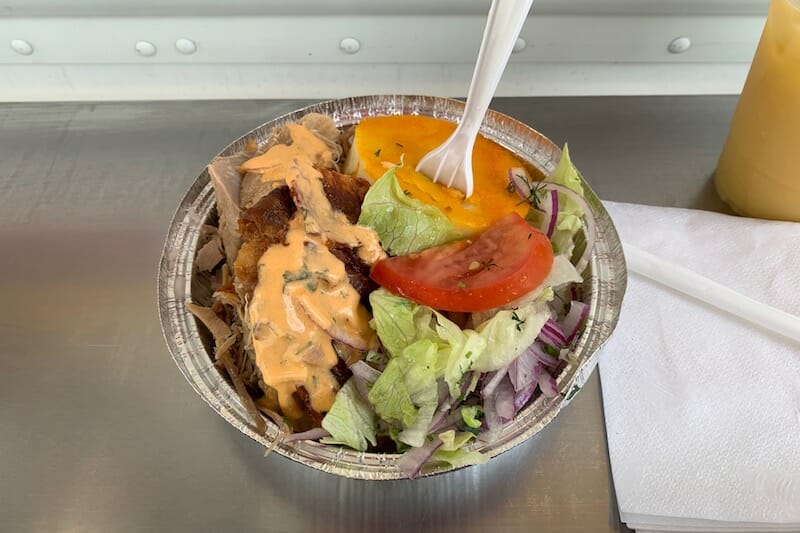 The borderland between Jackson Heights and Corona is really the Ecuadorian street food district, and the intersection of Warren St. and Roosevelt Ave. in particular might be the best place to get to know this unsung cuisine in Queens. The corner comes alive at lunchtime, when food trucks and carts put out rows of plastic stools, transforming the sidewalk into an ad hoc lunch counter. Though there are at least half a dozen purveyors of fritada (fried pork), morocho (a spiced corn drink), choclos (full ears of corn), morcilla (blood sausage) and more around Warren St., Pique y Pase Pepin probably serves the best hornado (Ecuadorian roast pork) in town.

In the mountain markets of Ecuador, hornado usually means a whole roasted pig, but Pepin, in what is probably a more sensible choice for a food truck, carves up servings from a roast pork shoulder wrapped in tin foil. Besides that, their hornado is strictly traditional: served on a bed of white rice and accompanied by one llapingacho, a kind of Andean potato croquette. Pepin also includes an iceberg salad, dressed with plenty of vinegar and red onions, which provides a necessary contrast to the plate of rice, pork and potatoes. The pork itself is also a study in contrasts, though: tender chunks of shoulder meat are mixed in with crisp wafers of skin, all of which you can dress with a zippy ají pepper sauce that contains plenty of minced herbs. None of its constituent parts – pork, potatoes, rice, iceberg lettuce – are all that special, but the hornado at Pique y Pase Pepin is a dish that transcends its simple ingredients.

For a truck, Pepin serves an impressive array of labor-intensive traditional Ecuadorian dishes, from the oniony fish soup encebollado de pescado to guatita, a peanut-rich tripe stew. Every time we’ve returned, though, the hornado sitting there wrapped in foil has been too tempting to stray from. 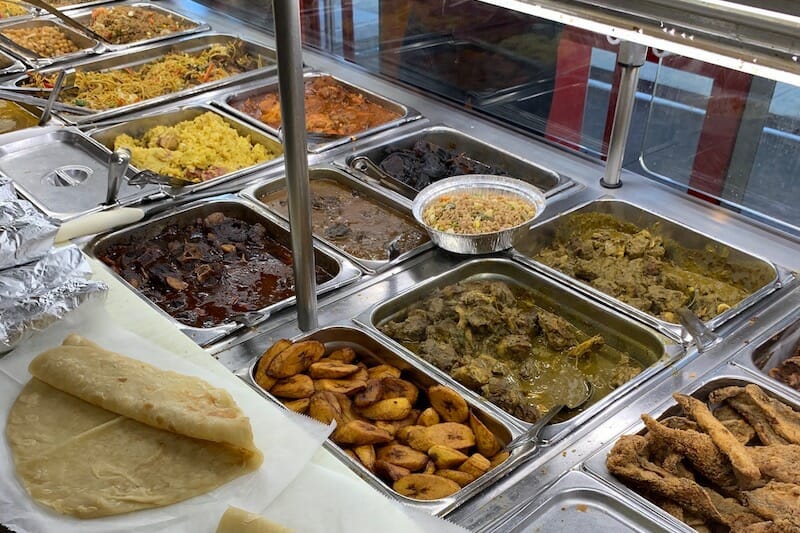 There’s usually a line at Sybil’s, and often a row of cars double parked on busy Liberty Ave. as customers run in to buy specialty Guyanese bread, sweets, roti and curries. Sybil’s is clearly one of the most popular establishments among the nearly 100,000-strong Guyanese population of Queens. “We have a lot of items here that I don’t think any other Guyanese outfit in New York has,” says owner Viburt Bernard, known to locals as Cookie.

As Christmas approaches, the crowds at Sybil’s are especially interested in one thing: pepperpot. A classic holiday dish in Guyana, pepperpot is an inky braised meat stew enriched with cassareep, a molasses-like sauce made from boiling cassava juice down for hours. Though it tastes like a heavily-spiced version of the beef stew my Jewish grandmother used to make, pepperpot actually originated in the Amerindian cooking indigenous to Guyana. The recipe for cassareep existed long before the descendants of Indian indentured servants and African slaves began to cook pepperpot. It can be made with a variety of meats – Sybil’s uses the classic choice of oxtail – but cassareep really has no substitute. It adds a pungent, nutty dimension to the stew, permeating the oxtail as it cooks.

Cookie points out that it must be accompanied by one of the bakery’s special Guyanese breads, either a fluffy round tennis roll or a chunk of dense plait bread. After he guided us through a huge variety of Guyanese comfort foods, we took an extra container of pepperpot to go. The aroma of spices and cassareep that perfumed the subway car on the way home did seem to suggest Christmas, though it was the middle of summer. 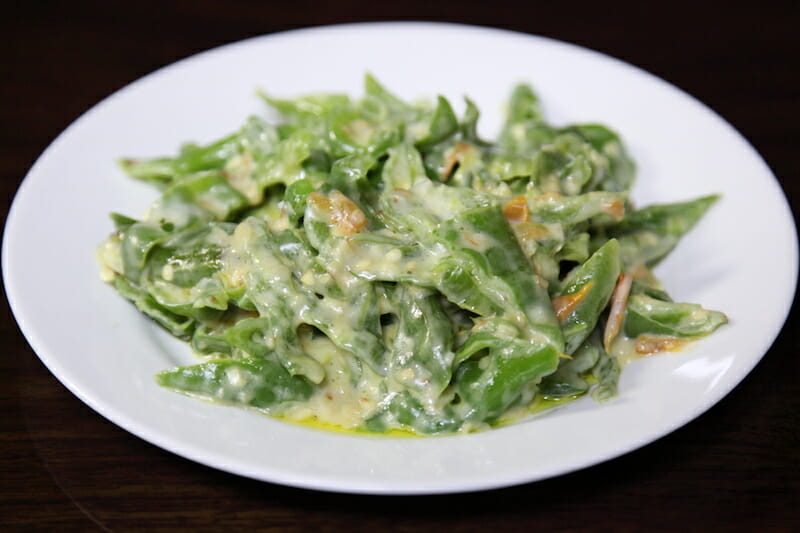 Ema datse, the national dish of Bhutan, is a name which literally means chile con queso – chile pepper with cheese – in Dzongkha, the Bhutanese language. Of the many Himalayan places where you can try ema datse in Queens, the secluded Bhutanese pool hall known as Weekender Billiard may be the most unusual: It’s housed in a nearly windowless space on a side street just off the 7 train, with a low, panelled ceiling, an odd assemblage of faux-leather chairs, and portraits of the Dalai Lama and the young King and Queen of Bhutan adorning the bright orange and green walls. As well as a place to play snooker, Weekender Billiard seems to function as a social hall and post office for the Bhutanese community, with a bulletin board covered in Dzongkha flyers, and one corner of the room piled high with boxes to be shipped to the Himalayas. There’s food, too: At a table across from us one day, a group of sharply-dressed Bhutanese limousine drivers were sipping Heinekens and noshing on ema datse.

The most common version of the cheesy dish is a liquidy combination of green chile slices and yak’s milk curd, but the ema datse at Weekender Billiard is a firmer mass of melted cow’s milk cheese and fiery green peppers. Although distinctly Himalayan, it’s a dish that really would please any fan of its Texan counterpart, queso. The cheese, which is as salty and tangy as aged cheddar, coats each ribbon of chile, shielding you initially from the heat. After a few bites though, it becomes clear the chiles’ seeds have been left in, and a plate of starchy Bhutanese red rice certainly comes in handy. Although its resemblance to southwestern bar food must be coincidental, there was something very familiar and comforting to us about a plate of ema datse chased down with a beer or two, after a good game of pool. 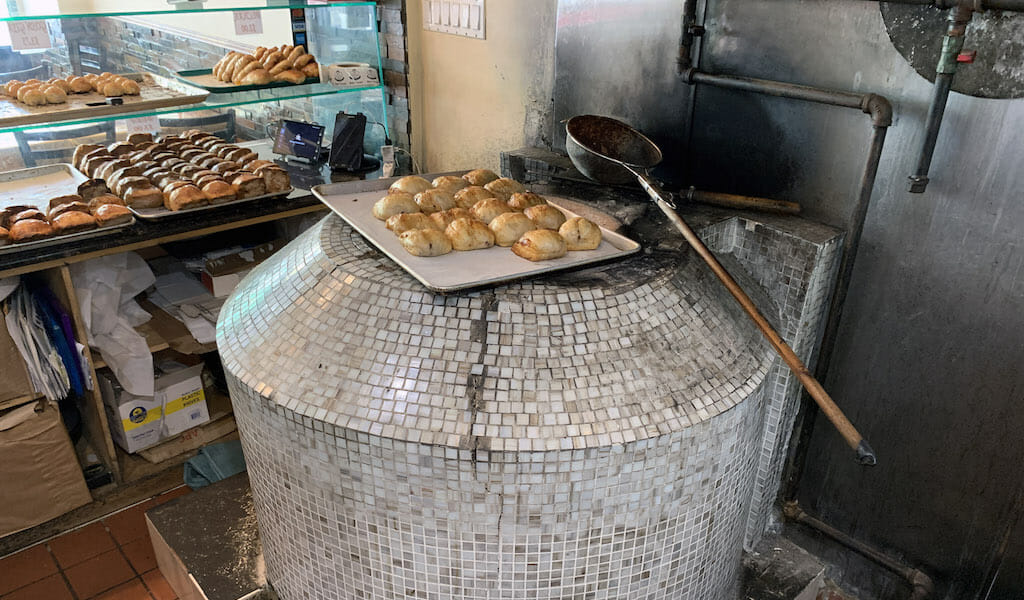 Learn all about the Bukharan community on our Queens trip!

Queens | By Ike Allen
By Ike Allen
QueensChaikhana Sem Sorok, a newly opened little café just off the Central Asian thoroughfare of 63rd Drive in Rego Park, proves more than anywhere else that all cuisines are fusion cuisines, if you go back far enough. Every day but Saturday – the Sabbath – loaves of round, crusty bread called non or lepyoshka emerge… 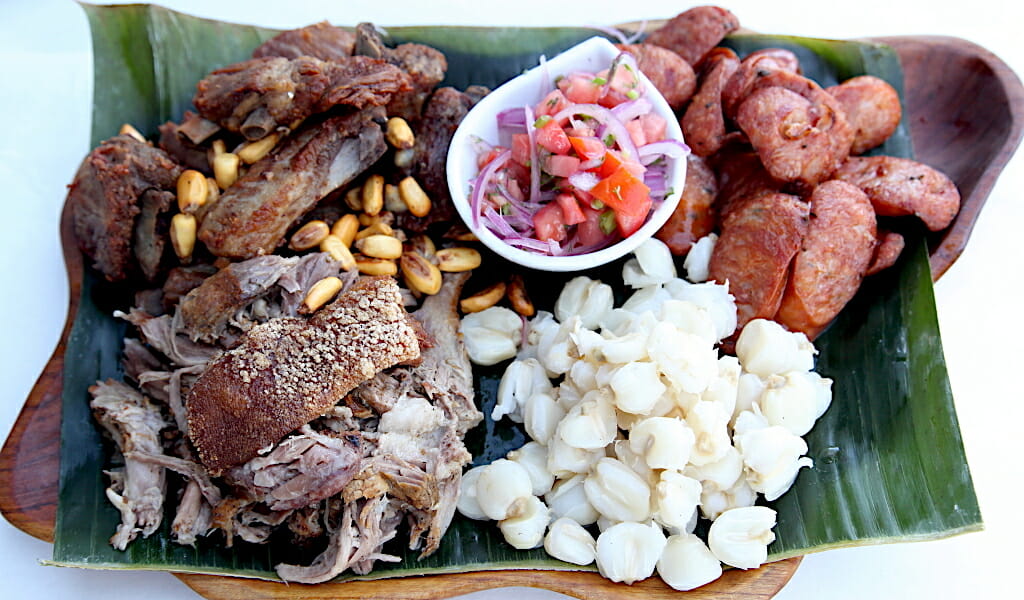 Queens | By Dave Cook
By Dave Cook
QueensOur first encounter with the chaulafan from Leticias, an Ecuadorian restaurant in Corona, was at the 2021 season opener of the nearby Queens Night Market. As it cooked outdoors – in a wok over high heat, a testament to the dish's origins among Chinese immigrant workers – the fried rice was a dramatic sight. Our…