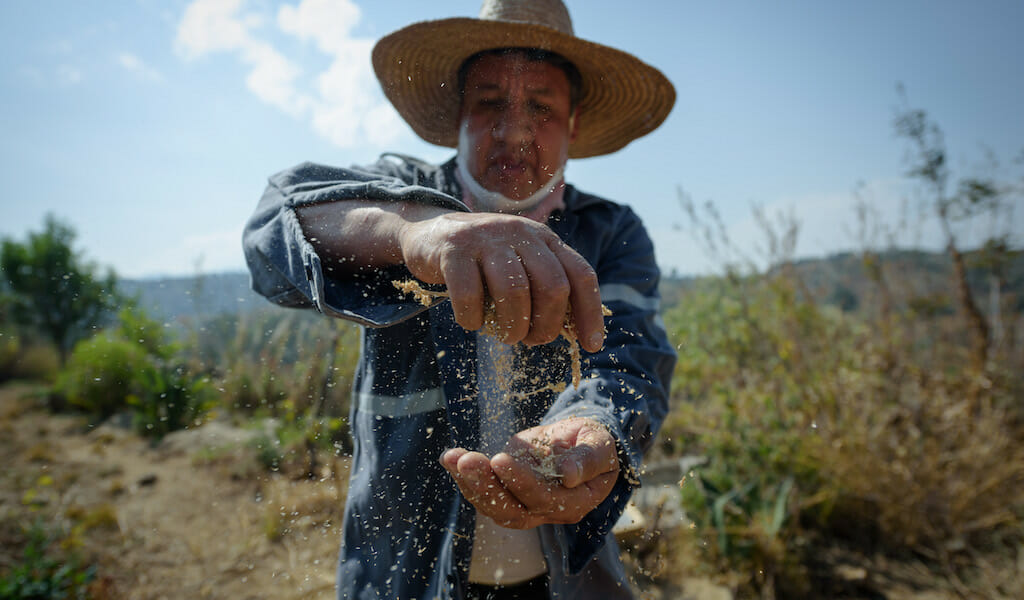 Nodding to a table laid with bars of alegria, rainbow-colored obleas, and packages of churros and chicharrón made with amaranth flour, Alma Rocha says she can remember her grandmother making sweets from amaranth seed, but nothing like the repertoire that she and her husband, Arturo, have now. Everything is shiny and neatly packaged below the D’Alva Productos de Amaranto sign in the cooperative’s workshop, which is located inside the home of 43-year-old Alma and 58-year-old Arturo.

“They taught us [recipes] in a certain sense,” Arturo says, referring to the generations of amaranth farmers that came before them, “And we have tried to modify them. For instance, this one here that we are making now, uses honey [instead of regular sugar], the chocolate one here, that’s local chocolate from Oaxaca. We try to do everything as artisanal as possible. Everything we add – the honey, the chocolate, the amaranth, it’s all natural.” 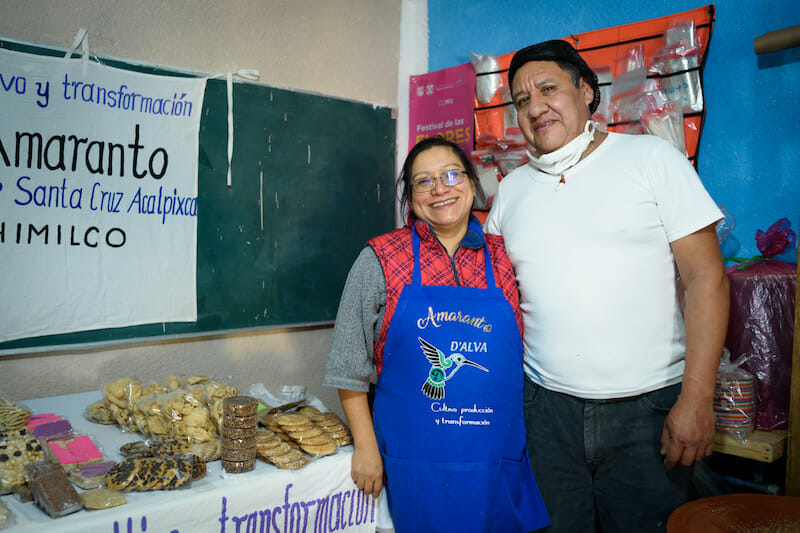 Alma points out her favorites among the selection, handling them with care. They are her babies after all: She and Arturo control the entire process, from planting the amaranth sprouts each spring to the finished product laid out before us, which they normally sell in markets or fairs, or wholesale through their Facebook page.

It’s said that amaranth, often considered a sacred food in Mexico, was used to create representations of Aztec gods that were then eaten to obtain the gods’ power. Outlawed, or at the very least discouraged by the Spanish colonizers for its ritual importance, amaranth crop cultivation was in decline until the 1970s and 80s, when a re-evaluation of the plant for its nutritional properties made it popular once again. These days you will find amaranth mainly in sweets like the ones made by Alma and Arturo, but their leaves are also eaten as a kind of quelite, or wild green.

She and Arturo control the entire process, from planting the amaranth sprouts each spring to the finished product laid out before us.

The Rochas live in Santa Cruz Acalpixca in the southern part of Mexico City. Their neighborhood looks similar to other outlying sections of the city, with low, simple architecture, narrow alleyways and the bustling traffic of the capital whizzing on the avenues nearby. But this family is more country than town – a fact immediately visible entering into their courtyard. A sturdy, open-air stable has been built in one corner that houses a horse named Muñeca, several goats, turkeys, a peacock and half a dozen dogs. Turkey calls and dog barks punctuate our conversation for the rest of the afternoon.

They also have a few hectares of land about a 30-minute drive from their house, where the busyness of the city suddenly gives way to slower traffic and wider spaces. This is where the family grows amaranth, corn and a few essentials for their own consumption, on land that was given to Arturo’s grandmother in payment for the farm work she preformed for the original owner. 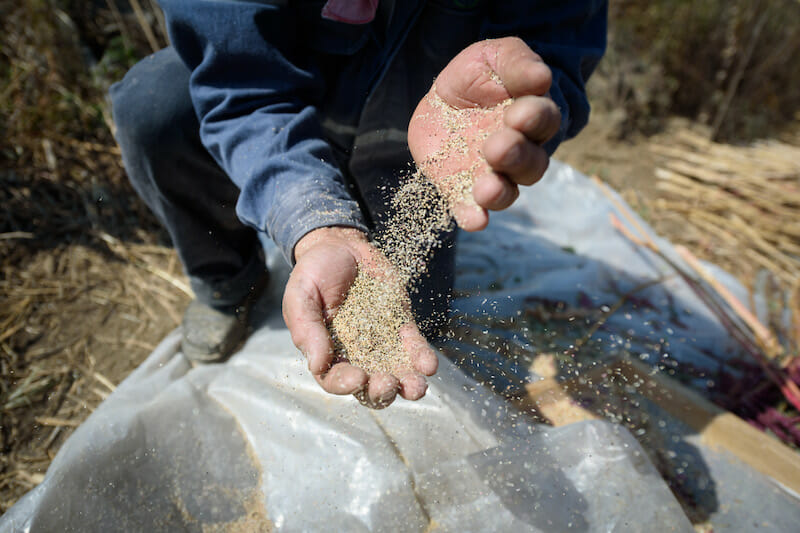 Amaranth requires a painstakingly meticulous planting and collection system. The seeds are sprouted in narrow wooden trays at the beginning of each year. Then in March, the tiny seedlings are planted to wait for the April rains. All summer long the amaranth grows into tall, gangling stalks with bushy tops of striking magenta red and pale green. Around November the plants begin to dry and are eventually cut and laid to dry fully on plastic tarps. 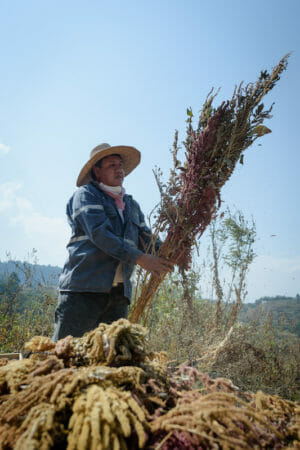 The dried stalks are then gently beaten against a clean tarp, which releases a flurry of seeds, as well as bits of stalk and dust. After that, Arturo says, there are two methods for cleaning the seed. One, using a square wooden sieve, or two, simply blowing over the seeds, which he calls the “wind method” – both rid them of a large amount of dust and stalk. A mixture of white and black amaranth seeds remain, but Arturo tells us that the black seeds don’t pop when toasted and so are easy to separate from the golden seed, which is the main variety that they produce.

Back at the workshop the amaranth is toasted, the seeds separated and then set atop another sieve as Arturo runs his hand through them to loosen any resistant dust particles.

“Big companies just buy [amaranth seed] from anyone and don’t do the cleaning required to make it good,” he says, “I make sure that there isn’t anything left except for pure seed.”

From here, the magic begins, as they craft the toasted amaranth seed into dozens of sweet forms. 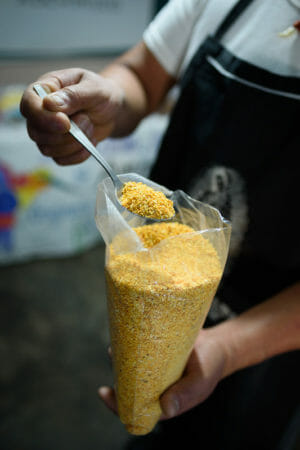 The most common is the densely packed alegria, a kind of pre-Hispanic energy bar with peanuts and dried fruit pressed into its edges. There are also cookies made from amaranth flour and two new inventions by the Rochas, amaranth chicharrón and churros – two common salty snacks in Mexico, the first regularly made from crispy pig skin and the other from corn flour.

By far the most labor-intensive (and beautiful) items on the table are the brightly colored obleas. Made from amaranth flour, the obleas look like half moons whose edges have been dipped in chocolate or honey and then sprinkled with toasted amaranth seed. These slightly-thicker-than-paper wafers are cooked inside a mold over an open fire and come out flexible, much like a tortilla. Their edges are trimmed into a perfect circle and they are left to cool and harden, to be decorated later.

The process requires more hands than Arturo and Alma can supply, and their three children are often recruited to trim obleas, package candies and serve as taste testers.

Pointing to dates covered in toasted amaranth, Alma say, “I gave this one to my daughter and said, ‘What do you think? How did I do?’ ‘Oh mom,’ she says, ‘these are angelic,’ and so that was it, after that we called them angelitos [little angels].” 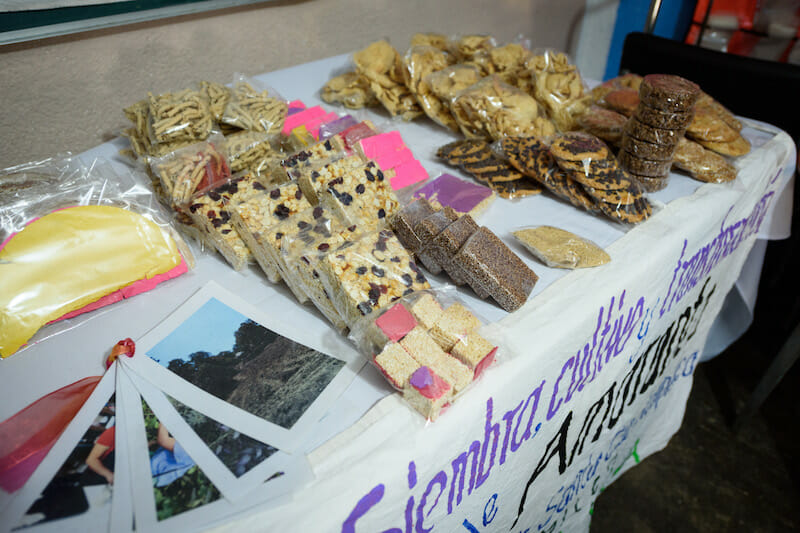 Despite the festive mood in the workshop during our visit, the Rochas explain that 2020 was a quieter year than most. The pandemic has been devastating for their candy sales, and most of the amaranth they grew this year was simply sold as seed. Their farm has been fortunate in that it didn’t suffer any fires this year – a common occurrence – but there has been little rain to fill their water catchment system. They have struggled to support their family and maintain the generations of tradition involved in their work. Like many artisans and small producers, theirs is not an easy enterprise, says Arturo, but it is a fulfilling one.

“I tell my girls even though you might be a professional, or have your degrees, you’re still going to learn how to make everything from an oblea to a bar,” Alma interjects, “because then maybe later, even if they marry and have their own kids, all this – the flavor of the land – won’t be lost.”

If you’re in Mexico, you can order Alma and Arturo’s amaranth delicacies from their Facebook page. If you’re outside of the country and want to get a taste of amaranth, our Backstreet Mexico City Box includes a package of alegrias, among other items. Order here. 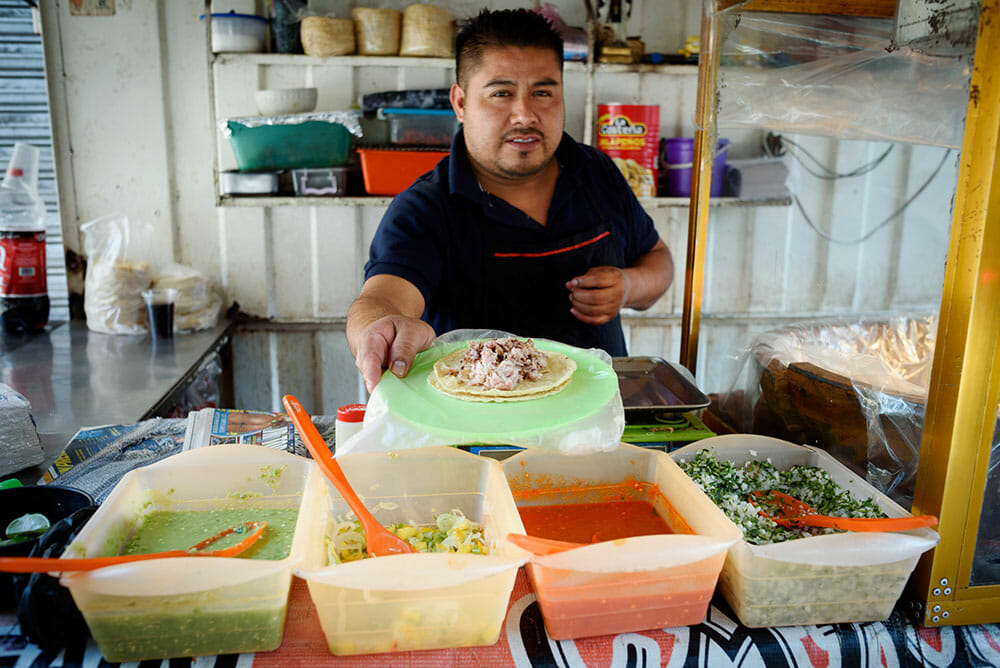 Culinary Secrets of the Centro Histórico

Mexico | By Developer
By Developer
MexicoQuick Bite: On this food tour we’ll seek out the hidden gems of Mexico City’s famous historic district, uncovering them layer by delicious layer. The area encompassing the Centro Histórico, Mexico City’s oldest quarter, has been the metropolis’s beating heart for some 700 years; it’s a neighborhood of countless historical layers. This is where the… 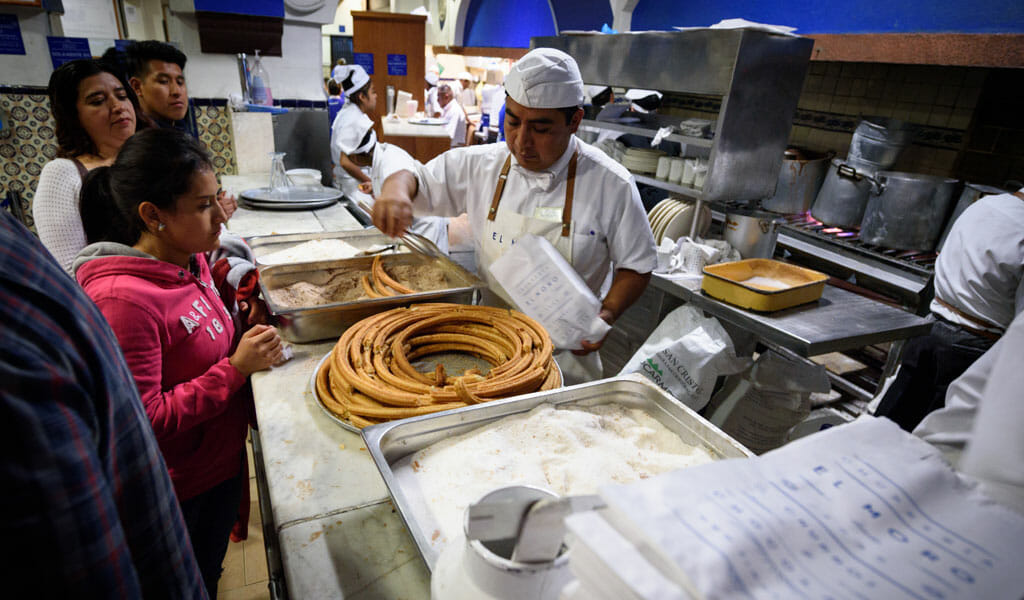 Mexico City | By J. Alejandro
By J. Alejandro
Mexico CityNowhere in Mexico City does one feel the collective weight of the largest population in North America more than on Avenida Lazaro Cardenas, the traffic artery that gushes a surfeit of humans and cars up the heart of the city’s downtown. The gutters stink of rotting fruit. Dirt and littered garbage encrust the sidewalks. And,…