When Liz Hillbruner moved to Mexico City in 2010 from the United States, she found herself obsessed with tlacoyos, the little football-shaped street eats she saw cooking on griddles around her neighborhood. They were a perfect package of corn dough, wrapped around beans or cheese and topped with the ubiquitous nopal, onion and cilantro salad popular at taco stands in Mexico.

As she ate her way through the neighborhood, she simultaneously enrolled in a master course on Mexican cuisine. When it came time to formulate a final project, it seemed only natural to study what was already on her mind. 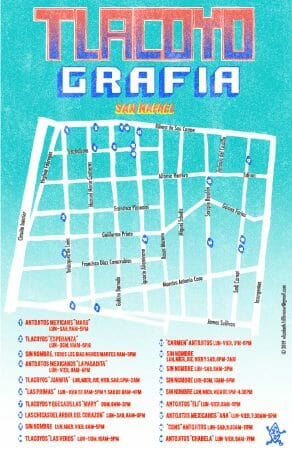 She decided on a map – the Tlacoyografía – a tool for the community and street food-loving transplants to find all the tlacoyo stands in the tlacoyo paradise that is the San Rafael neighborhood. Through it, she interviewed vendors about their histories, origins and where they believed the tlacoyo came from. The idea of the map was always to print it and display it around the neighborhood and so the only place you will find it online is here on our site.

Tlacoyo makers start with a ball of corn dough, placing a spoonful of filling into its center and patting the dough around it to cover the contents, shaping it into a flat paddle with tapered ends. It’s then placed on a circular, flat griddle called a comal to cook. Liz dug deep into the roots of this street snack – alternatively called clatoyo, clatloyo, tlatoyo, clayoyo, tlayoyo, tayoyo, tlatlaoyo and tlatloyo – but found that information was scant.

“There are entire books about tacos, tortas and tamales, but according to my research on the tlacoyo, it’s a snack that’s often mentioned, but not a lot of information is available about its history,” says Liz, who originally came to Mexico to volunteer at a maternal health center in the city of San Miguel de Allende, after having worked as a doula in the US. That said, this is one of a handful of foods documented to have been eaten before the Spanish arrived on Mexican shores.

People eyed Liz curiously as she asked about something that, for vendors, was one of the most normal things in the world, a food they had been making and selling their whole lives. Yet, no one turned her, or her questions, away.

“I ate a ridiculous amount of tlacoyos and I couldn’t eat tlacoyos for months afterwards,” she laughs. But it was finding the right moment to chat with stand owners about her project that proved difficult, and awkward at times, she says. “It was sort of complicated because people would be busy. I would go to a stand and think, ‘Oh, now’s not the time to interview them, they’re too busy’ but I would eat a tlacoyo anyways and go on to another stand.” 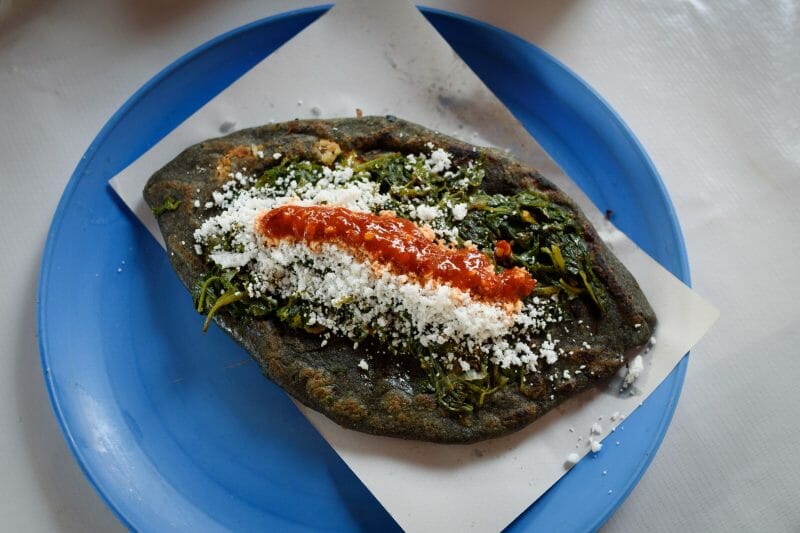 Liz’s neighborhood, San Rafael – or the San Rafa, as it is lovingly called – has an abundance of tlacoyo vendors, many of whom have been cooking up tlacoyos for several decades. Just outside of the Centro Historico, San Rafael was officially established in 1891 and was a countryside suburb for the moneyed class of Mexico City. Today, though part of Mexico City’s bustling urban core, it retains its residential milieu with lots of long-standing businesses, quiet nighttime streets and classic architecture.

With a map-wielding Liz as a guide, we recently visited San Rafa for a little tour de tlacoyo. Our first was a stand run by a vendor named Eli. With broad smiles and shoulders, Eli – together with her family – has tlacoyo stands all over the neighborhood. Each opens on different days and times, and the specialty when we visited her stand, Eli’s Antojitos, was quelites – a catch-all category for wild greens – that they place atop their tlacoyos.

Eli knows a few of her neighbors from Santiago that have stands nearby, but is much more tapped into the San Rafael gossip than that of her little town – most of her time is spent here making tlacoyos and quesadillas. She’s a bit like the neighborhood bartender.

“We put them on the grill, then add onion and salt until they are well seasoned,” says Eli of the greens. “Right now, they are just growing wild during the rainy season.” Eli travels into the city each day from nearby Santiago Tianguistenco, part of the daily migration of residents coming in to the centro to work – an hour and half in the morning, generally 2 hours returning in the afternoon.

Liz once visited their town at the behest of another vendor, Vicky, whom she’s become close to through this project. “I’ve never seen so much masa being carried around in buckets,” she says. “There are milpas everywhere, and I saw four butchers in one block and thought, ‘Wow people must eat a lot of meat here.’ But Vicky said no, it was because most people that live there go in to the city every day to sell food, and so they take their own supplies and sell tacos or tlacoyos, or whatever.” 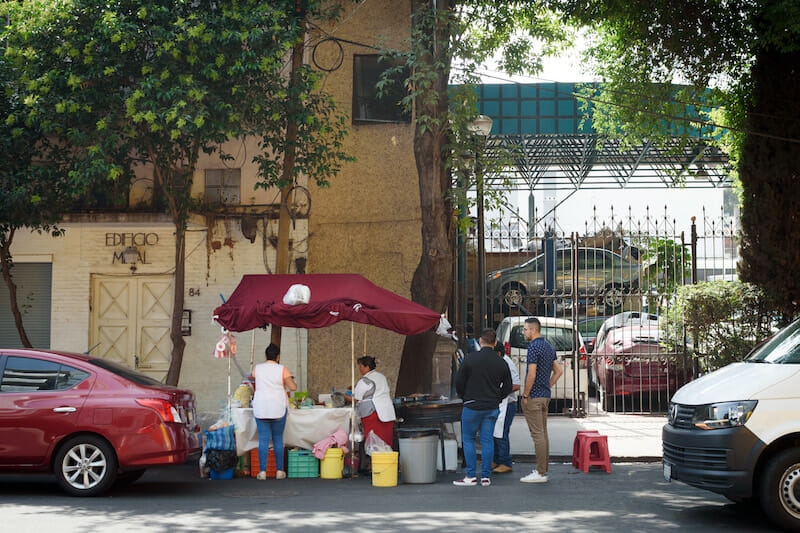 Eli knows a few of her neighbors from Santiago that have stands nearby, but is much more tapped into the San Rafael gossip than that of her little town – most of her time is spent here making tlacoyos and quesadillas. She’s a bit like the neighborhood bartender.

Oliva – another vendor on Liz’s map that we visited – is wearing a flowered apron, with a tight bun and a metal headband. The woman helping her, Cristina, wears a weathered cowboy hat. As we try their potato-filled tlacoyos, she tells us the stand has been running for over 34 years, started by her mother-in-law.

She turns to a seated woman, obviously a regular, saying, “Just ask her.” She starts the conversation for us: “You’ve been coming since your kids were little, how old are they now?”

“I’ve been coming since before I was even married!” the woman replies. “My oldest daughter is 32-years-old and when she was born the señora already had this stand. We would pass by when I was dropping her off at kindergarten.” 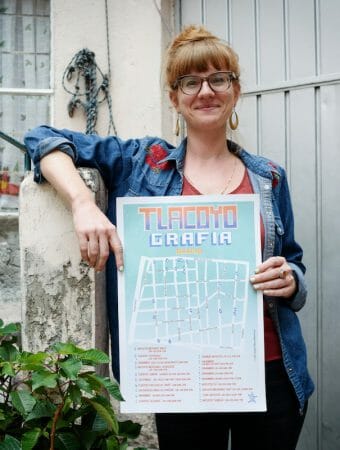 Despite Liz’s tall, lithe figure and her long red hair, everyone seems to know that she is no stranger here. Her chilanga accent makes its way out as we talk to women at each stand about the weather and the difficulty of patting out a tlacoyo so the filling doesn’t leak. As each vendor is handed the latest version of Liz’s map, it’s obvious that they’re not totally sure about its purpose, but they are delighted to be included.

At this point, its creator has eaten tlacoyos not only all over the city, but all over the country – and yet, home is home, and the tlacoyos she loves best are in the San Rafael. On the way back to her apartment, we stop so she can pick up a few to-go from Doña Lulu’s place on Avenida San Cosme. Lulu and her mother-in-law, who sits scraping nopal cactus with a long gray braid down her back, are, of course, already on the map. 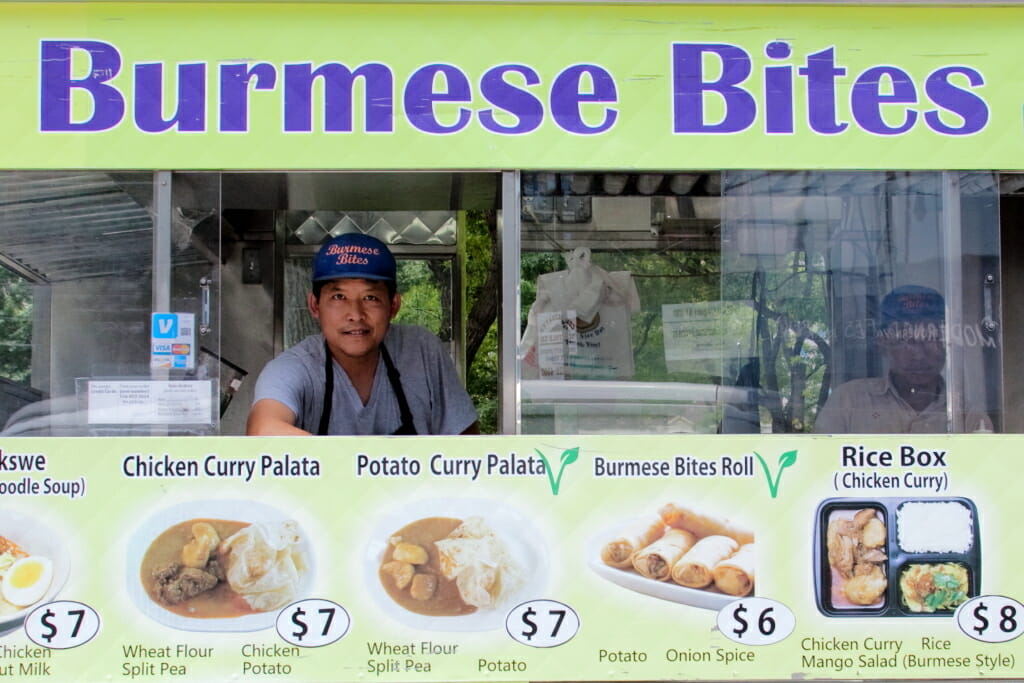