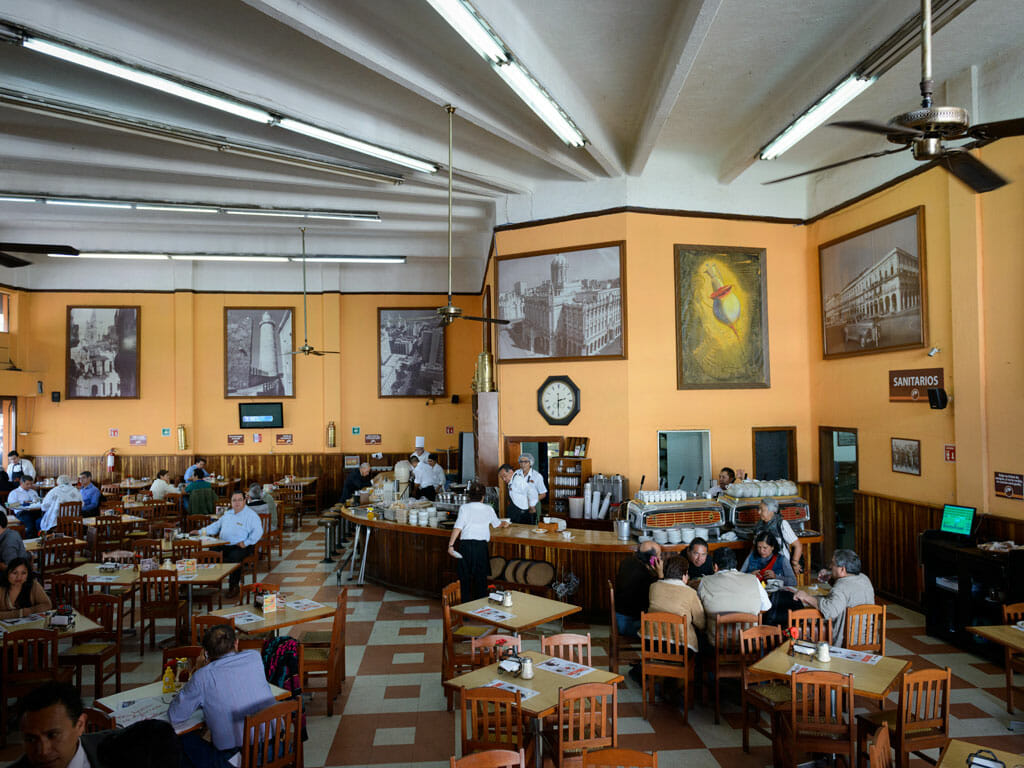 Located in the Juárez neighborhood, right at the outskirts of downtown and a few blocks from glamorous Avenida Reforma, Café La Habana hasn’t changed much since it opened in 1954, and the proof is in the old pictures of the place hanging on the walls.

For more than six decades now Café La Habana has served great coffee from the state of Veracruz and also sells the beans by the kilo. As in many Mexican restaurants, it offers café lechero, which is one or two shots (depending on the customer’s preference) of very strong espresso in a large glass that is then filled up with hot milk. One of our favorite drinks here, however, was the café bombón (roughly translated as “marshmallow coffee”), a cortado double espresso shot with ground coffee sprinkled on top. Despite its sweet name, it’s a very strong drink for those who are in need of a caffeine fix. 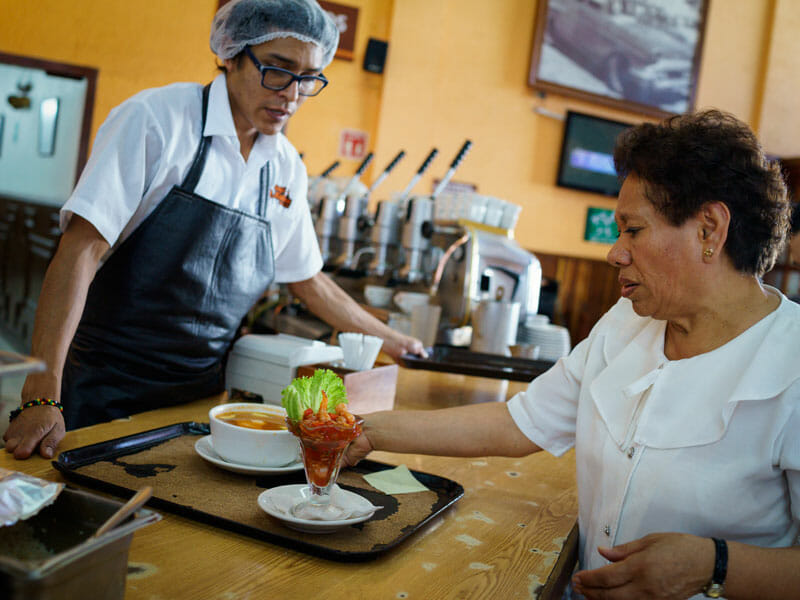 Nowadays Café La Habana customers are mostly local office workers. Every now and then a politician who wants to be seen comes to the restaurant to have lunch. This has become a fad because of the venue’s reputation for being frequented by famous and glamorous customers – among them, Gabriel García Márquez and Octavio Paz. Legend has it that steamy cups of coffee from this joint fueled Fidel Castro and Ernesto “Che” Guevara while they were planning the last stages of the Cuban revolution in the mid 50s.

Café La Habana is more than a coffee shop. It has become one of our favorite places to have breakfast in the city. We like to start with a cup of lechero and a piece of sweet bread baked in-house – our favorite is a concha filled with nata, heavy cream. Then we usually move on to a plate of green chilaquiles topped with a fried egg. Other classic dishes one can find for breakfast are huevos motuleños (fried eggs served over fried tortillas, black refried beans and slices of plantain), green and red enchiladas and huevos al gusto (eggs cooked with a choice of different ingredients, such as ham, chorizo and beans). 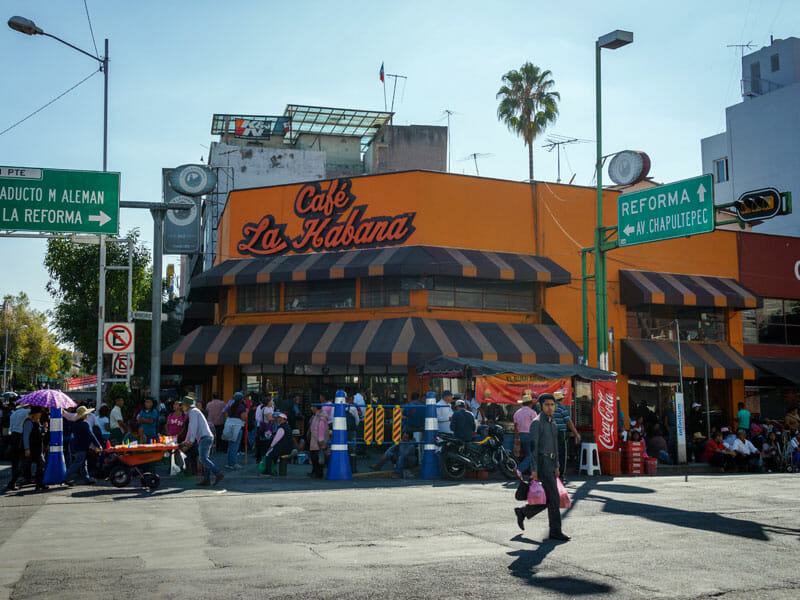 For lunch Café La Habana offers a menú ejecutivo, a sort of comida corrida that is very accessible for workers in the area. And for dinner, the menu offers numerous classic Mexican dishes, such as enchiladas, pozole and tostadas among many others. Food aside, sometimes we just want to sit for a while with a cup of coffee and a piece of bread or dessert and enjoy the timelessness of this place while the city keeps bustling outside, and we can’t help but wonder how many characters from Bolaños’s or Garcìa’s books were born within these walls. 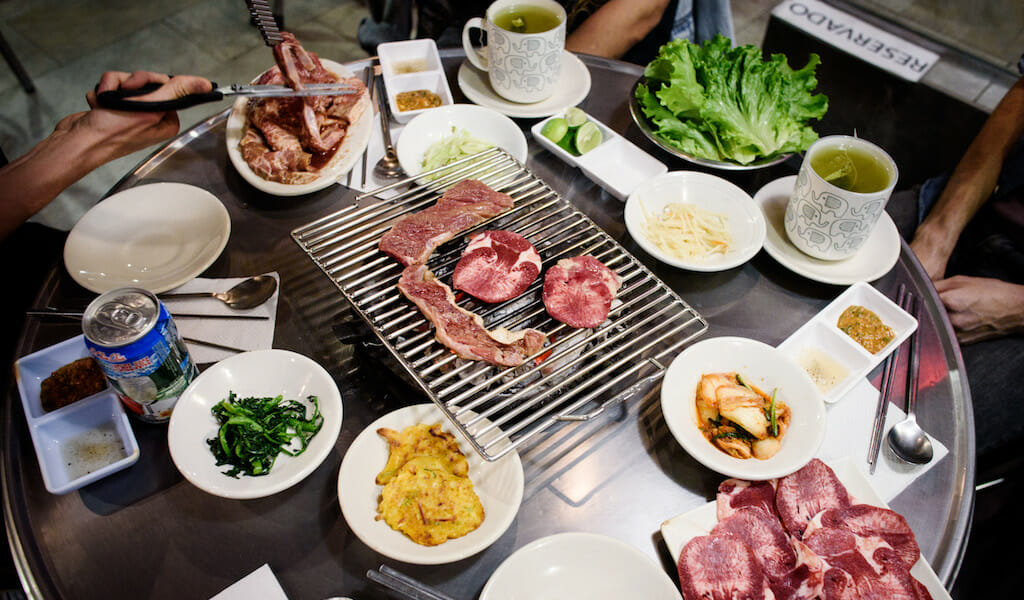 Mexico City | By Lydia Carey
By Lydia Carey
Mexico CityColonia Juárez – our 2019 “neighborhood to visit” in Mexico City – was a forgotten district for many years, known more for its karaoke bars and strip clubs than its charming plazas or cafés. Originally founded as an illustrious upscale neighborhood for the city’s industrialists, the area saw an influx of Asian immigrants mid-century, abandonment… 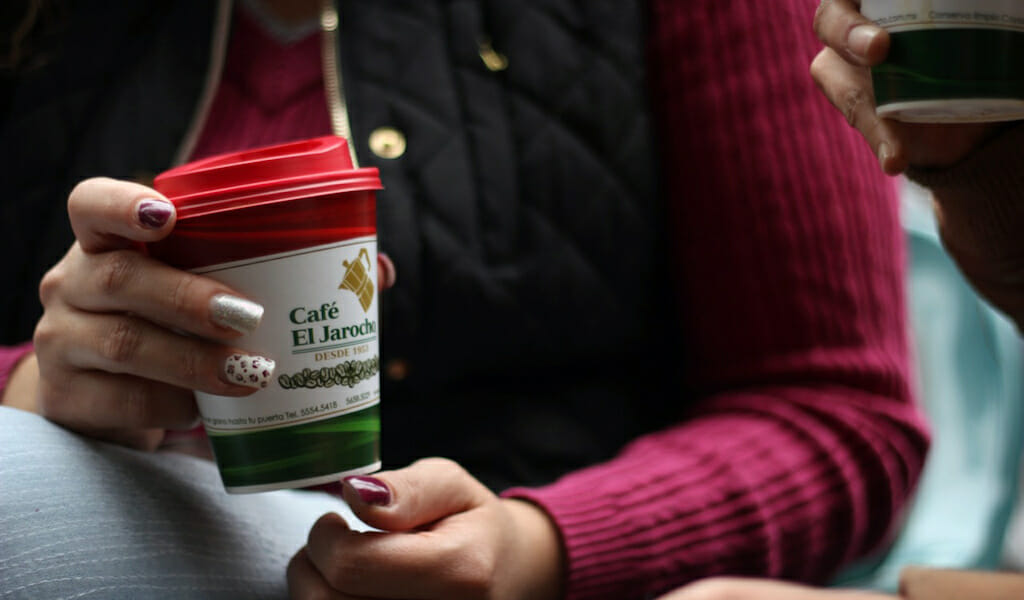 Mexico City | By Lauren Cocking
By Lauren Cocking
Mexico CityWay south of the pure, unadulterated hustle and bustle of the historic center, east of refined and residential San Ángel, and northwest of Xochimilco and its colorful canals lies Coyoacán, a neighborhood unlike any other in the megalopolis that is Mexico City. Once an artsy hangout for the movers and shakers of the day, like…