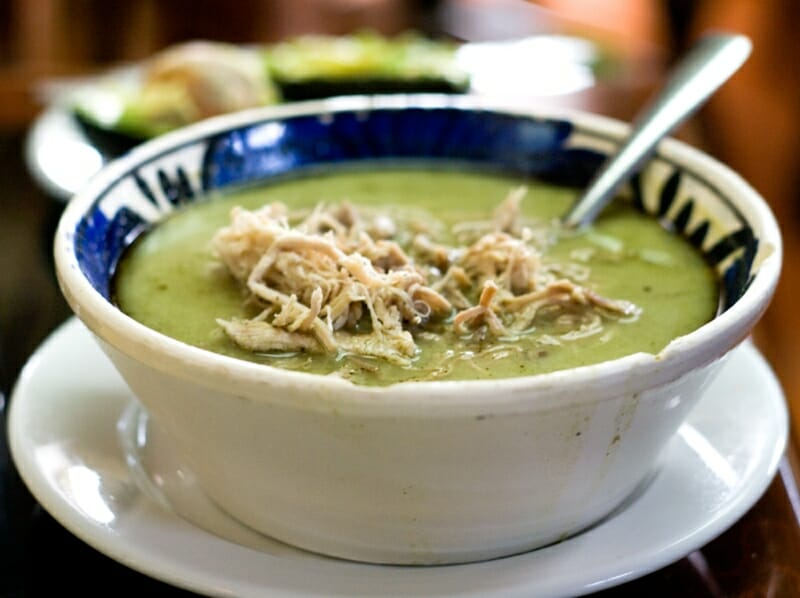 Editor’s note: We’re celebrating Soup Week at Culinary Backstreets, and today’s installment takes us to Mexico City, to an eatery whose specialty is hearty Guerrero-style pozole.

Pozole, like the tortilla, is one of those ancient dishes that seem to be embedded in Mexicans’ DNA, serving as a culinary link to the ancestral past. A type of soup or stew that was a ceremonial dish in pre-Hispanic Mexico, pozole has yet to be widely commercialized, being offered mainly in pozolerías, small restaurants that specialize in serving up the dish and little else.

Mexico City is home to plenty of these venues, of which El Pozole de Moctezuma, a soup house that’s been in business since 1947, is our favorite. Pozolerías tend to offer different kinds of pozole depending on the region of the country from which the owners hail, and Moctezuma is no exception, specializing in pozole from the state of Guerrero, which is typically made with a green broth based on tomatillos, a small, green, tomato-like fruit with an oniony skin and a puckeringly tart flavor.

Though pozoles vary, the central ingredient in the dish – whose name comes from the Nahuatl word potzolli, meaning “foamy” – is cacahuazintle corn (a Mexican variety of corn with large, tough, white kernels) that has been turned into something akin to hominy in the U.S. through a process known as nixtamalization. This involves pre-cooking the kernels in an alkaline solution that softens them and removes their tough outer layer, making the corn mixture foamy (hence the Nahuatl word) and allowing the kernels to open up like flowers greeting the morning sun. To the basic corn mixture, various different ingredients were traditionally added, depending on the ceremony or geographic location. It is thought that during pre-Hispanic times, Aztec priests and ruling classes were even served pozole made with the boiled parts of sacrificed human prisoners. (Needless to say, this tradition was abandoned long ago.)

Today, pozole has been adapted according to local culinary traditions around Mexico. In some states, like Chiapas, queso fresco (a mild, crumbly white cheese) may be added, while in others, such as Michoacán and Guerrero, the dish features chicharrón (fried pork skin). Although in coastal areas such as Veracruz or Sinaloa it’s typical for seafood to be the main ingredient, elsewhere the meat used most commonly is pork. In Mexico City, pozole is typically made with either clear or red broth, depending on the vegetables used. In fact, one may find multiple different versions of pozole in any given area, as the composition of the soup mainly depends on the preferences of the specific restaurant or eatery and the chefs’ region of origin.

Located not far from the subway station of Garibaldi in a neighborhood famous for its mariachi bands, El Pozole de Moctezuma doesn’t look like much from the outside. The building, which dates back to the 1940s and seems mostly unchanged since that time, looks primarily residential, with no outward signs that a restaurant exists within. The only indication that this is the right place is a call button on a panel at the main entrance with the single word “pozole” listed on it. After being buzzed in, diners proceed down a shadowy hallway, with only the enticing smell of pozole to guide them forward. The restaurant itself is brightly lit and inviting, decorated simply with Spanish tile, white plaster walls, plain furniture and Mexican folk art pieces.

The menu is not large, consisting mainly of a few appetizer choices and pozole, which comes in three different sizes and is available in chicken or pork, each with either a green or clear broth. Our favorite is the maciza, made with lean pork meat in green broth. When the pozole is brought to the table, the server will explain how to eat the pozole in the proper way. A variety of ingredients are delivered that diners must add to the pozole in the following order: onion slices, ground chili powder, ground oregano, a squeeze of lime, sliced avocado and, finally, crunchy pieces of chicharrón. Once these ingredients go in, the server makes one final, unexpected, addition: a spoonful of smoky mezcal. A traditional Mexican alcohol that comes from the same agave family as tequila, mezcal adds the perfect extra kick to the pozole without being too overpowering. Altogether, the ingredients form a hearty, mildly spicy concoction bursting with complex flavors, with most of the spiciness derived from the broth itself and the added chili.

Pozole may have been around for thousands of years, but this homey, filling soup continues to surprise us each time we eat it. With any luck, the hidden gem that is El Pozole de Moctezuma will be around for another 65 years, continuing to treat hungry patrons to a little piece of Mexican culinary heritage.

This review was originally published on January 17, 2013. 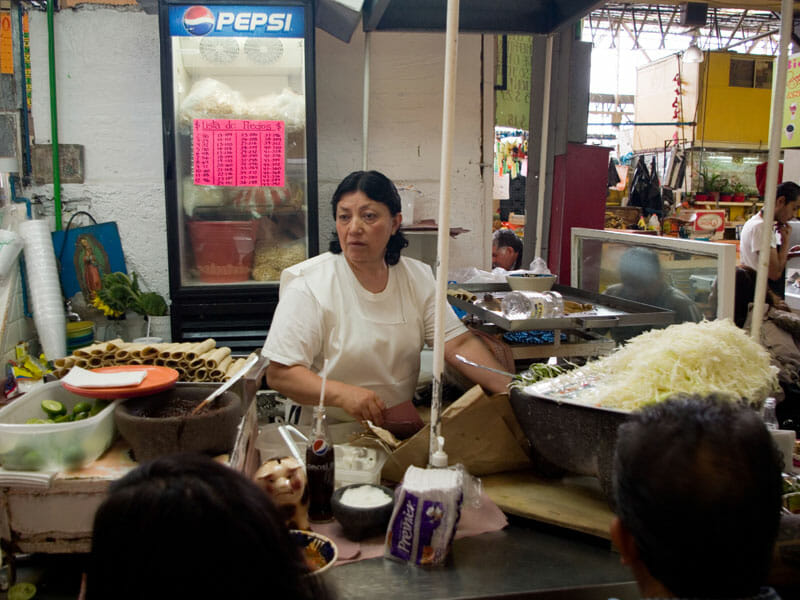 Mexico City | By Ben Herrera
By Ben Herrera
Mexico CityEditor’s note: This feature by CB’s Mexico City correspondent Ben Herrera takes a look at Mexican fondas, inspired by his own experience growing up in one of these family-run neighborhood restaurants. For as long as I can remember, I have loved mornings, a preference that likely – perhaps counterintuitively – originates from my experience working…