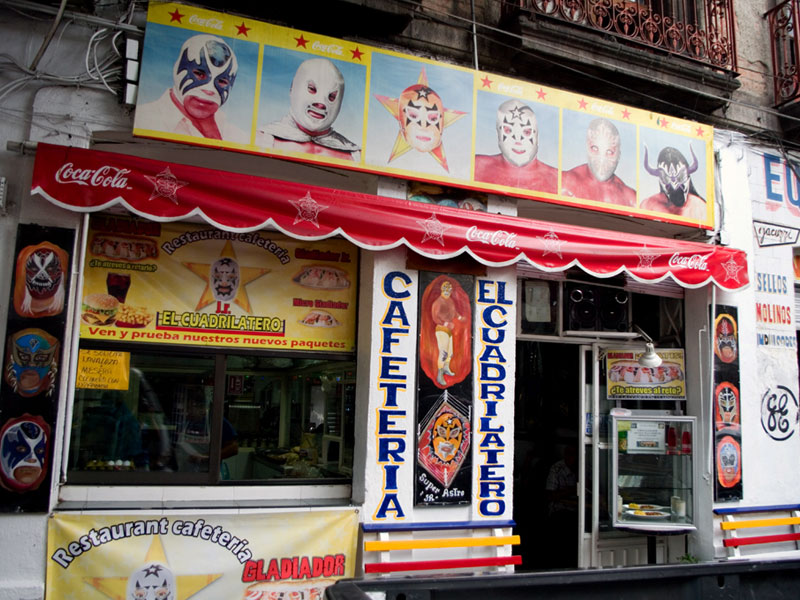 Mexico City’s Centro Histórico is never a dull place. Combined with the massive crowds and the constant roar of honking horns, passing buses and shouting vendors, the sheer visual stimulus is enough to make one weak in the knees after an hour or so. It can be a huge relief to step off the street for a breather and a bite to eat – although, in the case of Cafetería El Cuadrilátero, whose name can be translated to “wrestling ring cafeteria,” a “bite” is quite an understatement.

Even before you step inside El Cuadrilátero, the eatery’s theme – Mexican wrestling, or lucha libre – is immediately in your face. This theme was a natural choice for María Guadalupe Cortés and her then-husband, a luchador (wrestler) known as “Súper Astro,” who opened the place together in 1991. Outside, the entrance is painted on three sides with the masked faces of luchadores, while inside, an ever-growing collection of memorabilia covers almost every vertical surface. One wall is lined with glass boxes containing real-deal Mexican wrestling masks in a wide array of colors and designs and another is plastered with dozens of plaques, art and photographs of María and 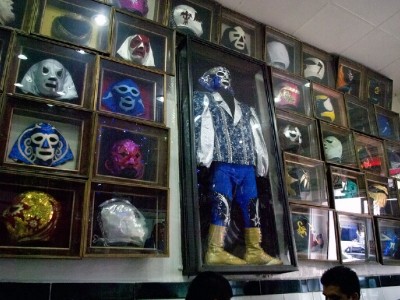 her family posing with assorted masked men. Seating is at one of a handful of tables or at the counters, and a small, enclosed grill section adjacent to the dining area opens onto the street to serve sidewalk customers.

With so many distractions, it can be a bit difficult to focus on the menu, but that’s not much of an issue since there’s really just one star dish, El Cuadrilátero’s famous torta and its assorted variations. As María explains, with so many luchador friends, they had to have a menu that satisfied large appetites. They decided to focus on the simple torta, a type of sandwich filled with meat, cheese and vegetables. But these would be no ordinary tortas – instead, they would be super-sized. After some experimenting with different ingredients, breads and dimensions, the pair arrived at the current menu, which includes dozens of varieties of tortas, most of which are belt-busting.

On our visit, we ordered a chicken torta and the smaller version of the “Gladiador.” The plate-sized chicken torta’s crispy, toasted sesame-seed roll was stuffed with hand- shredded chicken and topped with tomato slices, avocado, onion and mayonnaise; it looked delicious and tasted even better. Meanwhile, the Gladiador was in a class of its own. This was one of the first items on the menu, and it has continued as one of the restaurant’s most popular meals. Consisting of six types of meat (ham, bacon, hot dogs, chicken, steak and chorizo), along with cheese, egg, onion, tomato, chili peppers and avocado on a secret, specially made sesame roll, this goliath sandwich is 40 cm 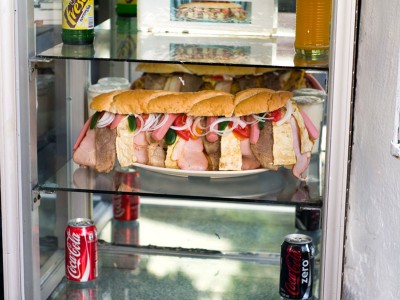 long and weighs in at 1.3 kilograms. Luckily for non- luchador customers, there is the Jr. size, which is far more manageable. Our Gladiador Jr. more than delivered, packing a very filling, meaty explosion in its smaller punch.

We washed both tortas down with a refreshing pitcher of freshly made guava water. El Cuadrilátero also offers a large selection of more traditional dishes, such as chicken soup, quesadillas and milanesa (a thin, breaded steak), but the crowded restaurant’s customers didn’t seem to know or care about them. Just like us, they were trying to polish off heavyweight tortas, with varying degrees of success.

El Cuadrilátero is clearly devoted to the twin causes of sandwich-making and lucha libre. As part of the venue’s 21st anniversary celebration in July, a nearby street will be closed to traffic for a free Mexican wrestling show that will feature up to 60 luchadores. With an overstuffed Gladiador likely powering the luchadores, we expect the wrestling on that day to be every bit as good as the tortas at El Cuadrilátero. 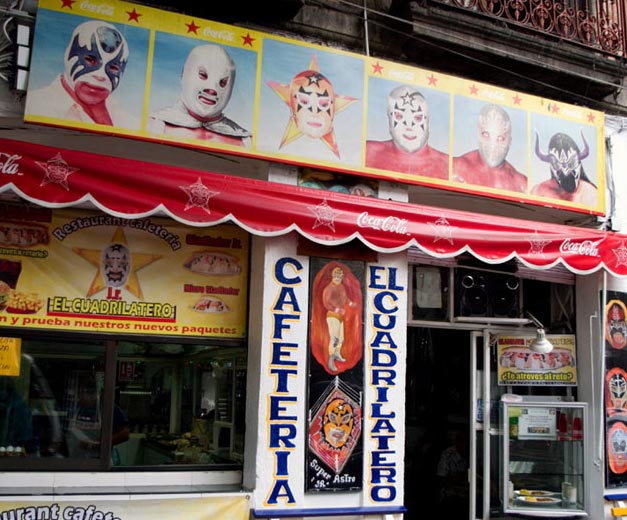 Mexico City | By Ben Herrera
By Ben Herrera
Mexico City -- Mexico City’s Centro Histórico is never a dull place. Combined with the massive crowds and the constant roar of honking horns, passing buses and shouting vendors, the sheer visual stimulus is enough to make one weak in the knees after an hour or so. It can be a huge relief to step off… 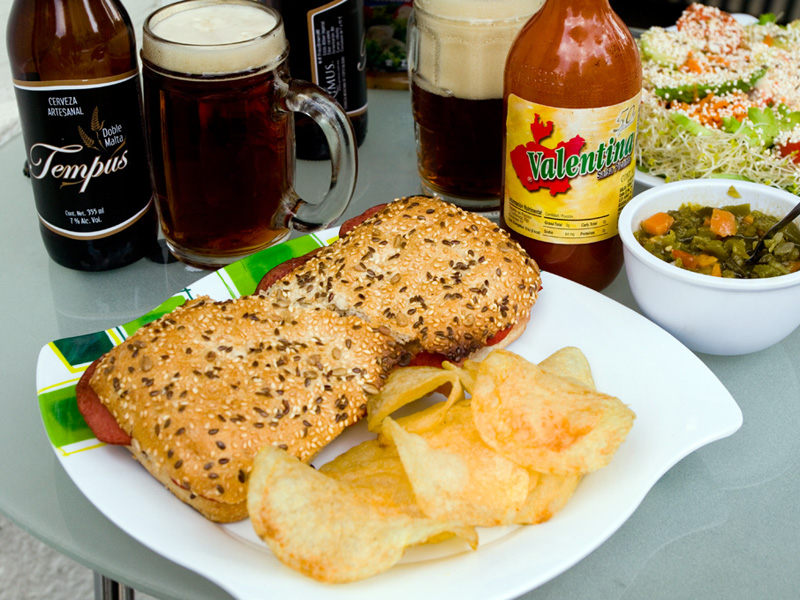 Mexico City | By Ben Herrera
By Ben Herrera
Mexico City -- In Mexico, sandwiches generally come in the form of the torta, usually made out of a white bread roll known as a bolillo that has been sliced in half and then filled to the brim with meat, avocado, tomato, onion and sliced jalapeño peppers. In Mexico City’s San Rafael neighborhood, however, a family-owned sandwich… 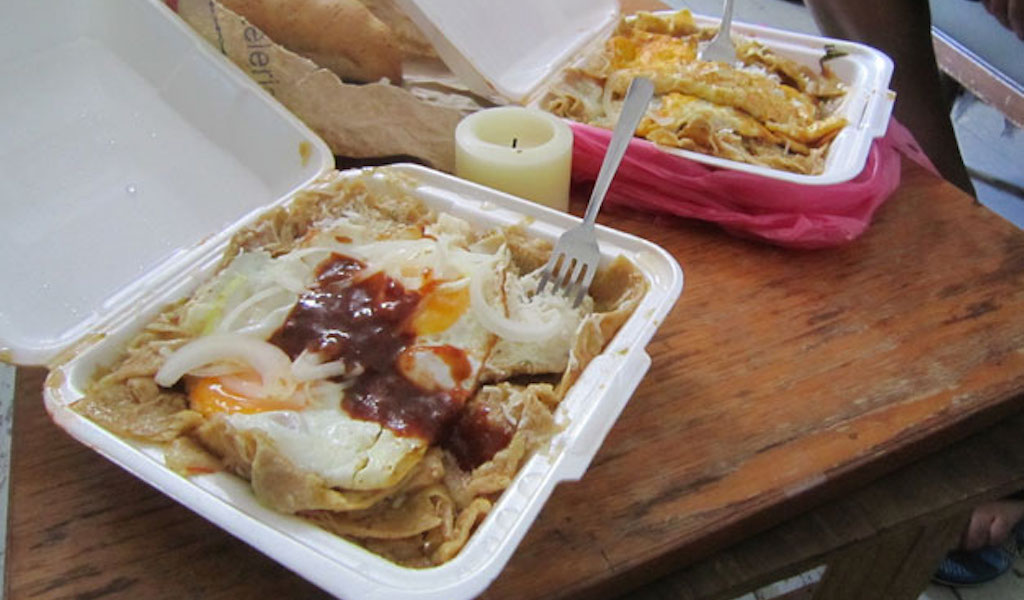 Mexico City | By James Young
By James Young
Mexico City -- Mexican diners offer a place for many in the capital to go for simple eats, often for people struggling to make ends meet. The key is to look for a crowded lunch bar lined with clients downing food before they have to head back to work. For example, if you find yourself strolling…