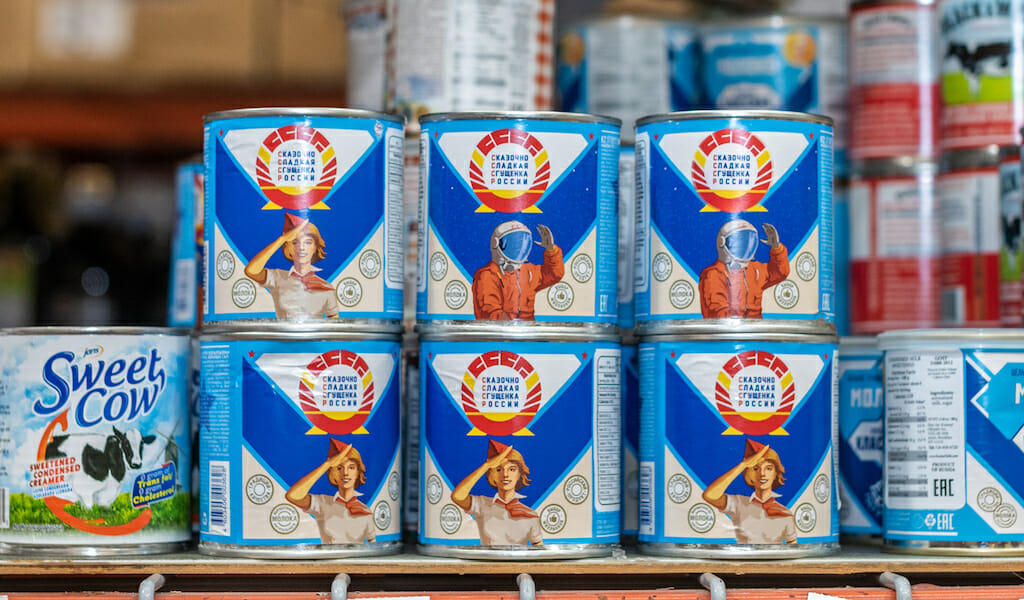 This beige-walled, gray-roofed supermarket, squeezed between razor wire-rimmed industrial warehouses and North Hollywood train tracks, isn’t much to look at. The name, Pacific Coast Food, fails to hint at what one may find inside: a nirvana of edible nostalgia for those who grew up in the Soviet Union and Communist Eastern Bloc.

Colloquially, it’s known as the “Russian Costco,” after the American wholesale giant, and a more fitting name for the aisles upon aisles of snacks and mainstays coming from Eastern Europe, Central Asia and the Caucasus region. 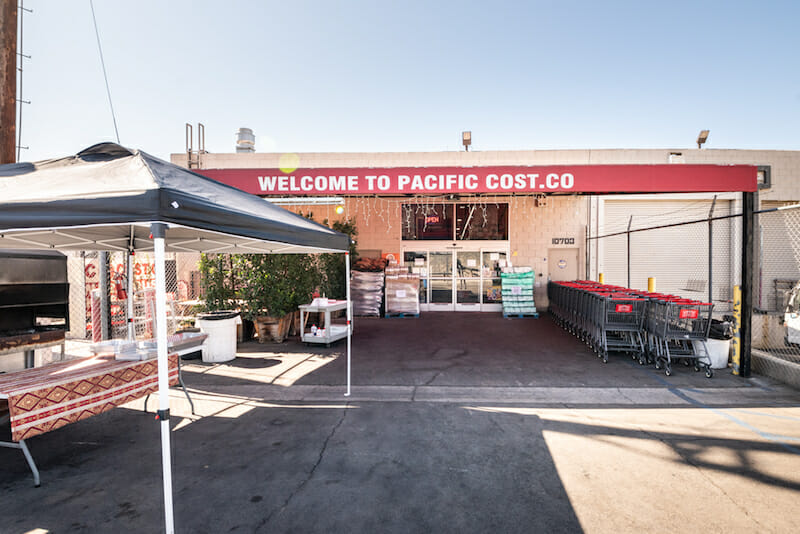 The business was initially opened as a wholesaler in 2010 with San Fernando Valley’s Slavic, Baltic and Western-and-Central Asian communities in mind; notably Studio City’s huge Russian enclave and the Armenian strongholds of North Hollywood and Glendale.

Initially, the store even tried to use the name “Pacific Cost.Co” until the attorneys of a certain ubiquitous megastore protested. But you can’t sue over a nickname, so “Russian Costco” it will remain in most minds. My wife, Tatiana, was born into a Russian military family in Baku, Azerbaijan, in the late seventies. A Soviet military brat, her early years were spent in Georgia, Turkmenistan and numerous urban and rural points in Russia, before her family settled in Ukraine shortly before the U.S.S.R.’s official demise in 1991. 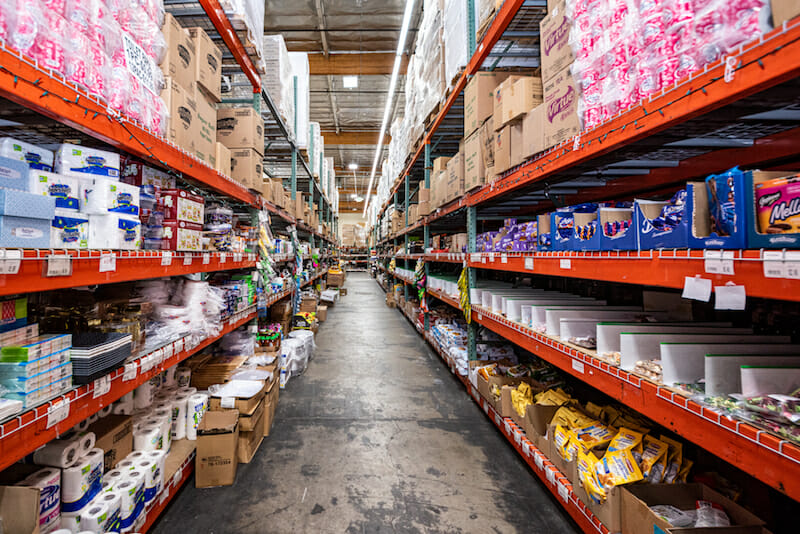 Many of the foods of her upbringing have become essentials in our kitchen over the 12 years since we met. There are quite a few ingredients and dishes I can no longer imagine living without. Their stories reflect the cultures, cooking and customs of numerous nations, regions and bygone civilizations.

Colloquially, Pacific Coast Food is known as the ‘Russian Costco,’ after the American wholesale giant, and a more fitting name for the aisles upon aisles of snacks and mainstays coming from Eastern Europe, Central Asia and the Caucasus region.

So, to help you navigate this massive market, or maybe reconnect with some treasures from your own Eastern European or Central Asian upbringing, here we have a guide to the Nine Soviet Staples to Buy at North Hollywood’s “Russian Costco.” 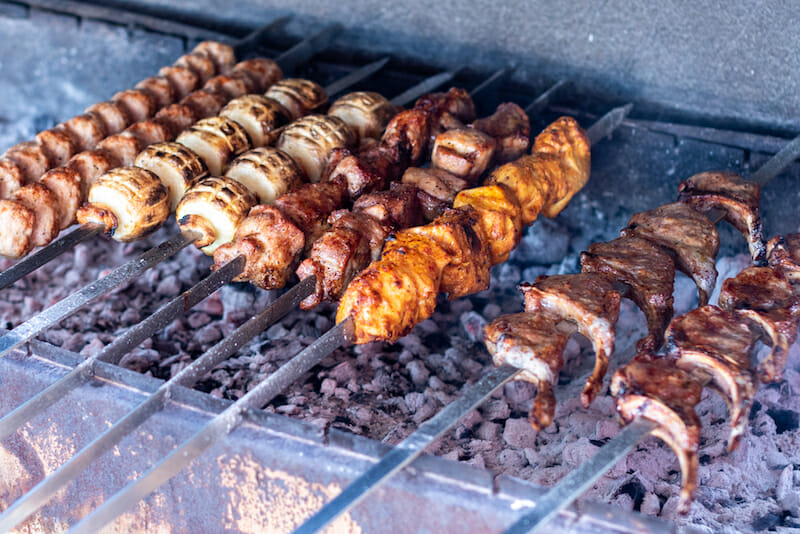 Think of this as Slavic barbecue. It’s charcoal-grilled skewers of meat adapted from the shish-kebab of Russia’s Central Asian and Middle Eastern neighbors, and grilled al fresco by families wherever a patch of green can be found come weekend, from forests to public parks. At Pacific Coast Food, you’ll find artful arrangements of lamb chops; thick cubes of marinated pork, beef and chicken lule; and potato wedges separated with sizzling salo (cured pork back fat).

It’s all cooked on the massive, brick-lined, Armenian-manned mangal (barbecue) in front. In fact, anything from the butcher at the store’s rear can be grilled to order for you here, including the tomahawk steaks, filet mignon, veal, marrow bones, giant sturgeons and reservable suckling pigs on display. (It’s imperative to call in advance so they can prepare the grill for your arrival.) 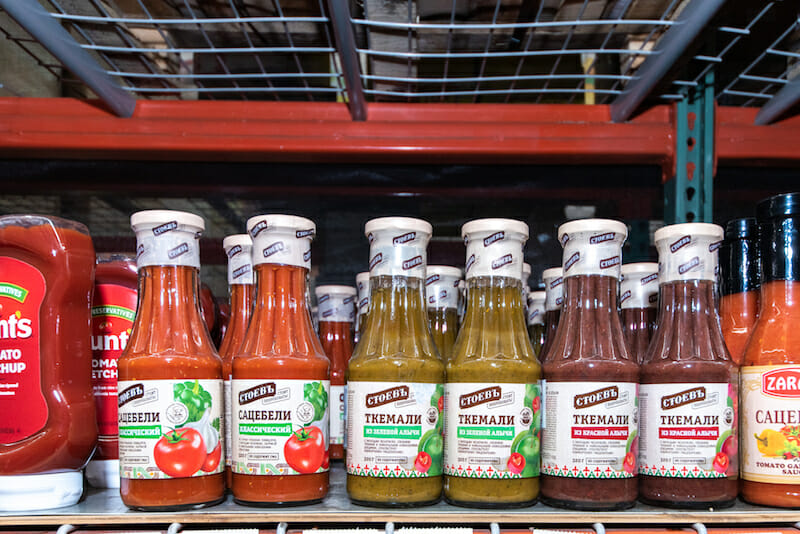 A peppery, sweet-and-tart sauce we can’t live without, tkemali tastes great on rich meats – and basically everything else. It’s traditional to the Georgian countryside, made from a sour plum indigenous to the Caucasus nation. Tkemali comes in two variations: a red sauce made with the ripe plum, and green with the unripe, more tart fruit. Both are fortified with handfuls of herbs, typically including dill and cilantro. Each is absolutely delicious in its own way, and likely to become permanent occupants of your fridge, if not the world’s next ubiquitous sauce in the style of sriracha. 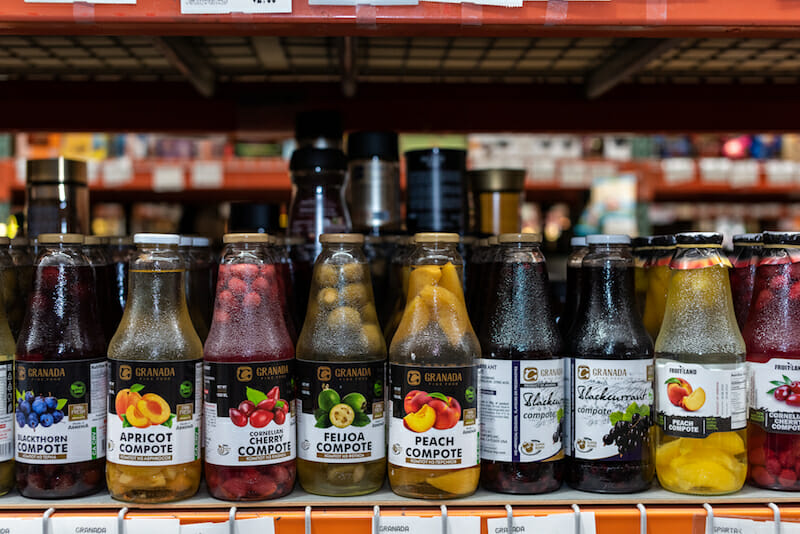 Soviet foods spanned the gamut from the luxurious – think caviar and colossal Kamchatka crab for Party bigwigs –to the practical (expressed through a long tradition of preserving, pickling and smoking foods). Kompot or compote, hot or cold stews made by boiling ripe fruit in water, was a must-have to survive harsh Russian winters. Most houses were stacked in colorful glass jars bearing the homemade infusions. Their popularity extends throughout Eastern and Southern Europe, the Balkan nations, the Caucasus region and Central Asia. Today, the pleasures of bottled kompot are two-fold. After draining the refreshing, light drinks, packed with the true taste of their featured produce, one is left with a small mountain of the fruits themselves. This allows Westerners to sample delicious berries they may have seldom seen before, including sea buckthorn, bilberry, currant, white raspberry, dogwood berry, feijoa and quince. 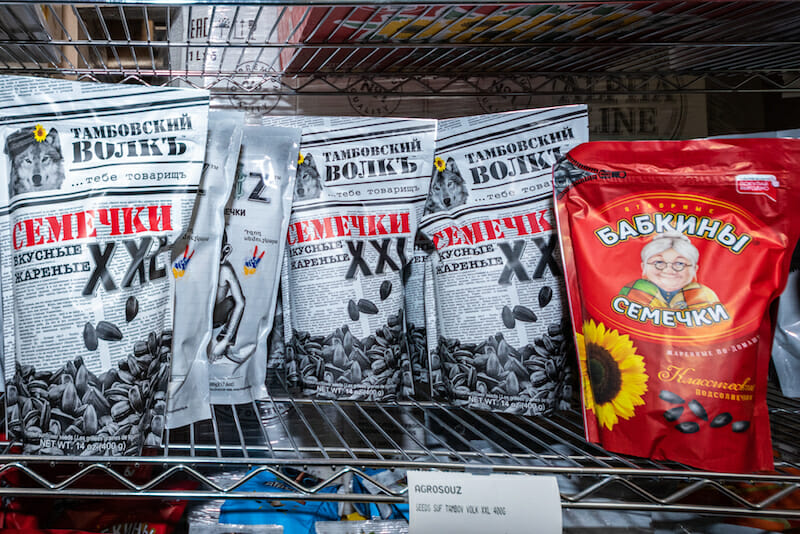 Where you find Russians and Ukrainians hanging out, you’ll find the compulsory eating of sunflower seeds, a classic pastime introduced by Peter the Great in the early 18th century. The custom of eating them publicly was frowned upon by the elite before the guns and power changed hands in 1917. These are not the salty, dusty variety you’d cram in your mouth during Little League, but big, black-shelled, sun-roasted seeds that pop in your mouth. The go-to brand at Pacific Coast Food is named “Tambov Wolf is your comrade,” a take on an in-joke from a 1956 film that you could pretty much liken to John Travolta telling Bruce Willis “I ain’t your friend palooka,” in Pulp Fiction. 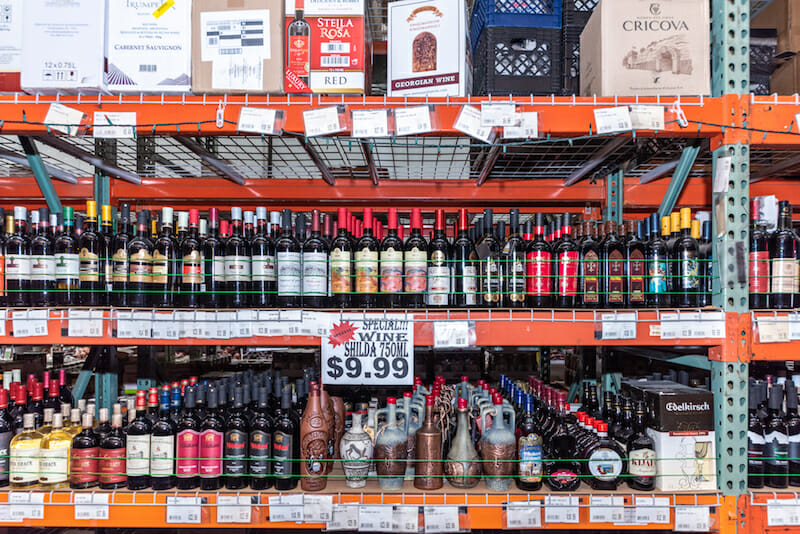 Pacific Coast Food knows how to party. In addition to tequila in machine-gun shaped bottles and fine Armenian brandy, the shelves overflow with beer from Russia, Ukraine and numerous Eastern Bloc countries such as Armenia, Poland, Czech Republic, Romania and the Balkans – including Lithuanian beer made from black bread. But it’s the vast displays of Georgian wine we like best, showcasing numerous natural, clay-fermented styles from a region that’s been making wine for the last 8,000 years. Packaged in a hodge-podge of modern glass bottles and ornate, customary ceramic vessels, Saperavi is the most common varietal here. Though, the broad selection extends well beyond, offering a vast supply of excellent dry and semi-sweet styles of wine. 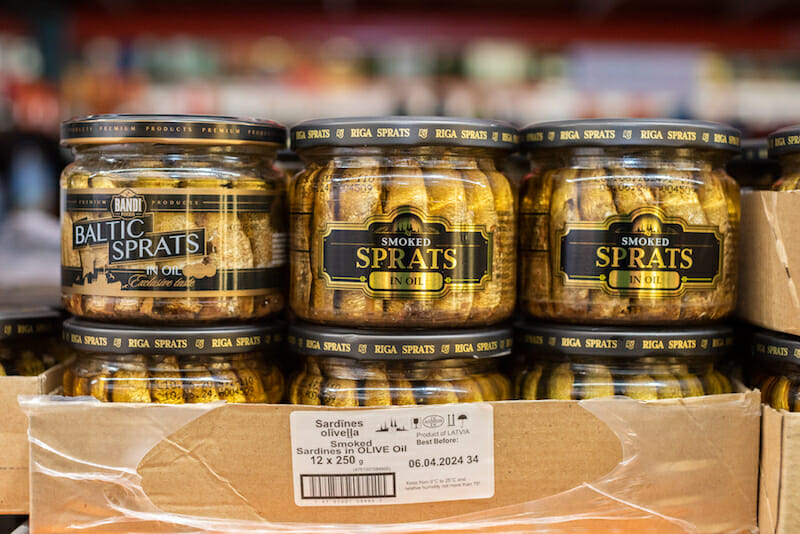 These are tiny, prized Latvian fish caught in the frigid waters of the Baltic and smoked and preserved in olive oil. It may not sound like much, but they’re smoky, fatty and delicious, whether eaten by hand with an ice-cold vodka or spread across a slice of buterbrod. A once hard-to-obtain treat for celebrations, Tatiana says she won’t ever forget waiting in eternal lines trying to get her hands on a few cans to save for the holidays. Today, she’s able to get them here for $3.99. 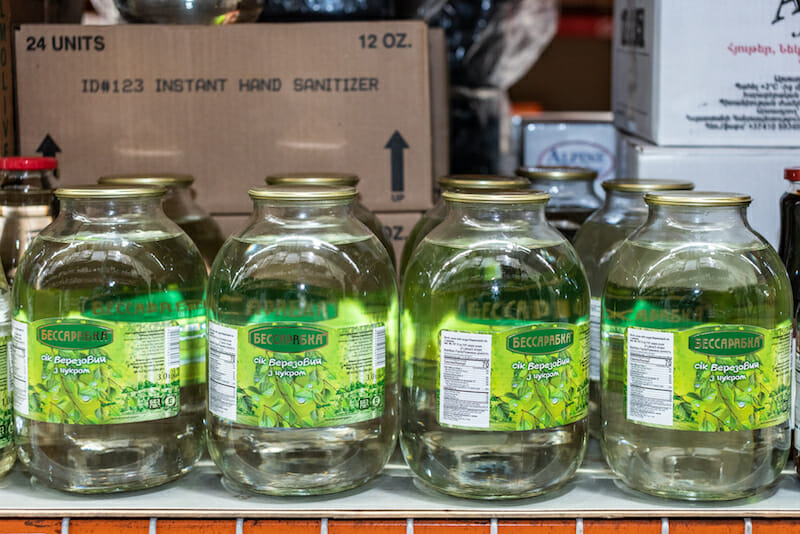 A sweet sap streams from the trunk of the white birch, Russia’s national tree. Beloved in lengthy novels and oil paintings alike, birch has traditionally served as a house, paper, shoe and boat-making material; fuel source; soap; cosmetic; and banya-thrashing tool for centuries. But the sap from the pale-barked tree has also sustained generations of Russians as a food source, been employed in ancient pagan rituals, used to survive cold Siberian winters and helped suppress greater countrywide starvation amid WWII. Today, it’s still common to see spring forests hung en masse with buckets collecting this juice over the season’s 20-day height. It even received an ode in the song “Birch Juice,” by the Belarusian band Pesnyary in the 1970s. 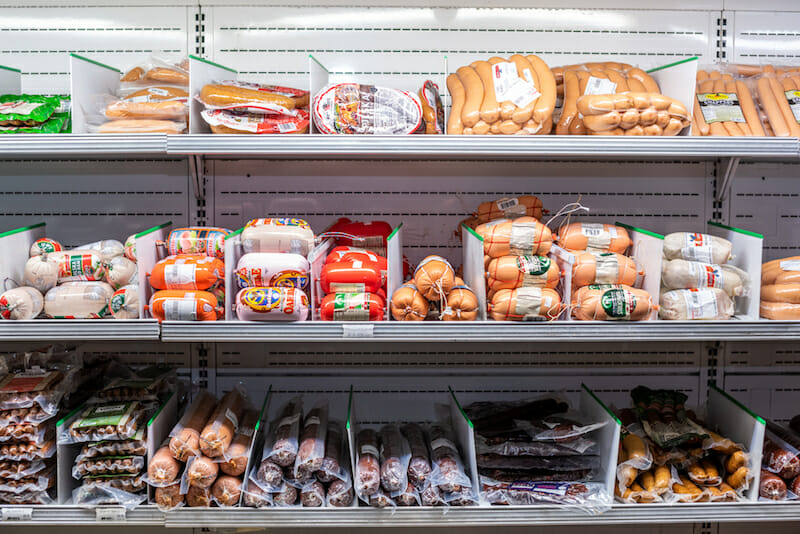 Like so many parts of the world, sausages and cured meats are central to the Slavic diet. There are over 100 different varieties in Pacific Coast Food’s deli section alone. Here are just a few to get started: Armenian versions of basturma and salo. Gargantuan Polish wedding sausages and kielbasa. Russian baby bologna. Balkan mini sujuk. Jewish Brand kosher salami. Shall we go on? Headcheese, garlic-and-black pepper bacon, smoked pork loin and mortadella… 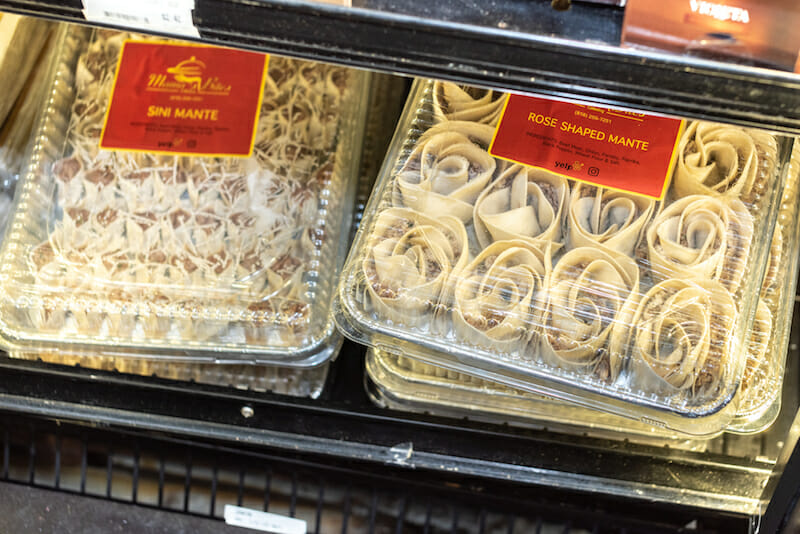 Pacific Coast Food is a dumpling powerhouse with scattered freezer cases full of frozen Polish pierogi, Ukrainian varenyky and Russian pelmeni ready for you to bring home. The frozen, open-faced sini mantı (or mante) and rose-shaped mantı, filled with spiced ground beef and common to Western Asia, remind Tatiana of her family’s meals in Turkmenistan. These, however, are made by a Lebanese-owned company based in the San Fernando Valley in a style enjoyed widely by the local Armenian community. 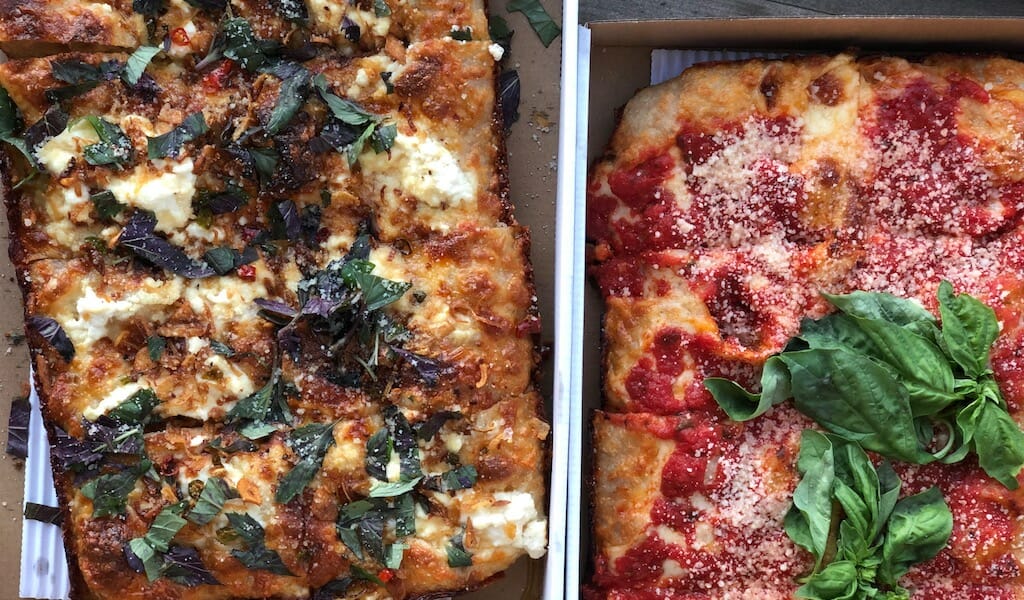 Los Angeles | By Ben Mesirow
By Ben Mesirow
Los Angeles2021 was the second-driest year in California’s recorded history. In L.A., there was no rain in November for the first time since 1992, and the mercury settled above 80 almost every afternoon that month. Our climate is usually arid, but this is extreme. We are in a drought (despite some recent record-breaking rain), with depleted…