A former village annexed to Barcelona in 1897, the city’s Sant Andreu district was a center of industrial development throughout the 20th century, becoming home to a large population of factory workers.

Today, it is a quiet residential area that feels caught between its Catalan village roots and industrial past, with buildings being renovated and repurposed, including factories transformed into creative arts complexes and parks, and a former canódromo (dog-racing track) that is now an “innovation center.”

It’s not a part of town that’s considered a dining destination, but Sant Andreu’s El Congrés neighborhood now has its own gastronomic unicorn: Toca Teca, which opened in 2012. A unique establishment of its kind in the area – for now, at least – the restaurant is a gourmet endeavor sustained by a couple of professional chefs, Maria Cots and Guillem Carulla. Partners in work and in life, the pair cook as if they were back at the top Barcelona restaurants in which they both worked, but their project has the comfort, freshness and price point of a neighborhood tapas bar far away from the city center. 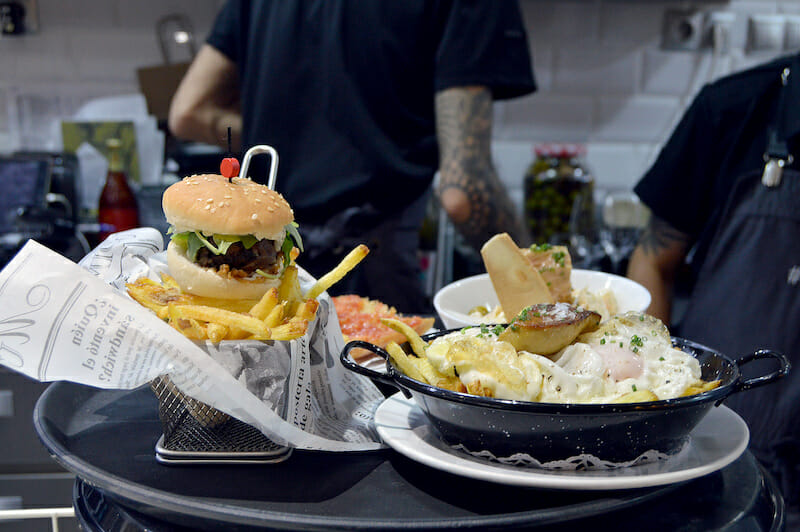 Maria and Guillem first met at cooking school and, as fate would have it, found each other again in a restaurant kitchen. It was at the Mandarin Oriental hotel where their professional and personal paths merged after Guillem’s stint at Hotel Condes de Barcelona with chef Martin Berasategui (of the Michelin-starred Lasarte) and Maria’s at Hotel Claris. After spending time under chef Jean Luck Figueras at the Mandarin’s restaurant El Blanc, they decided to go out on their own. “We were working so many hours together that we said, why not put all this time into our own restaurant? And then it happened that this space was available just on the street of our house!” Maria says.

Sant Andreu is some seven kilometers from Plaza Catalonia in Barcelona’s center, but it’s the kind of outer neighborhood – far from the high rents of downtown – that is increasingly becoming a welcoming place for the development of independent personal projects like Toca Teca. The restaurant itself is modern and casual and easily gets packed in the evenings, and sometimes has a line at the door. A patio in the street connects to a long room with a bar and open kitchen, leading to another dining space with natural light. They manage to draw customers from near and far. “We realized that, in our area, there were many bars and cafeterias, good classic restaurants, but nothing like our project,” Maria says.

Partners in work and in life, the pair cook as if they were back at the top Barcelona restaurants in which they both worked, but their project has the comfort, freshness and price point of a neighborhood tapas bar far away from the city center.

At Toca Teca, Maria and Guillem prepare tapas and other dishes to share that have a Mediterranean base and ingredients that mix classic traditions from Catalonia and Spain with international touches. They say they’ve taken what they have learned from some of the stellar kitchens they have worked in (plus, simply what they like to eat when they go out). We can really discern how they are following certain sacred rules from the top: choosing and investing in high-quality ingredients, being careful perfectionists when it comes to their technique and of course, creating interesting dishes.

The food quality is clear – from the fish they serve down to the flour used in the kitchen, a special variety for batters that comes from Jerez de la Frontera in Andalucía. As a result, the fried sonsos (Mediterranean sand eel) and squid are delightfully crispy – but not oily at all – as are the must-order cod fritters that are served with a generous and delicious side of honey for dipping. 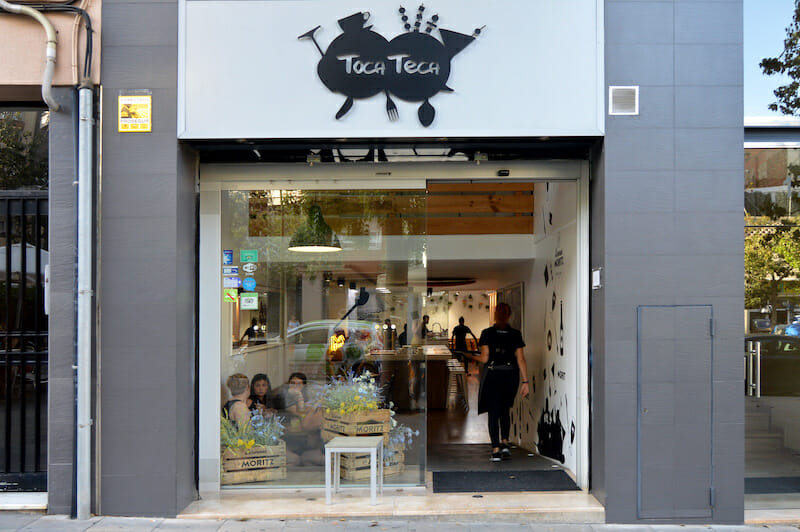 Obligatory eats include the rabo de toro (ox tail). They cook about 18 kilos of this dish per week. The meat is traditionally cooked for more than six hours with red wine and bressa (diced vegetables). The meat is deboned, formed into a roll and glazed in the oven, then served covered in sauce with a sprinkle of onion. It’s a refined, small dish that packs a high concentration of succulence and flavor, tender but somehow with a crispy touch.

But perhaps our favorite at Toca Teca is the scallops a la carbonara. A wonderful dish drizzled with an Italian influence, it was originally created in a smaller size for a neighborhood tapas contest, De Tapes per Sant Andreu 2017. The larger portion now comes as three perfectly grilled scallops smothered in a light carbonara sauce and sparkling with crispy pancetta pieces. It’s a fantastic and complementary union of flavor and textures. Their menu, of course, also includes the classics like patatas bravas and another simple but fantastic creation, the patatas reverdes, similar to bravas but with a refreshing sauce of aioli and basil.

As we’ve come to discover, at Toca Teca nothing disappoints – and unicorns do exist, at least in Sant Andreu!

Editor’s note: To celebrate the our 2020 neighborhood guide, we will be republishing dispatches from the less-visited areas – like Sant Andreu – that our correspondents are planning to explore this year. This article was originally published on July 29, 2019.

Barcelona | By Johanna Bailey
By Johanna Bailey
BarcelonaDear Culinary Backstreets, We will be visiting Barcelona with our children. Do you have any good recommendations of places in the city to eat with kids? First of all, you should know that in Spain, you are welcome with children in just about any dining establishment. Because Spaniards don’t tend to entertain much in their…
Toca Teca
Carrer Garcilaso, 172, El Congrés, Sant Andreu
Tel. + 34 93 408 62 88
Hours: Tues.-Fri. 1pm-11pm; Sat. 12:30pm-4pm & 8pm-11pm