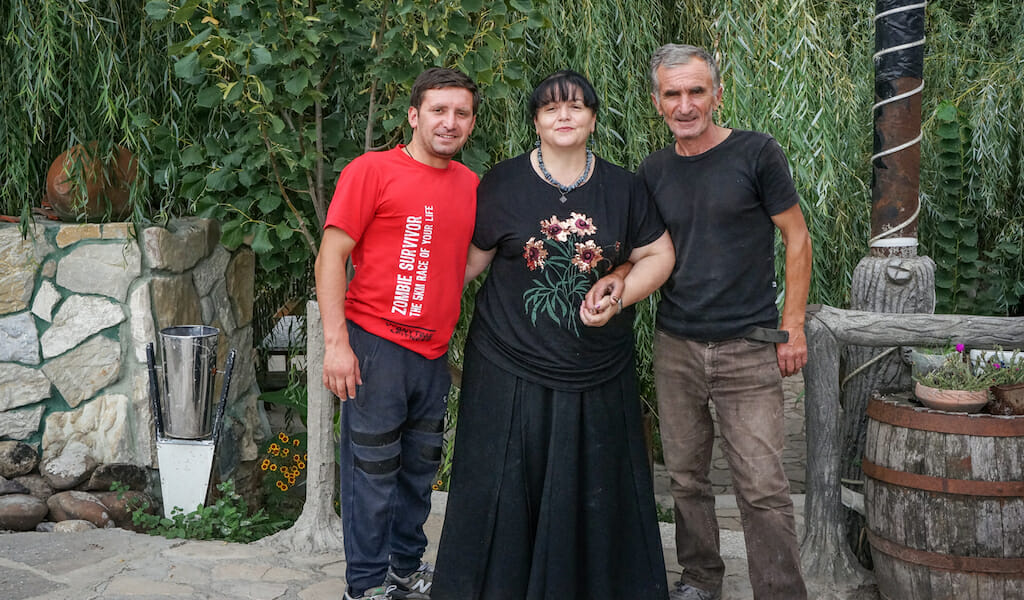 We had no sooner finished unpacking our Tbilisi lives from the car for a Garikula summer, when our neighbor Zakhar stopped by to welcome us with a firm handshake and a bristly cheek kiss. He sat down and immediately told us about a restaurant he had recently visited in Kavtiskhevi, a neighboring village about 12 kilometers away. He was deeply smitten.

“Wha!” he boomed. “The fish, straight from the river! Trout! Delicious! Come on, let’s go. I’ll bring my wine!”

Out here in the Shida Kartli boondocks there are no restaurants, so our curiosity was indeed piqued, but we had some serious seasonal lounging to do first. The restaurant would happen, just not today. Meanwhile, Zakhar, a 71-year-old retired bus driver, kept dropping by and repeating his mantra about this fish joint. We nodded our heads affirmatively as summer floated casually by. “Yes, yes. We will go,” we promised him. 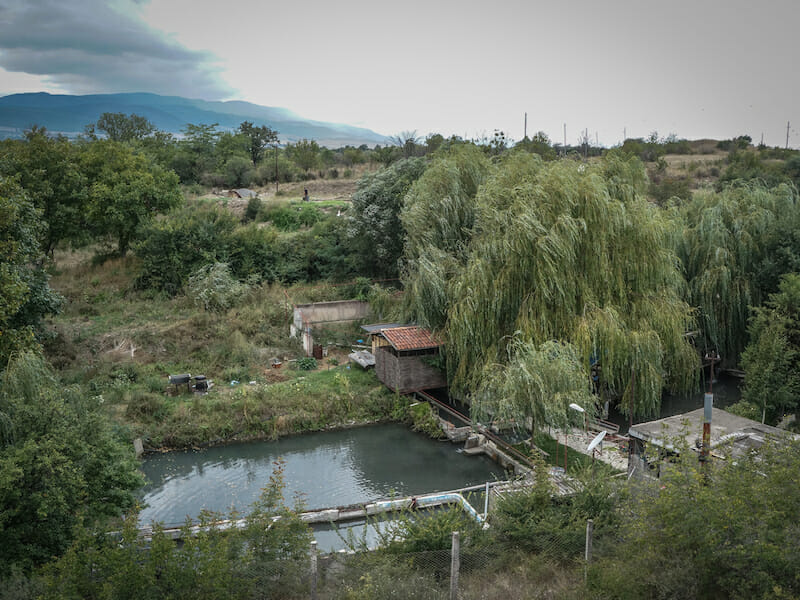 Last week, we bumped into Zakhar at the Sunday bazaar. He was hanging out with the wooden utensil guy, when we were struck with inspiration. Some old tomatoes at a nearby stand reminded us that summer is almost over.

“Hey Zakhar! What are you doing tomorrow? Want to go to Kavtiskhevi?”

“For the fish? Really?” His eyes widened. “Which wine should I bring, white or red? Will five liters be enough?”

Despite its abundance of rivers and a 300-kilometer Black Sea coastline, Georgians are not as big on fish as you might expect. However, studies have shown that people are eating more trout, which you can find on most menus in the country. It will be simply boiled or fried or sometimes grilled and typically served with tkemali (plum sauce) and is usually very satisfactory. But we have never gone to a restaurant solely for its trout.

Ksovrelebis Sakalmakhe, or Ksovreli’s House of Trout, is snuggled in a hidden little dell at the edge of Kavtiskhevi, on the road to the regional capital, Kaspi (the Stone Age cave city of Uplistsikhe is about 20 minutes away). Five years ago, Goderdzi (Godja) Ksovreli, a strong, leathery 50-something, started digging out three ponds from a trickling tributary of the Kavtura River that passed through his grandparents’ front yard. He claims to have about 20,000 trout swimming here, which he sells to local markets, restaurants and people in nearby villages.

Three years ago, Godja, his wife, Tamriko, and son Valeri opened the restaurant here that not only serves the fish they raise, but also pork, chicken, rabbit, duck and lamb from their farm here, too.

“Everything is homegrown!” Tamriko boasts, with her chin raised high. 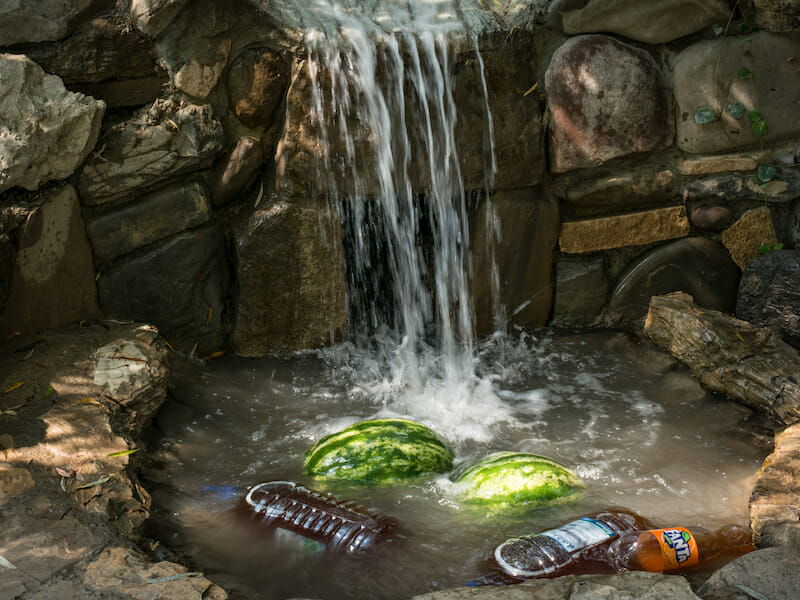 It is a mild, cloudy, late summer day. We sit at a table underneath a lush canopy of weeping willows, the refreshing din of the man-made waterfall behind us. This would have been a great place to come last month, during the heatwave.

The waiter brings out an overflowing bowl of succulent tomato and cucumber salad and fresh bread baked in a tone, on-site. The mouth-watering process begins.

“Where’s my wine?” Zakhar urges, in his megaphone tenor.

Even though Ksovrelebis Sakalmakhe offers their own house wine, customers are permitted to bring their own, which they place in the pool under the waterfall to cool. We asked Zakhar to bring his red, against the principles of pairing because our last experience with his homemade white was not so pleasant.

“I want to drink to Gudja. He made everything here, and it is good, very good.”

Two trouts arrive, pan-fried, no-frills, no grease. Before adding Tamriko’s homemade tkemali, we peel away a tender, flaky portion for an unadulterated taste.

We were immediately transported back to the annual fishing and camping trip we would take with our dad to the Sierra Nevadas, where we would explore its proud rivers and hidden streams and eventually stumble upon a pine-forested Shangri-La to cast our lines. Dad would fry up our catch in a cast-iron skillet on a Coleman stove for dinner. That wild, fresh, almost sweet, delicate flavor of earthly divinity from childhood came rushing back. 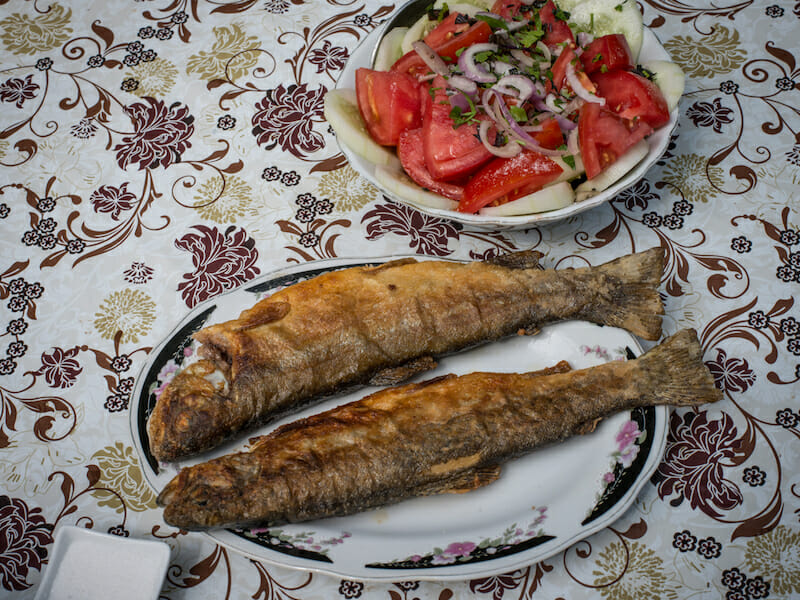 “You like it,” Zakhar remarks with a twinkling eye.

The waiter drops a pair of the saddest kabobs we’ve ever seen on the table. No garnish, just two long black logs on an oval platter. We give them a mercy taste and wham, the superior, deeply savory flavors immediately make our eyes roll. There is a spicy finish as the ground pork and beef melts in our mouths. How can something look so bad yet taste so good?

Zakhar beckons Gudja to join us for a toast, but it takes some effort. This is a man who has work to do ­– there is always work. His hands are gnarled tools, fingers like weathered oak branches. He grips the water glass of wine as if he’s afraid to break it.

“I want to drink to Gudja,” Zakhar bellows, raising his glass. “He made everything here, and it is good, very good.”

Zakhar is not one for eloquence or subtlety. But he is right. Everything here has been great, and we are thrilled he shared his discovery with us. Gudja knocks down half his glass and invites us to come back some evening when “the guy with the Yamaha is playing.”

Oh, we’ll be back alright, but it won’t be for the music. 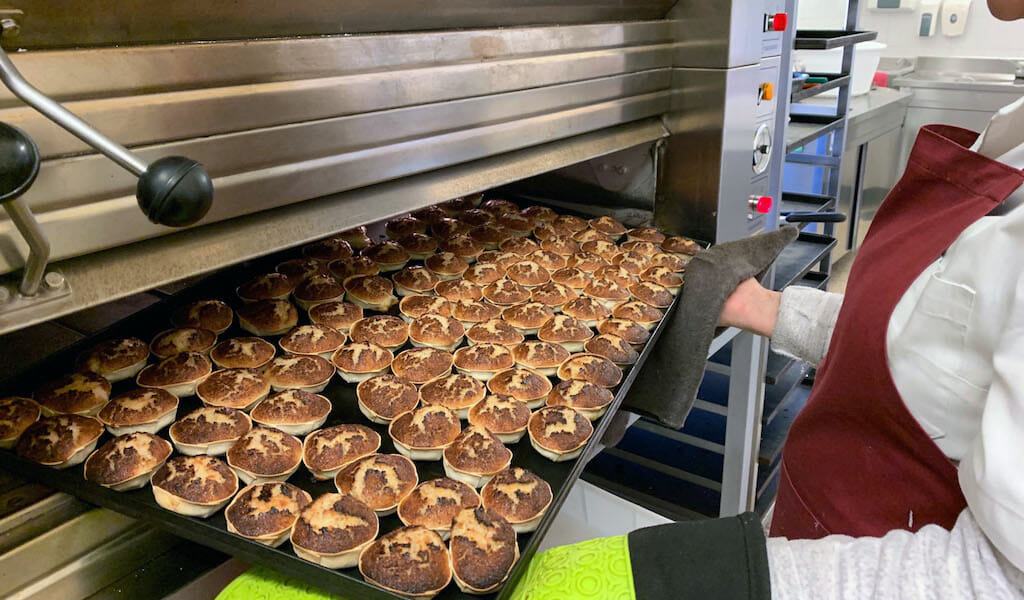 Lisbon | By Célia Pedroso
By Célia Pedroso
LisbonNot many companies baking in Portugal can claim that they’ve been in business since 1756. But Queijadas da Sapa, the first bakery to make queijadas de Sintra, cheese and cinnamon tarts in a thin crust, can proudly display “Since 1756” on their labels and the doorway to their shop. These small and spicy bites are…

Lisbon | By Célia Pedroso
By Célia Pedroso
LisbonThey withstood the phylloxera and the strong Atlantic winds, and are slowly fighting back against urban expansion, so it’s no surprise that a glass of wine made from grapes grown in Colares tastes like no other. The smallest wine region in Portugal, Colares is also probably one of its most distinct. Located on the coastline…
Ksovrelebis Sakalmakhe
Kavtiskhevi, Kaspi Region (no street – best to ask for directions in the village center)
Tel. +995 598 69 19 22
Hours: 10am-midnight