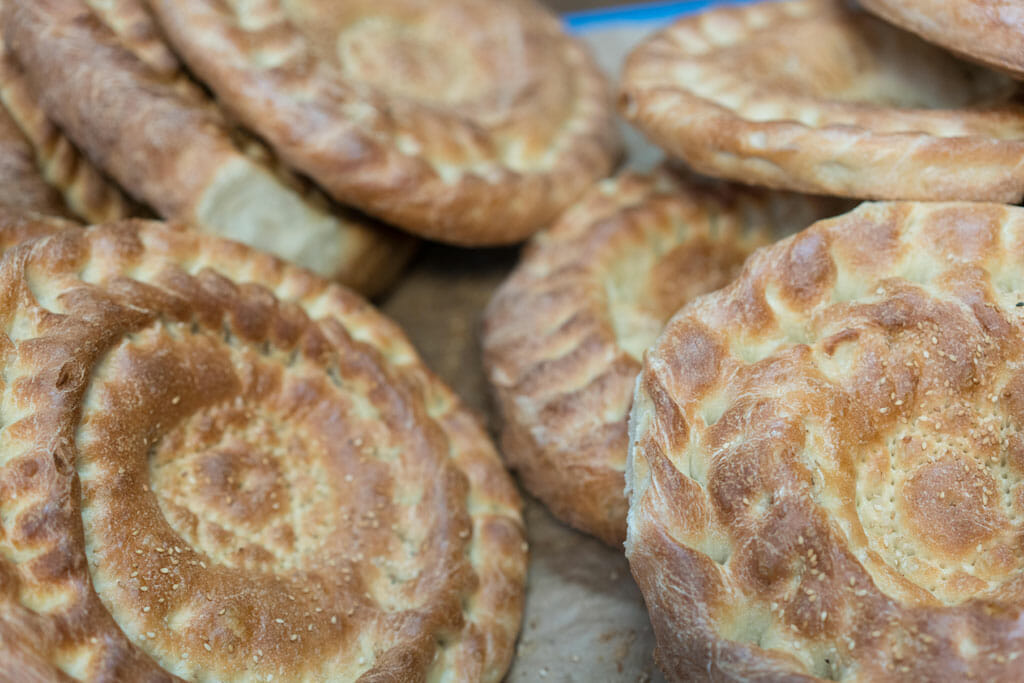 For those interested in visiting Tashkent or Samarkand, an easier trip might involve heading to the Rego Park and Forest Hills neighborhoods of Queens, home to much of the borough’s Central Asian Jewish diaspora. The neighborhoods comprise two main thoroughfares: 63rd Avenue, which changes to 63rd Street, and 108th Street. Both roads have a range of markets, restaurants and bakeries that serve local tastes and evoke places left behind. 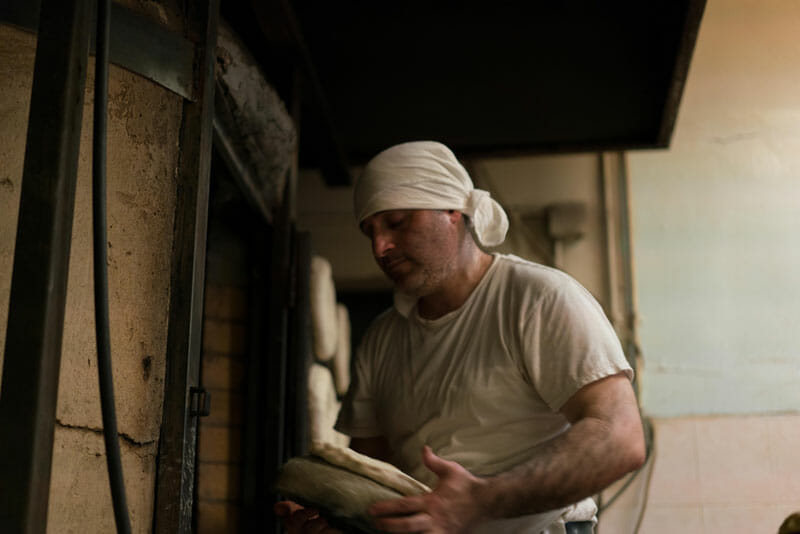 On one recent afternoon, I walked west on 63rd Avenue, away from Queens Boulevard, passing Public School 139 Rego Park, where parents and grandparents spoke Tajik, Mandarin, Arabic, Uzbek and Russian, crowding the street as they await their children’s dismissal from school. I continued west until I reached Austin Street, then took a left and walked past spotless streets and modest brick buildings until I reached Rokhat Kosher Bakery, an essential spot for fresh-baked bread, Bukharan-style. I could smell the bakery before we saw it.

The “only in New York” scene of an Uzbek mother and father, their equally friendly Latino co-workers, Bukharan music and the smell of baking breads greeted me as I entered the shop. Brothers Roshiel and Rafael Samekhov run the bakery together.

They left Uzbekistan and the Bukhara area in 1992 for the United States. Their uncle Jacob already lived here and could sponsor them. “We have a good life in Queens today,” said Roshiel. “I can take care of my family because of this bakery.” In between answering the phone, sending out plastic and boxed batches of fresh toke and non, he continued, “I was also very happy in Bukhara. I was 16, in high school, and there were girls. It was perfect.” With a slight sense of longing, he said, “My father, Suleiman, ran three photography studios. We had a big house, phone and television. But all our friends… Muslims, Jews, everyone, left with the collapse of the Soviet Union. Some went to Moscow, others to Shanghai or Korea. And Rafael, my brother the planner, decided for us, so we, too, left.” 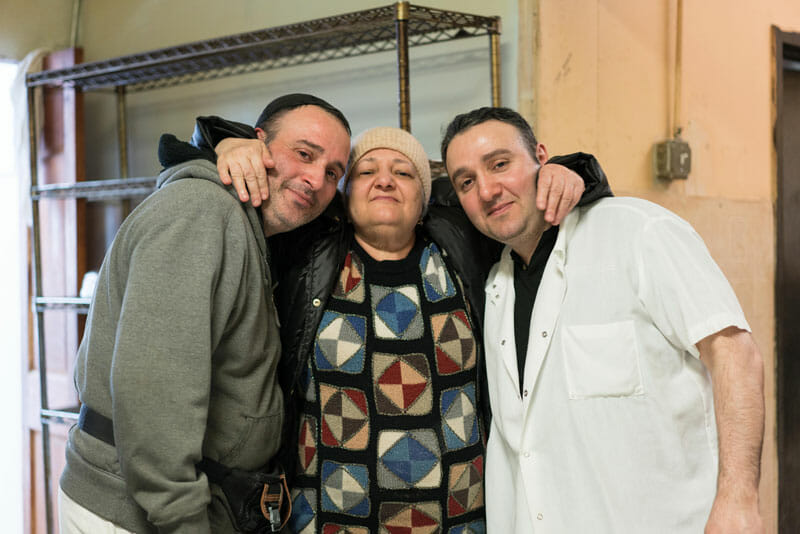 Soon after, his mother, Sarah, arrived to greet us. Her sons ran around the bakery to clean up, monitor the tanoor and tend to customers and vendors. Every culture has songs or poems about food, cooking, planting, or harvesting. I asked Roshiel if he knew any. “Songs, poetry? You want to know if I can recite a poem or sing a song?” Roshiel declared in between cutting the dough, “I do not sing. You ask my mother, ask her for a poem, or a song.” And so with a shy smile and abiding grace, she seated herself, took off her hat, ran her hand over her hair, cleared her throat, and recited a metered Persian poem, a prayer for me, her guest in the midst of her family’s humming bakery.

May the evil eye never reach your beautiful eyes
May misfortune never reach your wine-loving mouth
I have one wish to ask of God
That my darling children should never be harmed
Oh majestic oak, may I become a shadow under your trunk
May I wind up around your fair neck
For how long you ask?
Until the end of time
You are my gentle whisperer, Sarah dear,
Your joined brows are the apples of my eyes
I ask God to see your fair face again
May I turn into a night candle and listen to your conversations at night

So on a Friday morning, before Shabbat, get your weekend supply of non, samsas, toke breads and other savories and sweets, all made by hand and baked in the Rokhat Bakery tanoors. And who knows, you may even be blessed with a Persian praise-poem from Sarah Samekhov, if you are lucky.

(Special thanks to Muhiba Rabejanova for the translation of the poem. Additional funding for this piece was provided by The Sillins Family Foundation Grant.) 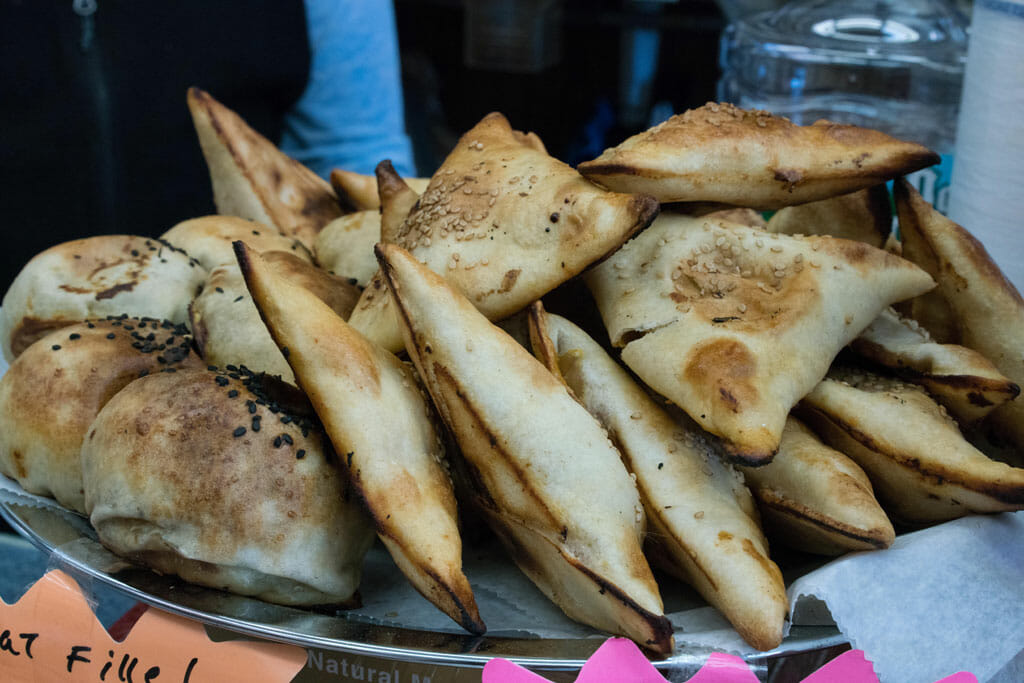 Queens | By Sarah Khan
By Sarah Khan
QueensRego Park and Forest Hills are home to much of Queens’ Central Asian Jewish diaspora. The neighborhoods comprise two main thoroughfares, 63rd Avenue (which changes to 63rd Street) and 108th Street. Both roads have a range of markets, restaurants and bakeries catering to local tastes. Here are a few notable addresses. Queens Gourmet Bazaar Food…