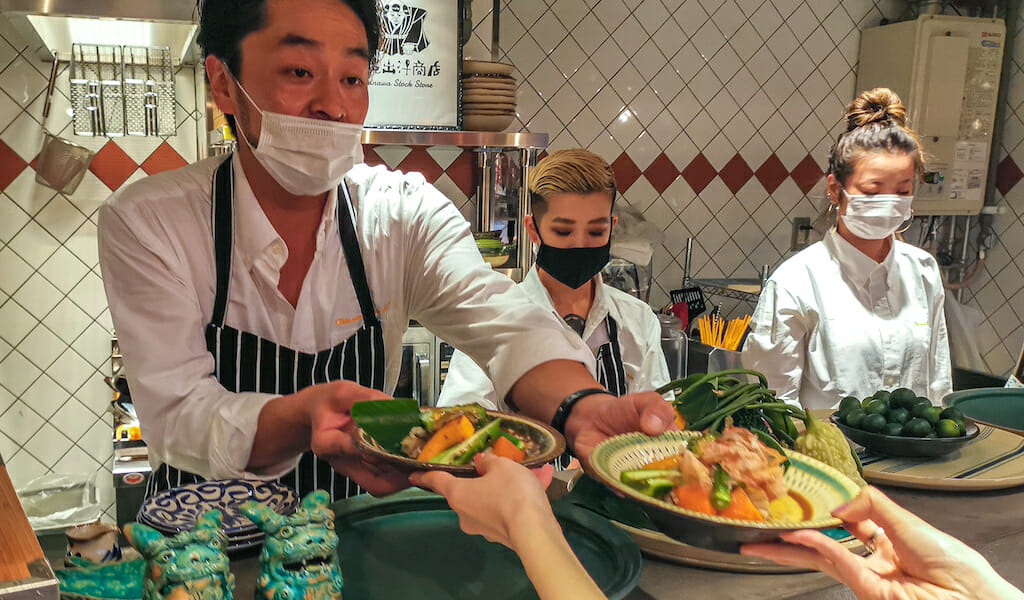 At a sleek counter, diners are perusing a menu of modern Vietnamese cuisine with a Japanese twist to be paired with sake. They might begin with something light – delicate rice paper rolls filled with shogayaki, ginger-fried pork and a Japanese home cooking classic – before moving onto a modest portion of motsuni – a dish of beef intestines stewed until tender – enhanced with tamarind and spiked with cloves. The chef smiles across the counter as he prepares the next dish, and then asks how they like the pairing with a robust yamahai sake.

Just a few paces away, a similar scene is playing out at another counter restaurant and another, with diners hopping between them. Two floors of tiny restaurants are tessellated into a modern, stylish space. The set-up is at once both intimate and informal; there is no commitment to full courses or conversations, and part of the fun is working out which place to sample next. However, while the set-up might look like yet just another modern food hall, the underlying concept marks a growing trend within Tokyo’s dining scene to turn to the city’s past for inspiration.

This is The Restaurant, a collection of 17 restaurants occupying the first two floors of Eat Play Works, a co-working space and members’ club that aims to combine exactly what its name suggests. The project opened in the upmarket Hiroo neighborhood in southern Tokyo in late July, and was first conceived by Morio Inoue, President of the Salt Group, which oversees hospitality projects domestically and internationally, with the goal of introducing Japan to the world and vice versa. 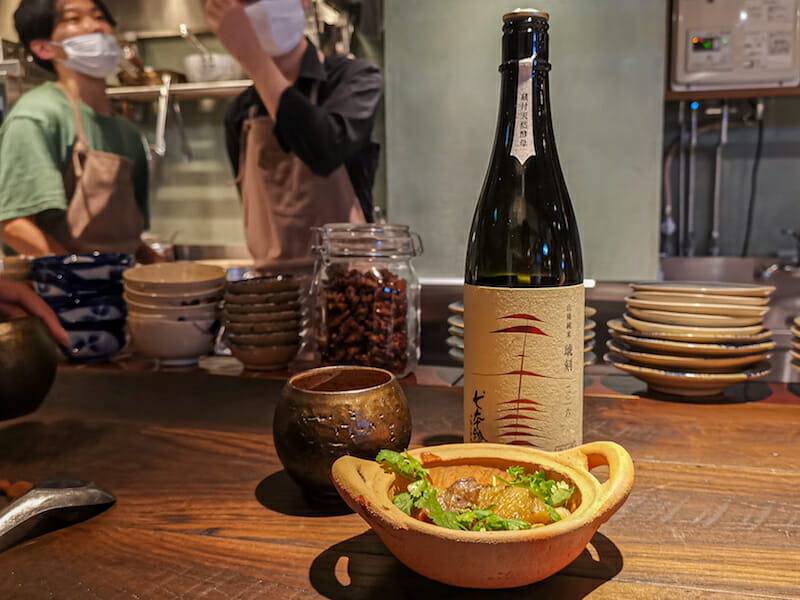 “I hate waiting a long time to go out and eat at restaurants,” says Inoue about the decision to create a more casual dining space. “Before the coronavirus, every time you wanted to go to a delicious restaurant, you would have to make a reservation months in advance or it was impossible. I wanted to be able to eat food of that kind of quality more casually and simply.”

The project expanded through the grapevine as friends invited friends (including many well-known chefs), with Inoue striving to ensure that a variety of different cuisines were represented. This explains the sheer diversity. There are several Japanese options, such as soba (buckwheat noodles) and succulent tonkatsu (breaded deep-fried pork cutlets). Yet one bar-hop away is Salam, which serves up modern vegetarian Middle Eastern cuisine, while its neighbor, Shogun Burger, tantalizes diners with the “smash burger” technique, theatrically squashing onion-topped ball-shaped patties on the griddle.

For Inoue, the key idea is not competition but collaboration, and he believes the shared space will help all those involved develop. While still in its early days, the team is working to encourage more restaurants to offer menus with a wider variety of otsumami (small dishes served with alcohol) and smaller plates to encourage more hashigo, the Japanese-term for bar hopping, and there are plans to develop a collaborative menu for the terrace space.

Yet despite the modern, shiny space, the fundamental ideas behind The Restaurant are rooted in downtown Tokyo’s grimier past. The inspiration behind the layout of narrow counter bars that encourage direct interaction between barman and customer, and between customers themselves, is drawn from yokocho, narrow lantern-strung alleyways that bathed Japan’s Showa era (1926-1989) in an orange light. The stylish Toranomon Yokocho, which opened in the skyscraper complex of Toranomon Hills in June, presents a very similar offering to The Restaurant: upscale and popular restaurants present scaled down, casual menus with small plates to encourage diners to frequent several stores in one night. However, its name is explicit about the atmosphere it aims to invoke. 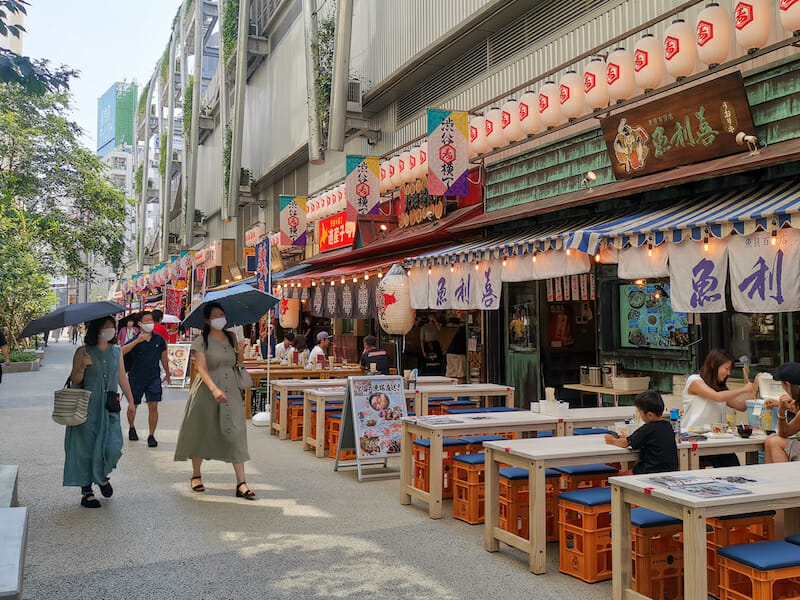 Beyond these relatively upmarket ventures, the so-called “yokocho boom” or “neo yokocho” that plays to an upwelling of nostalgia for the Showa era can be traced back to the opening of Ebisu Yokocho in 2008. Yoshinori Hamakura, who started his career by overseeing the renovation of a traditional Kyoto cuisine restaurant at the tender age of 18, came up with the idea of turning a derelict public market into a bustling nighttime space crammed with eateries and watering holes open late into the night. Just this month, his company opened the 100-metre Shibuya Yokocho on the ground floor of a large new shopping and leisure development, Miyashita Park. With an emphasis on farm-to-table and putting producers in the spotlight, each of the 19 restaurants represents a different kind of Japanese cuisine, reflecting a growing interest and pride in regional dishes.

Hamakura’s indoor yokocho bear a strong resemblance to the alleyways of yore. Ramshackle wooden tables are crammed into slightly shabby spaces, with handwritten papery menu slips plastered to the wall illuminated by a scattering of lanterns. The aim is to offer simple cooking using regional produce in a distinctly unpretentious environment, targeting no demographic in particular, and thus aiming to appeal to all. The vision is that Shibuya Yokocho will create a community of producers, restaurants and consumers, and, despite the difference in style, these goals also ring true for Eat Play Works. Inoue hopes the project, designed as a “shotengai [traditional shopping street] within a shotengai,” will foster a new kind of community between both chefs and customers.

Yet despite the modern, shiny space, the fundamental ideas behind The Restaurant are rooted in downtown Tokyo’s grimier past.

Given the timing of these new openings during the coronavirus pandemic, the elephant in the room is that none of these places can fit an elephant in the room… or even a large dog. Predicated on the intimacy provided by narrow spaces and close-quarter dining, it may seem surprising that so many have continued with their openings. Japan’s coronavirus first wave was relatively mild when compared to Europe or the United States, and no firm lockdown was implemented, with many restaurants staying partially open even during an emergency declaration. But businesses are suffering as the country enters its second wave of infections and the entry ban on overseas tourists continues. 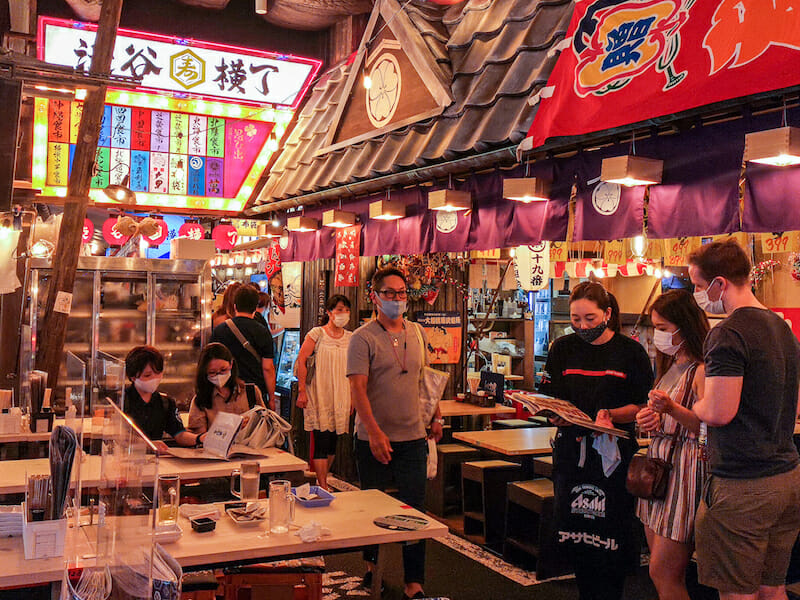 While the immediate future remains uncertain, these new spaces are a testament to a hunger in Japanese society for something beyond the usual restaurant experience. It is an appetite that spans generations, as many new customers are simply too young to have actual nostalgic memories of the Showa era and bar hopping in alleyways. Some commentators attribute this trend as a reaction to the coldness of everyday life and the impersonal style of digital communication. Inoue, an advocate of Japan’s “analog culture,” agrees.

“I think it’s to do with the human connection,” he says. “Because nowadays there’s less of this kind of connection, especially due to the wide use of computer and information technologies. So I think [yokocho] actually emphasize the importance of face-to-face interaction. That’s why I put an emphasis on dialogue and communication, especially in counter-style restaurants, because when you hop between restaurants next to each other, conversations happen naturally. And it’s also a fun experience.”

In a cityscape of sleek malls, well-oiled infrastructure and brutally long work hours, perhaps Tokyoites are searching for a bit more balance in daily life. Eat Play Works might be more than just a stylish new opening but its very name could be seen as a mantra. If nothing else, dining out should definitely be about fun, and bar hopping while chatting to your neighbor is exactly that. Tokyo | By Fran Kuzui
By Fran Kuzui
TokyoQuick bite: Our food tour in Tokyo will take you on a journey that serves as an edible survey of the city’s culinary past, present and future. In order to fully appreciate Tokyo and its deep food scene it’s necessary to not only peek behind the curtain of yesterday, but also join the constant flow…