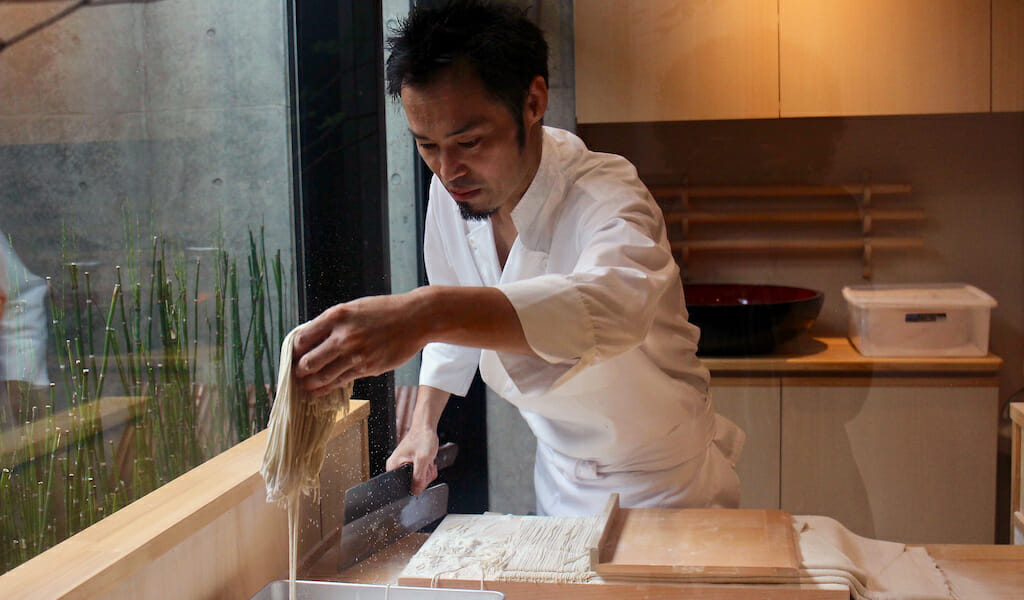 Ramen may have seen a worldwide boom in recent years, but when it comes to soba – Japanese buckwheat noodles – fans might say they’ve been unfairly neglected.

“Soba have a history of at least 400 years, as long as sushi. Yet they’re almost completely unknown abroad,” chef Yoshinobu Saito says, pondering the concept behind his first ever restaurant. “I guess I don’t have a specific concept for the store. But I do want to promote soba worldwide.”

Saito is clearly an ambitious man, as he only opened Soba Kaiseki Gi, located in the stylish area of Ebisu, in late April. The sleek pale-wooden counter and backlit bottles of sake establish this as a modern yet unmistakably Japanese restaurant, which does exactly as its name suggests: soba for lunch, and kaiseki, a traditional multi-course dinner, with – in this case – buckwheat playing a starring role.

Yet the menu hints of overseas influences. A seasonal special, Italian truffle soba looks every bit as luxurious as it sounds. Handcrafted noodles are neatly folded in on themselves, glistening in a lightly creamy sauce, topped with an onsen tamago (an egg cooked slowly inside its shell in hot water), finished with elegant shavings of truffle. The ingredients perhaps whisper to memories of Italian summers, but the earthiness of the soba noodles tie the dish firmly to its roots in Japan. 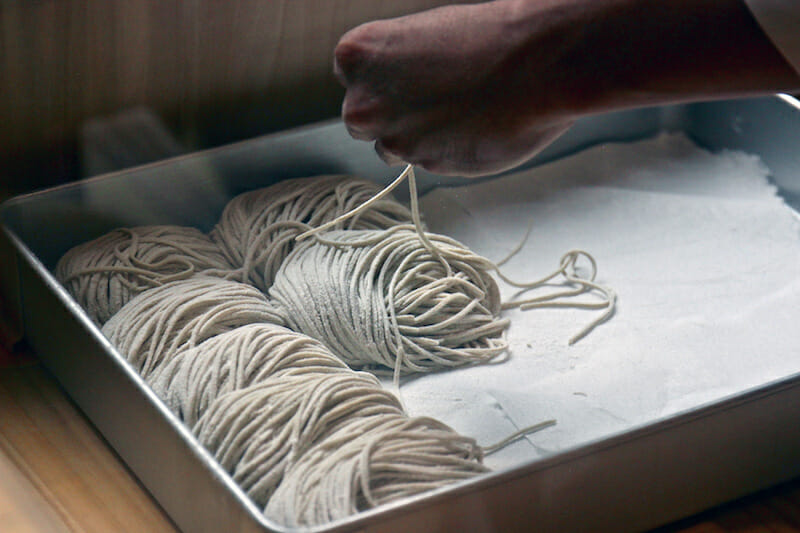 Every morning, Saito rolls out 20 portions of soba by hand at a large stone basin behind glass and set up like a stage at the front of the store. (The 20 portions are for the lunch service; he makes more soba before dinner.) Although tucked down on a basement floor, his deft movements sometimes catch the eye of passers-by, who peer down at the performance.

Looking at this figure clad in chef whites, deftly crafting quintessential Japanese dishes, it’s hard to believe Saito’s first culinary love affair was Mexican. Like many a youth, he was at a loss for what to do, and at the age of 19 took himself off to Boston to study sociology. Enchanted by the Mexican cuisine he encountered, he later moved to New York to pursue it, although he had little success. This spurred a drastic U-turn: returning to his Japanese roots, he joined Masa, the only sushi restaurant in the U.S. to have three Michelin stars to its name.

“If I hadn’t felt so uncomfortable, I probably would never have gone into Japanese cuisine,” says Saito of his year spent in New York. This feeling is something he struggles to explain. He didn’t experience discrimination; nor did Masa’s habit of quickly firing people put him under pressure. On the contrary, the absolute zeal and dedication to washoku (Japanese cuisine) that he witnessed only served to fuel his own fervor.

Yet that indefinable sense of discomfort led him to carve out a career of more than 13 years specializing in soba and kaiseki.

“True pros are able to adapt their cooking to the tastes of wherever they’re serving it.”

Dinner at Gi begins with tofu – this time with turnip to reflect the autumnal season – simmered with Japanese tiger prawn. It’s topped with a light dashi (fish stock) jelly that sets the tone for an entire menu flecked with creativity. Saito’s latest invention is soba bread, hot and crumbly with a walnut sauce. Next comes matsutake mushroom tempura with a warm, nutty flavor, deepened by truffle salt. Nestled next door are two autumn salmon and potato manju (flour dumplings) – there’s an edge of smokiness that rides the creamy texture of the egg batter.

The most striking example of experimentation arrives in the form of a monaka – a shell-shaped wafer, usually filled with ice cream – but this time accompanied by foie gras. Despite the shock factor, the dish has clearly been thought through – the foie gras has a consistency between a dense mousse and ice cream, smooth and disconcertingly creamy, its richness counteracted by sour umeboshi (pickled plum).

The highlight, however, is the sanma (Pacific saury), a fish known as the definitive taste of Japanese autumn. The skin is perfectly crisp, and its flesh soft and fatty. Alongside lies a slice of lotus root, shockingly pink, thanks to having been cooked in red wine. Virtually unheard of as an ingredient in Japanese cooking, its warm, robust flavor weds the sanma as naturally as one might enjoy a glass with roast lamb. 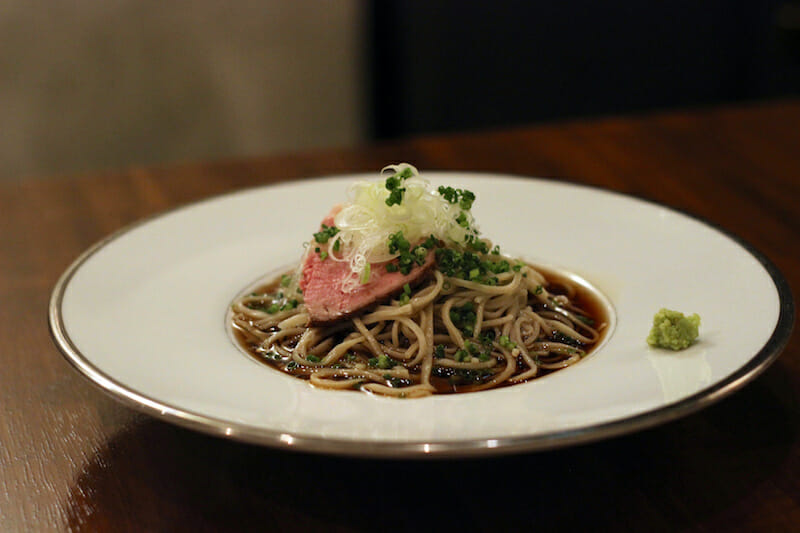 Finally, the “shime” arrives – the closing carbohydrate course that marks a pause before dessert. Here, diners have two options: seiro, chilled soba served on a bamboo mat, or the seasonal special. This turns out to be slices of duck, cooked pink, on top of soba in a light dashi broth. The portion is generous, the flavors distinct yet refreshing, enhanced by wasabi.

Dessert is normally a minor affair at kaiseki places – sometimes only a slice of fruit – but Gi ups the game with a selection of dishes. The monaka appears again filled with exquisite coffee and soba mi (buckwheat groat) ice cream, matcha crème brûlée is finished with a perfectly crisp caramelized top, and pillow soft warabi mochi – a kind of clear, sweet rice cake – melts over the tongue.

The experimentation is never overdone – the cooking gently nudges the boundaries of washoku but never trespasses. It’s a skillful act that leaves the diner with an indescribable feeling of something just a little bit different.

While Saito says he is most proud of his truffle soba, he admits it got mixed reviews, and that makes him cautious. “There are a lot of egotistical people in the food business. People who say ‘Eat my dish!’ But from my time in the U.S., I realize I can’t say as a Japanese person that this is delicious, because how can I judge for American tastes or other countries? True pros are able to adapt their cooking to the tastes of wherever they’re serving it.”

Fascinated by the different palates of different regions, he dreams of sending soba abroad – perhaps to France – to see people enjoy it as eagerly as ramen, even if it evolves in its new surroundings. In the meantime, at Gi, each season presents a new creative challenge, and a chance to mix Japanese flavors with tastes that tug at memories of far away places.