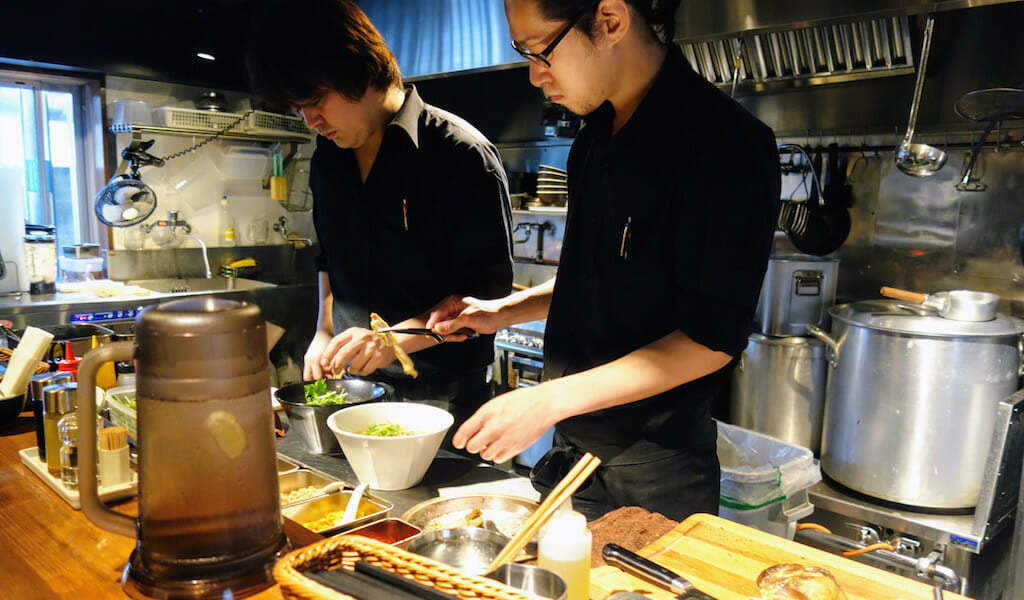 Unusual takes on ramen abound in Tokyo, from carefully balanced chocolate and lamb creations for Valentine’s Day to algae-tinted blue broth, but few leave you with cravings and daydreams lasting for weeks. Adding a quality twist on ramen is a challenge – simplicity is one of the dish’s most vital elements, as with most Japanese cuisine.

Yet friends Yamada and Sumida struck gold with one perfectly measured twist: smoke. Tucked away near Rikkyo University in a quiet area filled with student-friendly restaurants and cafés, their modest ramen joint Kemuri (which means “smoke” in Japanese) serves their latest experimental dishes without straying from the joy of good ramen at its best – quality ingredients cooked to perfection. With jars of soy sauce bubbling in the background and a smoky chest filled with promises, the theme is clear, but manages not to be overwhelming.

Offering only counter seats with a small standing section, the intimate setting makes newcomers feel like locals, with many spending entire evenings working their way through the temptations of the ever-changing menu. Alongside a variety of spirits and simple cocktails, they serve the initially unexpected option of Guinness; but one sip of the dark, wheat flavor and you realize it’s the perfect partner to their smoky bowls of ramen. The impressive selection of spiced rums and Japanese gins are a further surprise, offering the non-beer lovers among us a sophisticated option for the evening. (Based on their excellent drinks menu, it’s no surprise that the restaurant relaxes into a bar at night.) 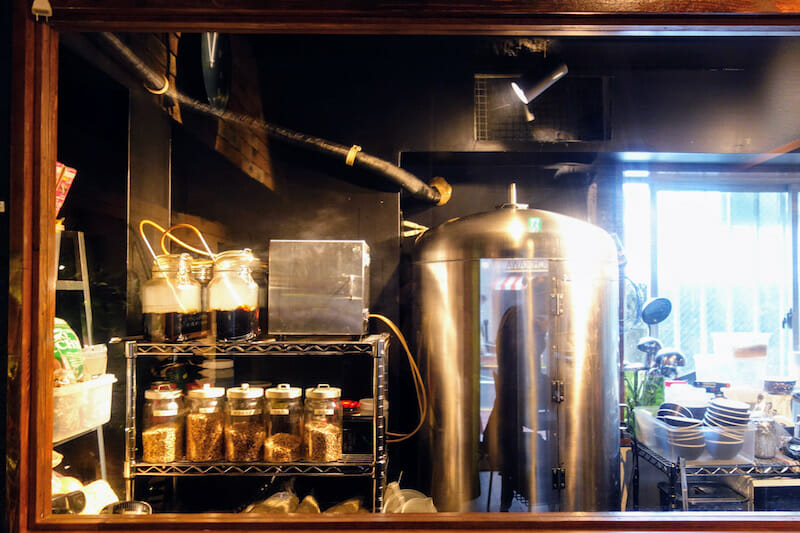 The friends, who started out as co-workers at a ramen chain, were keen to step out on their own. “We wanted to make our own ramen, but it seemed like all the ramen places were the same,” Yamada explains. After their workplace trialed a new smoky ramen, they were inspired to take the idea to the next level. Through trial and error, they perfected their core ingredients – soy sauce that has been smoked for around six days to reach the perfect depth of flavor, as well as eggs and mushrooms that have been given their chance in the smoking chamber, too.

Whether you come hungry enough for the ramen or prefer a few tapas-style bar dishes, the variety will ensure you return for whatever you couldn’t manage. Having arrived late in the evening and ravenous, we opt for both – a few smaller dishes followed by the smoky shoyu (Japanese-style soy sauce) ramen.

We hadn’t planned on late-night ramen, but catching sight of the bubbling bottles of shoyu in the smoking area is temptation enough – it looks like something out of a science lab. With a large smoking chamber used for the eggs, mushrooms and other solid ingredients, the soy sauce takes a different route. Pipes from a smaller chamber funnel smoke directly into sealed containers of the sauce.

The small bar dishes, which come out first, end up being more than just a stopgap. The simple pleasure of smoked cheese, dusted with black pepper and a drizzle of oil is the perfect place to start, with smoked squid eggs offering an unusual texture that soon became addictive.

“You can’t really go wrong with smoking, the worst that can happen is it doesn’t taste good.”

While there are some popular staples on the menu, new items are trialed and tested all the time. “We experiment with all sorts of things,” Yamada explains as he prepares some ingredients near the counter. “We’ve tried crisps and even sweets: once we smoked a pumpkin quiche and ate it with honey. We’re always trying new combinations. You can’t really go wrong with smoking – the worst that can happen is it doesn’t taste good, so we try something else.” The inquisitive and almost playful approach of the two friends is a refreshing alternative to most restaurant menus, which often remain unchanged for years at a time.

Part of this open approach means that diners are encouraged to share their thoughts and offer suggestions, with many becoming trusted regulars. Yamada relishes the opportunity to chat with them, he adds, telling us it’s one of the highlights of his job.

As we watch our ramen being carefully assembled, however, it’s clear that their experimental ways don’t mean the dishes aren’t taken seriously. The counter seats offer the perfect view of the chefs at work throughout the evening, and their careful preparation of each dish reflects their investment in their venture. 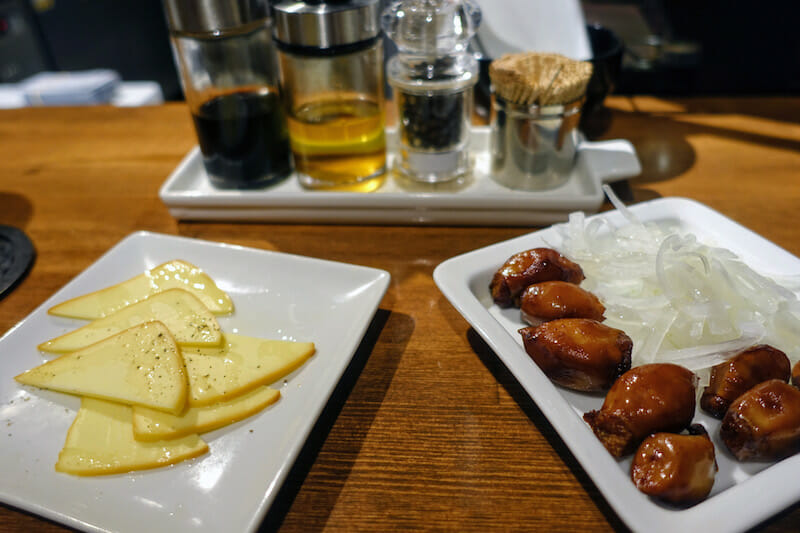 At last placing the steaming bowls before us, Yamada explains the different ingredients and gives his personal recommendation for seasoning. Pointing out the bottles of smoked olive oil and black pepper, he says to add both halfway through our meal, as only then will we be able to appreciate the changes in the flavor profile.

Surprisingly light, the broth is complimented perfectly by the subtle earthy flavors of the mushrooms, the creamy egg yolk and the tender pork. Topped with saffron and fresh greens, the balance is brightened, and the possibility of improvement seems unlikely. When the time arrives, however, we dutifully sprinkle pepper and add the olive oil, instantly realizing our doubts were unfounded. While smoked flavors can easily overpower and become sickly, the subtle levels managed in each ingredient ensure this is never the case. Adding a slightly bitter, nutty touch, the olive oil is truly delicious, while the pepper lifts the pork with a soft, fiery touch.

As Yamada chats to a customer about possible new flavor combinations and Sumida prepares noodles, the atmosphere is one of slow satisfaction – warm and welcoming with a relaxed simplicity. Kemuri has found its niche in careful flavoring, honest experimentation and a sophisticated take on a traditional fast food.

Istanbul | By Lorenza Mussini
By Lorenza Mussini
IstanbulWandering around the neighborhood of Çarşamba, home to a famous weekly market and close to the sprawling Fatih Mosque complex, we get the distinct impression that this area is honey central: the streets are lined with shops selling the sweet nectar, particularly stuff coming from the Black Sea region. “This area is full of honey…
Kemuri Ramen
1F, 5-22-2 Nishi-Ikebukuro, Toshima-ku
Tel. +81 3 6912 8373
Hours: Tues.-Sun. 11:30am-3pm & 5-10:30pm