A Sake and Oden Specialist in Kakurazaka | Culinary Backstreets 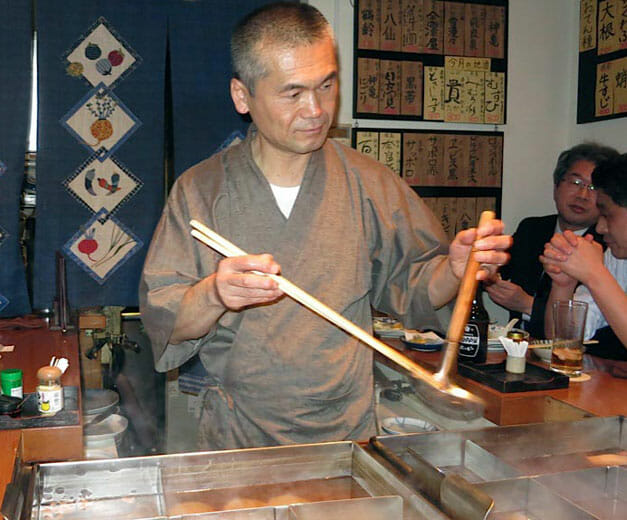 Den is either a really cool sake bar that serves amazing oden, or an oden-ya that has a fabulous sake list. Either way, it’s a great place to taste the best sake from around Japan and devour perfect oden that’s made to order in the little kitchen behind the noren curtain.

People flock to the Kakurazaka section of Tokyo at night seeking good food and a place to settle in for an evening of drinks and gossip about the workday or current events. One night we emerge from the Yotsuya metro station and find ourselves marching behind a swarm of dark-suited salary men swinging inevitable attaché cases as they bustle up a narrow street lined with bars and restaurants. The men veer off into a Korean barbecue joint, and we turn the other way to descend a narrow flight of stairs to Den.

An ample U-shaped counter occupies the entire space and seats a maximum of 12 people. There is barely enough room to squeeze between the wall to alight on a stool. There’s so little space that coats, business cases and handbags need to be hung on hooks along the back wall. We’re in luck, though: Tonight there are some empty stools and we snag a corner in front of the oden pot. 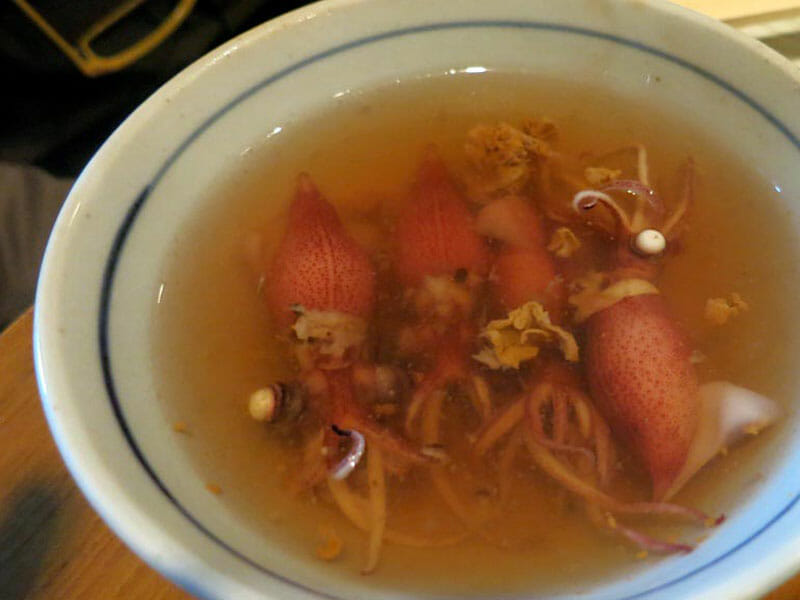 Someone remarks that warm weather is the best reason to drink beer, and draft beer gets dealt all around as quickly as possible. The oden master issues us a piece of paper and pen and asks us to make a list of what we want to eat. This is not a traditional oden-ya – our host is happy to slip chunks of Camembert cheese or cherry tomatoes into the broth. He excitedly reports that hotaru ika, or baby squid, are in season and he’s happy to drop a few into the pan to steep for a few minutes.

A small plate with Japanese cucumbers appears. We use them to spear a mound of crushed ume plums laced with wasabi, the perfect accompaniment to beer. The star of the menu is the sake that follows the beer. Small wooden blocks posted on the wall announce which bottles our host will be opening that evening. Many sake aficionados insist on sake served chilled or at room temperature. Here it is served in small chilled glasses, overflowed into a glass saucer to show abundance overflowing. The master retrieves the bottle we’ve ordered from and presents the label for inspection. Glasses filled, he starts to dive into the oden pan to fill our order.

The door opens and two regular customers enter. The oden master shouts his greeting. Then his wife, who has been laboring over oden materials in the miniscule kitchen, pokes her head out and welcomes the duo.

We began with wakame seaweed and a block of tofu with the beer. Now that we’ve moved on to sake, the baby squid and ethereal chicken meatballs appear. The cheese has been marinating in the broth long enough, and we can pick it up with our chopsticks in stringy bits from our plate. 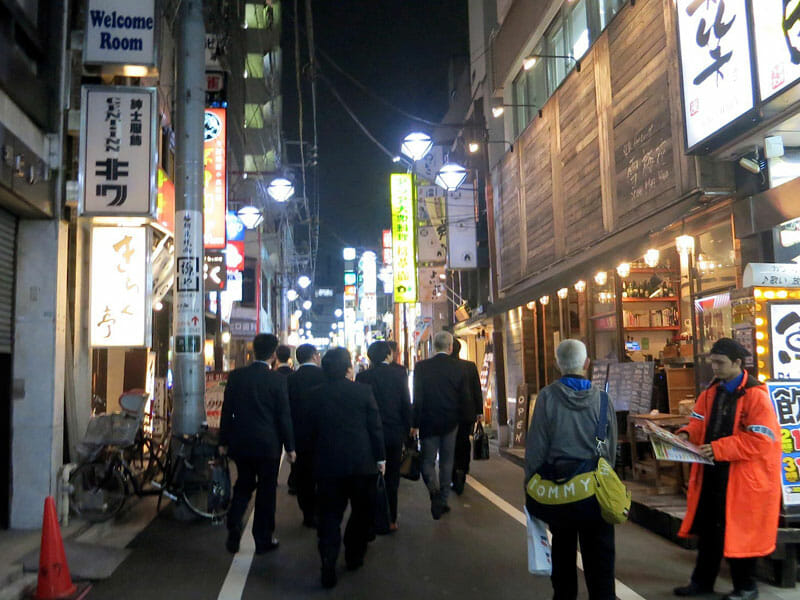 The door opens again. It’s three more guests. Everyone at the counter decides that the new people must be served and we begin to relocate and squeeze together to make room. It seems impossible that three more can cozy up to the counter, but somehow we all want them to join the party. One woman, who has definitely had enough sake, remarks that this is turning exciting.

More exciting are the tidbits that are still flowing from the oden pan and the different sakes the master is pulling out of the kitchen. The master ceremoniously presents the bottle and explains what we are drinking. We began with Tokishirazu from Fukui prefecture. It’s slightly dry and tangy. We move on to Shinkame sake from Saitama prefecture. The brewery has been in business for over 150 years, and this is an iconic label. We opt for the usual sake and forgo the nigori version of milky sake that’s been offered from the bottom of the sake taru, or keg. This sake is slightly fruity and rich. Rounding out the night is Hiraizumi from Akita prefecture. Ours are the last glasses from the bottle and we notice envious eyes watching our enjoyment of the vibrant aroma.

People are lurking outside the door. We know it’s time to allow others in and pay our tab and head up the stairs. Den does not have menus or signs in English. That said, they are welcoming and happy to have everyone join the fun. Just point or else choose to relax and let the owner and his wife feed you and pour for you. 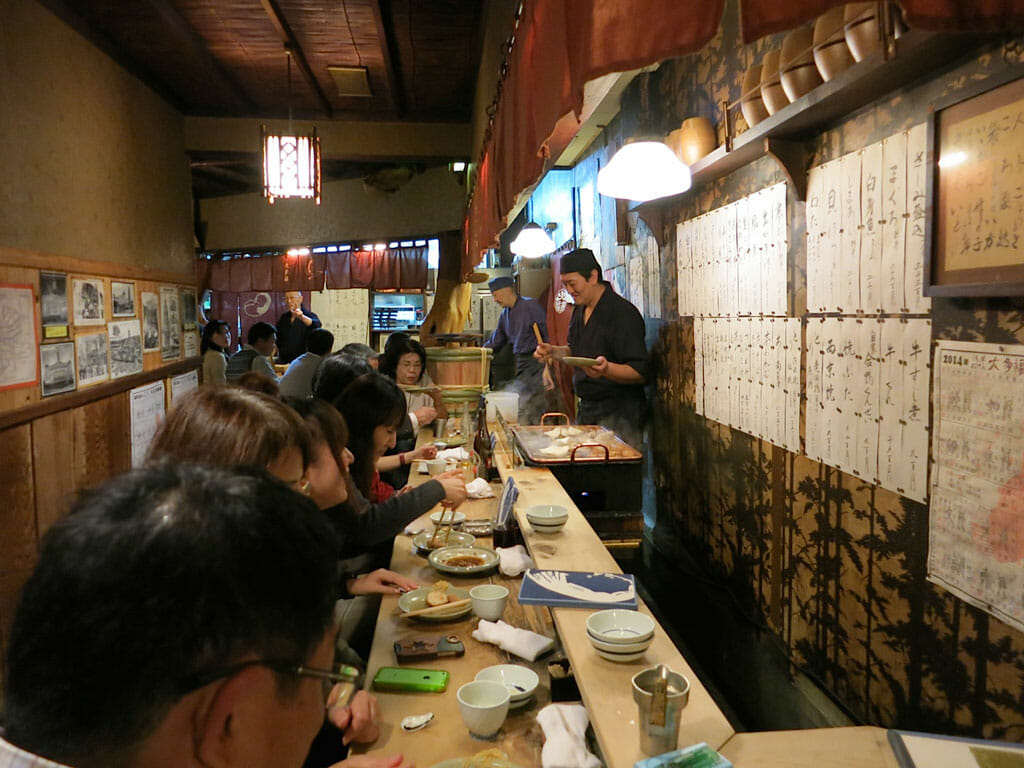 Tokyo | By Fran Kuzui
By Fran Kuzui
TokyoThe weather is turning cold and Japan’s convenience stores, or konbini, have hauled out the oden service pans and positioned them next to the cashier counters. For those not familiar with oden, the sight of assorted flotsam and jetsam afloat in a clear broth and the fishy aroma impinging on their space while paying for… 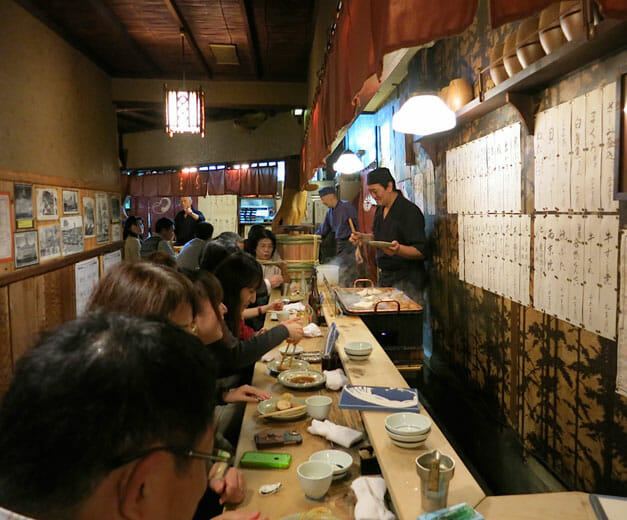 Tokyo | By Fran Kuzui
By Fran Kuzui
TokyoEditor’s note: In the first installment of a series on food in Tokyo, part of our ever-expanding Elsewhere coverage, our correspondent writes about a century-old restaurant whose specialty is a traditional winter stew. The weather is turning cold and Japan’s convenience stores, or konbini, have hauled out the oden service pans and positioned them next…