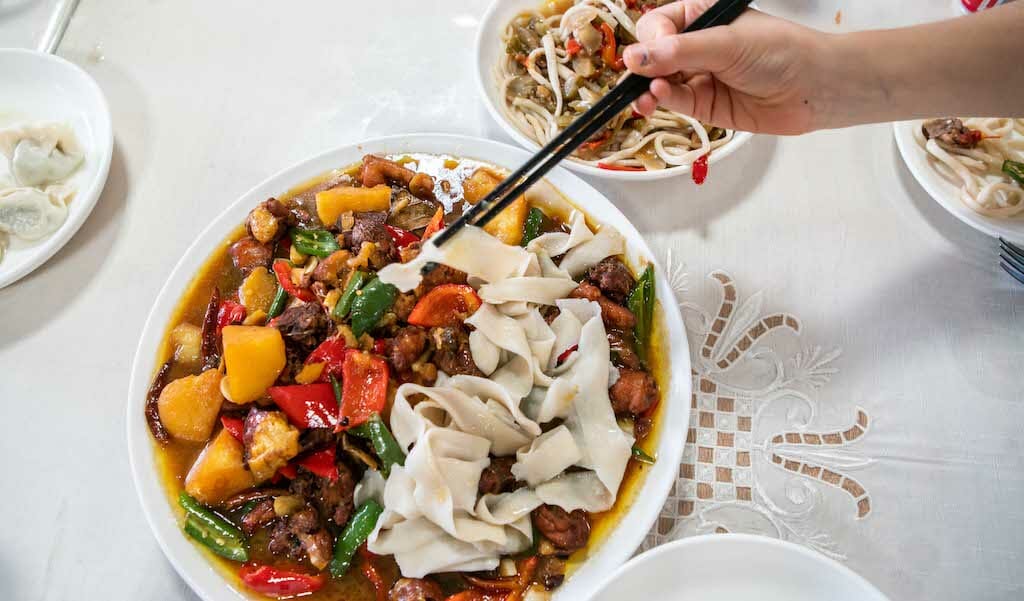 When it first opened in 2017, Hualing Tbilisi Sea Plaza was supposed to be the largest shopping mall in the South Caucasus. But all signs suggest that the gigantic commercial center has yet to live up to its great expectations, with one journalist noting that at times “shoppers were outnumbered by shops.”

The mall was one of the flashy elements of a $170 million investment by the Chinese Hualing Group that went into transforming 420 hectares of a desolate eastern Tbilisi suburb called Varketili into Hualing Tbilisi Sea New City, with developments that included a colossal glass-shrouded 5-star hotel, rows of 10-story residential complexes and expansive avenues that abruptly adjoin wiggly side streets at the borders of the project site. The situation has changed very little since then, if not made even worse by the pandemic. The only perk to this rather garish suburban extension is that it birthed Tbilisi’s de-facto Chinatown.

Although Hualing plaza still remains largely empty within, a handful of spartan Chinese groceries and eateries have cropped up in the outdoors strip mall behind the main building. Among them is Xinjiang Sasadilo, an unassuming eatery that’s been steadily serving up authentic Uighur dishes from the far western Chinese region of Xinjiang – including its trademark hand pulled lagman noodles – for the past four years. 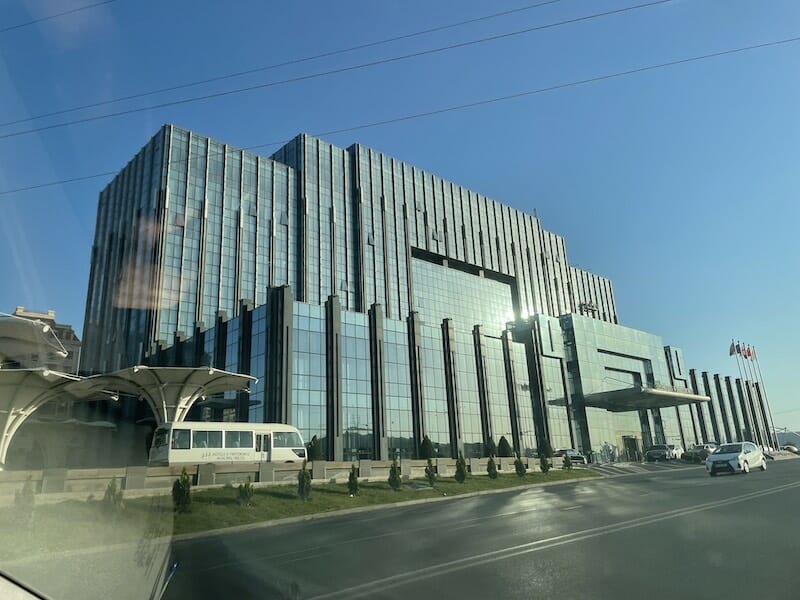 or “Xinjiang taste” in the Georgian script). But inside, the food is far from ordinary. Our first plate of lagman here took us back to a months long trip across China back in 2009, where we quickly learned that we could satisfy our noodle cravings by eating at the Uighur joints found in every city. Despite historic discrimination against Uighurs and the ongoing heavy crackdown on freedom in Xingjing, the region’s cuisine is appreciated across China.

The origins of this seemingly out-of-place Uighur joint, however, has little to do with the internment and persecution dissenting Uighurs in Xinjiang have been facing. 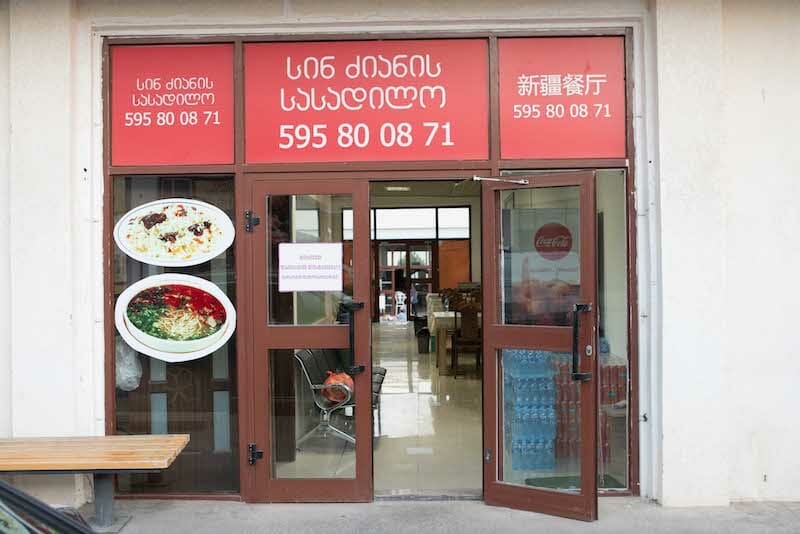 Hualing’s billionaire founder Enhua Mi, an ethnic Hui Muslim, was raised in Urumqi, the capital of Xinjiang, where his company is headquartered. So when Mi became Georgia’s single largest direct investor, a number of enterprising Uighurs also joined squads of Chinese suppliers and contractors to help build the Hualing district. Among them was Xinjiang Sasadilo’s owner, a former stone merchant named Dilbar Aisan. 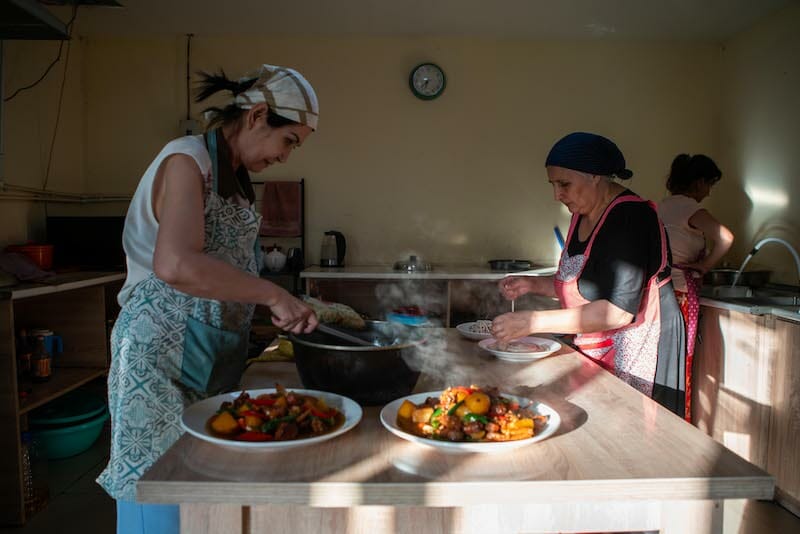 An ethnic Uighur, 54-year-old Dilbar married a Mandarin speaking Hui Muslim from Ningxia province. The two met while attending college in Urumqi. However, their marriage didn’t last and Dilbar moved to Beijing and raised their daughter single-handedly while juggling a few entrepreneurial gigs, one of which was trading Xinjiang’s famous white jade in Beijing. In 2014, a business contact tipped her off on recruitment tenders for a construction project in Georgia. Her experience in the stone trade, fluency in both Turkish (Uighur and Turkish being closely related) and Mandarin, and the Xinjiang connection had her successfully bidding to become a supplier for the stone tiles that clad the enormous Hualing plaza in Tbilisi. 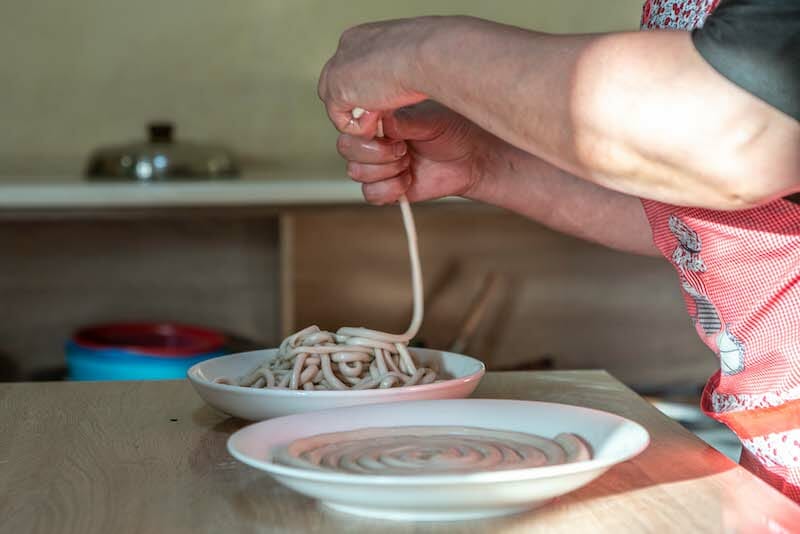 Unfortunately, the commercial failure of the mall and the slow crumbling of the lira in Turkey from where she sourced the stone tiles, affected her import business and gradually took a toll on her personal and financial health. In 2018, Dilbar decided she needed a change from the volatile world of trade and commerce. She had always been known as a good cook, and eventually, friends and acquaintances in Tbilisi convinced her to open the restaurant in the same ailing complex she helped build. Despite the ironic twist of fate, Xinjiang Sasadilo, which she runs with the help of two local Azerbaijani-Georgians, has become the check-in spot of choice for homesick Chinese and culinary Sinophiles in town. 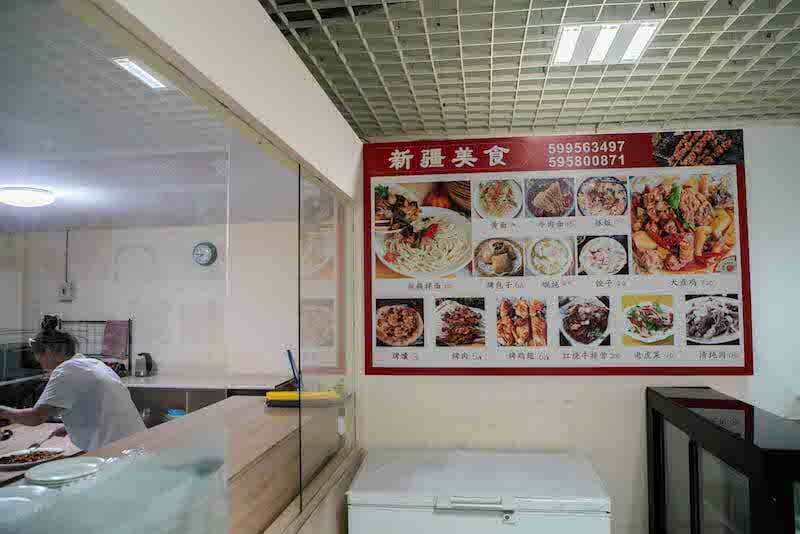 Dilbar’s story was narrated to us by her 33-year-old daughter Linxuanzie, who prefers to be called Sarah by English speakers. She splits time between Tbilisi and Istanbul – where she works for a Chinese investment company – to also help out at the restaurant and attends to calls in English. “[Dilbar] is an incredible woman but not a professional cook. It’s really home-style cooking you get here,” Sarah tells us during a recent visit to the restaurant. Sarah and her mother both enjoy living in the region; Dilbar has grown to love Georgia and has high hopes for the business. Sarah is also contemplating whether to add her mother’s restaurant to one of Tbilisi’s food delivery apps as people keep calling in ask if they deliver – which they don’t.

The place closes by 7 p.m. and availability of menu offerings is rather unpredictable. Aside from the lagman (which varies slightly every day depending on what vegetables and meat are available to serve as accompaniments), cumin-rich grilled lamb skewers or yangrou chuan, many of the house specialties are served only in large portions for 4-5 people, and can only be pre-ordered. These include braised lamb ribs, Uighur plov, and dapanji (a spicy chicken and potato stew). 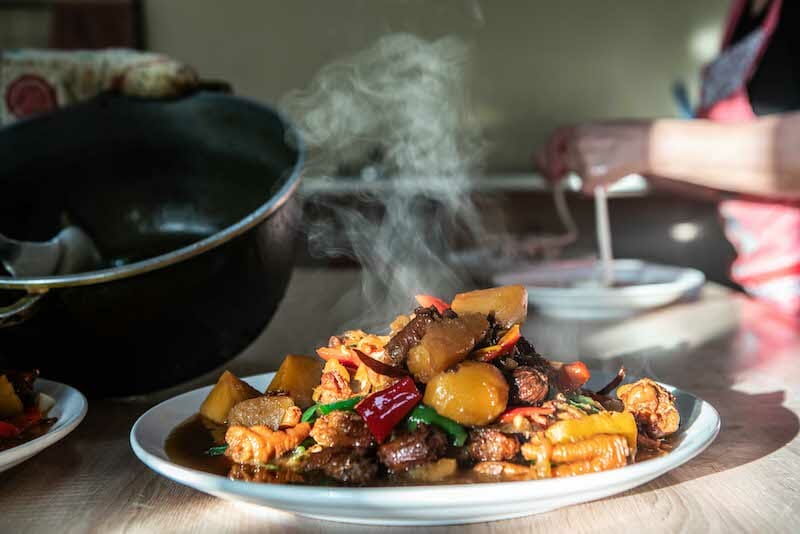 For a recent visit to Xinjiang Sasadilo, we planned ahead, preordering the dapanji to share with a group of friends. It did not disappoint. The star anise, nutmeg and Sichuan pepper infused piquant chicken stew simmered with potatoes, carrots, onions, green chilies and garlic galore hit all the right spots for us Chinese-cuisine inducted souls. But the spice quotient did have the less-initiated in our company gasping for water before returning to the plate. Coming by our table to check on us, Sarah confides with a laugh that her mother is still coming to terms with her transformation from businesswomen to chef, and has good days and bad days. As we reached out with our chopsticks for some more of the side serving of handmade flat noodles to slurp up more of the sweat inducing, taste bud tingling flavors, we agreed that we’ve yet to cross Dilbar on a bad day. 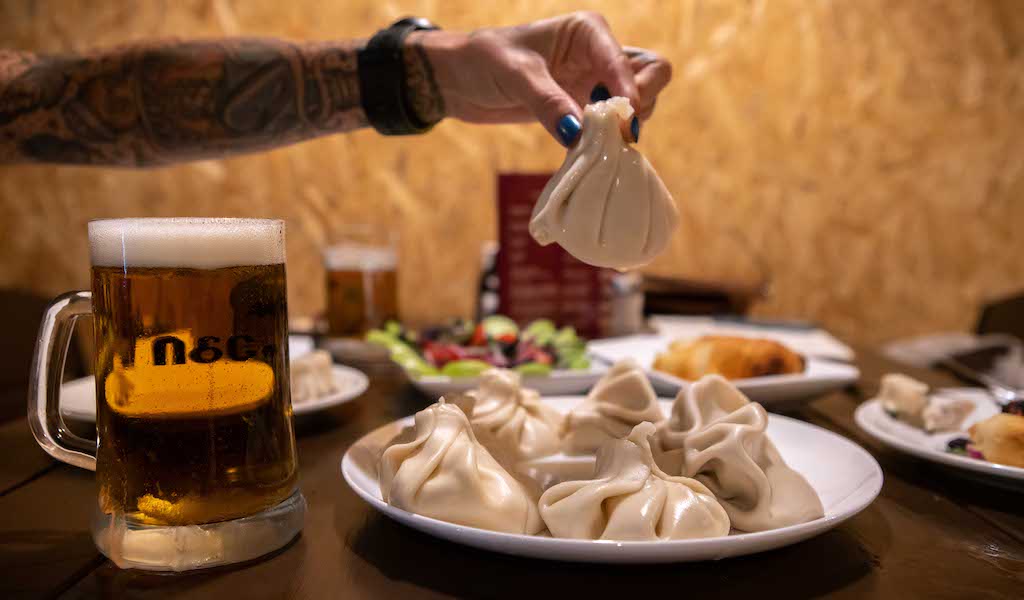 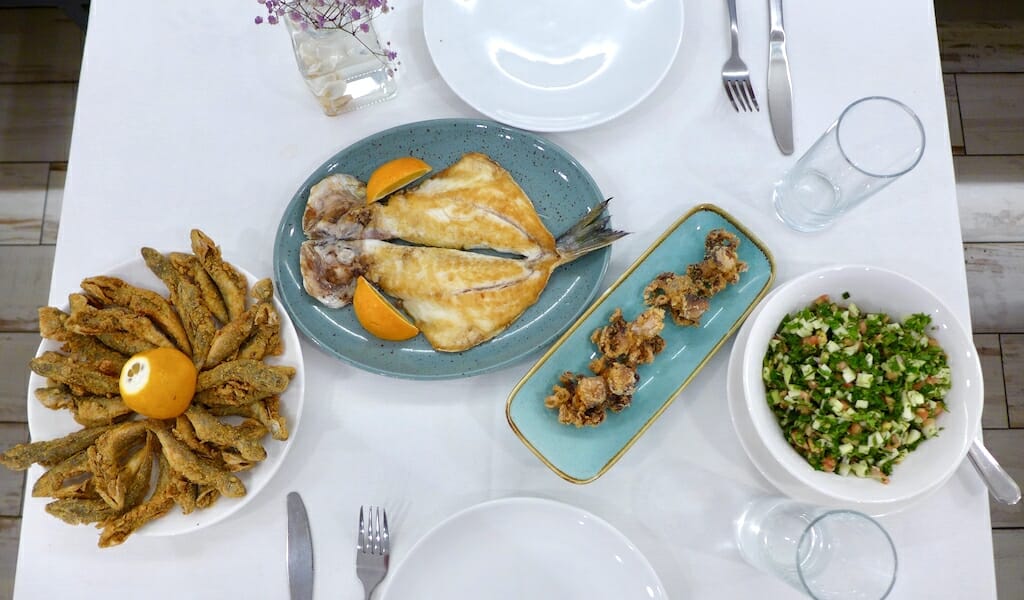