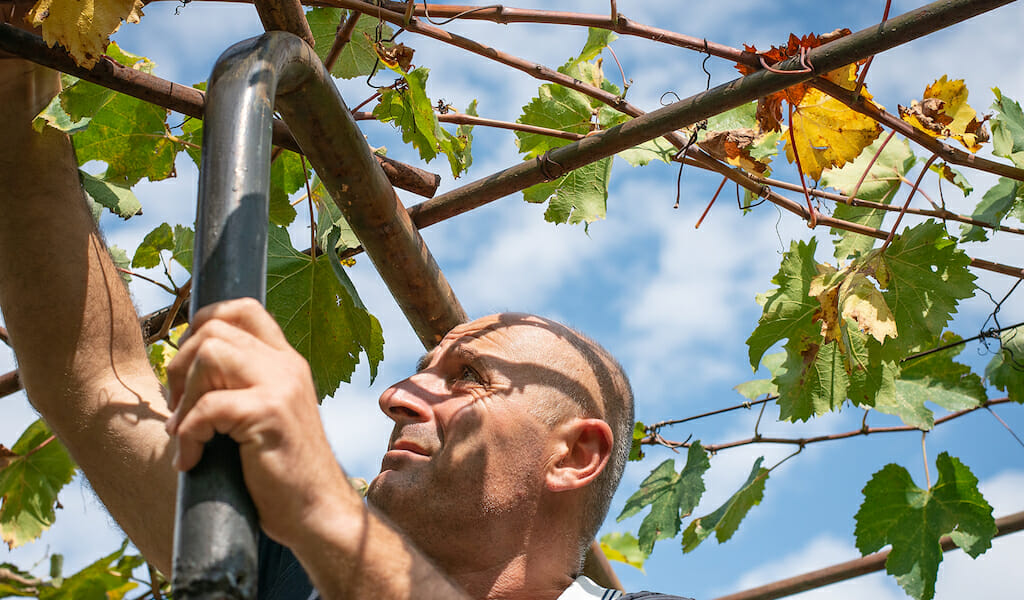 We are in Terjola, Imereti, sitting at a cozy front-yard table under a womb-like gazebo of intertwined grape vines, and our host Gia Chubinidze has brought another pair of bottles for us to try. We had already gone through a host of whites and were moving on to his reds. “This one had 14 days of skin maceration,” he declares of his 2019 otskhanuri sapere with a nose of black pepper and licorice. It is outstanding wine, like everything he has poured for us, but then Gia is no ordinary winemaker.

There is a maxim that anyone can make wine but a real winemaker cultivates their own grapes. But how many winegrowers cultivate 54 varieties in their yard? Before we swirled the first glass, Gia had introduced us to about half of the largest known private nursery of grapes in the country – a project he began in 2015 while working for the local government.

“I had a good salary, a good situation, but lost my motivation. I found freedom outside of politics,” he says gently but matter-of-factly. “My life is wine.” 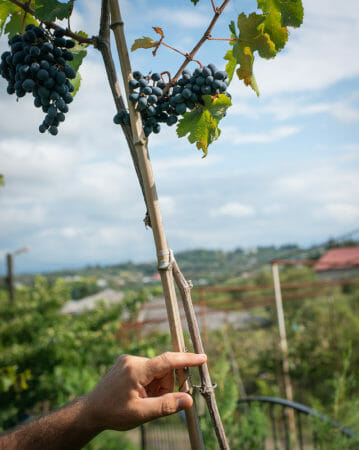 A self-taught viticulturist, Gia collects nearly forgotten vines from across the country, such as tskhenis dzudzu from Adjara, tamaris vazi from Javakheti and the rare Abkhazian avasirkhva, which he found in Crimea through a winemaking colleague who sent him two clippings. He also has ganjuri from Azerbaijan and klarjuli from Turkey. In the back corner of his yard he grows seven American vines to use as rootstock for grafting, as they are especially resistant to disease. Gia says vines that do well after four or five years in his yard may be added to the three hectares of vineyards he has outside the village.

The organic garden is lush and healthy with scatterings of lavender and fresh compost. Nitrogen-rich beans grow randomly between rows. Gia’s old marani (wine cellar, although not all are below ground) in the middle of the yard is his tasting room and a mini ethnographic museum in the making with a recycled kvevri upside down in the corner that he fashioned into a wood-burning stove. He didn’t want wine tastings to disturb the grapes in the kvevri so he built a new marani next door. It is a three-level cellar designed to macerate and store wine in kvevri without the use of electric pumps, which he believes agitates the tranquil metamorphosis from grape juice to wine. Wine is alive, he insists, and doesn’t need that kind of stress.

“Imereti has the best climate, best land, best potential [for making wine] but we don’t have lots of knowledge and experience,” says Gia, referring to the lost decades of Soviet and post-Soviet industrialization. “I’ve been making wine since I was born,” he grins, recounting how he helped his father and neighbors each year. Gia comes from a long line of winemakers, most notably his great-great-great-grandfather Ivane, known as “Nanua,” the royal winemaker to the last king of Imereti, Solomon II.

“I want to make big wine,” he says in English, which we interpret as something between serious and kick-ass. “I could make a bunch of money [making wine], but I want to be an example to others that you can make both good wine and a living here,” Gia says, popping a bottle of mamuka saperi, the only person bottling the grape, which results in a velvety, full-bodied red. 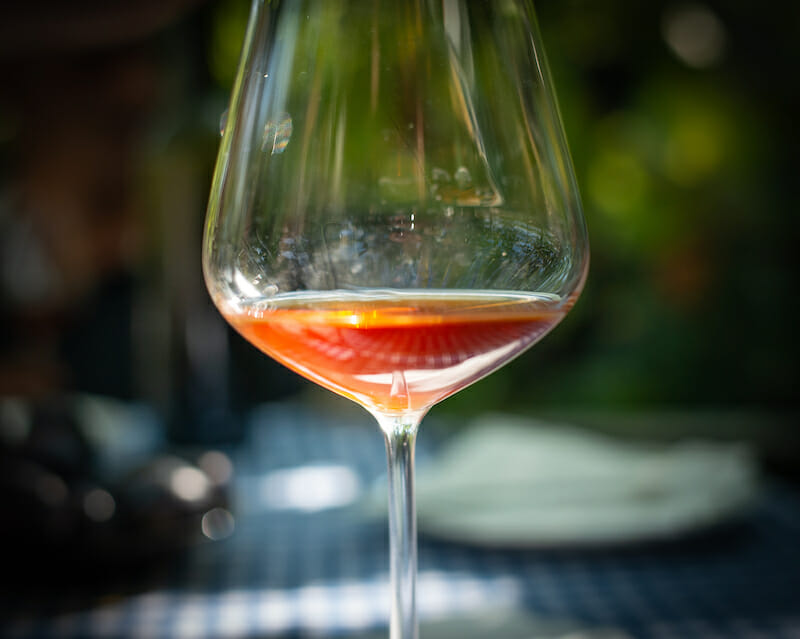 For Gia, making good wine isn’t just about conjuring it from rare grapes. He also breaks with regional traditions to push the local grapes and see what they are capable of. A 2017 krakhuna with full skin contact for seven days produced a whiskey-colored wine with cheeky tannins and notes of dried apricot and a plush finish. In 2018, he blended 30 percent tetri mamuri with 70 percent tsitska – his first harvest of the two grapes and the first known blend of them, as well. Amber in color, a deeply floral nose and with hints of mandarin, it is a fascinating wine that made it into only 47 bottles. Each year he experiments with otskhanuri sapere, a red with a local tradition of being blended with tsolikouri, a white grape. In 2015, he tried it unblended with seven days full skin contact, increasing the time each year to 24 days in 2018, before coming back down to 14 in 2019.

“Like a painter mixes colors to get the right notes, I am practicing mixing too. After ten years I’ll be a painter of wine,” he muses.

“Like a painter mixes colors to get the right notes, I am practicing mixing too.”

At this we close our notebook. It is getting late, and we have no idea what exactly we are drinking now, tippling from random bottles on the table, but the harmony of it all is profound. Gia’s wife Tea, an English teacher in the town of Terjola, has brought their 10-month-old Beka out to sit on dad’s lap and suckle on an empty wine glass while seven-year old Saba and nine-year-old Anastasia climb on the iron trellises like circus acrobats. 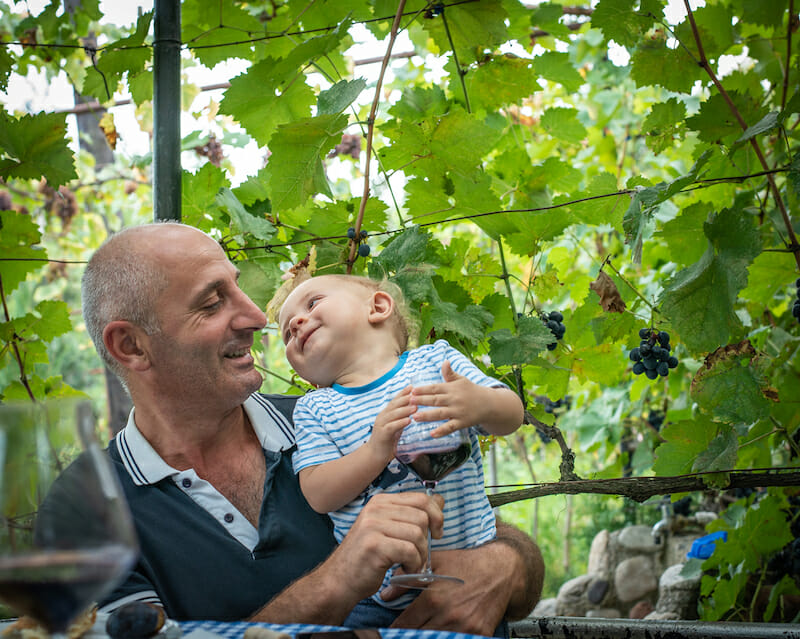 “Don’t pick the grapes from up there,” Tea tells Saba, tight-wire walking above. “There are plenty of grapes down here.” Gia smiles and pushes a wine bottle away from a reaching Beka. For the past five years he has been a stay-at-home dad, caring for the children and his vines while Tea works at the school.

“You might think I am a bit crazy but I think the cosmos helps me make wine. Maybe my ancestors, too,” Gia confesses with slight trepidation, but he need not worry. We tell him he is our kind of crazy.

“I want my good energy to go to the person who drinks my wine. It needs a pleasant smell, a pleasant taste – sure – but first it needs good energy. Many winemakers don’t work in the vineyard and don’t clean their kvevri; they don’t put any energy into their wine. Energy is labor,” he declares. And with that we understand what he means by “big wine.” 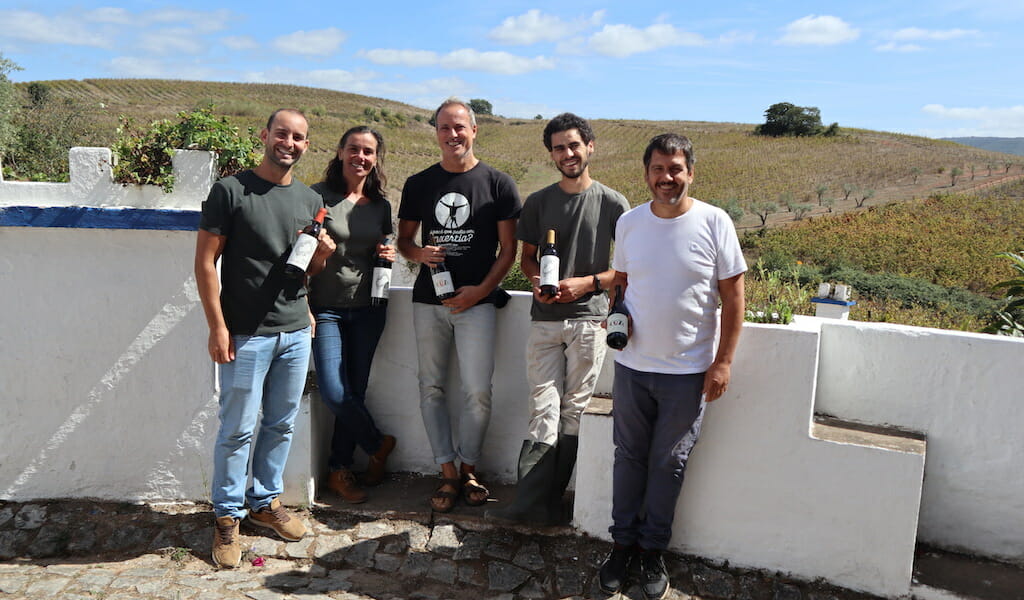 Lisbon | By Célia Pedroso
By Célia Pedroso
LisbonFruit orchards and vineyards line the driveway, and the impressive mountains of Montejunto contribute to the scenic view. More than eye candy, however, the peaks also influence the climate, making this area one hour north of Lisbon a paradise for grapes. As we reach the end of the dirt road, a friendly dog, whom we… 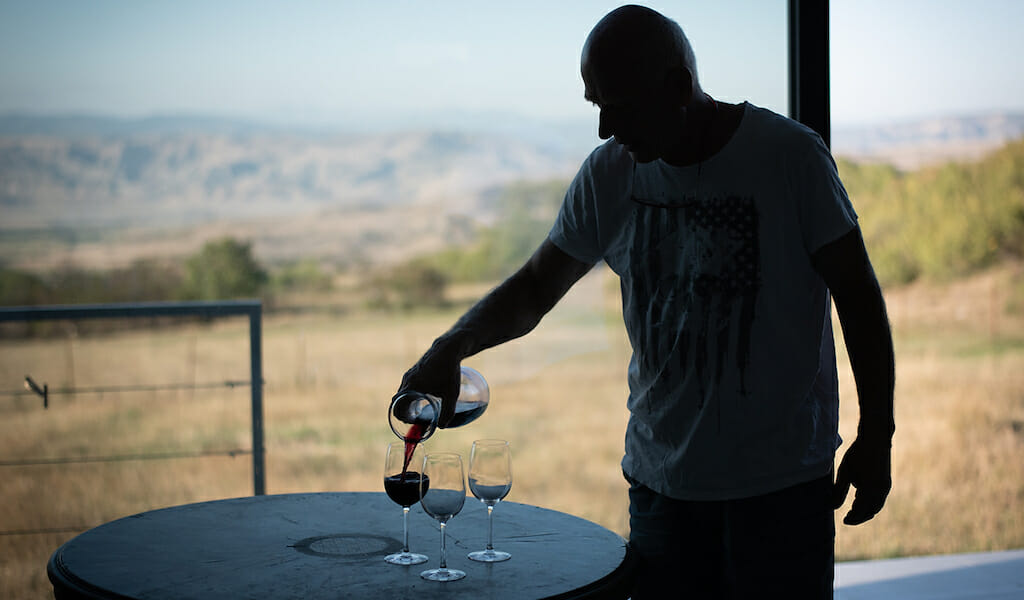 Tbilisi | By Paul Rimple
By Paul Rimple
TbilisiOur water glasses were filled to the brim with amber rkatsiteli. After the toast, Ramaz carefully lifted his glass to his nose, followed with a connoisseur’s affirmative head tilt and knocked it back, not coming up for air until the glass was dry. “Super wine!” he exclaimed, smacking his lips and exhibiting the most sophisticated…