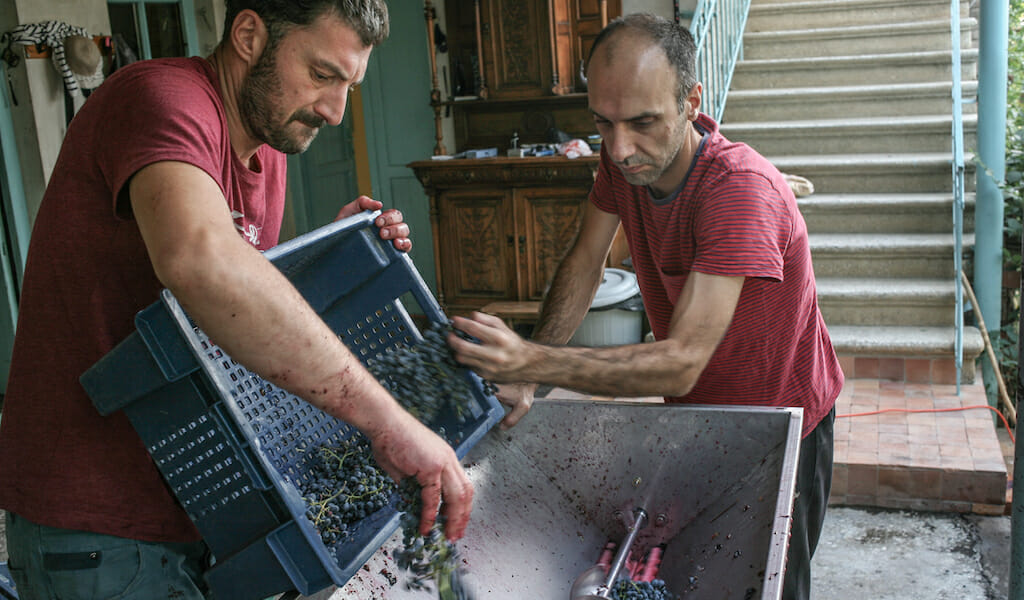 The Telavi-Gurjaani Highway is a two-lane ribbon that meanders across the fertile Alazani Valley, linking sedate east Georgian hamlets together like a string of old lights. Not a lot happens out here; SUVs and new sedans speed past lethargic jalopies and donkeys pulling carts of sticks, while men sit under the shade of the trees watching the world go by.

The vibe changes in September, though, when the slumbering villages spark to life. It’s harvest time, and the rural road is suddenly busy with cars, dump trucks and tractors pulling trailers – all either packed with grapes or on their way to the fields to pick them. This is Georgia’s largest wine region and nearly every family here has some stake in the winemaking process. 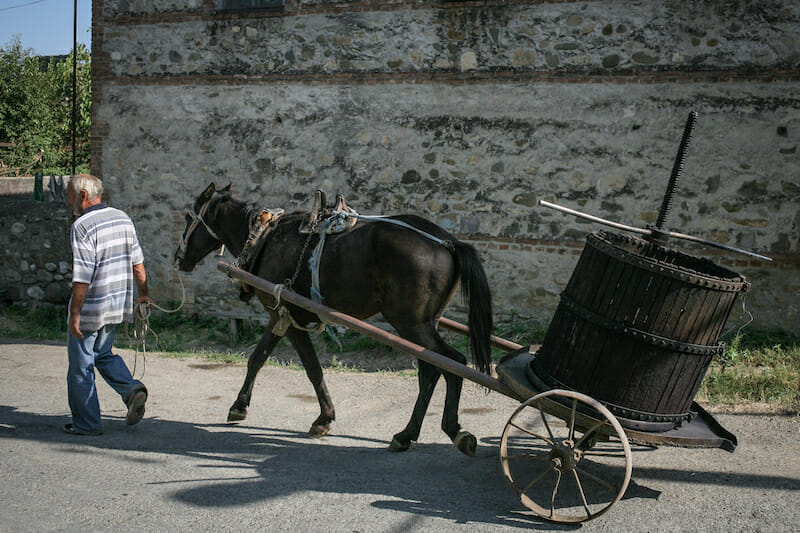 We arrive in Akura, a village between Kakheti’s largest cities, Gurjaani and Telavi, just as Irakli Bluishvili is crushing his last crates of Saperavi, which had been picked that morning with the help of two friends. The deep sultry aroma of the fresh, black Georgian grape pulp beckons us into his marani, which is more a sorcerer’s chamber than a wine cellar that has been magically turning fruit into wine for several generations.

In Kakheti, the first step in constructing a house is to bury enormous terra cotta urns called kvevri into the ground for making wine. The constant cool temperature of the earth helps keep the wine naturally stable as it matures in the kvevri. People then build their homes around the marani, typically out of stone, brick, mortar and wood.

Known to his friends as Blui (rhymes with Louie), the tall 39-year-old has eight kvevri in his family’s 100-year-old abode, which is surrounded by enormous trees: walnut, fig, kornel, hazelnut and persimmon. Jonjoli (bladderwort) shrubs provide the budding flowers that Irakli’s wife, Tekuna Gachechiladze, uses in her Tbilisi restaurants.

Irakli is part of a wave of young Tbilisians returning to the villages to become winemakers.

A photographer by profession, Irakli is part of a wave of young Tbilisians returning to the villages to become winemakers. He has always loved wine but it was his exposure to natural winemaking friends like Niko Antadze, Lekso Tsikhelishvili and Eko Glonti that inspired the inner “homovinos” in him. Last year he bottled his first wines, and they were very good.

“I’m just learning,” he confesses, lighting a cigarette with fingers stained Saperavi purple from the crushing. “But I think I want winemaking to be my new profession.” He takes to it with the utmost diligence and attention to detail. This year he aims to cork between 8,000 and 10,000 bottles.

Due to its hot, dry climate, Kakheti produces bolder, stronger wines than in the milder regions in western Georgia. The whites are made with long skin contact, resulting in heavy tannins and an amber color that has become synonymous with Georgian wine.

“Everybody makes Saperavi and Rkatsiteli with skins,” says Irakli, who is breaking from tradition by experimenting with ways to make lighter wines. This year he is making 1,500 liters of Rkatsiteli, the king of Kakhetian whites, with no skin maceration and the addition of 50 kilos of whole grapes to the kvevri. 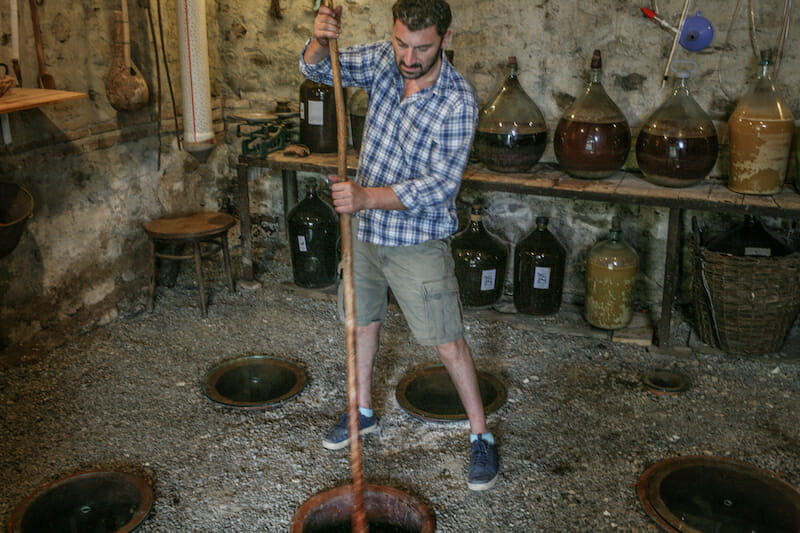 “The fermentation takes longer this way because the whole grape releases slowly, but it makes the wine more aromatic,” Irakli says, punching down a cap of Jgia grapes with a long wooden forked pole. He will do this several times a day to each kvevri.

Jgia is a rare grape that was nearly decimated when the Soviets industrialized winemaking and agriculture last century. It has been found growing randomly among Saperavi vines, yet it is a much more subtle wine than Saperavi and with fruitier aromas. Irakli’s friend Lekso Tsikhelishvili is perhaps the first person to bottle Jgia. He keeps the skins on for eight months to give it more body.

Mtsvane is a white grape often added to Rkatsiteli to give extra aromas to the heavy-bodied wine. Irakli’s grandfather blended 30 percent Mtsvane to 70 percent Rkatsiteli, which is a common ratio, but Irakli has reversed the proportions. And this year he has added a small ten-liter kvevri to make the rare Vardisperi Rkatsiteli, a (symbolic) gift for his young daughter.

All of Irakli’s wine is made “naturally,” with nothing added to help the fermentation process. This is standard practice in most family cellars. But when it comes to bottling, some natural winemakers use sulfur dioxide to stop the fermentation and protect the wine from bacteria, as well as oxidizing in the bottle. (You can add some sulfites, among other things, and still be certifiably organic.) 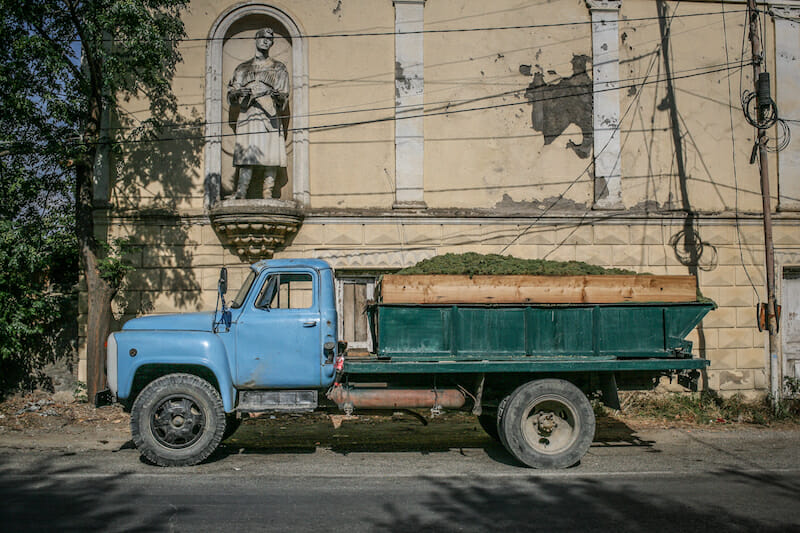 Irakli understands that making wine in kvevris is an extremely risky endeavor and that adding sulfites is a good way to reduce the odds of having your wine turn, but he is willing to take the risk because he hates the taste of sulfites.

Natural winemaking starts in the vineyard, though. Like many other small winemakers, Irakli is dependent on grapes from farmers who are not necessarily organic growers. He has half a hectare for Rkatsiteli, Mtsvane and a “little Saperavi,” but otherwise he sources his grapes from neighbors in Akura, making his wine not fully organic.

“It’s too expensive for people to grow organically,” Irakli explains. “I have a friend who harvests 15 tons of grapes from his vineyard. The money he makes from that is just enough for him and his family to make it through the winter.”

Irakli bought a plot of land for a vineyard of Khikhvi, Kisi and Vardisperi Rkatsiteli and has his eyes on acquiring other little vineyards. In the meantime, it’s work. Although the harvest is finished, there is a lot of cleaning to do and chacha to make. He estimates he’ll have about 110 liters of the Georgian version of grappa this year. We’ve tasted some and it is so smooth and delicious, it is hard to believe this is only the second year he has made it. 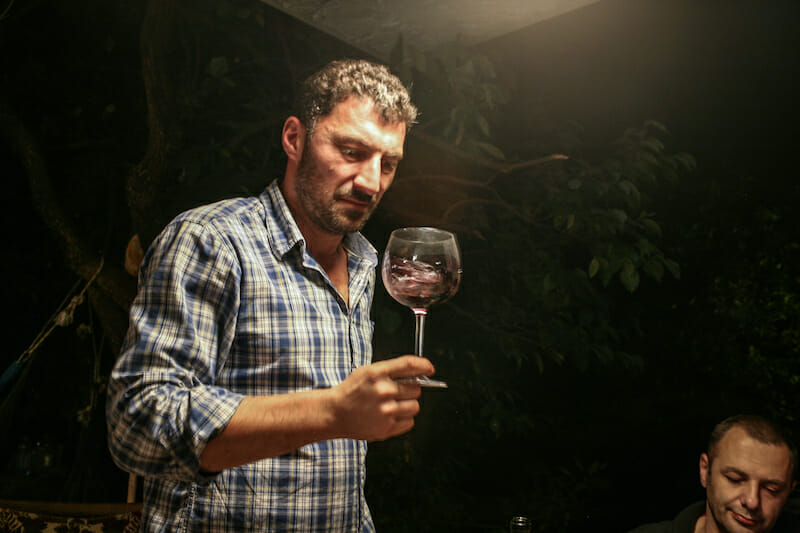 It seems as if Irakli has been moving all day. But in the evening, with Buddy Guy over the speakers, he finally unplugs himself and sits down for dinner, dropping several blue bottles of “Blui Wine” on the table. His neighbor Nugzar, whose Saperavi grapes will be gurgling in Irakli’s kvevri for about four weeks, has joined us.

This is Kakheti, so there is badrijani (fried eggplant rolls stuffed with walnut paste and garlic), fresh tomato and cucumber salad covered in basil and parsley, delicious hard guda (sheep’s cheese) and fresh tarragon, and of course mtsvadi, the skewered chunks of pork roasted over dried grapevines.

We ask if his father approves of his “experiments” and Irakli smirks with a nod, “Locals try my wine and they like it. They say, ‘It’s really good, but it’s not Kakhetian.’”

Editor’s note: Autumn has officially arrived, and with it comes a new updated batch of Fall-Winter Eatineraries, Culinary Backstreets’ very own seasonal self-guided food itineraries for travelers. The 2017-2018 Tbilisi Eatinerary highlights not only the best places to drink in the city, but also where to go for everything from the best shkmeruli (garlic chicken) to the most comforting bowl of kharcho soup. 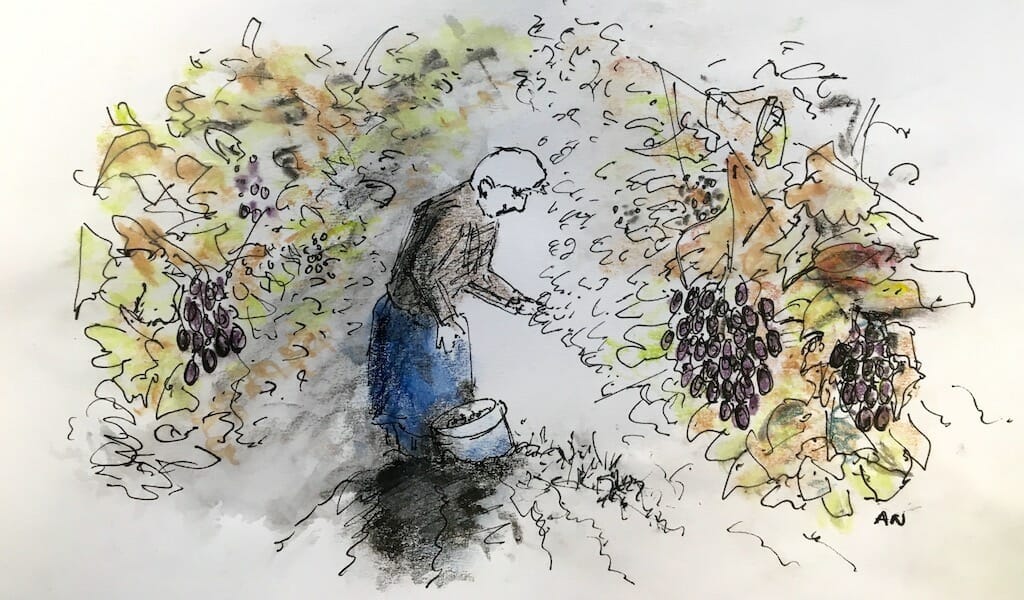 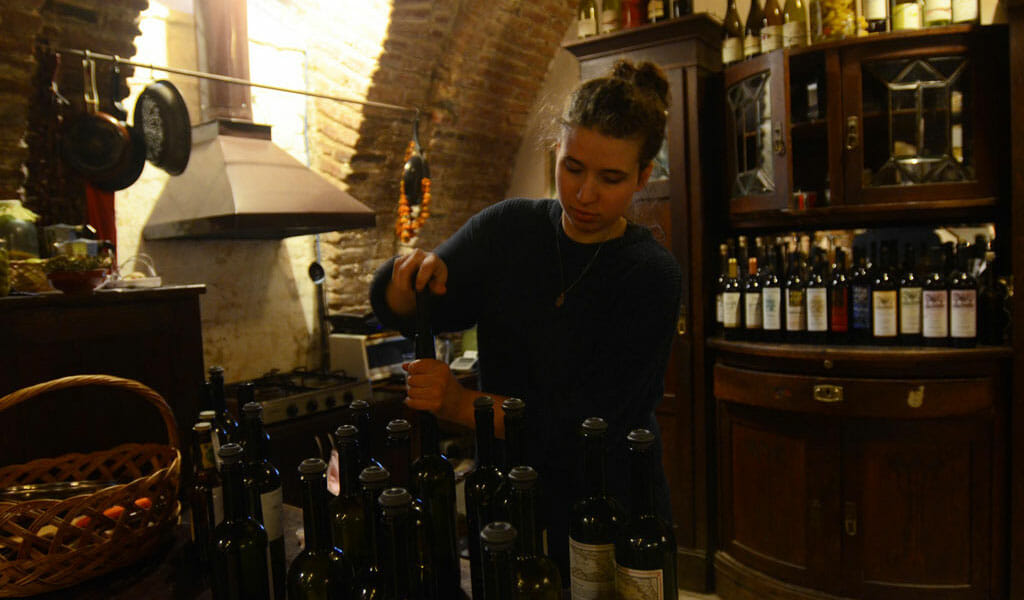 Join our Tbilisi walk to bone up on Georgian wine

Tbilisi | By Paul Rimple
By Paul Rimple
TbilisiÈnek poured a rosy-colored splash of wine into our glasses, avidly explaining how this particular Aladasturi grape vine was meticulously cultivated in its native west Georgia. In a tasting ritual uncommon in Georgia, we swirled it, sniffed it and savored the flavor as it caressed our tongues. Here in the “cradle of wine,” the land…