You sit down for a meal with family or friends, and no one can decide what to order. Well, some can, some can’t, and it goes on for ages. The waiter stiffens when you ask one more time for her to come back.

But go to the basement restaurant of Shavi Lomi in Old Tbilisi, and you have the answer for dithering relatives and pals: the gobi, or “Friends’ Bowl,” filled with a colorful selection of classic Georgian dishes.

The word shares the same root as the Georgian word for “friend” – megobari – and so, of course, a gobi bowl is for sharing. It’s a big wooden bowl, filled with a mix of different dishes and as many spoons as you need. 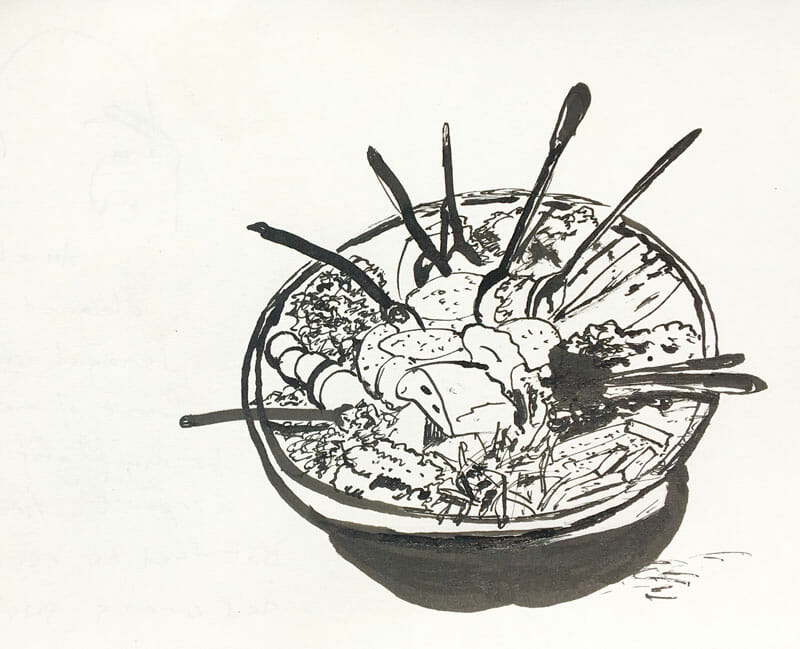 The gobi originated in Georgia’s wine country, in the big plains and valleys of Kakheti. “I’ve no idea how old the Gobi is, certainly hundreds of years,” says waiter Tazo Zautashvili. “But the bowl was traditionally made from bread, with the dishes placed on top.”

There’s no one formula for today’s gobi. But the typical Shavi Lomi version comes with red peppers with walnut sauce, jonjoli pickles, eggplant with walnut and pomegranate, beets, the cheeses nadughi and sulguni and mchadi corn bread. The bowl is supplemented with cuts of flat Georgian shoti bread to mop up the juices. Shavi Lomi also does a winter gobi, which comes with all of the above plus seasonal ham from the western region of Racha.

You can easily fill up on a gobi alone, but then it also gives you time to decide what to order next. “We do a smaller bowl for two,” says Zautashvili, “or the bigger bowls can serve up to 10 people.”

Any time we are at Shavi Lomi, a gobi is a must – and then we can make decisions. It looks like a work of art when it arrives; all eyes are drawn to the middle of the table. Wooden bowl or bread, the gobi is the perfect meal to bring people together.