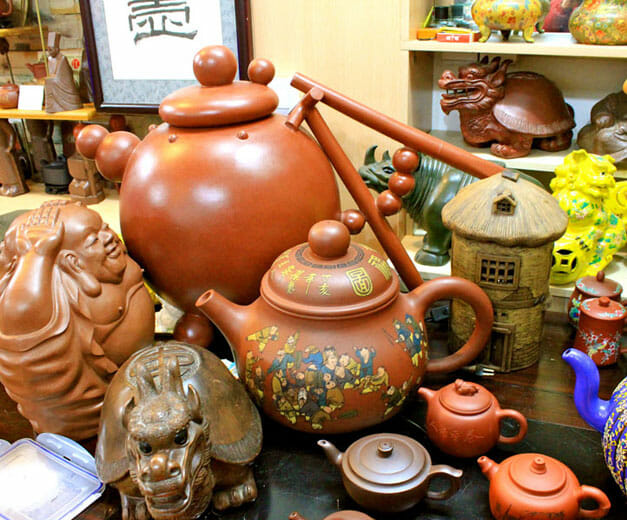 Although coffee culture is booming in China, the Middle Kingdom is still the world’s biggest consumer and producer of tea leaves. The drink is so important that one Chinese proverb claims, “It is better to be deprived of food for three days, than of tea for one,” and tea is included on the list of the seven necessities of Chinese life (along with firewood, rice, oil, salt, soy sauce and vinegar). Chinese joke that you can study tea for your entire life and still not learn the names of all the different kinds. But for tea newbies, there are four basic types of the brew to help slake your thirst for knowledge.

It’s important to note that the leaves used to make all types of tea come from the same bush, Camellia sinensis. Different ways of processing the leaves after they are harvested give each variety of the beverage its distinct flavor and health benefits.

The fairest of them all, white tea (白茶, báichá), fetches the highest price at tea shops; mostly the immature buds are only harvested over a two-day period in early spring. Demand is also sky-high for these silvery leaves because they are just so darn good for you. The exceptionally delicate processing process – usually a quick basking in the sun or a light steam – and the early picking means that these leaves retain the most polyphenols, flavonoids and catechins 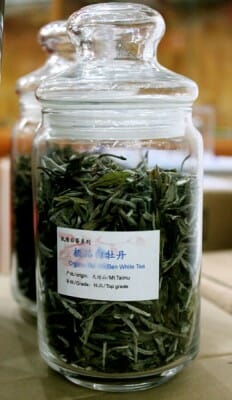 of any tea, which translates to powerful free-radical-fighting properties that reduce the risk of cancer, lower cholesterol and blood pressure, and even fight bacteria and viruses.

Green tea (绿茶, lǜchá) contains the youngest buds plucked from the top of the plant (after the white tea is picked). Green tea harvest season lasts for just a month, and the price of the tea picked goes down with each subsequent day, with leaves picked on the first day easily going for hundreds – and sometimes thousands – of dollars per jin (equivalent to 500g or 1.102 lb) at the market. Leaves are steamed to stop the oxidization process, then “fired,” which can either mean pan-fried in a wok or dried with hot air. Since green tea is one of the most popular teas around the world, it has been the subject of the most medical studies and thus its health properties are well known. In addition to offering all the antioxidant power of white tea, green tea also registers high levels of the tongue-twisting antioxidant epigallocatechin gallate (often shortened to EGCG), meaning that it can lessen your risk of blood clots and thus heart attacks and strokes. The most famous variety is Dragon Well Tea (龙井茶, lóngjǐng chá) from Hangzhou in Zhejiang province, just an hour’s bullet-train ride from Shanghai.

Oolong, or Black Dragon tea (乌龙, wūlóng), originated in Fujian province and is considered a “blue” tea because it falls somewhere in between green and red teas. Oolong teas vary dramatically based on the production process, but most of this wide variety of tea is partially oxidized (from 15 to 75%) before being heated in a tumbler of hot air until it reaches a satisfactory moisture level. Historically, oolong is the type of tea used in a kung fu tea ceremony (功夫茶, gōngfu chá); kung fu actually means that the act requires great skill, not that it is a martial art. The most famous oolongs are Iron Buddha (铁观音, tiěguānyīn) and Big Red Robe (大红袍, dà hóng páo). Oolong tea is said to increase fat metabolism and to help in the treatment of type 2 diabetes.

What foreigners call “black tea,” the Chinese call red tea (红茶, hóngchá), the most famous of which is pǔ’ěr (普洱). Originating in Yunnan province, Pu’er tea made its way to the coasts along the ancient Tea Horse Road. Packed in compressed cakes, the tea was pressed against the horse’s body, absorbing all the funky flavors to add to its notoriously musty flavors. Today the tea is 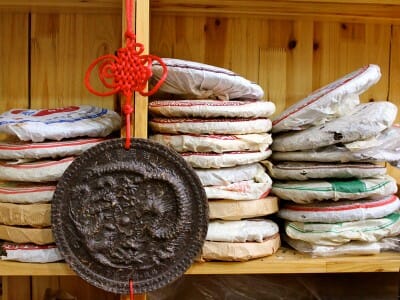 properly shipped, so you don’t have to worry about horse hair, but it still boasts the strongest flavor of all the Chinese teas. While green and white teas should be consumed a year after picking, black tea retains its taste for decades and, as with wine, older vintages cost more.

Opt for raw Pu’er (生, shēng), as the cheaper “cooked” (熟, shú) variety is chemically processed to mimic the natural aging process of the tea. Head pounding after a night of too much toasting? Try a cup of Pu’er tea in the morning and find out why Chinese consider it a hangover cure. In addition to its restorative properties, it also is a famous diet aid, comes packed with fluoride for healthy teeth and is often eaten after meat-heavy or greasy meals as it improves digestion and cuts through fat.

Tea shops hawking every Chinese tea under the sun make their homes on street corners all over Shanghai, but wholesale markets have the best deals, not to mention the widest variety of tea wares and the most knowledgeable salespeople. And if that weren’t enough, the friendly vendors are happy to sit down for a chat over a cup (or 10) of tea before you buy, so you can sample their product and prod them for information before settling on your purchase.

With four floors of tea leaves, tea wares and antiques, Tianshan Tea Market offers the best bang for your buck in Shanghai. The upstairs Traditional Chinese Medicine floor is also fun in a creepy, science-project sort of way, with its animal bones, gnarled roots and mystery powders. Across town near Yu Gardens, the vendors from Tianshan have opened a second tea market called Laoximen Tea City. All the same goods are for sale, but they’ve scrubbed away the dingy, dark halls of Tianshan in favor of a more sterile look, complete with a fountain that seems to be permanently turned off. Though the décor may be a bit quirky, the high quality of the tea sold here is a testament to why Chinese consider this beverage a necessity of life.

This article was originally published on January 11, 2013. 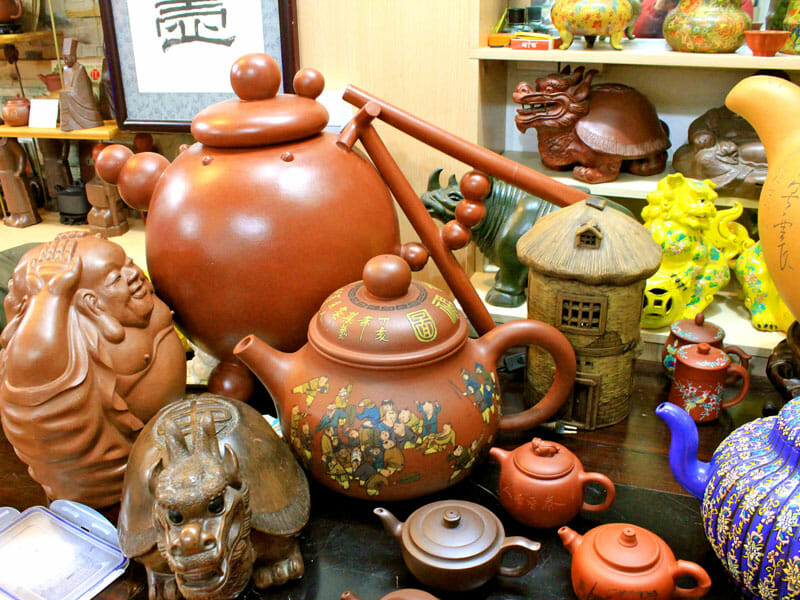 Shanghai | By Jamie Barys
By Jamie Barys
ShanghaiAlthough coffee culture is booming in China, the Middle Kingdom is still the world’s biggest consumer and producer of tea leaves. The drink is so important that one Chinese proverb claims, “It is better to be deprived of food for three days, than of tea for one,” and tea is included on the list of… 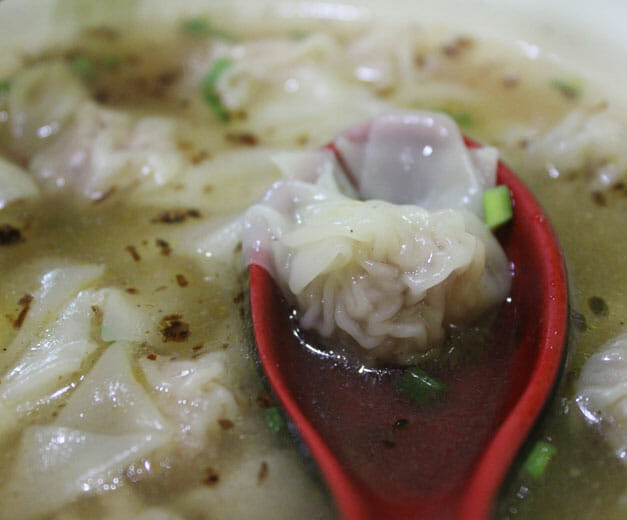 Shanghai | By Jamie Barys
By Jamie Barys
ShanghaiOne of China’s most successful franchise stories comes from Putian, a coastal city in Fujian with a population of about 3 million. The province is probably known best for the many who leave it, especially those who have been smuggled into the United States by snakeheads, and including domestic emigrants who move to hub cities,…

Shanghai | By Jamie Barys and Kyle Long
By Jamie Barys and Kyle Long
ShanghaiEditor’s note: This post is the first installment of “Best Bites of 2013,” a roundup of our top culinary experiences over the last year. Stay tuned for “Best Bites” from all of the cities Culinary Backstreets covers. Deng Ji Chuan Cai Culinary bucket lists are some of the best ways to discover our friends’ hidden…
Tea in Shanghai