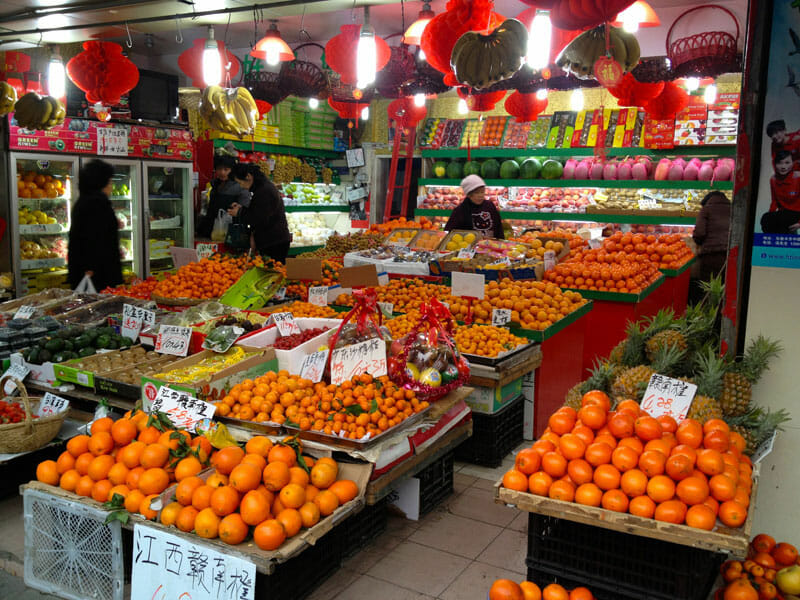 As the moon starts to wane each January, people throughout China frantically snatch up train and bus tickets, eager to start the return journey to their hometown to celebrate the Lunar New Year (春节, chūnjié) with their family. This year, revelers will make an estimated 3.64 billion passenger trips during the festive season, up 200 million from the previous year. One of the major draws for migrant workers heading home is the chance to eat traditional, home-cooked meals.

You won’t get through a conversation about Spring Festival, as the holiday is also known (“Spring Festival” is the literal translation of chūnjié), without a local waxing poetic about the holiday’s dishes, which vary region to region but have one very important thing in common: delicious symbolism. These festive meals pull double duty, using allegorical shapes and homophones to add prophetic wordplay to family dinners.

On Chinese New Year’s Eve (除夕, chú xī), which takes place this year on February 18, the final day of Year of the Horse, the first task at hand in most households will be folding dumplings (包饺子, bāo jiǎozi) by the hundred. Dumplings resemble ancient gold ingots and thus represent wealth. To bolster the metaphor, Chinese mothers tuck a coin or two into a few of them; the lucky ones who bite into the dumplings with money will be blessed with a very prosperous year. They are typically stuffed with pork and vegetables, though some non-pork-eating minorities use lamb or beef instead.

If you’re in Shanghai and don’t have a Chinese mom cooking dumplings, head to Dongbei Siji Jiaozi Wang, which reopens on March 1 to serve their steaming platters of boiled (but coinless) dumplings from China’s Northeast provinces. 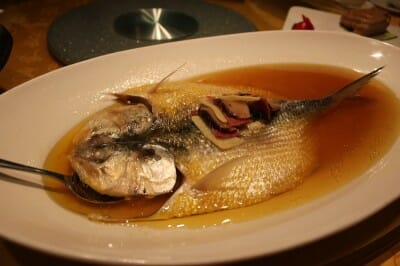 Sometimes called Reunion Dinner (团圆饭, tuányuánfànor, or 年夜饭, nián yè fàn), New Year’s Eve Dinner is a big holiday feast day, typically with eight dishes and one soup (eight is a lucky number that sounds like the Chinese word for wealth). Whole fish (鱼, yú) with the head and tail intact are used to symbolize abundance (余, yú) and to complete the phrase “There will be abundance [fish] every year” (年年有余／鱼, niánniányǒuyú). Similarly, steamed glutinous rice flour cakes (年糕, niángāo) bring eaters a year of higher prosperity (年高, niāngāo), and even vegetables get in on the homophonic action, with lettuce (生菜, shēngcài) standing in for the verb “to make money” (生财, shēngcái).

In addition to family dinners, businesses and government departments in China often throw end-of-the-year banquets at hotel restaurants and famous chains. However, the installation of President Xi Jinping has seen austerity measures put in place, resulting in a 30 percent decline in restaurant bookings for this year’s Spring Festival dinners.

That hasn’t stopped all the restaurant chains from raking in the RMB. Shanghai Min (often better known by its Chinese name, Xiao Nan Guo), which has more than 30 locations around town, sells out all of its tables two weeks before the holiday, but they are dealing with lower budgets and smaller tables. Instead of the required 10-person table, they have options for four to six diners for RMB 1,588 (US$253), and there are a lot of group deals available across the Chinese Internet.

Art Deco favorite Whampoa Club is also getting in on the new year action, with three innovative Shanghainese set menus (RMB 2,588-3,988 for six people or RMB 3,988-5,988 for 10 people). The auspicious 12-course dinners are named after lucky Chinese signs (phoenix, dragon and the mythological qilin), so you’ll be sure to eat your way to a healthy and wealthy Year of the Sheep with their magical menus.

The Peninsula Hotel’s Cantonese restaurant, Yi Long Court, also has celebratory set menus ranging from RMB 980-1,980 (+10 percent), but they’re offering two special add-ons: Lo Hei. The dish’s name translates to “tossing up good fortune” in Cantonese and includes raw fish (in this case, imported Norwegian salmon) and a variety of symbolic shredded vegetables and condiments that are tossed with chopsticks by diners at the table while wishing good fortunes to each other.

New Year’s Day, which lands on February 19 this year, is a day of visiting family and friends around the village. The custom is to give children red envelopes stuffed with money at each stop, as well as candies, fruits and nuts that the adults nibble on while they wish their neighbors a prosperous new year. Tangerines (桔, jú) are easy-to-peel homonyms for good luck (吉, jí) and are, conveniently, at the peak of their season just as the new year arrives. Pumpkin seeds (南瓜子, nánguāzǐ) are another popular holiday snack, as the Chinese name recalls a slang way of referring to the traditionally more desirable male child (男娃子, nánwázi). 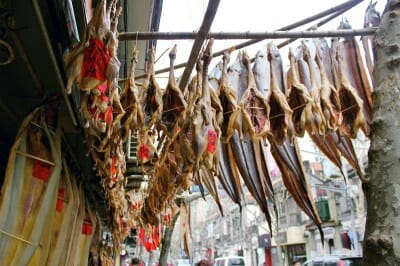 With many restaurants and markets shuttered for the holidays, families have to plan ahead to make sure they eat well throughout Spring Festival. As a result, it’s not unusual to see whole split fish or ham hocks drying on laundry lines in the days leading up to the holiday. Shanghai locals also visit places such as the pop-up dried fish and poultry market on Danshui Lu (where most of the “fish” is actually conger pike, a type of eel) and the year-round pork purveyor Jufeng Cured & Salted Pork Shop to stock up on all the preserved goodies they could possibly need. At Guang Ming Cun, hungry diners wait for hours to take home tasty soy-sauce-braised duck (酱鸭, jiàngyā) and smoked fish (熏鱼, xūnyú). Guang Ming Cun is closed on the afternoon and evening of Chinese New Year’s Eve but reopens for the rest of the holiday, to keep you and yours well-stocked until the rest of the city puts the fireworks away and stops celebrating.

This feature was first published on February 8, 2013, and has been updated for this year’s celebrations. 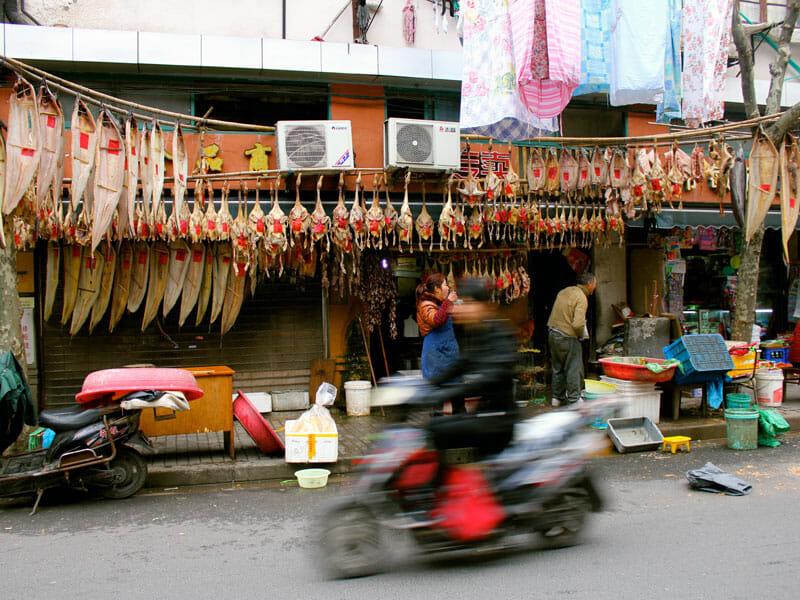 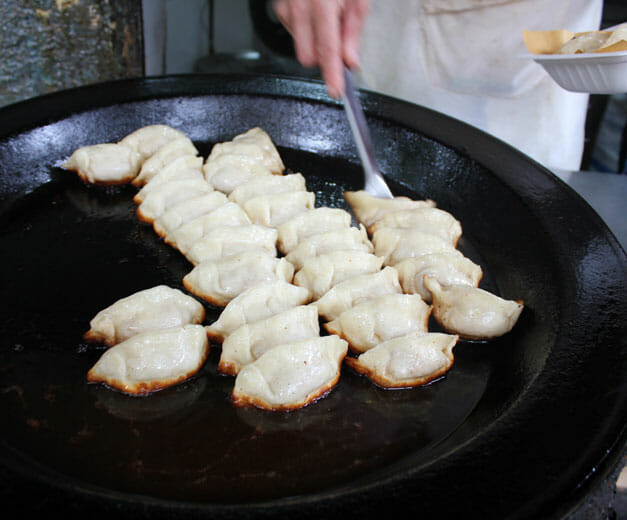