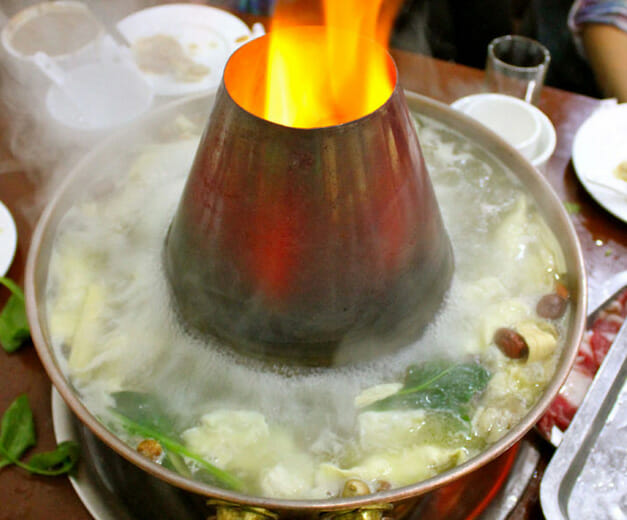 The hotpot’s storied history stretches back over a millennium in China. The cooking method originated in Mongolia, where legend has it that warriors used their helmets as makeshift pots, boiling strips of horse and lamb meat over campfires to sustain them as they made their way south to breach the Great Wall. As hotpot cooking proliferated, regional variations took their toll on the meal’s simplicity, earning it the nickname of “Chinese fondue” among some Westerners.

Lao Beijing Shuan Guo (老北京涮锅), whose name translates as “Old Beijing-Style Dip-Boil Pot,” eschews the fancy flourishes of more famous (and spicier) regional hotpot shops in China. This is hotpot as it used to be done – well, minus the sweaty helmet. Outside the venue’s scarlet doors, which hearken back to hutongs (alleyways) in the Chinese capital, skilled butchers carve frozen Mongolian lamb carcasses into strips of mutton to order. With an overworked space heater beneath their sidewalk tables, the workers wield cleavers, skillfully slicing the lamb into uniform strips. Fatty slices are served on separate aluminum platters from the more muscled meat, as the marbled mutton (肥羊肉, féi yángròu) fetches a higher price for its unctuous flavor.

Back inside the well-heated dining room, you tick off boxes selecting your broth and meat accompaniments from the menu. The broth here is a plain, dressed-down soup with a handful of green pickled vegetables, dates and goji berries (wolfberries) adding a light essence (and some traditional Chinese medicine properties) to the boiling liquid. In its simplicity, the broth allows the meat to do all the heavy lifting when it comes to flavor. And it arrives in style. Once you’ve made your selections, the waitstaff brings up your pot (or “steamboat”), which looks not unlike the love child of a vase and sombrero. The bubbling water is fired by glowing coals inside the pot, and a flue stacked on top of the pot directs any flaming embers toward the ceiling – but don’t be surprised if a few land on you anyway. 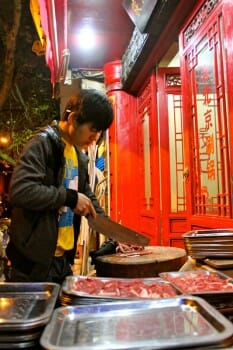 There is a variety of side dishes that are designed to be dunked in the bowling water along with the slices of fatty lamb. Egg dumplings (蛋饺, dànjiǎo) stuffed with pork and vegetables are a specialty here, and don’t miss the “frozen tofu” (冻豆腐,dòngdòufu), chunks of layered tofu skin that soak up all the gamey flavor of the lamb, making for a delicious, water-logged bite. You might also order slices of lotus root (藕片, ǒupiàn) to add some crunch to the soup. For more adventurous diners, there’s even surprisingly creamy pig brain (猪脑, zhūnǎo) available.

The DIY menu is entirely in Chinese, but most diners will take pity on you if you’re character-illiterate. Just peek around at the other tables and gesture back and forth from the dish to the menu when you see something you like. The several bottles of beer at every table usually accelerate the friend-making process. Make sure you point to the dipping sauce, a velvety mix of peanut and sesame sauce topped with a fistful of cilantro. Mix well. Dip boiled lamb. Enjoy.

This review was originally published on December 13, 2012.
By
Jamie Barys
, photos by
Kyle Long 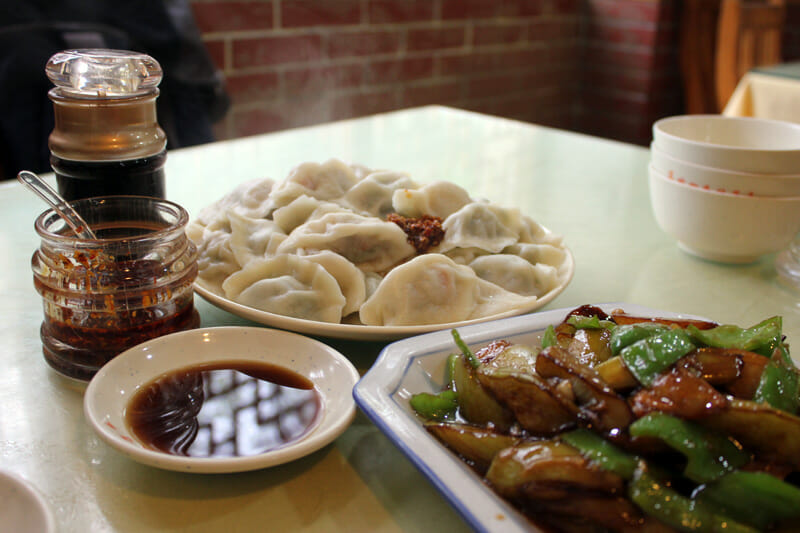 Shanghai | By Jamie Barys
By Jamie Barys
ShanghaiWith a menu from the frigid provinces that border Korea, Dongbei Siji Jiaozi Wang – literally, “The Four Season Dumpling King from the Northeast” – is all about hearty dishes to warm you up from the inside out. The further north you head from the Yangtze River, the more the temperate climate demands that wheat… 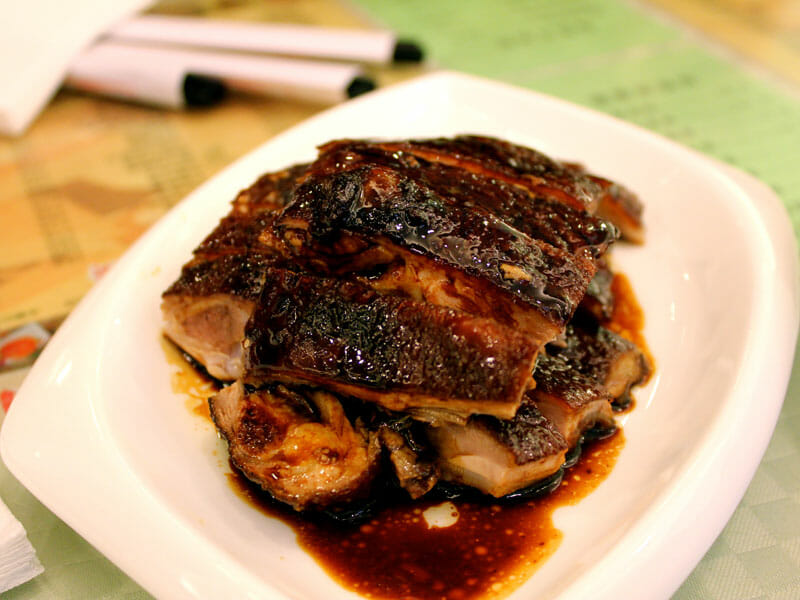