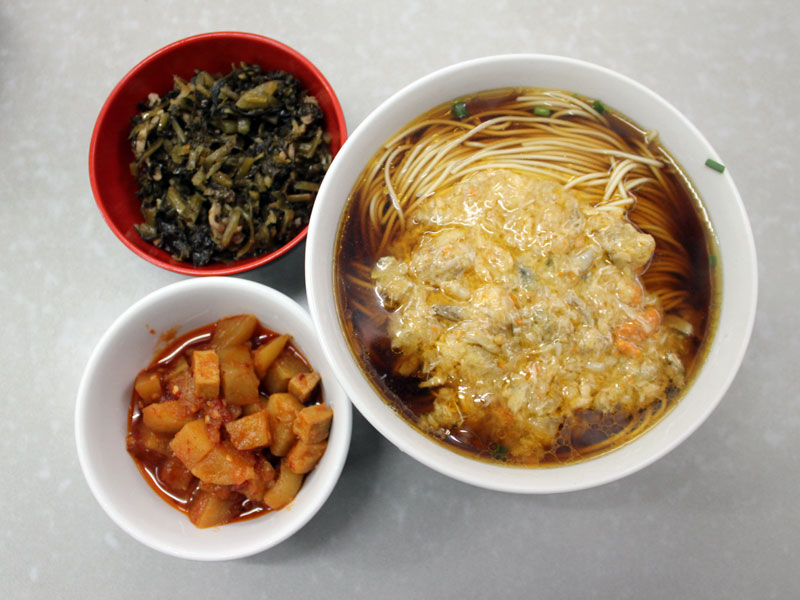 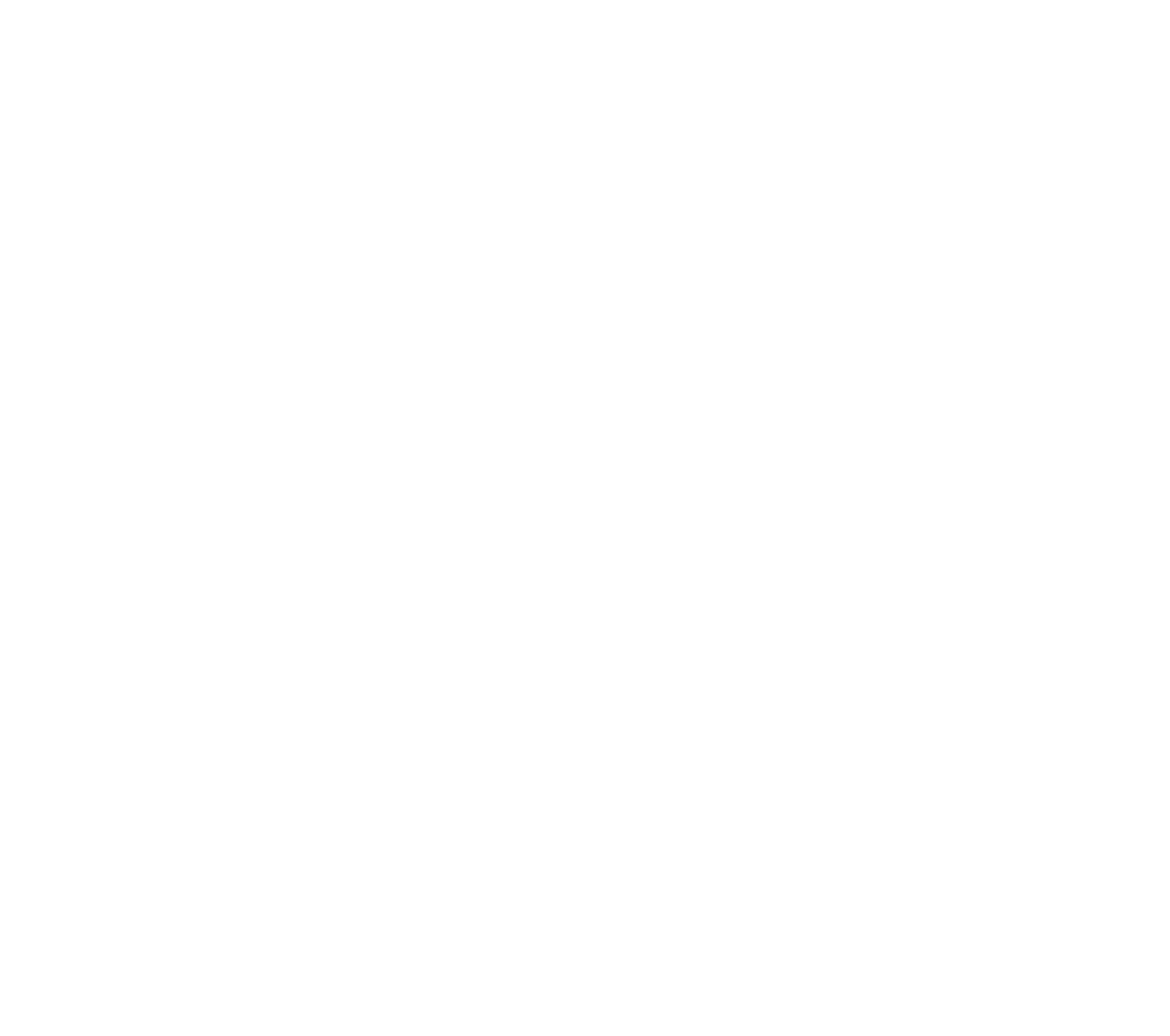 In 2008, Shanghai’s noodle scene was dealt a mighty blow. A Niang, a granny from the ancient seaport of Ningbo who was famous among local foodies for her seafood noodles, was forced to close her streetside shop after being diagnosed with kidney disease. Over the past few decades, she’d gained a loyal following; her friendly, wrinkled face was a common sight in the dining room, as she often wandered through the hordes of hungry diners to say hello to regulars or wipe up a splash of spilled soup.

Chinese television shows and magazine articles lauded the elderly cook for her single-minded dedication to quality ingredients: she would wake at 3 a.m. to start the rich fish stock for her famous yellow croaker noodles (黄鱼面, huángyúmiàn), then head to the market at 5:00 to secure her pick of the fresh amber-bellied fish. By 6:30, bowls of noodles would arrive steaming on the handful of folding tables that made up the entirety of her cramped dining room. At 9:30, A Niang would close her doors to regroup for the mad lunch rush that started at 11:00 and ended when the bowls ran out (or at 1:30 p.m., whichever came first). If you wanted the noodles for dinner, you were out of luck.

When she was well into her eighties, A Niang passed away just months after closing shop, and noodle lovers around the city mourned the loss of a culinary treasure. But a year later, rumors of a reappearance began cropping up. A Niang had left her recipes to her grandson, whom she’d helped send to graduate school in England with the money she earned from selling her noodles. The young man had returned to Shanghai and secured a new, larger space just a block away from the original, along with adding dinner service. Before long, diners were lining 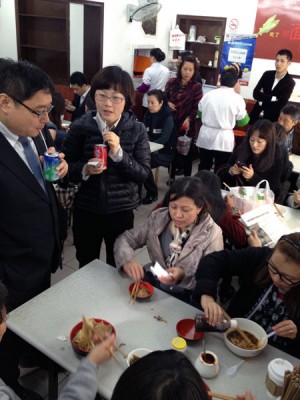 up down the block, eager to see if the noodle heir could reproduce his grandmother’s famous dishes. Turns out, she trained him well, and several years later there’s still a line that snakes out the door during peak meal times to prove it.

The star attraction at the shop are the yellow croaker noodles, in which the flaky white meat from the fish swims in a savory, russet-colored broth spiked with soy sauce. The spine of the fish is removed and thrown into the stock, but the remaining tiny bones that hold together the hunks of succulent fish are edible – although you’ll fit right in if you spit them onto the table beside your bowl. The crab meat noodles (蟹粉面, xièfěn miàn) are another winner, with a messy layer of golden hairy crab roe and sweet meat glistening atop the noodle soup. The meaty eel noodles (爆鳝面, bàoshàn miàn) are worth the inevitable wait, too: lengths of braised-till-it’s-black eel bob in the yellow croaker broth, looking more like oversized anchovies, but ending on a decidedly sweet note. To round out your meal, try a sampling of the side dishes. Preserved mustard greens tossed with slivers of pork (咸菜肉丝, xiáncàiròusī) mingle well with the fishy flavors of the noodles, while the boiled potatoes and tofu (辣酱, làjiàng) tossed with chili flakes are a delicious way to spice things up.

If you come during peak dining times, expect a serious wait. A Niang’s grandson did away with breakfast service at the beginning of 2013, so the restaurant now starts slinging bowls of noodles at 11 a.m. The line forms at 10:45 and snakes out the plastic curtain doors quickly – hour-long lines are not unheard of here. If you’re dining with a group, have one person order while the others fight for seats. (A word to the wise: hovering over diners who are down to their last slurp is the only way you’ll ever get a seat here.) The surly waitresses shout out numbers in Mandarin while barreling through the hungry 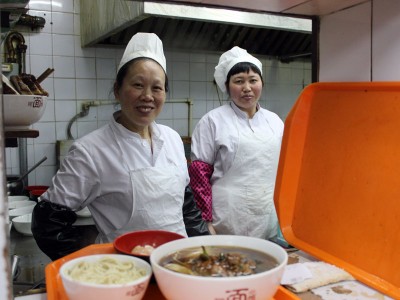 masses with trays slippery with soup, sloshing the bowls down on the table. A sign above the dishwashing window says, “Your mouth will be so happy when you eat A Niang’s noodles that it will keep chewing until it cramps.”

Although the atmosphere might sound downright aggressive, diners tend to be peaceful – that is, once they’ve downed their first bite of the springy noodles and their blood sugar has recalibrated. Old-timers happily pass on stories of eating here lifetimes ago or offer ordering recommendations to newbies, and diners gossip about the celebrities who stop in whenever they make it to Shanghai. Just ignore the jealous stares of the impatient crowd looming overhead. Their numbers will be called eventually. For now, it’s your time. 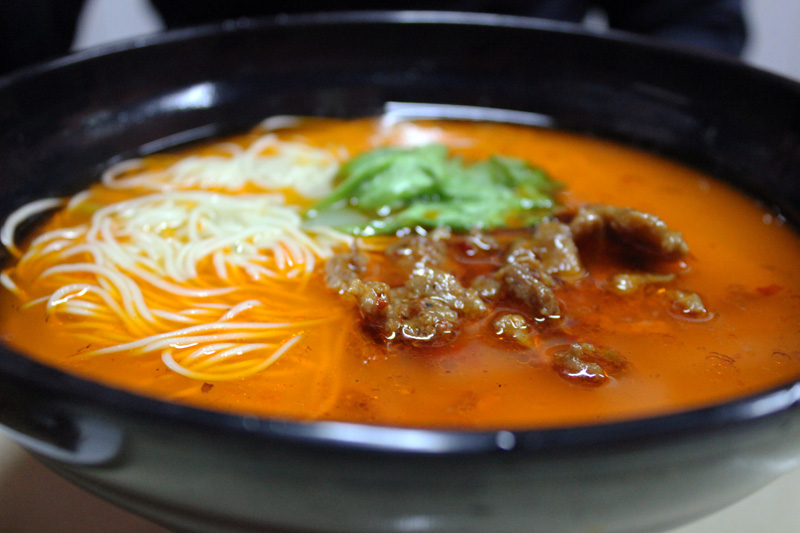 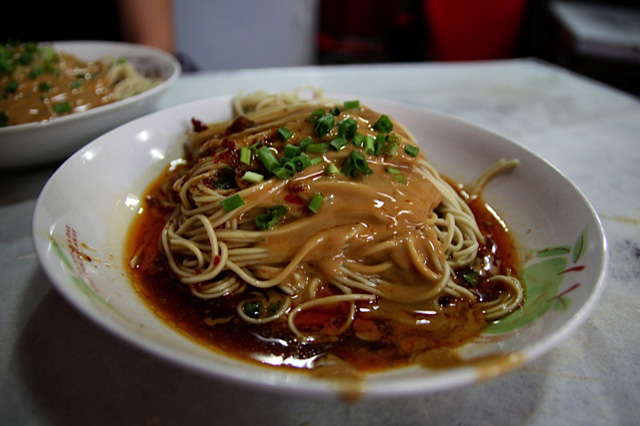 Shanghai | By Kyle Long
By Kyle Long
ShanghaiSometimes a word in Chinese so perfectly captures a mood or feeling that the English approximation seems woefully inadequate. To take one example, the Chinese combine “hot” (热) and “noise” (闹) to describe the loud and lively nature of local hotspots, but in English, the best we can do is “bustling.” To experience what China’s…
A Niang Mian
36 Sinan Lu, near Nanchang Lu, 思南路36号近南昌路
No phone
Hours: 11am-8pm
Menu: Chinese only