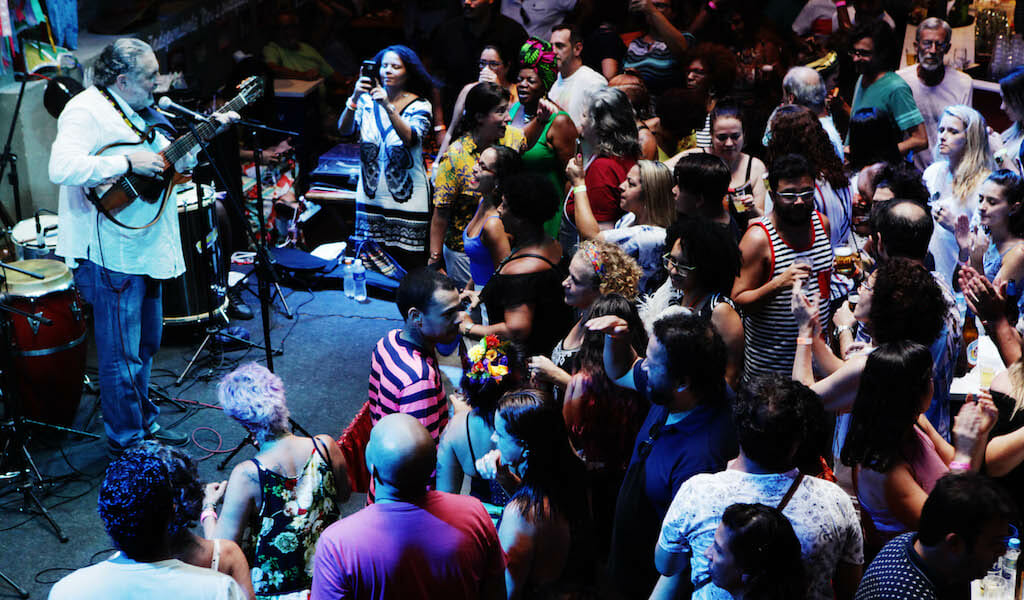 When it first began five years ago, Põe na Quentinha was an informal get-together for people who were equally passionate about food, beer and samba; they spent the day eating, drinking and dancing in preparation for Carnival.

Fast-forward to 2017, when what had now developed into a proper street parade drew in over 5,000 people over three different days during the Carnival Season. This year, the food-focused event, the only one of its kind in Rio, is even larger, hosting a full month-long schedule of parades that started in mid-January. 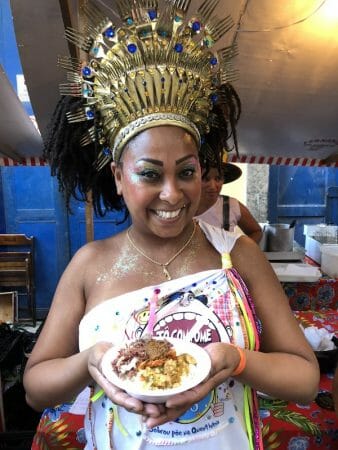 The festival’s popularity stems from the fact that, in the lead-up to Carnival, most street samba presentations are focused on the music and the party, to the exclusion of food (an exception to this is the tradition of serving feijoadas at samba schools). Fed up with the lousy fare and warm cheap beer at these events, food photographer Berg Silva, Felipe Trotta, who owns the Cine Botequim, and a group of chefs and musicians came together in 2013 to create Põe na Quentinha, a street samba presentation with a twist: equal importance is given to food and drink, which can be purchased from stalls ringing the makeshift dance floor. “I take pictures of all the best food in the city, but what I really love to photograph is samba and food together. So, this parade is a culmination of all my passions,” says Berg.

The event, which has the feel of both street fair and samba parade, takes its name from the Portuguese expression “põe na quentinha,” which means “put it in a takeout box.” It’s a phrase people usually say to waiters at bars or restaurants when they want to take home leftovers. As a result, this expression evokes restaurant and bar culture, which is at the heart of this Carnival street parade.

“We love being the parade that attracts people who are just as obsessed with food as we are.”

Most of the food and drink stalls at Põe na Quentinha are manned by chefs and bar owners. Some of them are very well-known in Rio’s foodie circles, like Katia Araújo, who owns the beloved restaurant Aconchego Carioca, Fréderic Monnier, the French chef at Brasserie Rosário, and Fernando Blower, the restaurateur and president of SindRio, the association for local bar and restaurant owners.

The food options vary from genuine African recipes to huge meat sandwiches and the very Brazilian coxinhas (croquettes) made with creative fillings. Meza Bar, one of the most famous bars in Rio, sells caipirinhas and other cocktails, and a group of cooks that go by the name Mar de Sabores whips up seafood dishes using the recipes of locals from Maré favela.

Even the music is food-inspired. Samba na Cozinha (“Samba in the Kitchen”), a group of samba musicians with an affinity for Brazilian cuisine, performs songs with names like “Assassinaram o camarão” (“Somebody killed the shrimp”) and “Feijoada Completa” (“All in the black bean broth”). All of the Põe na Quentinha presentations are free, and part of the money earned from selling food and drink goes to social projects designed to fight poverty and teach gastronomy to people living in the slums. 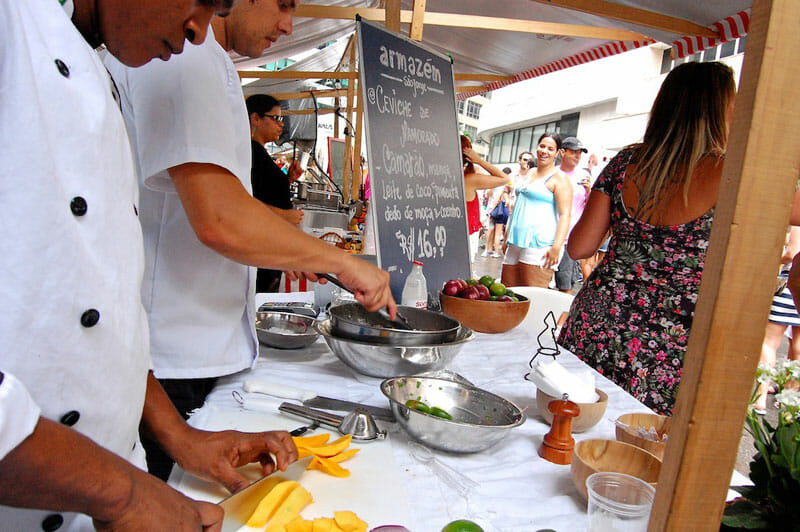 Word has spread about this party celebrating both samba and food, which has seen the event grow in size and span the city: in 2018, they are not only hosting parties in their usual downtown spot, but also in shopping malls, bars and other places where Carnival street parties take place in Rio.

A jam-packed schedule is the price of success, but nobody is complaining. “We love being the parade that attracts people who are just as obsessed with food as we are,” says Berg. “We want to ‘Carnivalize’ gastronomy, turning it into a spectacle, and I think we’re getting there. The increasing number of people who come to sing, dance and eat with us each year suggests that we’re on the right track.”

Friday, February 9, from 9 p.m. to 1 a.m. at the gardens of the historical Casa França-Brasil, Rua Visconde de Itaboraí, 78, Centro