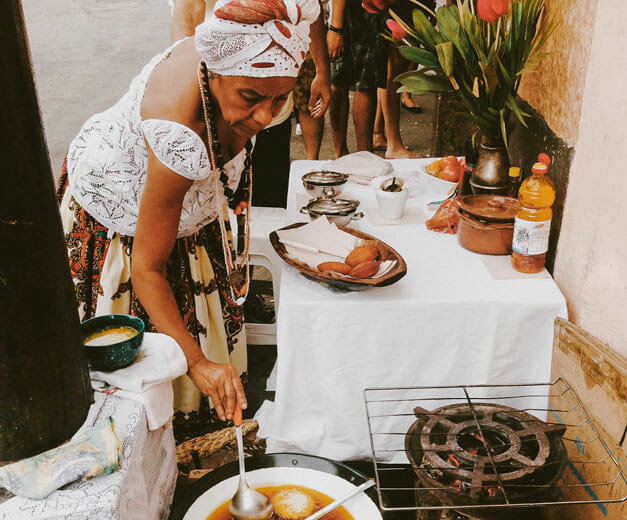 Editor’s note: In the latest installment of our recurring feature, First Stop, Tracy Chang tells us what and where she ate when she was in Rio this summer during the World Cup. Chang headed up marketing and communications for Martín Berasategui at his three-star Michelin restaurant in San Sebastián, Spain, and, upon returning to Boston, she co-founded the pop-up Guchi’s Midnight Ramen and served as a teaching fellow with the Harvard Science and Cooking program. She is currently working on opening her own restaurant. Follow her adventures on Twitter and Instagram.

My friend and food soul mate John has been visiting Cidade Maravilhosa every year for the past 15 years for work. I couldn’t pass up the invitation to join him this summer for the World Cup, and to sample the exotic Brazilian fare, from the tropical fruits that fell every day from the trees in our Santa Teresa yard to the Bahian bites from street vendors.

Most cabbies don’t know the winding, cobblestone streets of Santa Teresa, but they do know the timeless boteco Bar do Gomez, our den for most Copa matches. The iconic bar was opened in the early 1900s by a Gallego transplant, originally as a grocery store, hence its name, Armazém São Thiago. The décor of antique knickknacks – fans, typewriters, even an armoire and escritoire! – color the room and reach all the way up the high ceiling, as do the vintage cabinets, housing the library of aged cachaça. I noticed the 19th-century wooden icebox behind the bar was still good as new as Leo poured me a frosty chopp (draft beer).

The bar is a Rio institution for natives and visitors alike, with an eclectic cross section of the community, from Afro-adorned, artistic millennials to toothless, stoop-dwelling, ancient locals. Gomez boasts a deep cachaça list, and an equally substantial offering of petiscos (small plates), specifically in the form of fried balls that come in all shapes and sizes. More than once I found myself in curious company – an MIT mathematician, an interior designer from Zimbabwe, a biochemist from Scotland, to name a few characters. During my two weeks living up the street, I managed to make my way through the entire fried ball menu, sharing food and stories with friends old and new. My favorites include the bolinho de fubá com rabada e agrião (a round, fried cornmeal batter ball with oxtail and watercress), and the coxinha de camarão (a large, round fried shrimp ball; often the batter is made like a velouté or béchamel). 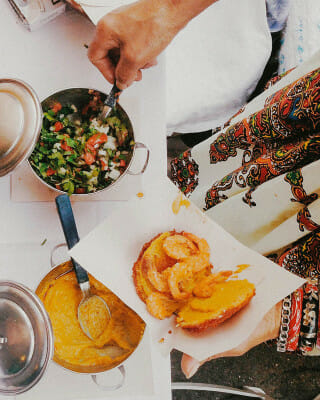 On the weekend there is a traditionally clad Baiana with her acarajé setup at the doorway of Gomez. She serves the fresh, hot Bahian street snack – a black-eyed pea batter, fried to order in dendê (palm oil), halved and filled with fried shrimp, vatapá (a creamy sauce made from manioc flour, coconut milk, peanuts and palm oil), caruru (a sauce made from cashew, okra, onion and dried shrimp), a diced tomato salsa and spicy chili sauce. It’s a balanced three mouthfuls of hot and cold, crispy and succulent, savory and spicy. Admiring her meticulous craft, I’d pull up a neon stool and practice my Spanish-Portuguese, inquiring about the ingredients and process as she cooked. Lucky for me, not only did she have real napkins capable of absorption, but also her Italian amica came by with a homemade treat, comparable to a thin, flourless chocolate brownie. Dessert first while I waited… porque não?

One evening we were with a group of like-palated, seafood-loving friends, so we headed down the road to Sobrenatural. What an excellent place for large parties to share platters of homey Bahian dishes like polvo ao alho é oleo (grilled octopus with garlic), coco de surubim (grilled surubim fish with coconut milk, Brazil nut, banana, potato and broccoli rice), and moqueca de bacalhau (cod stew with coconut milk, tomatoes, onion, garlic and palm oil). Contrary to its rubbery reputation, the octopus exceeded expectations, as it was perfectly tender with just enough chew, and thoroughly blanketed in garlic bits. Naturally, we drank the national cocktail of Brazil, the caipirinha, (a muddling of lime, sugar and cachaça, the country’s prized alcohol distilled from fermented sugarcane). Several caipis. Each. Brazilian limes are the juiciest I’ve ever encountered, so knowing my holiday was finite, I made a conscious effort to enjoy them often.

After we couldn’t eat another bite, we headed a few doors down to Bar do Mineiro for digestifs. We only had libations, but I’m told their feijoada is excelente, and available daily for lunch or dinner. Most of us preferred the drink of choice, aged cachaça, yet one member of our party felt especially fearless that evening and opted for something more elusive and Hulk-green, formally known as absinthe. A few digestifs later, we found ourselves debating whether one of the several puppets on the wall is Angelina Jolie or Michael Jackson.

Down the hill in Leblon, we frequented Academía da Cachaça, because after the first trip, all the rest thereafter were inevitable. Every adventure to the Academía began with a geladinha de maracuja (a refreshing blend of passion fruit and cachaça). If we were hungry, we’d have a few petiscos like bolinha de queijo (fried cheese ball) with a caipirinha. We went for dinner one night and had the humble feijoada, which most restaurants offer only on weekends, but the Academía offers it every day. This is Brazil’s national dish, a black bean, clay-pot stew with pork parts, including ribs, blood sausage and trotters, served with farofa (toasted manioc flour), potatoes, collard greens, crispy pork belly bits, white rice and fresh orange wedges. I recommend adding pimenta (a chili pepper sauce often made from Malagueta peppers and white vinegar). The pimenta to me was like spinach to Popeye, instrumental during the fortnight I spent battling food comas and the afflictions of gluttony.

For my last supper, an intimate group of us headed to the Bahian gem, Siri Mole (Copacabana). Ten days prior, I had my first casquinha de siri (crab with palm oil, coconut milk, bell pepper, parmesan cheese and bread crumbs, all stuffed in a scallop shell), and I was hooked. Every place I went, I scanned the cardápio for siri, wanting to taste the best in town. I can’t imagine having left Rio without experiencing the assemble-it-yourself acarajé, moqueca de siri mole (stew of soft crab with tomato, coconut milk, palm oil and onion) and the best casquinha de siri – unforgettably juicy and satisfying. 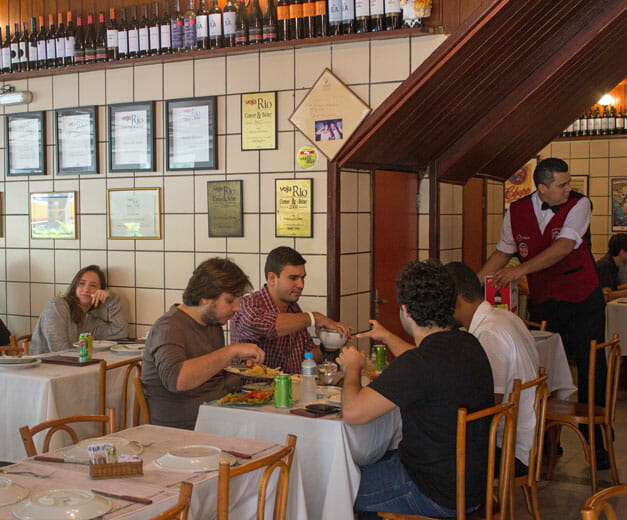 Rio | By Winnie Yang
By Winnie Yang
RioEditor’s note: We asked jazz guitarist and composer Anthony Wilson where he heads first for food when he lands in Rio. Wilson has been a member of Diana Krall’s quartet since 2001 and has recorded with Paul McCartney, Willie Nelson, Madeleine Peyroux and Barbra Streisand, among many others. His 2011 album “Campo Belo” was recorded… 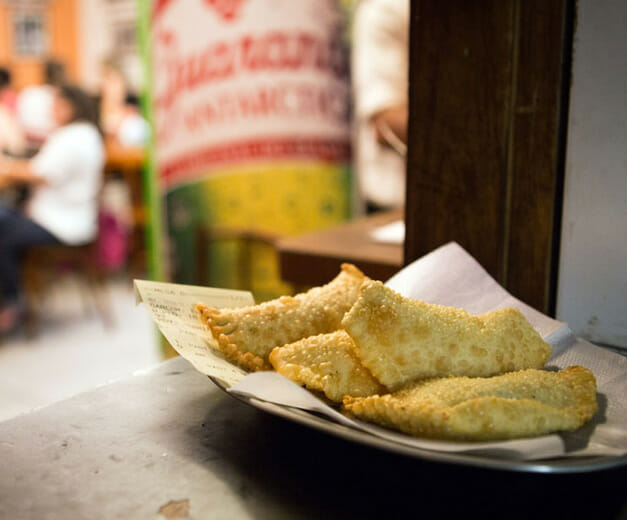