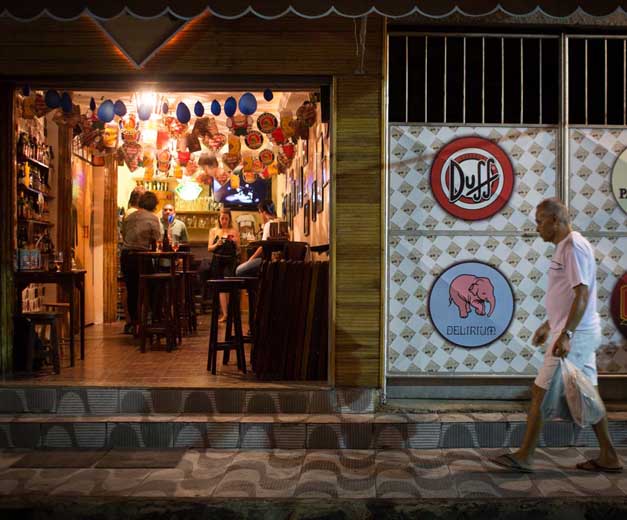 Favelas just aren’t what they used to be – or what you thought they were. Rio’s squatter settlements have grown up, though uneven development still leaves considerable gaps in terms of policing, sanitation, sewage and public services. But the favela label is increasingly arbitrary as Rio’s “slums” – we put that in quotes because we think that word often leads to some generous and inaccurate flights of imagination – start to look more like working-class bairros. And they’re working their way up to becoming the more intriguing and inviting parts of the carioca landscape.

The traditional distinction between Rio’s favelas and the middle-class neighborhoods below them is neatly conveyed in the two words locals use to refer to them: morro, those jagged hillsides to which informal homes cling precariously, and asfalto, the sturdy apartment complexes with 24-hour doormen on firm asphalted ground below them. The “separateness” of favelas has long been recognized as a fiction, as anthropologist Janice Perlman described in her seminal 1976 work, The Myth of Marginality. (Perlman argued that while the Right saw favelas as pockets of misery simmering with resentment ready at any moment to rebel against the opulence around them – and the Left, well, hoped they indeed would – favelas were deeply integrated with the formal city, albeit in a way detrimental to the favelados’ interests.) While wealthy Zona Sul residents viewed the chaotic mish-mash of brick houses and narrow hillside streets as a terrifying no-man’s land, favela residents themselves have long been transiting between the formal and the informal city during rush hour each day, descending en masse to become the asfalto’s maids, drivers, handymen and so on.

Complexo Alemão and its neighboring Vila Cruziero were once called by the main Rio daily O Globo “o cóvil do tráfico,” or the den of traffic – the drug kind, that is. Three years ago the Rio police, backed by the military, invaded the favela with tanks and armored vehicles. A Globo helicopter filmed a “fuga” (fleeing) of armed traffickers that became an internet sensation and left many asfalto residents – then seeing a trafficker for the first time – scratching their chins and questioning their deeply held fears: So it was these scrawny boys in board shorts that left us terrorized for so long?

The military occupied the community, and 24-hour policing units, called Units of Pacifying Police, moved into the massive Complexo, as they have done in dozens of favelas across the city. In the meantime, Marcelo 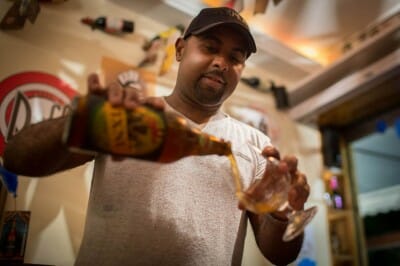 Ramos Andrade was initiating his love affair with beer. Born and raised in Alemão, his day job is repairing telephone lines, and he began sipping imported beers when he would get off work downtown. Dreaming of his own watering hole, Marcelo constructed Bistrô Estação R&R, a bar that gives the marginality myth a run for its money, in his father-in-law’s unused two-car garage.

The early days weren’t easy: Marcelo and his wife had to buy their own signs with the beer brand names to decorate the walls. (Those are usually given by companies to established bars for free.) But business and profit came quickly after Estação opened a year ago. Marcelo added tables, an awning, more freezers, an AC unit, and an illuminated garden along the concrete factory wall across the street. Wicker shades cast a cool kaleidoscope of shadows and light on the high bar tables and stools. The tile in front of the bar is an imitation of the black-and-white waves that are a hallmark of the Copacabana beach sidewalk.

“Now they [the beer brands] ask us to put signs up,” says Gabriela Romualdo, Marcelo’s wife.

In a city that gets its kicks off of chopp – cheap draft beer that cariocas drink for quantity, not quality – Marcelo’s beer menu and expertise rivals that of the few asfalto establishments that have made a niche in the specialty beer circuit. Any beer nut will recognize their favorite brands: Brooklyn Lager, Paulaner, Red Stripe, Leffe, Delirium Tremens; we recommend the underappreciated Brazilian brands, like Sputnik and Colorado. Our top choices are Colorado’s Vixnu, a flavorful IPA heavy on the hops (lúpulo) and, for a novelty Brazilian option, 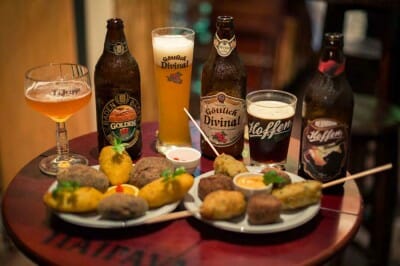 the Göttlich Duvival, brewed with guaraná, the powerful red Amazonian berry. Marcelo says he will even have his own Alemão brew available in early 2013, “God willing.”

Clients divide evenly between favela residents and outsiders. Marcelo blocks off the streets in front of the bar on Saturdays and plays music from boom boxes, turning “Baixo Alemão” (the locals’ coy nod to the area called Baixo Leblon, the poshest part of the poshest neighborhood in Rio) into the chic place to bring a date. Marcelo says it’s packed on the first two weekends of the month, while pockets are still fat from monthly paychecks. For the second two weekends of the month, he cuts his staff down from four to two to adjust for the lower demand.

The bar’s finger-food appetizers come from Gabriela’s mom, who whips up a variety of chewy bolinhos (small croquettes) that are Estação’s staple. The bolinho de feijoada comes with the entirety of the traditional Brazilian meal (salty pork, black beans and collard greens) ingeniously packed into each ball, and the bolinho de arroz is filled with a creamy cheese. Meat-lovers can order the bolinho de costela (rib) or beef-stuffed pastel de angu. 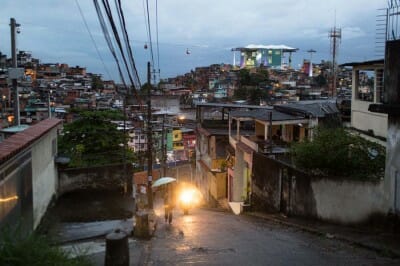 Not everyone’s so enthusiastic for Alemão. Gabriela recalls a series of derogatory comments that were posted on some of the first articles in the local press about the bar, such as: “Only a drug trafficker can afford a 50-real beer.”

And yet, Marcelo says the Bistrô is a comfortable place for beer-loving Alemão residents to try new brands, especially since he sells them for cheaper than the asfalto bars. “They’d go out and be embarrassed to order a beer,” he said of his Alemão clients. Here they drink less, but they drink better. “People dress up to come here!” Marcelo says, with no attempt to hide his own surprise and pleasure over this. 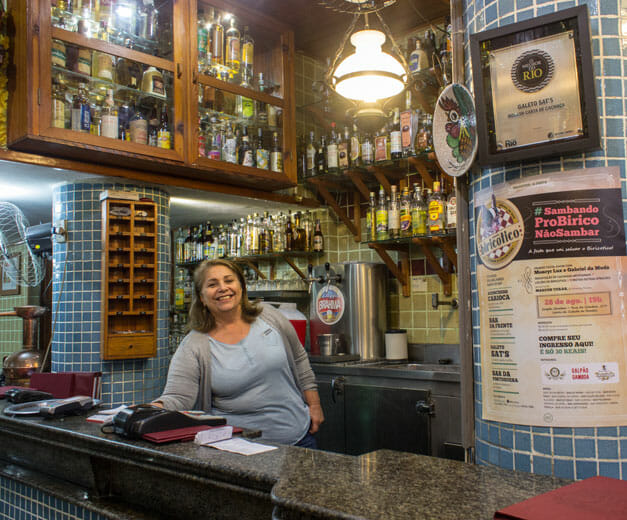 Rio | By Juarez Becoza
By Juarez Becoza
RioAlthough there are plenty of bars on Copacabana’s famous Avenida Atlântica – or even at the beach, at the so called quiosques – very few are worth a visit. Many are just tourist traps. Others are much too expensive. No, the really good bars in Copacabana are inland, along Barata Ribeiro street. That road, along with… 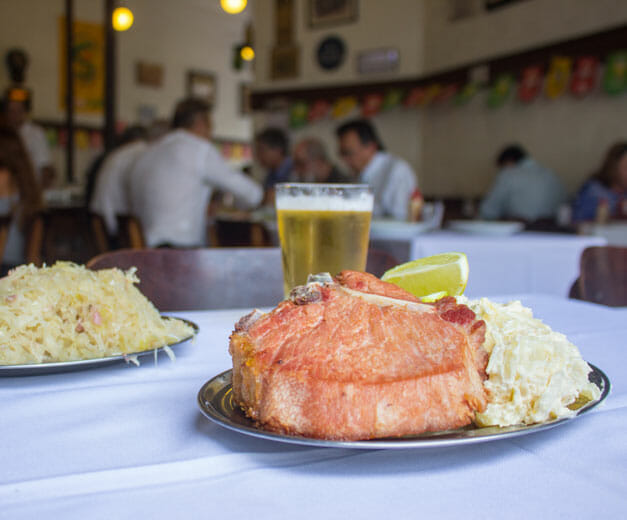 Rio | By Juarez Becoza
By Juarez Becoza
RioIn just a few hours, Germany will play Brazil in a World Cup semi-final match, but the outcome doesn’t matter. Win or lose, Germany has already conquered this nation – gastronomically speaking, at least. This isn’t fancy gastronomy, of course (leave that to the French!), but the simple, hearty, delicious food that the best Brazilian…

Add to favorites
Bistrô Estação R&R
Travessa Jalisco 32, Inhaúma (Take the metro to Nova América/Del Castilho, and catch the 629 bus to get off at Estrada Itaóca, or take a short cab ride. Bar is behind Fábrica Café Capital.)
Tel. +55 21 3884 8388
Hours: Thurs.-Sat, 6pm-2am