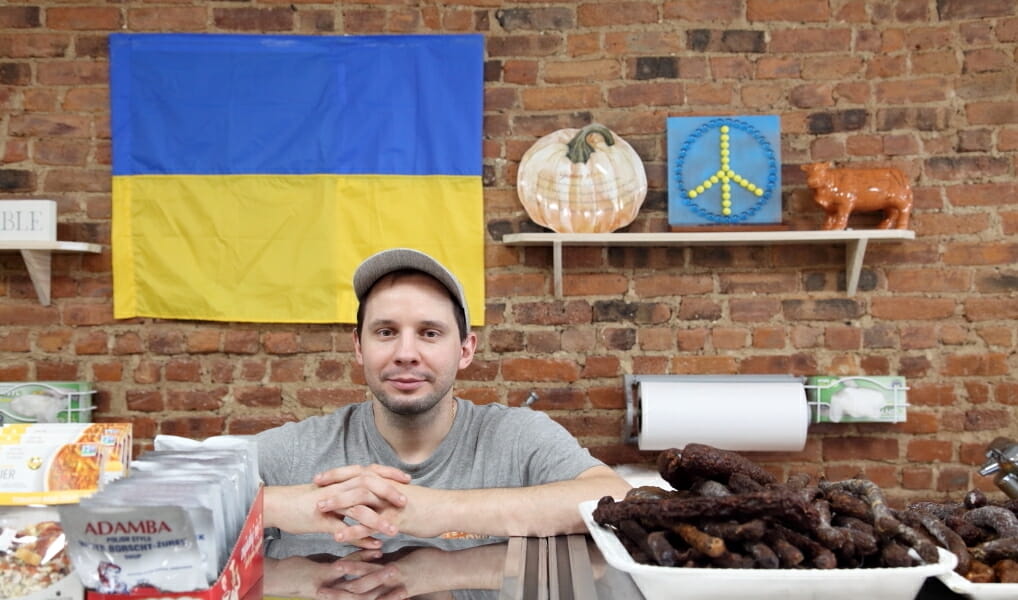 “Taste of childhood.” At Varenyk House, a Ukrainian deli-grocery in Ridgewood, this hand-lettered sign for imported halva – made not from sesame but from sunflower seeds, which are much more widely harvested in Eastern Europe – seemed poignant even when we first saw it, early in 2022. The sentiment has become only more heartfelt since Russia’s unprovoked and vicious invasion of Ukraine.

The owner, Stepan Rogulskyi, lives with his wife, Natalya, and their two young daughters in Maspeth, the Queens neighborhood just north of Ridgewood. His first home, however, was the city of Truskavets, in western Ukraine; his two brothers, his parents and his paternal grandmother still live there, or nearby. Stepan, 33, has returned to Ukraine many times since he first came to the United States, in 2008, but his most recent visit, wife and daughters in tow, was during the summer of 2021. 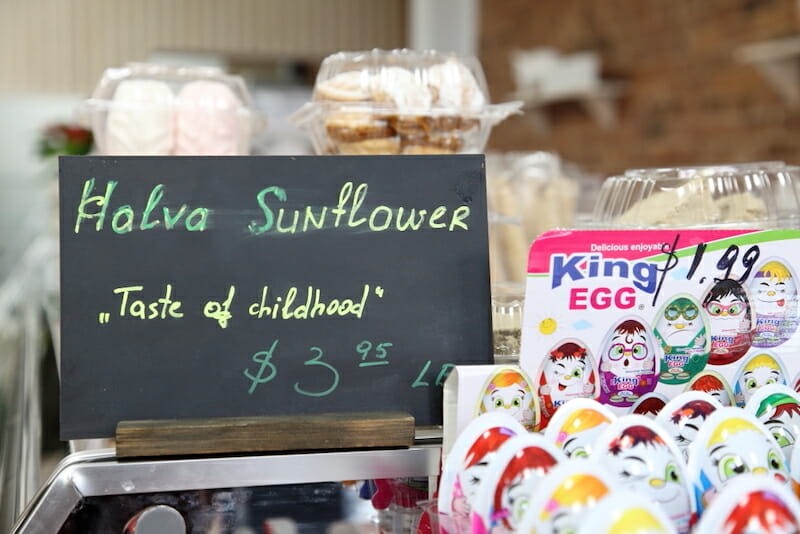 During the first weeks of the war, Stepan called Ukraine several times each day to check in on his extended family. Thankfully, he now feels able to call less frequently (though still more often than before the war). Maintaining reliable connections with his Eastern European suppliers, on the other hand, has become increasingly challenging, Stepan tells us: “The situation changes every day.”

Varenyk House, which opened in the autumn of 2021, counts many Polish markets, bakeries and restaurants as neighbors, but, to our knowledge, is the only Ukrainian shop for miles around. Considering, however, that the two cuisines are hardly strangers – as we’ve been repeatedly reminded in recent months, the Polish and Ukrainian peoples are neighbors in Europe as well as in Queens – Varenyk House has a broad customer base nearby. Still more customers, Stepan adds, drive “from Connecticut, New Jersey and Long Island.” 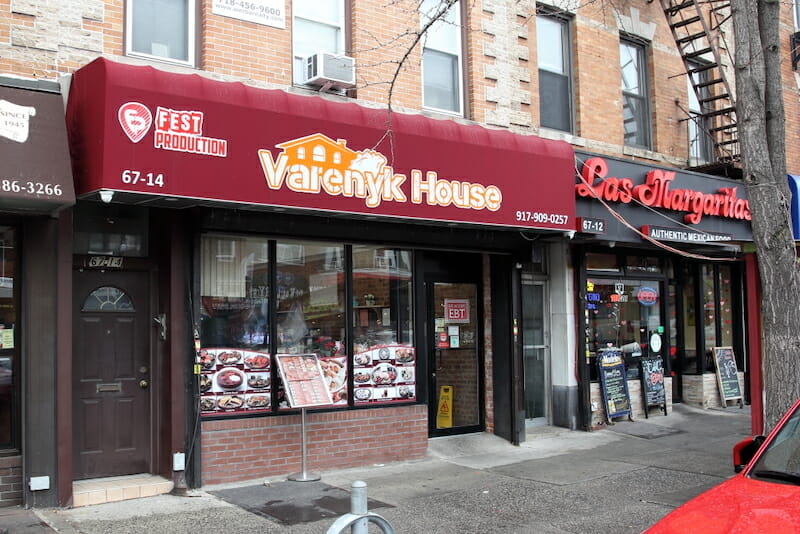 When customers arrive at Varenyk House, one of their first sights is a stack of shopping baskets by the door, in blue or gold, the Ukrainian national colors – think of a clear sky above fields of grain. These baskets can fill up quickly. To one side of the shop is a display case laden with sausages, smoked meats and the like, which draw on Stepan’s past experience as a butcher at a Polish meat market in Greenpoint, Brooklyn. To the other side, closely packed shelves provide evidence of his savvy in importing and stocking foods from back home. The featured attraction, all the way at the back, is a well-provisioned buffet of cooked foods (alas, for takeout only).

When Varenyk House first opened, Stepan tells us, “my wife was in charge” of developing the recipes prepared by the small kitchen crew. Nowadays, Natalya comes in every so often for quality control, or Stepan takes something home for her to taste, and on which to make notes. 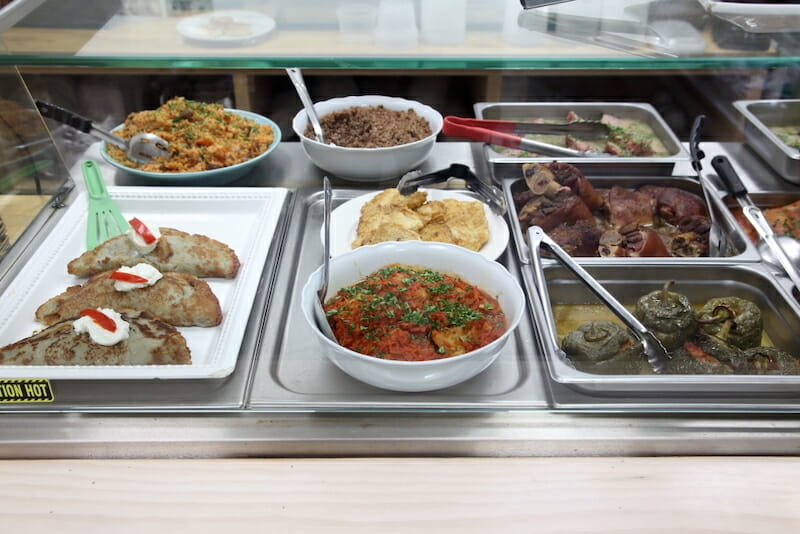 The namesakes of Varenyk House, as we’d expect, take the pride of place in a freezer display beside the buffet, as well as on the menu. Stepan’s shop offers the “biggest variety of varenyky in New York City,” he tells us, “all handmade.” These half-moon dumplings are offered in nearly three dozen varieties, both savory (beef short rib is very popular, Stepan observes) and sweet (we’re equally fond of farmer cheese and sour cherry). Bespoke fillings are an option, too. Many customers cook their own varenyky at home, but the kitchen will also boil or pan-fry them on the spot and partner the varenyky with sour cream, caramelized onion and apple sauce.

Varenyk House, to our knowledge, is the only Ukrainian shop for miles around.

There’s so much more we’d like to try, limited only by our appetite. On one early visit, we secured a sampler including meatballs, fried potatoes, cucumber salad and, best of all, stuffed cabbage. Another time, we noshed on a triangular puff pastry called a piroshki. And on one decadent afternoon, we carried off a portion of “lazy black sausage,” which offers everything but the casing of a black (that is, blood) sausage. No knife needed, and no niceties, either — we ate it straight from the container. 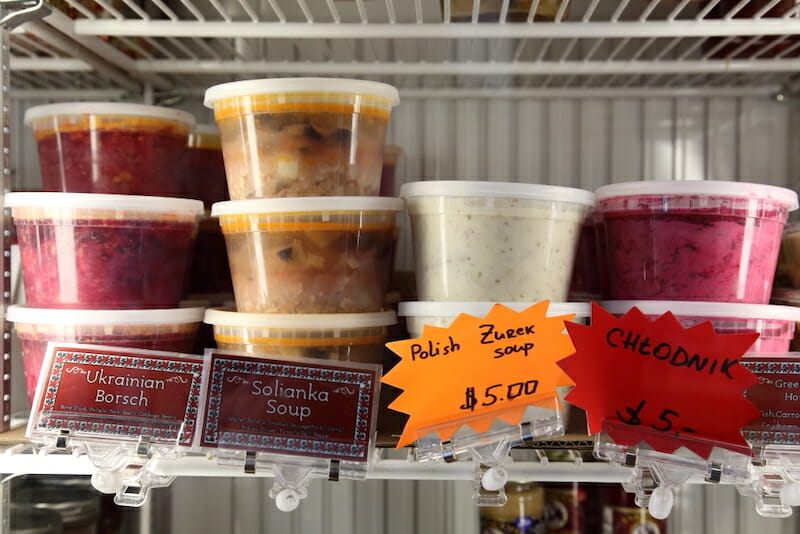 Ukraine itself comprises different regions, and, Stepan observes, “one dish can be cooked different ways.” Of the “100 versions of borscht” that have been identified, he continues, Varenyk House offers “the most traditional,” a beet-reddened style of this iconic soup. And others, too: On one sweltering summer day, we cooled off with chłodnik (pronounced “hwoad-neek”), a chilled, magenta-hued Polish variation.

In the months since Varenyk House first crossed our radar, the menu of ready-to-eat food seems to have grown only broader and deeper. (Natalya, we trust, continues to develop recipes.) Imports are another story. Before the war, Stepan tells us, he stocked more products from his home country than he does today; he points out some candies, and a few other items, that still are able to endure what’s now a difficult journey to the States. The shop’s sunflower-seed halva, by contrast, is currently made in Latvia. To our amazement, Stepan still imports par-baked bread from Ukraine – but only via a detour through Poland.

No single company can be relied on to preserve the supply chain, Stepan elaborates. He needs to regularly reassess Varenyk House’s business partners – a process that must be incredibly tedious, if not troublesome, we reply. “I take it very simple and easy,” Stepan tells us, and “find some way” to keep things going. Serving good food is essential; the support of good neighbors goes hand in hand. 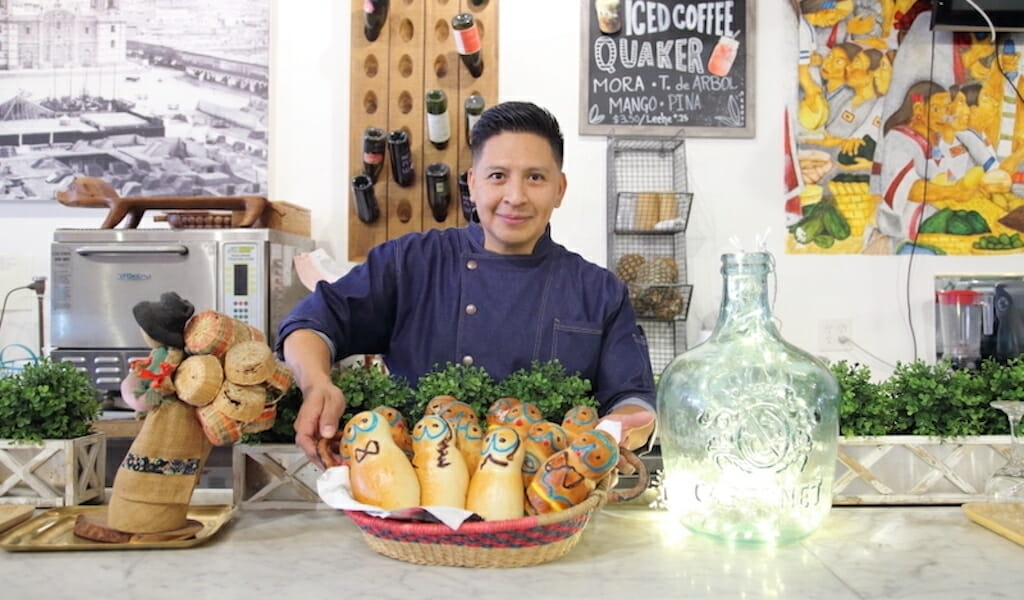 Queens | By Dave Cook
By Dave Cook
QueensEach year in late summer, some of the best athletes on the planet converge on Flushing Meadows Corona Park to compete in the United States Open Tennis Championships. In 2022, the U.S. Open begins with practice sessions and qualifier matches on Tuesday, August 23, and concludes with the men’s singles final, scheduled for Sunday, September… 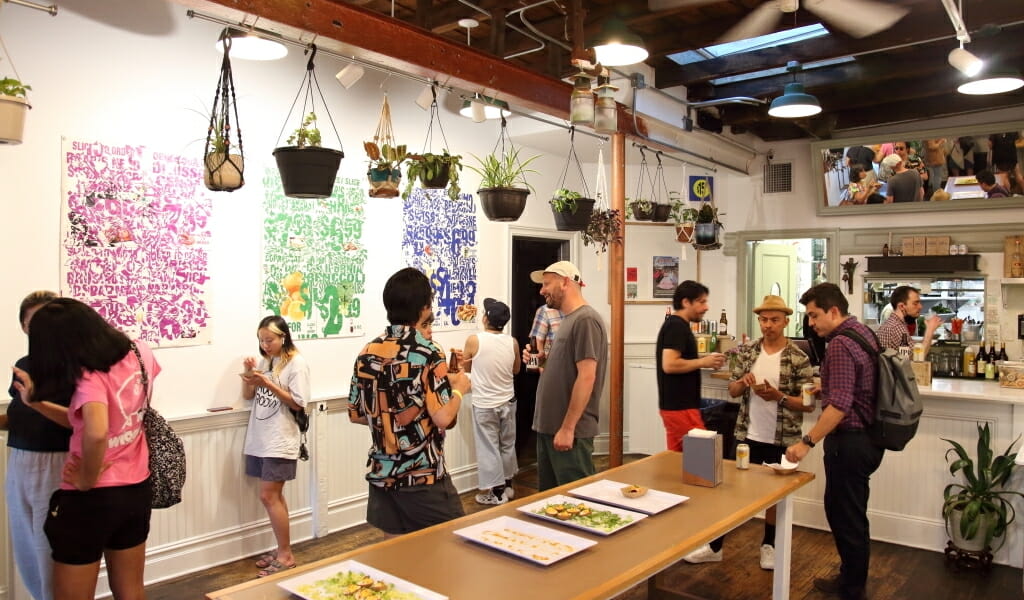 Queens | By Dave Cook
By Dave Cook
QueensA "blank canvas." This was Fred Hua's first impression of the bright and airy space that would become Nhà Mình, his Vietnamese restaurant and coffee shop in Ridgewood, Queens. Like Fred's bygone restaurant of the same name, which had closed several years earlier, Nhà Mình offers a gallery for exhibits by local artists, room for… 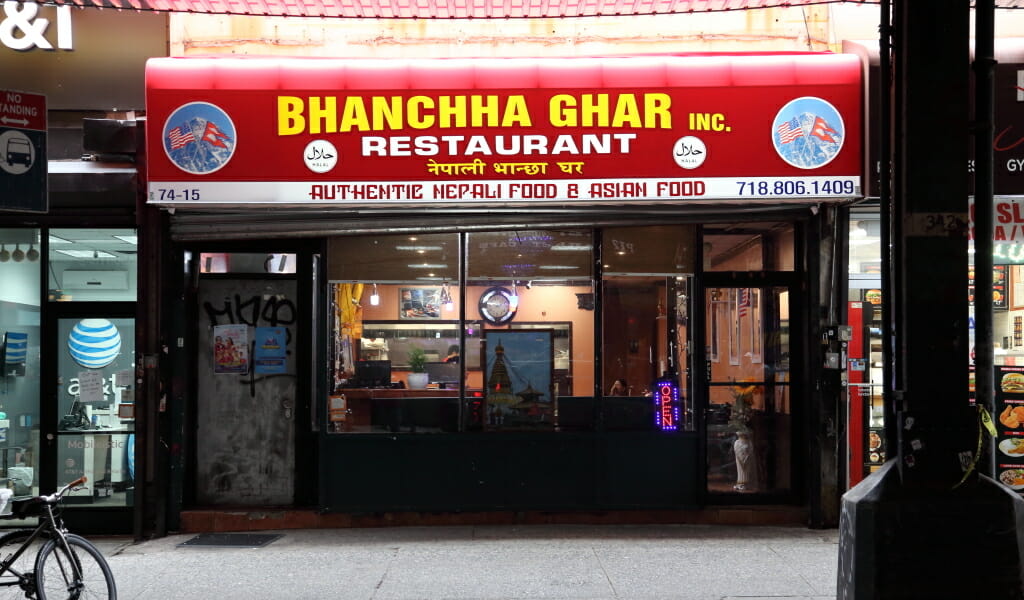