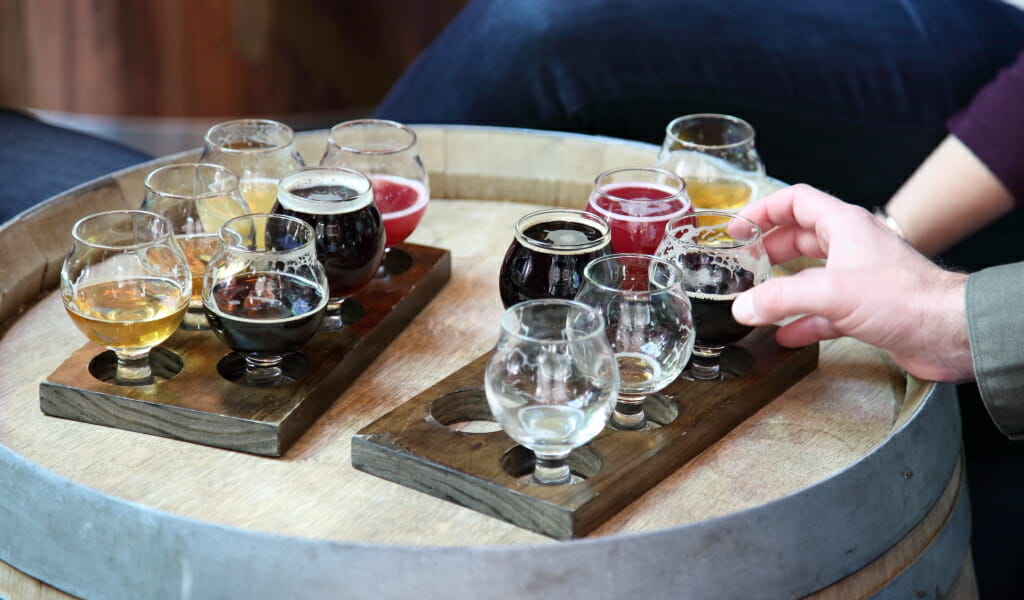 Big aLICe is a New York State farm brewery. That status, which mandates certain levels of collaboration with local growers and other producers, also dovetails nicely with the predisposition of co-founder Kyle Hurst toward wildly varied styles and flavors of beer. The brewery’s “two longest-standing relationships,” Kyle says, are with Native Coffee Roasters and Wilk Apiary; coffee and honey each figure in the regular rotation of Big aLICe beers.

And lemongrass? As best as Kyle can recall, originally it was part of a grab bag of produce that inspired one of his early beers. Thinking of the TV show focused on culinary competition with unlikely ingredients, Kyle says that some of his first brewing efforts were “a lot like Chopped.”

None of this was on Kyle’s mind when he moved, with his family, from Wisconsin to the Hudson Valley, upriver from New York City, in 2008. He’d been a consumer of beer but never a producer until “my wife bought me my first homebrew kit.” The joy of crafting his own unique drinks, he soon discovered, was shared by several colleagues at the commercial air-conditioning company where he worked in Long Island City. 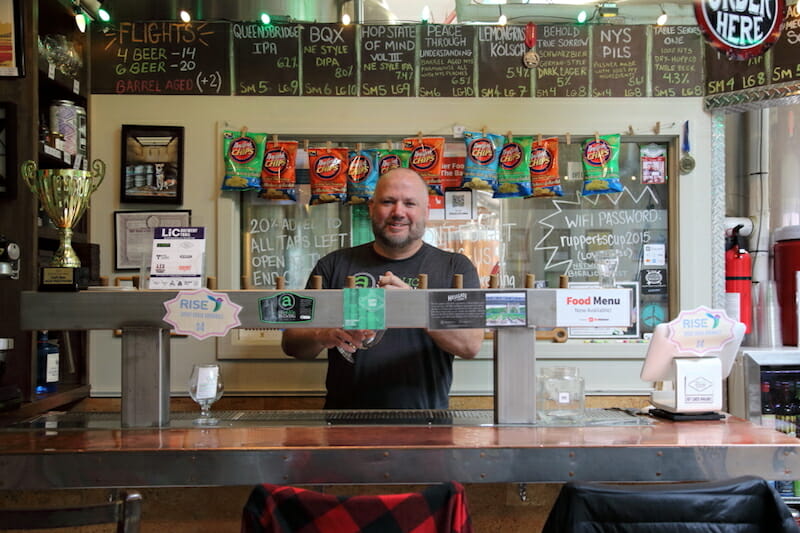 While discrete corners of this neighborhood have become hubs for office workers and courthouse employees – it’s a short subway ride to Manhattan – much of Long Island City retains a blue-collar feel. A prominent feature on the skyline are the four red-and-white-striped towers of the Ravenswood Generating Station, whose largest power plant, built by the Allis-Chalmers Corporation, is known as Big Allis. With a tweak to include the common abbreviation for Long Island City – LIC – Big aLICe was born.

When Big aLICe opened in 2013, on the former site of a bible warehouse, Kyle and his partners were brewing just one weekend a month, on an extremely small scale, while retaining their day jobs. Jon Kielty, today the head brewer, then worked in the construction industry, on heavy-duty foundation drilling; he began as a Big aLICe volunteer that spring.

New Year’s Day 2013 also saw the implementation of New York State’s farm brewery law. Originally the law required that at least 20 percent of hops and 20 percent of all other ingredients be grown in New York State. The current thresholds are set at 60 percent; by 2024, the requirements will be 90 percent.

In exchange for promoting the growth of the New York businesses that supply it, Big aLICe’s standing as a farm brewery entitles it to serve beer by the glass – by far the most profitable part of any small brewery’s business – without the need for an additional license. (In New York State, such licenses are notoriously difficult to come by.) 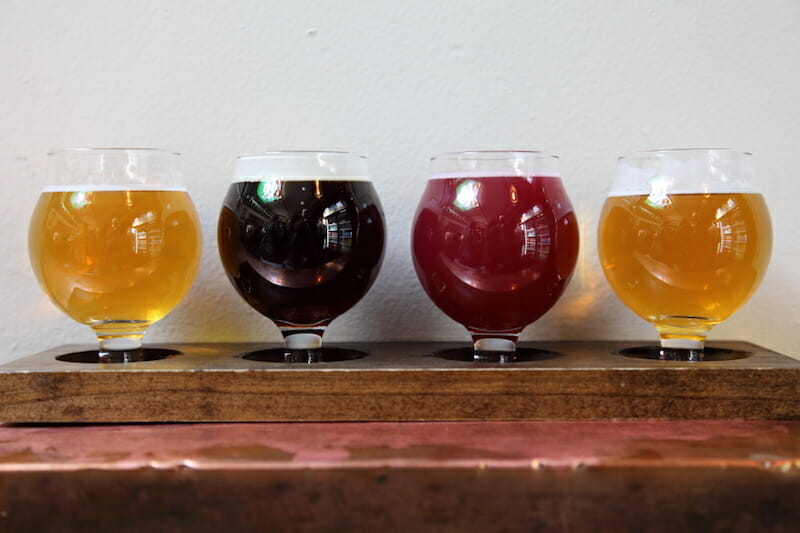 To be sure, by-the-glass customers are generally much less interested in the regulatory backstory than in interesting beer. To flavor Big aLICe brews, Jon has personally picked local Montmorency cherries in the yard of a fellow homebrewer, gathered jalapeño peppers at nearby Hellgate Farm and donned a beekeeping suit to harvest honey at Wilk Apiary. Picking those local cherries wasn’t possible this year, Jon says; visiting farms outside the city was more productive. Fix Brothers Fruit Farm, in the Hudson Valley, ultimately furnished the brewery with New York State cherries, and peaches, too.

Jon observes that many immigrants, especially from Italy, Greece and Croatia, brought plant cuttings – for example, of fig trees – and transplanted them in Queens. He speaks with pride about culturing “our own house saison yeast” by immersing local figs into unfermented wort, the liquid produced by milling and steeping malted grain early in the brewing process. Today this yeast, which Big aLICe uses for its Queens Farmhouse ale, is banked at a Midwest yeast lab, but it remains rooted in Queens and proprietary to Big aLICe.

To flavor Big aLICe brews, Jon has personally picked local Montmorency cherries in the yard of a fellow homebrewer, gathered jalapeño peppers at nearby Hellgate Farm and donned a beekeeping suit to harvest honey at Wilk Apiary.

Big aLICe also works with nearby farmers and producers at later stages of the brewing process. Much of the spent grain – the malt and adjuncts left over after the extraction of the wort – is carted elsewhere as animal feed, or as compost. In Astoria, Phoenix Bakehouse has transformed Big aLICe’s spent grain into sourdough bread. Brooklyn-based Rise Products, which also works with many other small New York brewers, bakes spent-grain brownies and markets a brownie mix for DIYers.

As of 2019, Big aLICe has a second location in Industry City, a 16-building, 35-acre complex established in the 1890s as a manufacturing and distribution hub on Brooklyn’s Upper New York Bay waterfront. Much of the wood that furnishes the Brooklyn barrel room, as it’s called, was reclaimed from disused parts of the complex.

Like the original brewery and taproom, the newer barrel room caters to a walk-up clientele, including a new and diverse audience that also patronizes the many other food businesses in Industry City. Both locations currently offer outdoor seating that abides by New York’s socially distant dining and drinking regulations; the even stricter regulations for indoor service are probably unworkable in the tight quarters of the Queens taproom. But with the aid of electric heaters, Kyle says, Big aLICe will try to offer outdoor service “as best we can year-round.” 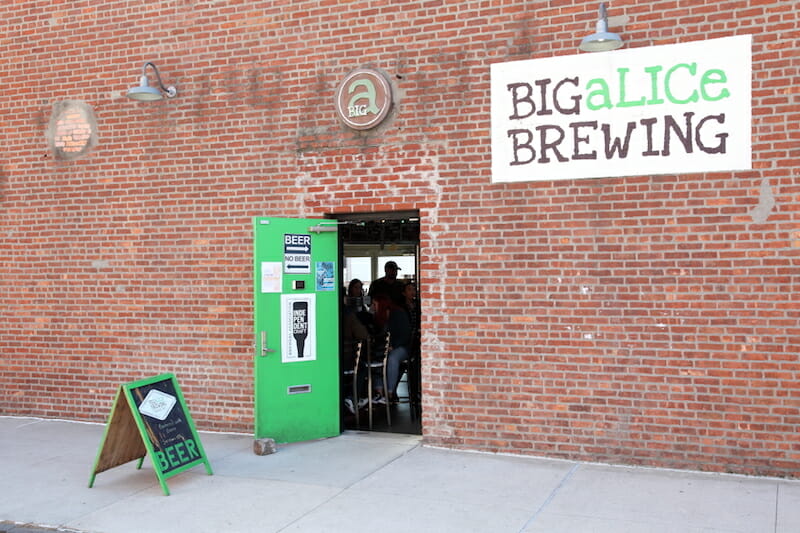 The much larger Brooklyn space has also enabled Big aLICe to greatly expand the barrel-aging program launched in Queens several years ago. When filled with beer, Jon notes, a newer barrel might impart wine character; a barrel that had already been used for aging might predominantly impart oak character instead. Later in its lifetime, the barrel might serve as a vessel for souring beer. Still later, it might become furniture, Kyle adds, nodding toward several upturned barrels surrounded by stools.

In October, another of Big aLICe’s barrel-aged beers journeyed to Denver for the Great American Beer Festival – the “Super Bowl of beer competitions,” Kyle calls it. (Kyle and Jon stayed home; this year’s festival was a virtual event.) In the Fruited Wood- and Barrel-Aged Sour Beer category, the gold medal was awarded to Big aLICe’s The Many Lives of Our Lives, brewed entirely with New York State ingredients – notably, cherries and blueberries.

What might be even more impressive is Big aLICe’s gold medal as Small Brewing Company and Small Brewing Company Brewer of the Year. So while it’s true, alas, that the 2020 release of The Many Lives of Our Lives is sold out, on any visit we have more than two dozen drafts, cans and bottles to choose from. The harvest is in – let’s raise a glass! 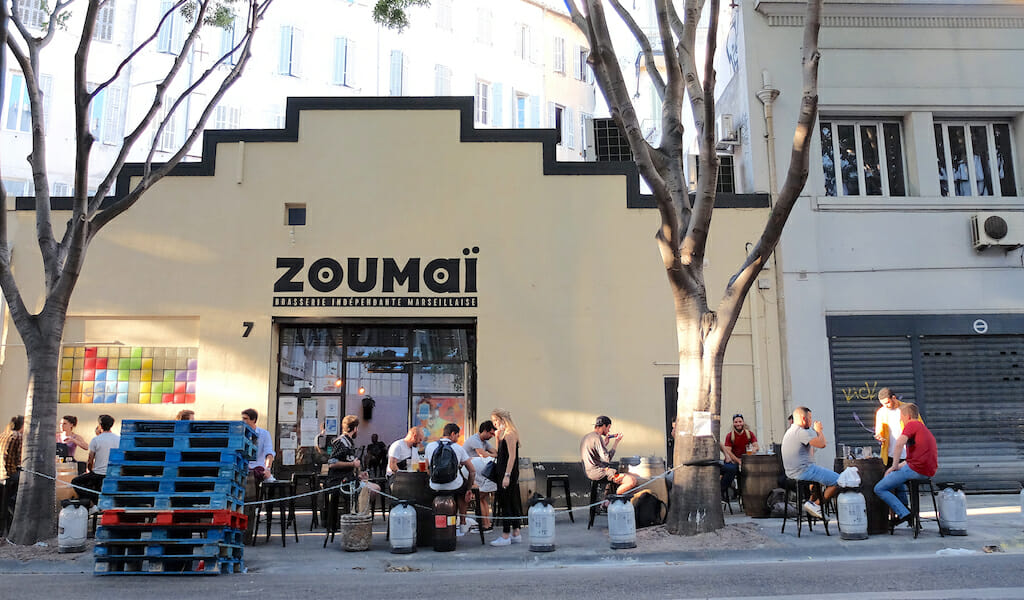 Marseille | By Alexis Steinman
By Alexis Steinman
MarseilleThough France shares a border with Belgium and sits across the English Channel from the UK, the country doesn’t have as big a beer culture as its neighbors. The French consume less than half of the European average of seventy liters per person. Even their most-quaffed beer, Heineken, isn’t made on their soil. The Dutch… 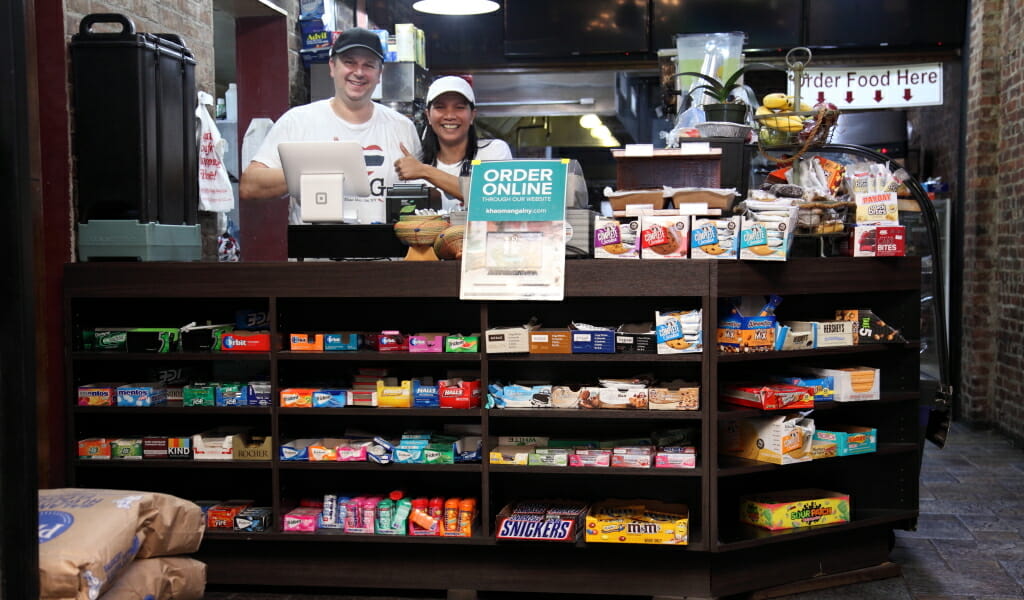 Queens | By Dave Cook
By Dave Cook
QueensSome of the most successful street vendors in Southeast Asia have made their name from a single dish. The same is true in Queens – just ask anyone who has walked along Roosevelt Avenue late on a summer evening in search of the “Arepa Lady.” Surprisingly, it’s also true inside Bricktown Bagels, in Long Island…
Big aLICe Brewing