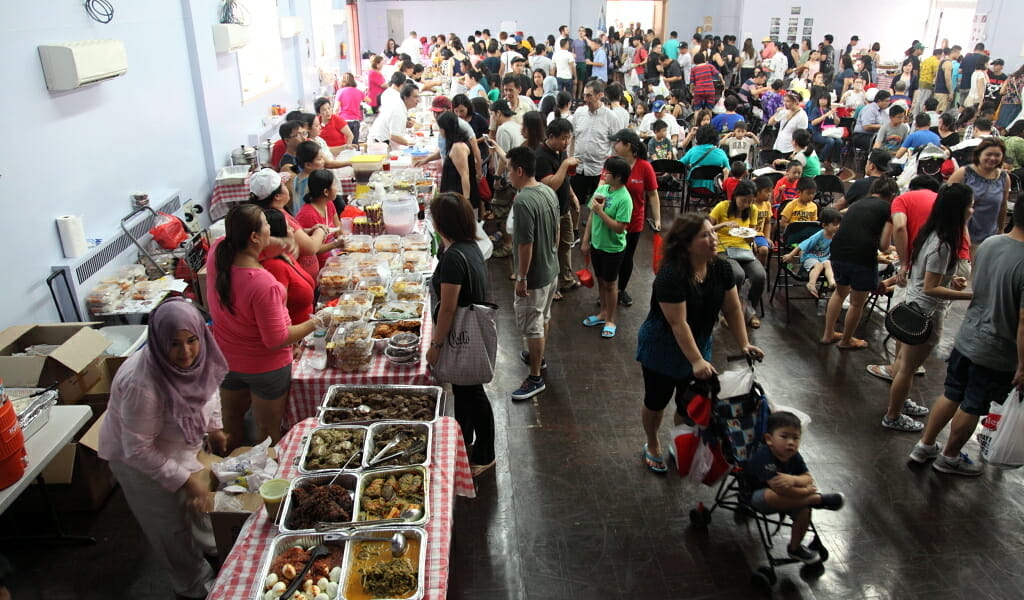 For years we’ve looked into every Indonesian nook and cranny in New York, yet we always discover something new at the monthly Indonesian bazaar at the St. James Episcopal Church.

Indonesia, the fourth-most-populous country in the world, comprises some 17,000 islands that stretch over a vast archipelago of diverse culinary habitats. We’ve tasted dozens of dishes and witnessed dozens more, but there must be so many soups, and stews, and fritters, and fishcakes that we have yet to set our eyes on – not to mention desserts that can be as bright as any jungle butterfly. 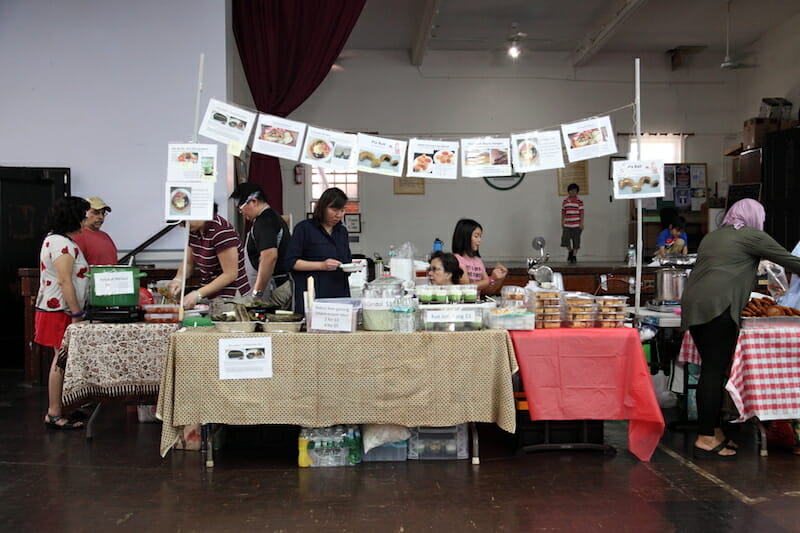 Since the summer of 2016, the bazaar has been held in a high-ceilinged, sunny parish hall in Elmhurst, Queens, that can accommodate 20 vendor tables. Some hang professionally printed banners, but many rely on simple handwritten signs.

The setting was even more modest four years ago, when Fefe Anggono (her first name is pronounced “Fee-fee”) organized the first of these bazaars at a small church in nearby Woodside. Anggono was raised in East Java, Indonesia, in the port city of Surabaya, where cooking classes were part of the curriculum even in elementary school. During the economic and social turmoil that accompanied the Asian financial crisis of the late 1990s, she emigrated to the United States, and for seven years she owned a restaurant in New York’s suburbs. Anggono sold that business to focus on her family, but she never abandoned her desire to prepare and share her home country’s cuisine.

Make that “cuisines.” The vendors and the guests who assemble each month reflect Indonesia’s multiple religions and many cultures. (Particularly among the guests – this also holds true at the long-running outdoor bazaar beside Masjid al-Hikmah, in Astoria, Queens, which takes place periodically in warmer weather, except during Ramadan. Some vendors at St. James are also familiar faces at al-Hikmah, and, when the mosque’s bazaar is in full swing, it’s not unusual to see the shuttle bus of a local Indonesian church parked nearby. Good food is good food.) 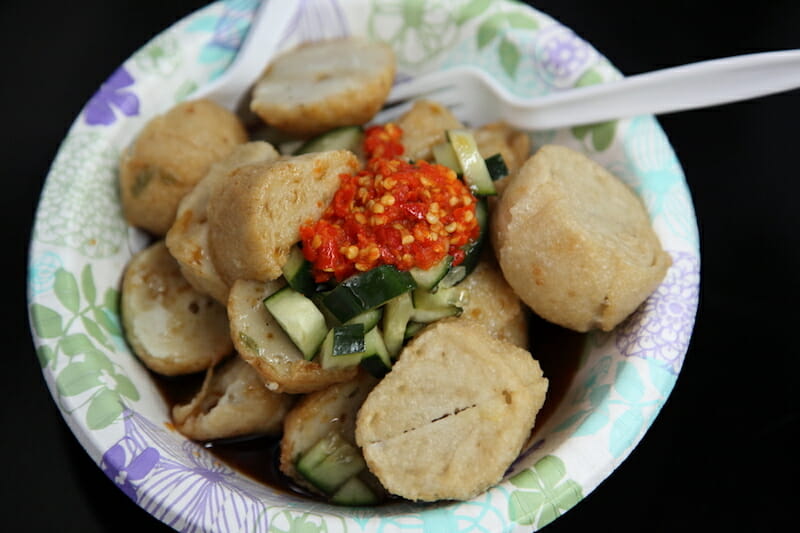 Anggono’s own table at the bazaar is named Taste of Surabaya; we marvel at the golden color of her nasi kuning, yellow rice encircled by many accompaniments, and inhale the fragrance of lemon grass, ginger, coconut milk, lime leaf and pandan. The family at the Pecel Ndeso table also hail from Surabaya (and now make the monthly drive from Philadelphia); we relish their gulai usus sapi, curry stuffed beef intestine with eggs and tofu.

Nurhayati Tios Sumarto, the guiding hand of Dapur The Tio’s (The Tio’s Kitchen), was raised in Central Java; her bubur ayam, rice porridge dressed with shredded chicken, preserved vegetables and toasted soybeans, is perhaps the most comforting food we’ve enjoyed at the bazaar. Her cupfuls of es doger, a pink-hued melange that straddles the boundary between cooling drink and playful dessert, is certainly one of the most colorful.

The husband and wife at the Warung Kita table come from Bangka, a scenic isle just east of expansive Sumatra. But they add a sauce distinctive to Jakarta, in neighboring Java – sautéed candlenuts, garlic and shallots – to their trademark stir-fried noodles, mie tek-tek. Why that name? Pay heed to the sound, as noodles are tossed, of ladle on wok: tek-tek, tek-tek, tek-tek. Every vendor has a story, but none keeps better rhythm.

Inevitably our gaze alights on the open door in one corner, and the smoky haze beyond. They beckon us toward what might be the bazaar’s most easily recognizable dish, prepared by Tutti and Sonni Sahara of Tuson Sate. Sonni, in the company of charcoal-grill kibitzers, puts skewers of beef, chicken and lamb to the flame; Tutti and her helpers add the fixings. The most transformative touch is a hearty dollop of Tutti’s spicy homemade peanut sauce. The skewered meats are familiar, yet new. Will one order be enough?

Editor’s note: The next Indonesian Bazaar will be held on Saturday, January 20, from noon until 5 p.m. We highly recommend attending – it’s a quintessential Elmhurst experience and the perfect place to start exploring this lesser-visited neighborhood. This article was originally published on July 31, 2017.

Join us for a day of delicious discovery in Queens.

Queens | By Dave Cook
By Dave Cook
QueensFor years we’ve looked into every Indonesian nook and cranny in New York, yet we always discover something new at the monthly Indonesian bazaar at the St. James Episcopal Church. We’re not surprised. Indonesia, the fourth-most-populous country in the world, comprises some 17,000 islands that stretch over a vast archipelago of diverse culinary habitats. We’ve… 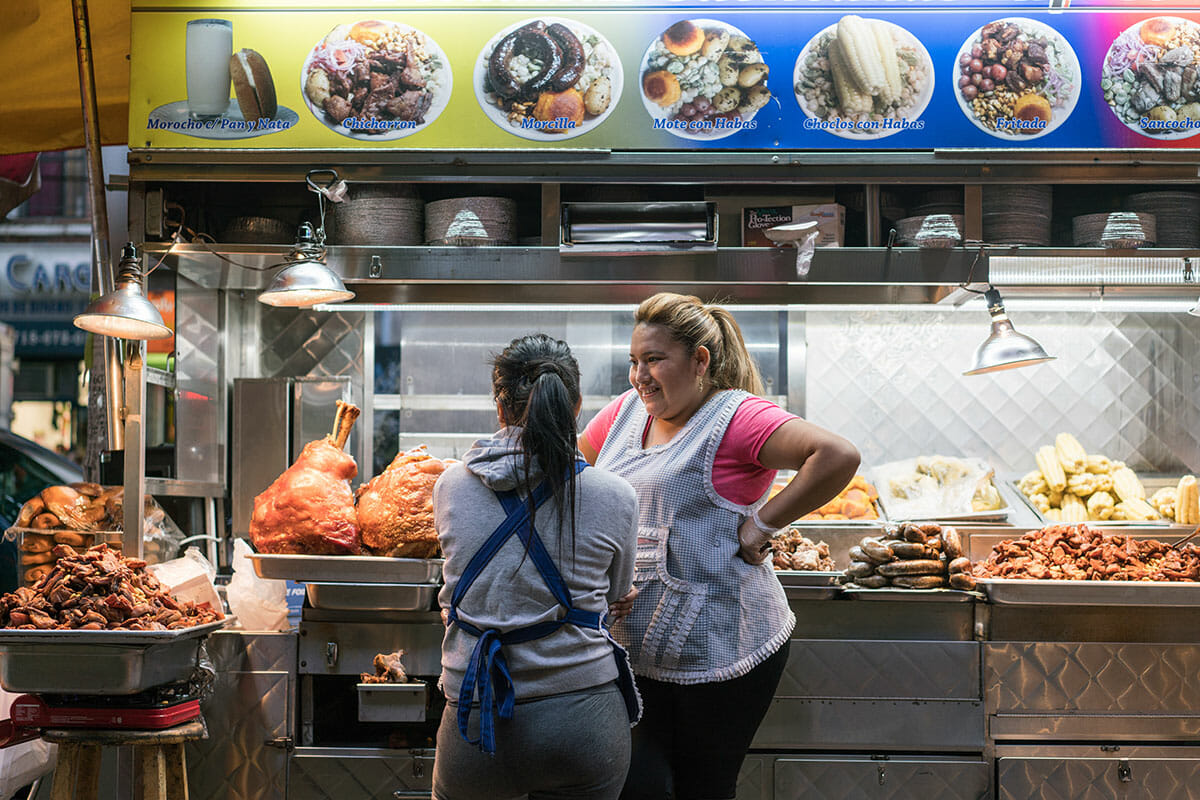 The United Kitchens: Going Deep in the Borough of Global Eats

Queens | By Madeleine Roberts
By Madeleine Roberts
QueensQuick bite:  On this full-day, deep dive into the immigrant cooking experience in Queens, we’ll visit Corona and Elmhurst, two unassuming neighborhoods that have managed to stay under the radar while other parts of the borough have become increasingly popular destinations. The largest of New York’s five boroughs, Queens is the home of over two… 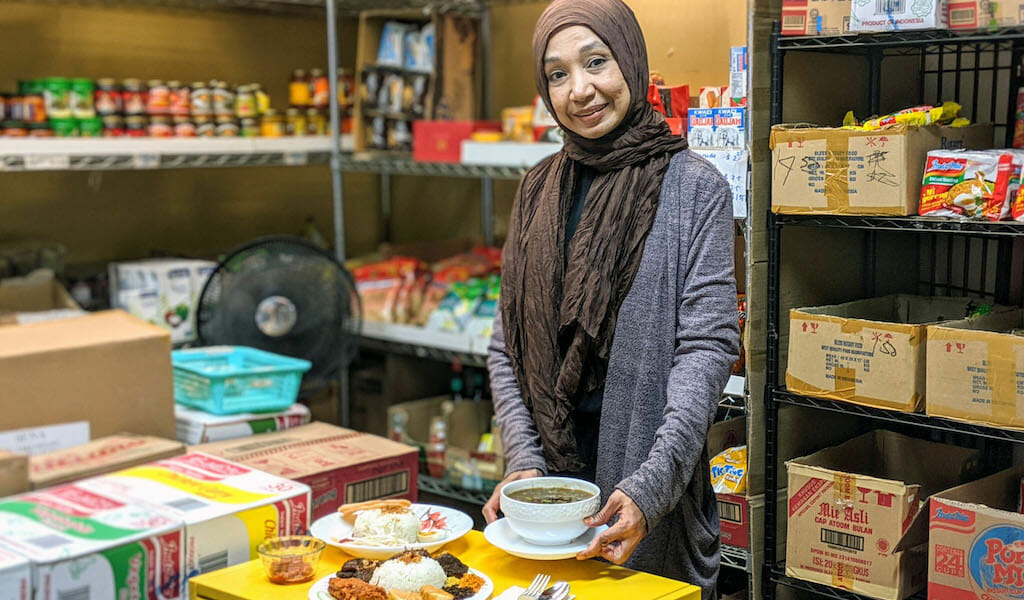 Join our walk for a deep dive into the immigrant cooking experience in Queens!

Queens | By Jared Cohee
By Jared Cohee
QueensFor those not in the know, the bright yellow table behind the shelves at Indo Java Groceries in Elmhurst, Queens, may seem like nothing more than a curious design choice. But what they don’t realize is that this table is a sign of something great – it means that one of three chefs is in…
Indonesian Bazaar at St. James Episcopal Church
84-07 Broadway, Elmhurst
Tel. +1 347 615 2003
Facebook Page: Indonesia Food Bazaar
Hours: One Saturday per month, noon-5pm