El Tendajón Agavería: Something For Everyone

In Oaxaca, when friends come together to eat after a long night out, sitting down for brunch becomes a challenge – everyone has different cravings and dietary needs. In the heart of the city center, there is a place with something for everyone: Tendajón Agavería. The all-day eatery is a true standout among the numerous restaurants that serve classic Oaxacan food, offering a variety of dishes that oscillate between traditional and innovative flavors. From the Croque Madame with smoked quesillo to a fresh poleo mint couscous with shrimp cooked in chintextle (chili paste), the menu has a strong Oaxacan overtone interpreted in very unexpected ways. “I want people to be able to try and discover flavors beyond the common ones, and I want my clients to cross that threshold through my food,” explains Andrea Sánchez López, age 31, Tendajón’s fearless head chef and owner.

Despite her young age, Andrea has always been daring in an industry historically dominated by men. As the heir in a long line of bar owners, Andrea started her career as a bar assistant in his father’s cantina (traditional bar), La Giralda, the second oldest in the city and which was founded by her grandfather over 60 years ago. After high school, she would spend summers fixing all sorts of drinks for the bar’s clients, letting her imagination and creativity run wild. In a contrast to the hectic rhythm of La Giralda, Andrea spent most of her evenings at her grandmother’s house, where she would enjoy the soothing flavors of homemade food.

“I always took cooking for granted, but when I was studying Culinary Arts I realized how lucky I was to eat my grandmother’s food growing up,” Andrea tells us. “One day, I was able to rescue from my memory her recipe of amarillo mole. My grandma was no longer with us to give a verdict, but my mole made her sons cry. I guess that meant something…This was a turning point for me, because it dawned on me that I had my memory and my imagination to tell my own story,” she adds.

The story of Tendajón Agavería starts with its name. In Mexico in the 19th and early 20th centuries, before supermarkets or modern convenience stores existed, the tendajón was a place where people could find everything they needed, as well as many novelties: sugar, medicines, canned goods, recently harvested grains, mezcal and homemade candies. The word agavería, on the other hand (from the agave plant), reveals Andrea’s intention to create a “rare library” of local mezcales. Back in 2016, when she opened the first iteration of Tendajón Agavería, she only served unique findings from small mezcal producers. After a while, clients started asking for snacks or small bites to go with their mezcal, but before Andrea could unravel her creativity, high rent and administrative challenges forced her to close. This didn’t stop her, however: “I refused to let the project die, so I made it evolve,” she recalls. A few months later, in 2017, a new Tendajón Agavería arose from the ashes bigger, better located, and with an exciting multifaceted food proposal.

Both the Agavería and the Tendajón concepts revisit the idea of the traditional expendios (mezcal stores) and the old grocery stores, respectively, with the particularity that it focuses on showcasing concoctions and dishes made with unique Oaxacan products. “I want everyone to leave satisfied and happy about the food and drinks they just had. The goal is to make Oaxacan products stand out in the most exciting way possible,” says Andrea. Proof of this versatility can be found on the drinks menu – cocktails created with locally made spirits, like rum or gin; agave drinks like pulque and mezcal; or non-alcoholic options, like ginger beer.

On the food front, the multilayered flavor of mezcal, piloncillo (molasses) and pineapple compote give a twist to the torrejas, a classic Mexican dessert that echoes French toast, while the chilaquiles bathed in salsa of chile tusta – a very underestimated type of chili in the valley but which are highly praised on the coast – are deliciously effective for hangover relief. In other words, the food and drinks at Tendajón Agavería playfully turn up the volume on recipes that would otherwise be considered plain classics.

Audacity aside, Andrea’s perspective creates space for exciting possibilities in an area full of restaurants with a more conservative approach, a lot of which are geared toward tourists. And while she welcomes locals and strangers alike, her main drive is to impress locals, who tend to be a more difficult audience as they are well acquainted with the local flavors. “I like aiming for new heights. It amuses me to show new ranges of flavors that are already known to people who have tried it all. This should be the future of Oaxacan food – to push ingredients and recipes to their limits,” reflects Andrea.

After a long night out, our brunch table could easily be transformed into an eclectic display of food – over there, we can smell a dish that pays homage to the Oaxaca market’s famous hall brimming with the smoke of tender, grilled meat. On the other end of the table, we see a delicate mushroom risotto and a dish of fluffy pancakes topped with fresh butter cream and berries, while, on the corner, the fresh ceviche full of tangy herbs and tropical fruits accompanied with a mezcal and yellow plum shrub cocktail await to be devoured. Here, everyone leaves satisfied. Through its flavorful creations and the alchemy of its leader, the Tendajón Agavería continues to bring us together for memorable feasts. 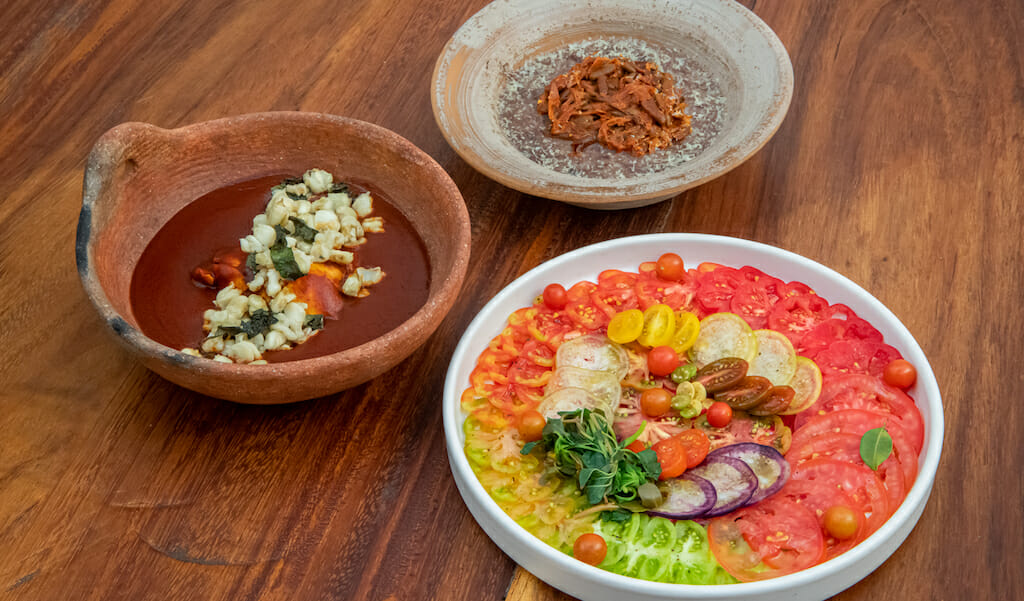 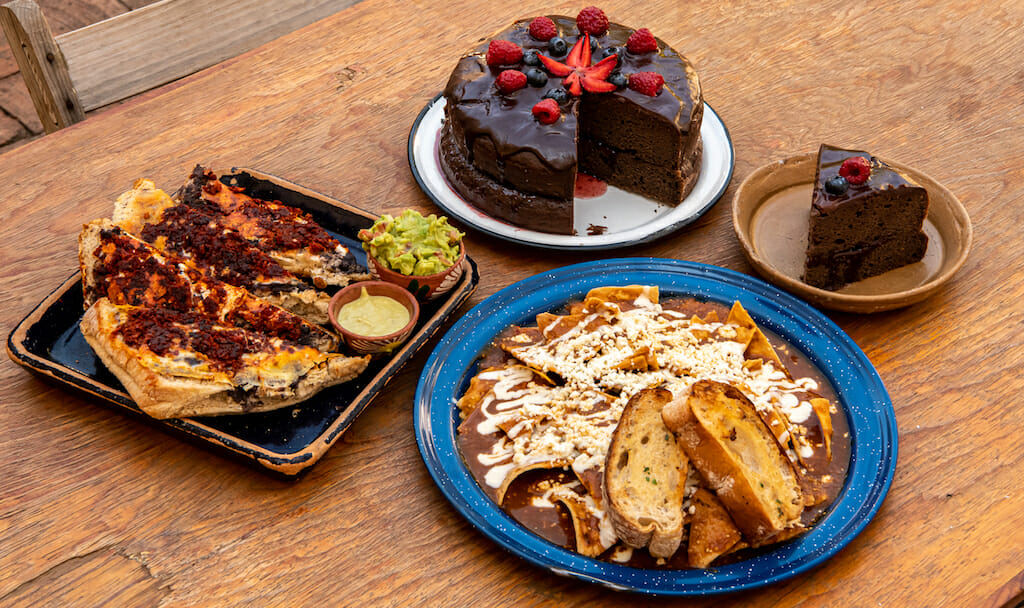 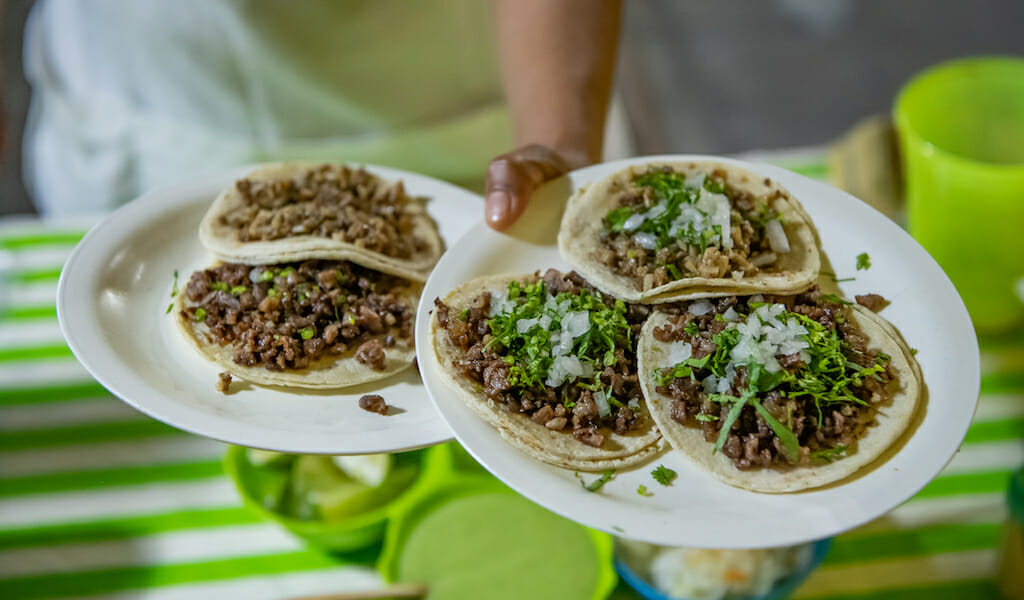