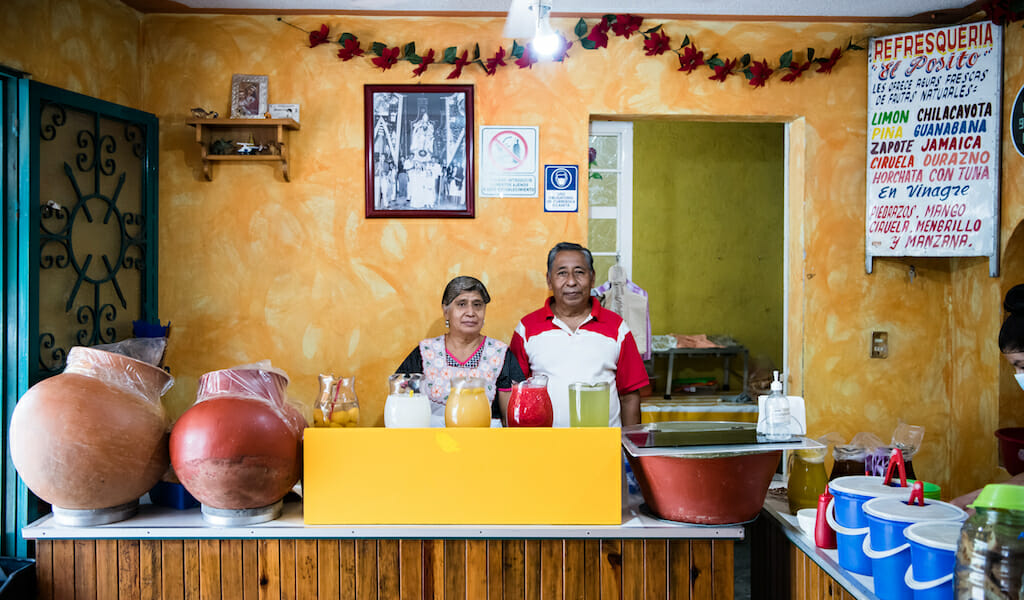 Back in our college days, in the mid 2000s in Mexico City, we spent hours talking with our fellow students about the foods we missed the most from home. When we, the “Oaxacan delegation,” brought up piedrazos, everyone in the room laughed. They could not fathom something with such a name – piedrazo literally means to be hit with a hard stone in Spanish – as being edible. We had no idea that our beloved snack, a true classic in Oaxaca, was totally unfamiliar to the rest of our friends.

A piedrazo is a piece of very, very hard crunchy bread (hence the name) with pickled carrot, onions and potatoes, dunked in a fruit- and chile-based vinegar and dusted with chile powder and – if you’re feeling fancy – quesillo (fresh Oaxacan cheese). Although the concept might sound strange to most people, piedrazos have an undeniable presence in the memories of most Oaxacans. Moreover, the way we decide to eat this playful snack will reveal a lot about ourselves: some like biting the crunchy edges of bread and devouring it before it gets too moist, while others prefer soaking the bread in the vinegar until it is as soft as a muffin. 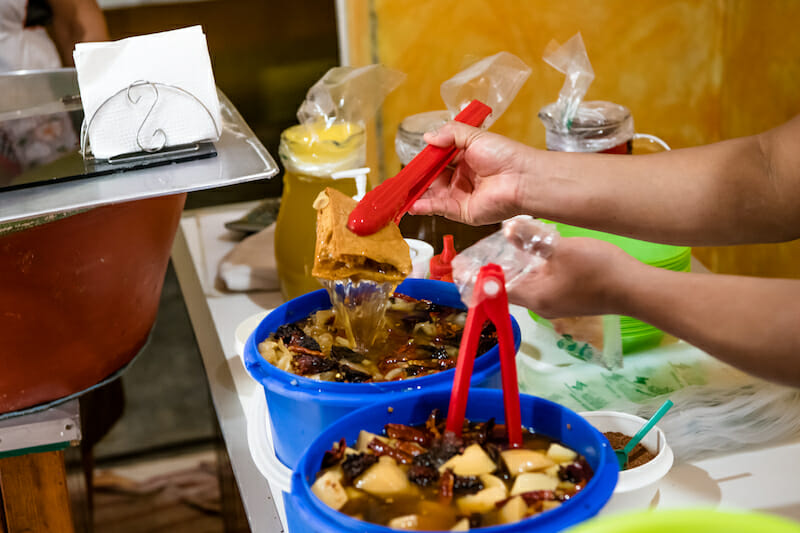 As opposed to many popular Oaxacan dishes, it is hard to trace back the origin of this fermented treat that some hate and most love. “There are many stories about the piedrazo,” reflects Aurelio Flores González, the 66-year-old owner of El Posito, a stall famous for its delicious piedrazos and aguas frescas (fruit-based waters). “It is said they came from necessity, when farmers with little economical resources stored all the bread they could afford. To eat it, they would soften it with the vinegar they made from the vegetables and fruits they didn’t sell.” Though El Posito has been serving piedrazos for the last 55 years, nobody can point out exactly when they became part of the Oaxacan snack diet.

“My grandmother started this business 60 years ago,” Aurelio continues. “She sold aguas frescas in the open-air market that eventually became the Benito Juárez Market building. Eventually, my mother joined, and that’s when they started selling dechichitas, an extinct type of tiny and juicy heirloom oranges, sprinkled with chile powder. Later, by popular demand, my mother incorporated the piedrazos to their offerings. I was a little boy.” 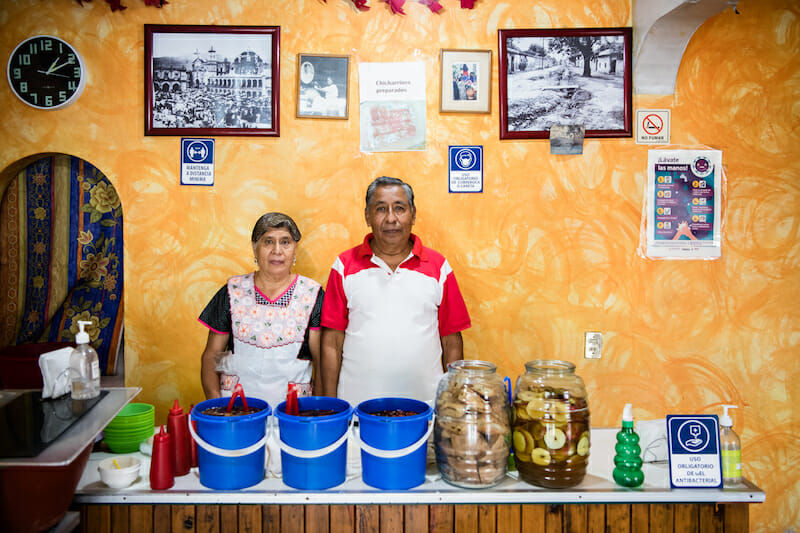 The area where the Benito Juárez Market – a bustling mercado in the heart of what is now downtown Oaxaca – is located was some 100 years ago surrounded by hectares of fields growing all sorts of fruits, beans and vegetables, and that provided most of the produce that fed the city. The families that eventually founded the current neighborhood were farmers who would store and ferment fruits, chiles and vegetables, both for selling and their own consumption; so it wouldn’t be farfetched to assume this place – where El Posito has made its permanent home – is where piedrazos may have originated.

Despite its simple and unusual nature, assessing the quality of piedrazos is just as relevant as tasting and evaluating a good stew or mole. The key behind a good piedrazo lies in its two most important components: the bread and the vinegar. The bread’s hardness should come from being crisp, not because it is dry. “Our piedrazos are made with woodfired bread baked twice: the first time is to cook it, the second for achieving crunchiness,” explains Aurelio. “We don’t want piedrazos made of very dry bread that turns into a sponge, soaking up all the vinegar. The idea behind the piedrazo is first playing with the crunchy coat, and then letting the insides of the bread soak a lot… or a little, depending on how you like it.” 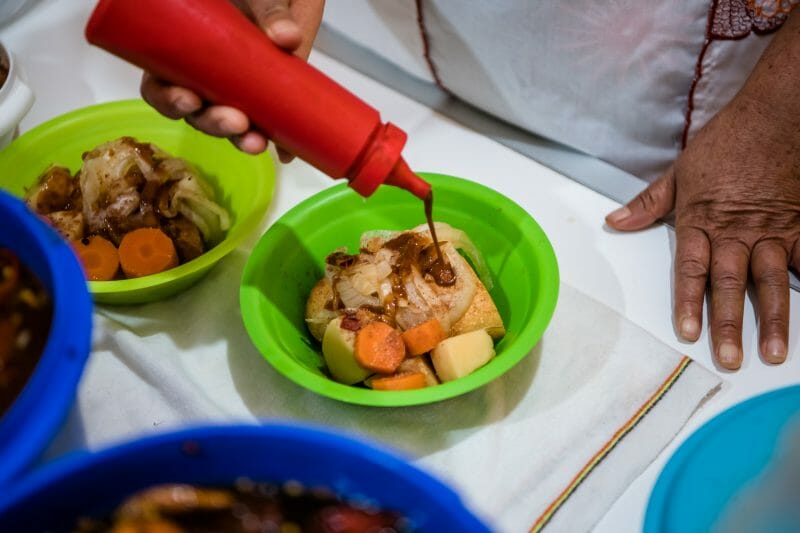 The vinegar, on the other hand, should be both sweet and sour, but not super acidic (like some of the vinegar we find at other vendors’ stalls). “The best vinegar is the homemade one that has been made with fruits, so it is gentle on the stomach, unlike industrial vinegar,” says Aurora Sanchez Torres, Aurelio’s wife. “Our recipe has improved with the years, and we tend to add seasonal fruits as well. But the basic principle is to keep it homemade and healthy.” It was her mother-in-law who taught her the art of making a flavorful and balanced fruit vinegar. Aurora joined the business as a newlywed, when she and Aurelio moved back to Oaxaca after a stint in Mexico City. Aurelio decided to quit his career as an air conditioning technician so they could start their married life in a tranquil environment away from the big city rush and closer to the family business.

“Piedrazos used to be a love-it-or-hate-it treat, but it is more accurate to say it grows on you until you develop a taste for it,” Aurora says.

Currently, Aurora is the guardian of El Posito’s unique vinegar recipe which, frankly, has no rival: There is a velvety sweetness to it that reminds us of kombucha or a very smooth beer with fruity tones. It is a mix of pineapple, apple, fresh pasilla and árbol chiles and the right amount of time, as well as other technical details which, of course, remain a secret. According to Aurora and Aurelio, the piedrazo eating experience is all about using the vinegar to tailor for the texture we are craving. Because of that, the vegetables shouldn’t be too hard or too mushy, but al dente. Chile powder is the little extra kick that we wouldn’t pass over, but that and the quesillo are totally optional ingredients.

Given the low profile of this snack, as a Oaxacan it’s easy to assume it is consumed and enjoyed exclusively by locals. Surprisingly, this is not the case. The spread of new nutritional trends that favor fermented foods and beverages have widened the stage for treats like piedrazos. “Ten years ago, most of our clients were 90% locals. This has changed in the past five years,” Aurora says.  “I would say we now receive 60% locals and 40% international and national visitors. I notice more and more people of all ages and walks of life are developing a taste for vinegar and other pickled fruits we sell, like plums and mangoes. Piedrazos used to be a love-it-or-hate-it treat, but it is more accurate to say it grows on you until you develop a taste for it,” concludes Aurora as she pours a spoonful of vinegar and onions onto our piedrazo plates. 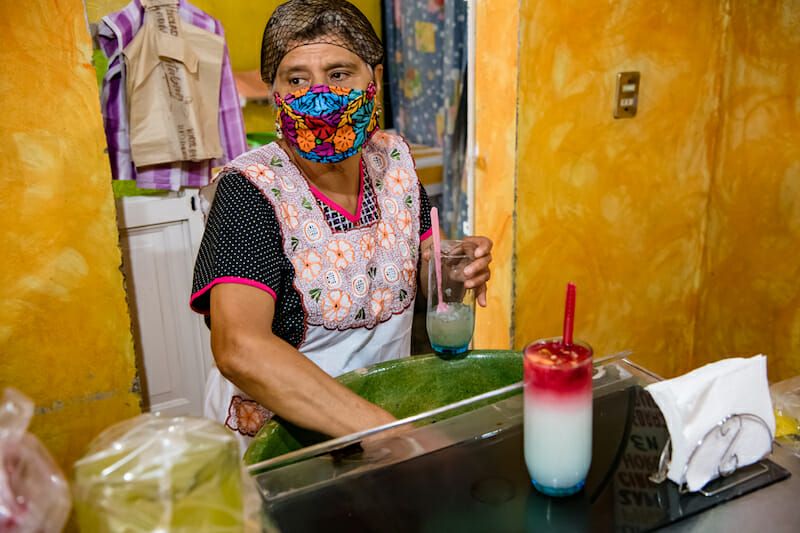 In any case, if eating a piedrazo seems challenging, we can always accompany it with some of El Posito’s aguas frescas to chase down the vinegar. Options range from horchata (rice water), prickly pear, chilacayota (pumpkin with pineapple and brown sugar), guanábana (soursop), breadfruit or any of the seasonal exotic fruits we are lucky to find in Mexico.

To this day, just as we did during our summer holidays when we would travel back home from college, we come to El Posito to get our piedrazo fix. The calm streets surrounding the stall still have a melancholic vibe that takes us to the rural past of this neighborhood. With a couple of piedrazos on our table, we are reminded that Oaxacan food is not always about the grandiosity of its ingredients or the abundance of its fields. It is also about how times of necessity can lead to creative – and truth be told, delicious – solutions. 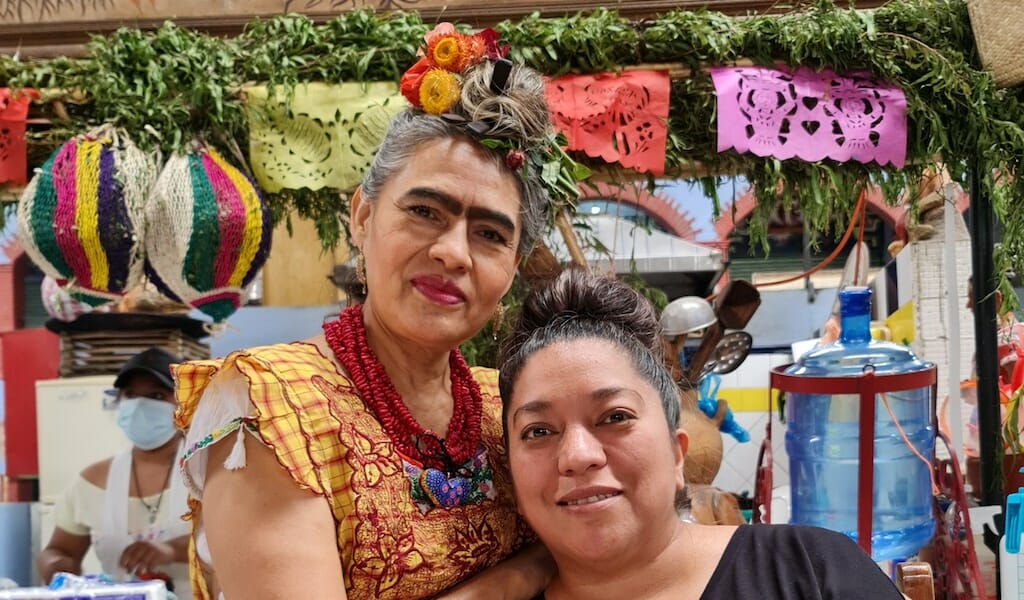 Oaxaca | By Paco de Santiago
By Paco de Santiago
OaxacaOn my way out of Oaxaca center and on to the city of Santa Catarina Minas, a good friend suggested I make a pit stop to visit “Frida.” Me: “Wait! Frida? Frida Kahlo the Mexican art icon? But she died in 1954!” Him: “You'd better go and try her chile encuerado.” So here I am,… 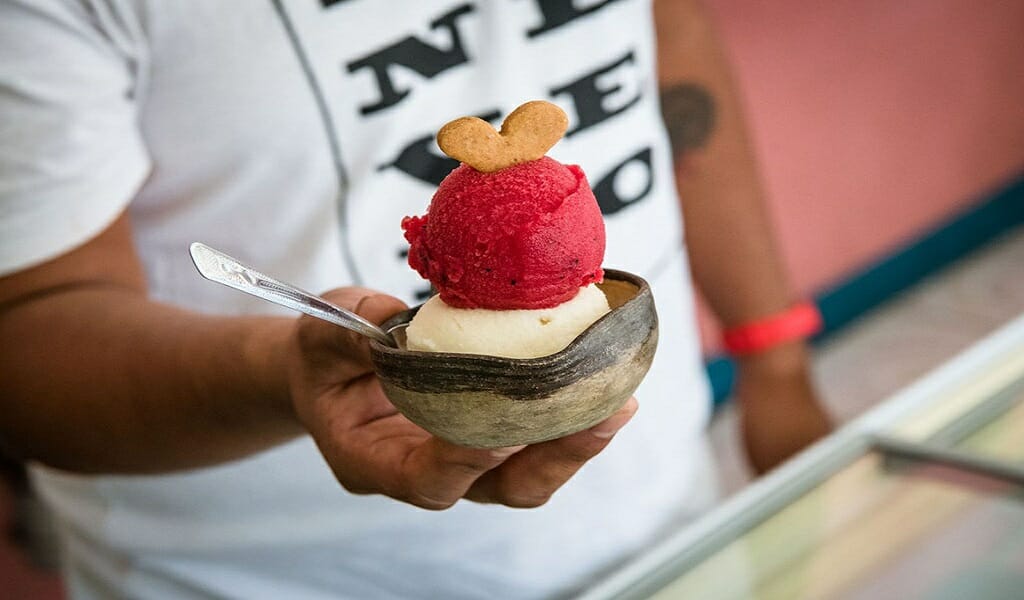 Lazduá: Ices that Warm the Soul

Oaxaca | By María Ítaka
By María Ítaka
OaxacaGathered in the parks of Oaxaca during the early 2000s, groups of high school friends, including our dear Roberto, would herald in the end of another school year and the start of a summer of easy living with refreshing nieves in hand. A cup of icy, colorful nieve marked the beginning of carefree afternoons and… 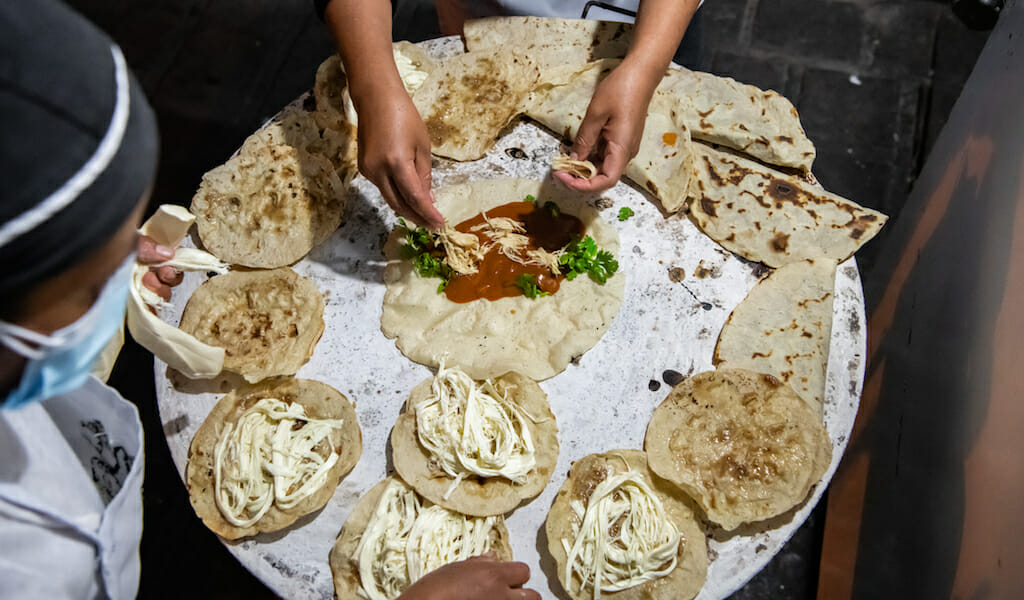