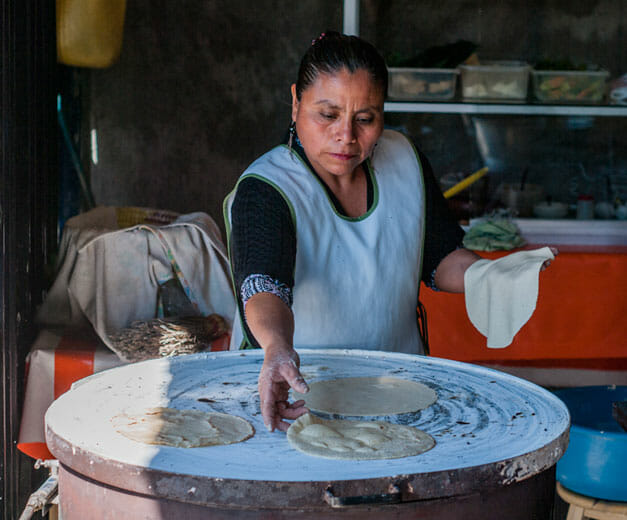 We’ve written previously about the immense diversity of Mexican cooking: Every region has unique traditions that build upon ingredients common to much of the country. And yet there are a few regions that stand out for the variety and vividness of the flavors, colors and tastes found there.<!–more– >We recently had the opportunity to travel to one of the most exciting bastions of Mexican food and culture, the city of Oaxaca, capital of the southwestern state of the same name, located along the Pacific coast.

The city was founded in 1521 by conquistador Hernán Cortés in a valley where Zapotec and Mixtec people had lived for thousands of years. The name Oaxaca came from the Nahuatl word the Aztecs had given this region, Huaxyacac, which means “among huajes” (a tree from the Leucaena family). The city center is an enchanting collection of colonial buildings and cobblestone streets. 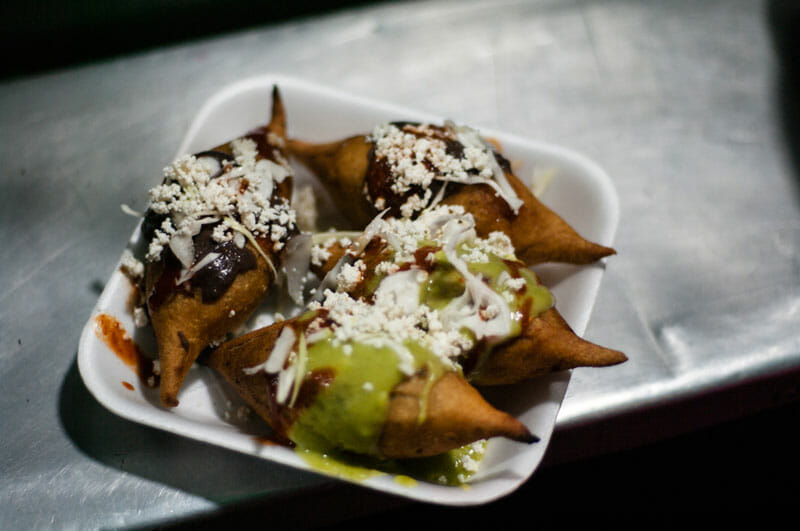 For culinary travelers, of particular interest in Oaxaca are the two downtown markets located just a couple of blocks away from the main square. Mercado Benito Juárez is a typical Mexican market where one can find meat, fruit, vegetables, household goods, mezcal, arts and crafts and a long list of goods for locals and tourists alike. There are a few food vendors at the entrances and inside the market. Our favorite vendor at this market was Aguas Casilda, a booth that sells only aguas frescas. The flavors go from the classic, such as jamaica (hibiscus), tamarind and lime, to more local and seasonal ingredients, such as coconut, pineapple, zapote and chilacayota (types of squashes local to the region).

Though Benito Juárez market is a great place to get a snack and some souvenirs, for a bargain-priced feast we go to 20 de Noviembre, just across the street. This market is also known to locals as the Mercado de carnes asadas because one of the entrance halls is lined with prepared meats ready for grilling that are available by the kilo. There are comedores (restaurants) that grill your selection right in front of you and give you some extras such as tortillas, salsas, grilled vegetables and drinks. The meat selection includes tasajo (thin beef steaks), chorizo and cecina (thin, spiced pork steaks). Inside the market, the combination of colors and aromas is breathtaking. One of the first things that we noticed were the booths that sell bread – bread of every size, from individual pieces to family-size loaves bigger than a small child, all beautifully arranged.

The main culinary attraction of this market, however, is the comedores that serve typical Oaxacan food. Although you can eat very well at any of the stands inside the market, Comedor Chabelita came highly recommended by locals. We started with a Platillo Oaxaqueño, a platter that included a mole negro enchilada, coloradito mole, tasajo, cecina, chorizo and quesillo (Oaxaca string cheese), which was the perfect introduction to the local cuisine. We then ordered a tamal de mole negro con pollo. Wrapped in banana leaves, this was one of the best tamales we’ve had anywhere in the country. Other delicious dishes that Chabelita serves are tlayudas, broths and the typical Oaxacan moles, such as negro, coloradito, amarillo and rojo. 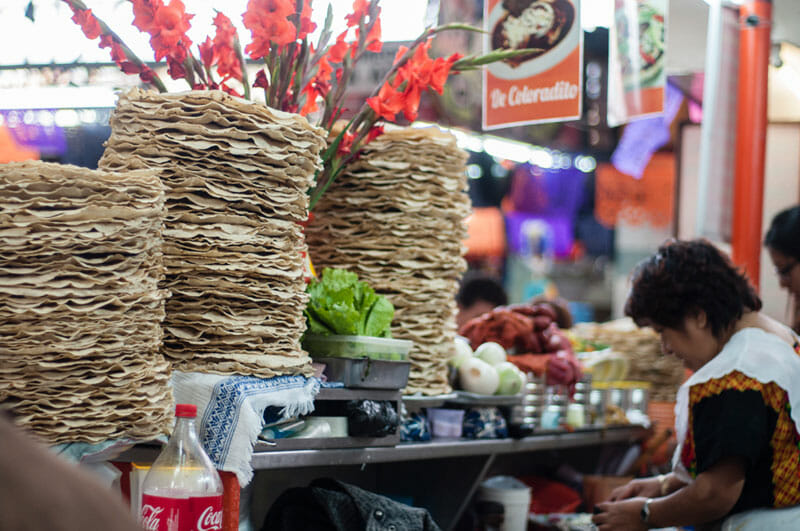 Even before we arrived in Oaxaca people had recommended making a late-night visit to Las Libres street, specifically Cenaduría Tlayudas Libres, to eat the best tlayudas in the city. A tlayuda is a large, white-corn tortilla, about 20 inches in diameter, which has been slightly toasted so it gets crunchy but still remains pliable. Tlayudas are topped with refried beans, quesillo and lettuce and might also have chorizo, tasajo, cecina or grasshoppers added to them. Tlayudas on Las Libres are grilled on the sidewalk over coal, which gives them a spectacular smokiness. These tlayudas are folded in half so that they resemble large quesadillas. 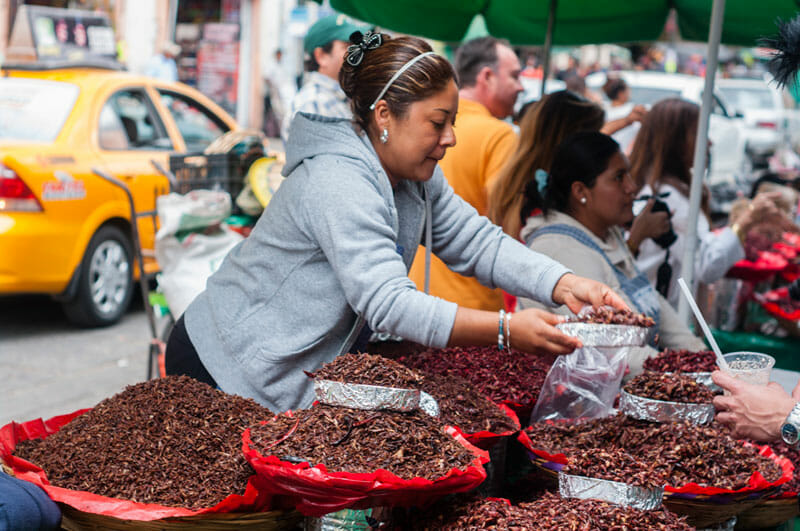 Right outside the downtown mercados we found grasshoppers sold by the kilo. The booths were lined with the insects, separated by size (small, medium, large) and by flavor (natural, spicy, lime, garlic). They can be eaten alone or added to all kinds of dishes, including guacamole, tlayudas and quesadillas. Also available outside the markets were empanadas, large tortillas fried in lard, folded and filled with epazote, a fragrant herb, and chicken cooked in amarillo mole; molotes, square corn pockets filled with chorizo and potatoes and topped with cheese, cream and salsa; tejate, a Oaxacan traditional drink made with corn, mamey pit, peanuts and cacao and served in colorful containers made out of the fruit peel of a local tree; and many other foods and snacks.

We’re only just scratching the surface here; stay tuned for future posts on mezcal as well as iconic restaurants in Oaxaca. 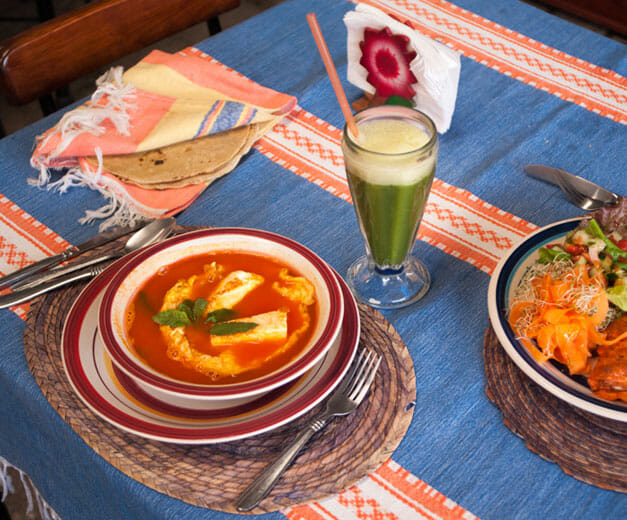 Oaxaca | By Ben Herrera
By Ben Herrera
OaxacaOaxaca has become one of our favorite food destinations in Mexico. A few weeks ago we visited the city again, but this time it wasn’t the moles or the decadent regional food that caught our attention, but an organic market where we had a delicious breakfast one morning. El Pochote (named after a thorny, flowering…

Oaxaca: A Journey Into the Heart & Soul of Mexican Cooking

Trips | By Culinary Backstreets
By Culinary Backstreets
TripsWe like to think of Oaxaca as the heartland of Mexican cooking. All those things that seems so classically and elementally Mexican – corn, chiles, moles, mezcal – can be traced back to the fertile area that surrounds this historic city. This is true about not just ingredients but cooking techniques as well. The use…
Eating Oaxaca