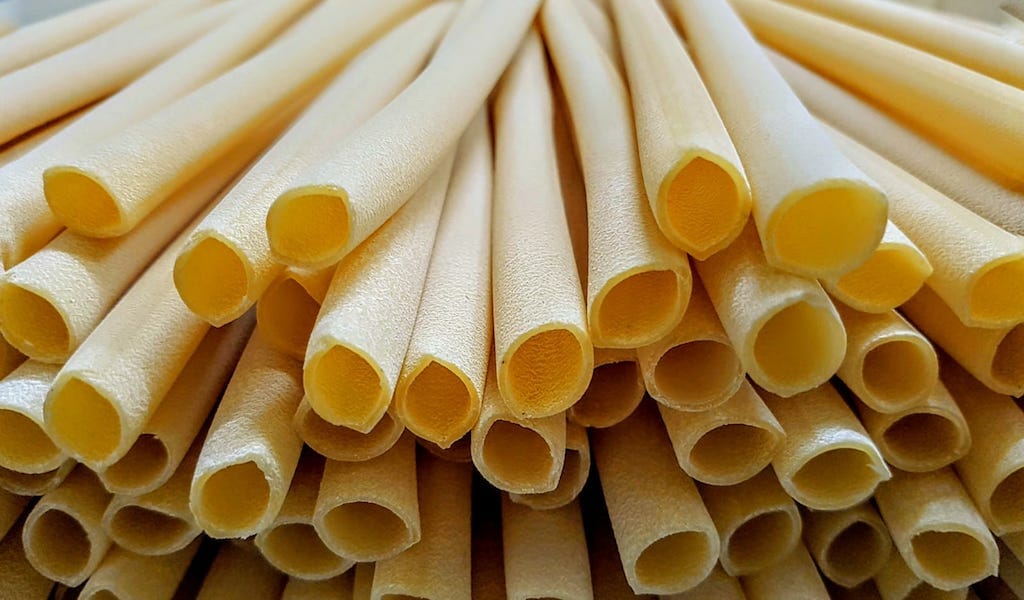 In the history of Neapolitan cuisine, the most important revolution, the one that transformed the culinary habits of people across southern Italy, is certainly the flourishing of dried pasta.

Until the second half of the 17th century, Neapolitans were nicknamed mangiafoglie (leaf-eaters) – the volcanic land surrounding the city was incredibly productive, resulting in a large variety of vegetables that formed the basis of the local diet.

But by the end of the 17th century, the ideal climatic and economic conditions converged in that bend in the sea between Naples and the Sorrento coast, where the towns of Gragnano and Castellammare di Stabia are located, to allow for the rise of dried pasta.

The historic cultivation of durum wheat and semolina in the region, as well as the subsequent expertise of the local flour producers, the pure water of the Vernotico River, the ideal wind, and the birth of a primitive semiautomatic machine – the torchio, or pasta extruder – led to a wealth of pasta. This development radically changed the Neapolitan diet – they stopped being leaf-eaters and became mangiamaccheroni (macaroni-eaters), a love that continues to this day. 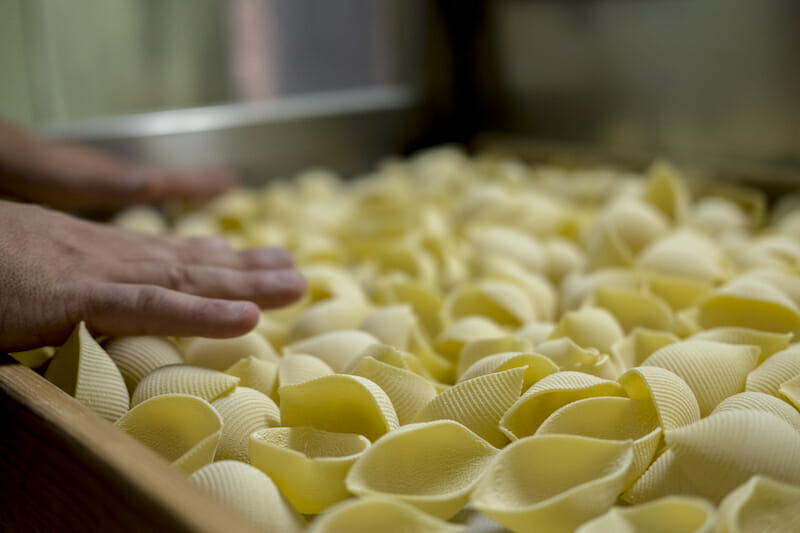 Moreover, Gragnano became the city of dried pasta production. In fact, in the early 19th century, Ferdinand II, King of the Two Sicilies (a region that included Naples), declared Gragnano as the official court supplier of pasta. Today, Gragnano pasta is protected by a strict IGP (Indication of Geographic Protection) protocol. It is also home to one of our favorite pasta makers.

It was in the city’s main square that, in 1907, Gaetano Faella put the expertise he had gained while working in the pasta sector to good use by establishing his own pasta factory, Pastificio Faella. He had the know-how and skills to produce incredible durum wheat semolina pasta. That involved never making any compromises, using only the best Italian durum wheat and Gragnano spring water to create a slow-rising dough, followed by pushing the pasta through an extruder using bronze molds (or dies) and slow drying at a very low temperature (max. 48 degrees C). 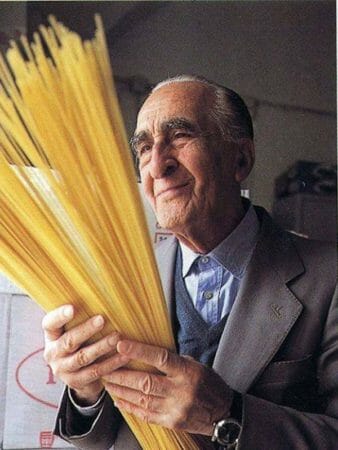 Gaetano passed the company to his son Mario Faella, who was born in 1914 and died in 2012, at the age of 98; he was involved with the business up until the end. Now 53-year-old Sergio Cinque, one of Mario’s grandsons, is overseeing the Faella dynasty.

“And even after the technological, regulatory and health updates,” Sergio tells us, “our pasta is made roughly the same as it was a hundred years ago, including hand wrapping and the use of bronze dies.”

This historic production process “guarantees the right consistency of the pasta,” he adds. “Faella pasta has a rough surface, perfect for better absorbing the sauce, thanks to the extruding that is still done with bronze dies.”

“Faella pasta has a rough surface, perfect for better absorbing the sauce, thanks to the extruding that is still done with bronze dies.”

The company’s most popular pasta shapes are candele and paccheri. Paccheri are large, thick, smooth and cylindrical-shaped. Since the hole reaches four centimeters, it’s the perfect pasta for holding meat or vegetable sauces, and also goes well with seafood. It should surprise no one that candele, which translates as “candles,” are in the shape of candles. But they are broken by hand before being cooked, and are best with tomato ragù or ricotta. 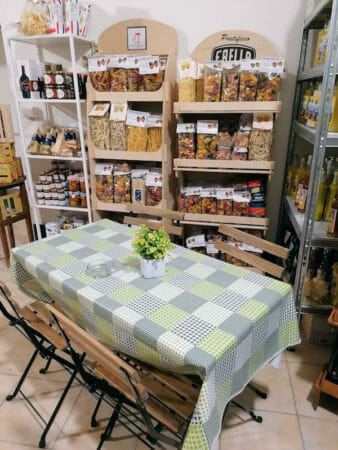 Sergio works with his kids, 24-year-old Ornella and 21-year-old Pierpaolo, and they’re always excited to show customers around the company in Gragnano. But if you don’t have time to trek out to the town, we recommend visiting Eder, a delicatessen in the heart of Spaccanapoli, in the ancient center of Naples. Hidden among the street’s many tourist traps, Eder sells products of exceptional quality and distributes Faella pasta throughout the region.

Owner Salvatore, together with his children Mimmo and Marianna, is very welcoming and eager to chat more about the products they carry. And if you ask nicely to see their warehouse, you’re in for a treat – it’s a stunning space, located in the old stables of the Palazzo Carafa, one of the most beautiful buildings in the city and well-known for its extraordinary door. They’re more than happy to show you around.

After touring the space, there are a wide range on delicious items to choose from, whether Faella pasta, chocolate, tomatoes or wines – goodies from every corner of Campania.

Editor’s note: A bag of Faella paccheri pasta, the ideal vehicle for tomato sauce topped with ricotta cheese, can be found in our Backstreet Naples Box. 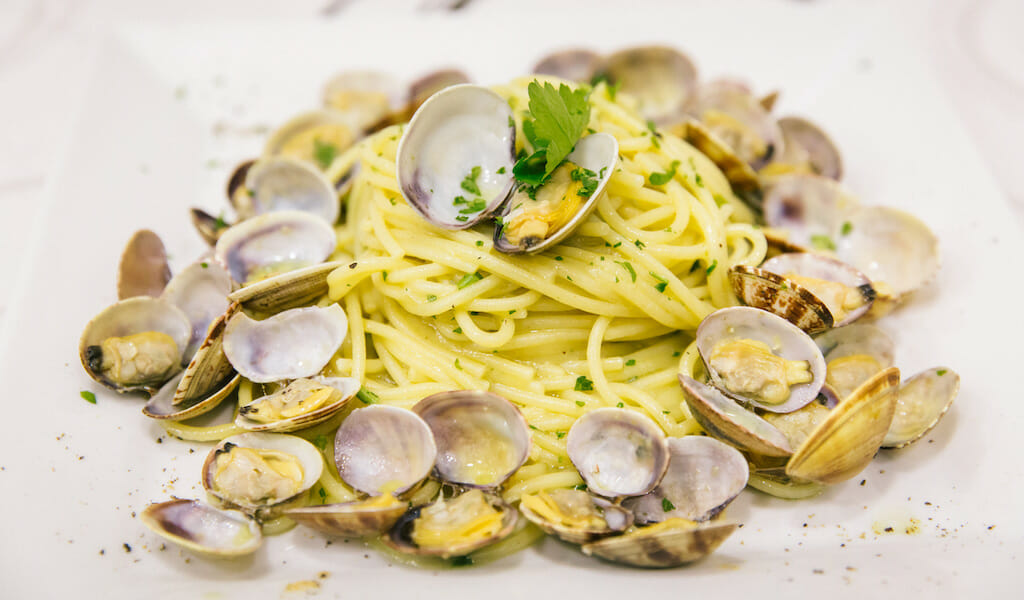 Pantry Guide: How to Eat Pasta Like a Neapolitan

Naples | By Amedeo Colella
By Amedeo Colella
NaplesNeapolitans have a special affinity for pasta. It’s a staple pantry, sure, but also more than that – in Naples, pasta is part of the pervading spirit of the place. Not only do we have great respect for this ingredient, but we also appreciate the minute differences between shapes, differences that would surely be overlooked… 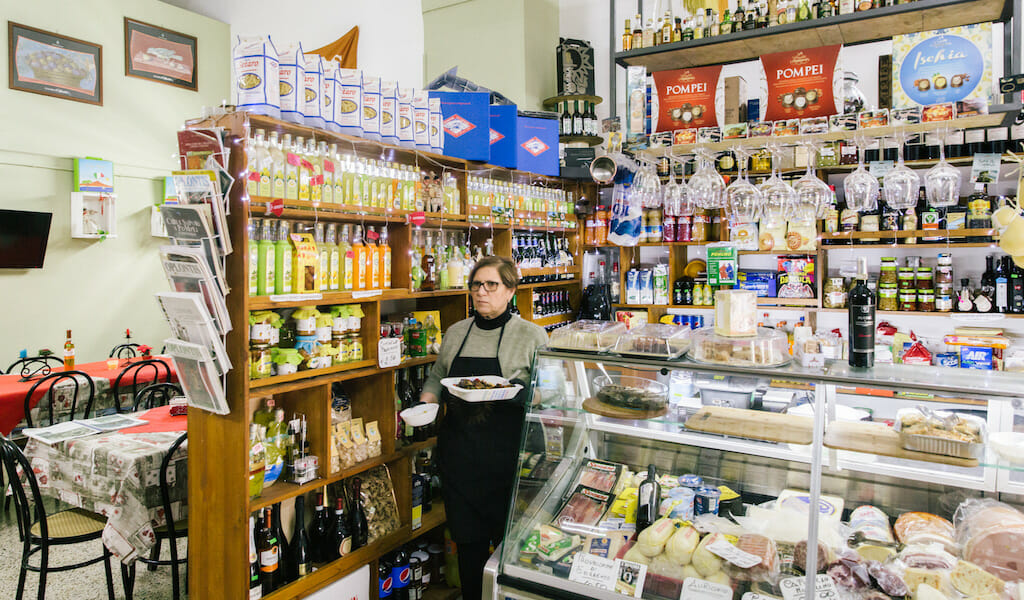 Naples | By Amedeo Colella
By Amedeo Colella
NaplesThe excavations at Oplontis, located in the modern city of Torre Annunziata, are often overlooked in favor of its much larger, much grander neighbor: Pompeii. Yet like all little-known things, this archeological site is full of incredible surprises, like the magnificent villa said to have belonged to Poppaea Sabina, the second wife of the Emperor…

Barcelona | By Paula Mourenza
By Paula Mourenza
BarcelonaBars, cafés, taverns and restaurants have historically functioned as meeting spots for all kinds of urban communities, from intellectuals to politicians and artists –revolutions have even been planned around the table. Nowadays in Barcelona, another community, one that has flourished in numerous cities around the world, has started gathering in these types of venues: cyclists.…
Faella Pasta