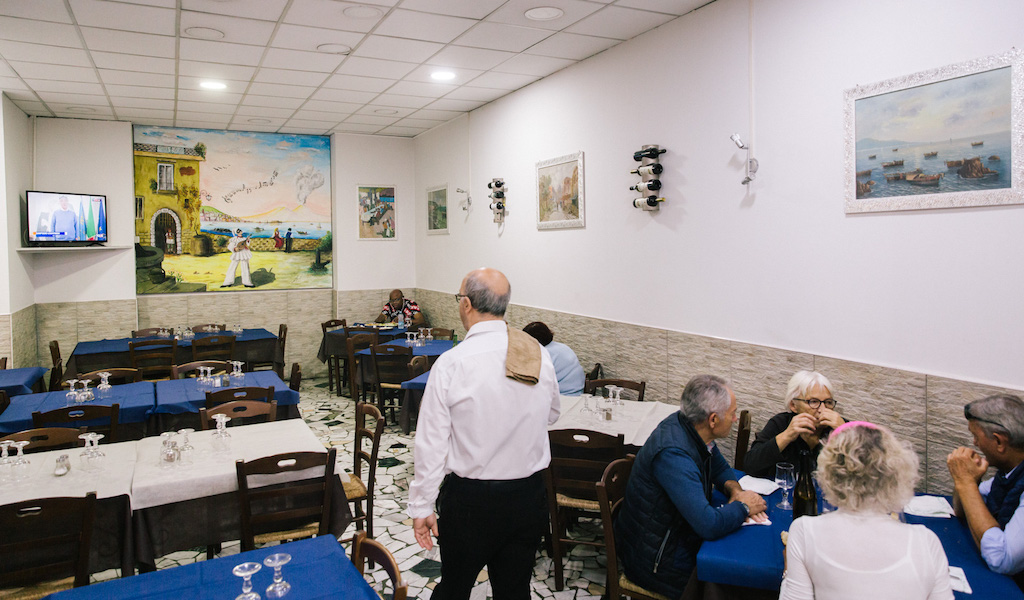 One tip often given to travelers is to look for restaurants full of locals. In fact, we do the same thing when dining out in Naples: If we see a spot packed with groups of employees or policemen on their lunch break, it’s almost a guarantee that we’ll eat well.

Trattoria Avellinese, the late Peppino (Giuseppe) Cipriano’s restaurant near the central train station, is one place that’s always crowded with Neapolitans. Moreover, we can personally testify that this trattoria is a local favorite. Growing up, we lived near Piazza Garibaldi, and whenever our family went out for lunch – which, to tell the truth, wasn’t that often – we went to Peppino’s place.

Peppino hailed from Avellino, a city east of Naples (hence his nickname, Avellinese). Nestled in the Apennine Mountains, Avellino is known for its gastronomy of the land – a simple and tasty meat-based cuisine that is very much linked to local products. 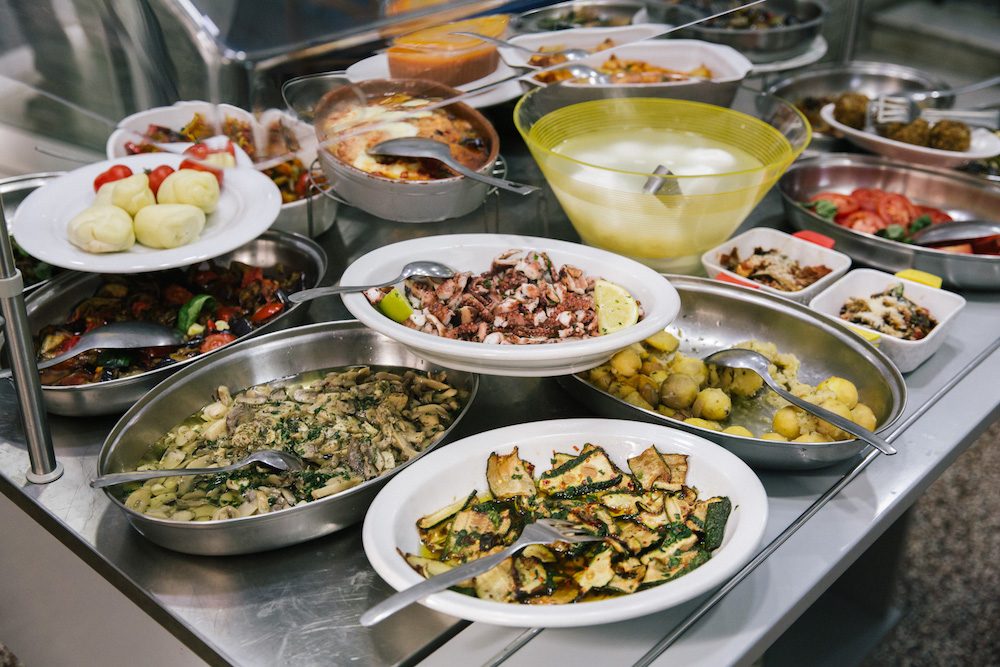 And our Peppino, when he came to Naples in 1928, built his Neapolitan trattoria around Avellino’s cuisine. “The desire to showcase the simple delights of gastronomy was the inspiring principle of our father. Almost a hundred years after its founding, we continue to keep the trattoria’s mission intact,” says 55-year-old Carmela, Peppino’s daughter who, since the 1980s, has run the restaurant with her two siblings, Cipriano, 56, and Tina, 52.

“We serve fried anchovies instead of lobster, meatballs instead of English roast beef,” Tina adds, “paired with one of our simple and genuine side dishes.”

In fact, a large bank of side dishes welcomes us at the entrance. These plates offer a lesson in the gastronomic richness of southern Italian cuisine: There are salads and many dishes featuring vegetables like eggplants and peppers. It’s no surprise Neapolitans were dubbed “leaf-eaters” (mangiafoglia) for years.

“The desire to showcase the simple delights of gastronomy was the inspiring principle of our father.”

The interior is simple, maybe overly so. The television is permanently on, and while we’d prefer it off, we recognize that it’s useful for local employees who want to catch up on the news during their lunch break.

One wall is covered with an ugly fresco of Pulcinella, a famous character in Neapolitan puppetry. In short, the layout really needs to be redone – it’s everything a design architect would advise against. But that likely means an interior designer was never hired in the first place, which we admit makes us happy; this is not a restaurant concerned with appearances.

The meat-filled menu offers many of specialties from Naples and Avellino, including ragù, Genovese sauce, eggplant parmigiana and grilled meat. Everything is basic and very cheap. 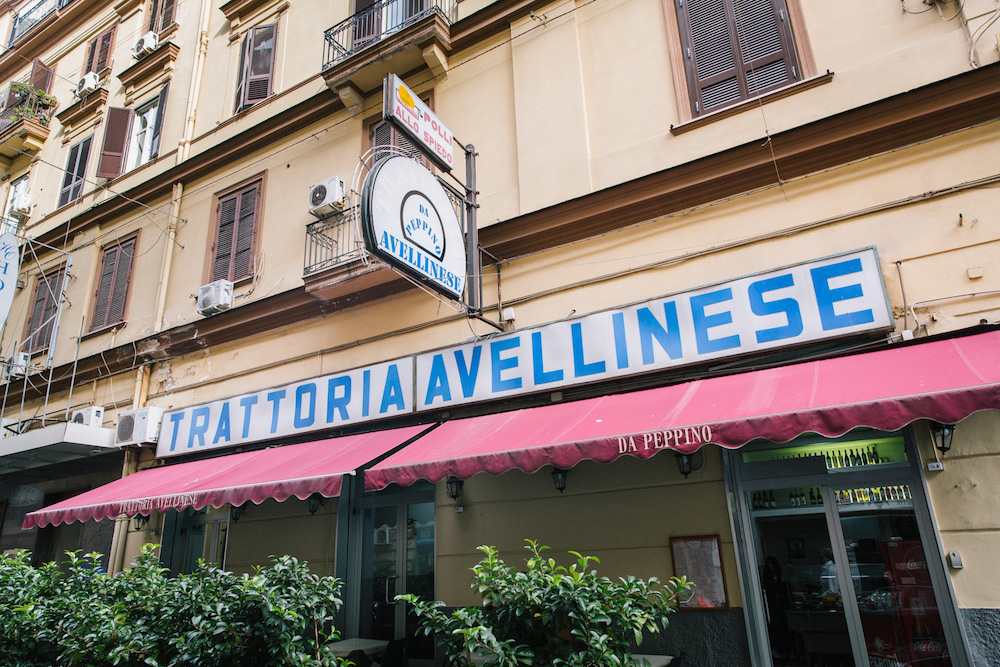 “The symbolic dish of the restaurant, however, is the fusilli all’avellinese [a baked pasta dish], handmade and layered with eggplant and mozzarella,” Tina tells us proudly.

At the table next to ours, a group of Spaniards asks for the lasagna. In Naples, lasagna is a must-try. “Here the lasagna is the real one, the old one, the so-called Bourbon, made with broad pasta, meatballs, boiled eggs, ricotta, and meat sauce,” Tina tells us. The Neapolitan version omits the béchamel sauce that’s found in lasagnas from other parts of Italy.

“We’ve had clients for decades, people who come here for lunch rather than having their midday meal at home,” says Carmela. “But despite all the employees at lunch, the evening is even more crowded, with both locals and tourists.”

The area around the train station is full of restaurants with touts outside inviting (sometimes hassling) you to enter. Not at Trattoria Avellinese, though. Here they wait for you to come in, treating you like guests eating at their home.

Naples | By Amedeo Colella
By Amedeo Colella
Naples -- The rustic Neapolitan tarallo, made of  'nzogna (lard), pepper and toasted almonds, is a true delicacy. It can be considered the first popular snack in Naples, a bite that combines the punch of black pepper with the sweetness of almonds, the whole united by lard. It’s a dangerous combination for the waistline, that’s for sure.… 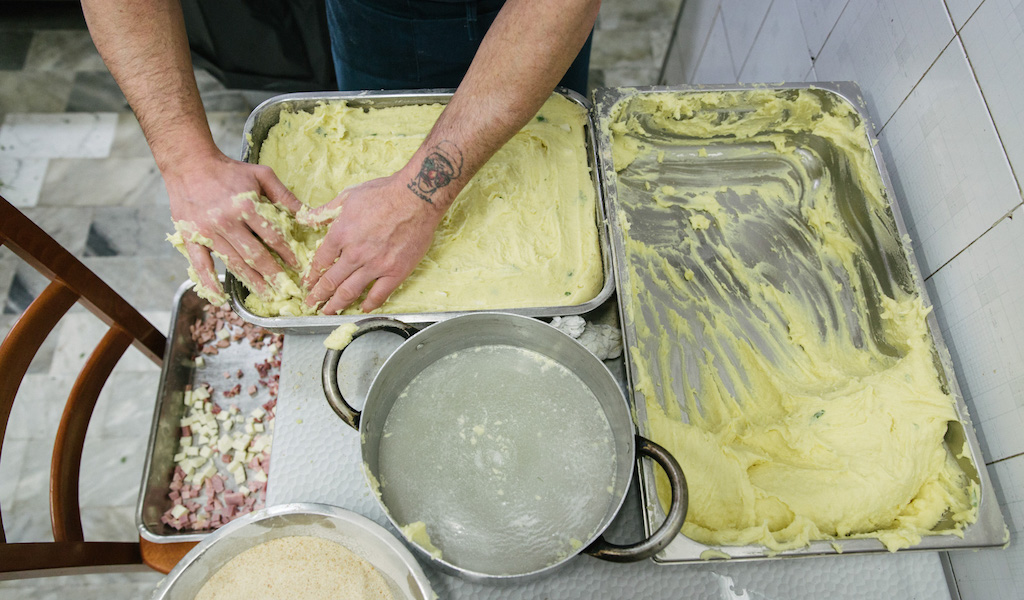 Naples | By Amedeo Colella
By Amedeo Colella
Naples -- Neapolitan cuisine is an impure thing, the result of culinary influences from every part of the old continent. One of the most famous dishes this cross-pollination has produced is the Neapolitan potato gattò, a potato tortino rustico (a tall, square cake) with layers made of mozzarella, scamorza, ham, salami and more. A baroque…
Trattoria Avellinese
Via Silvio Spaventa, 27
Tel. +39 081 658 1943
Hours: 11am-midnight