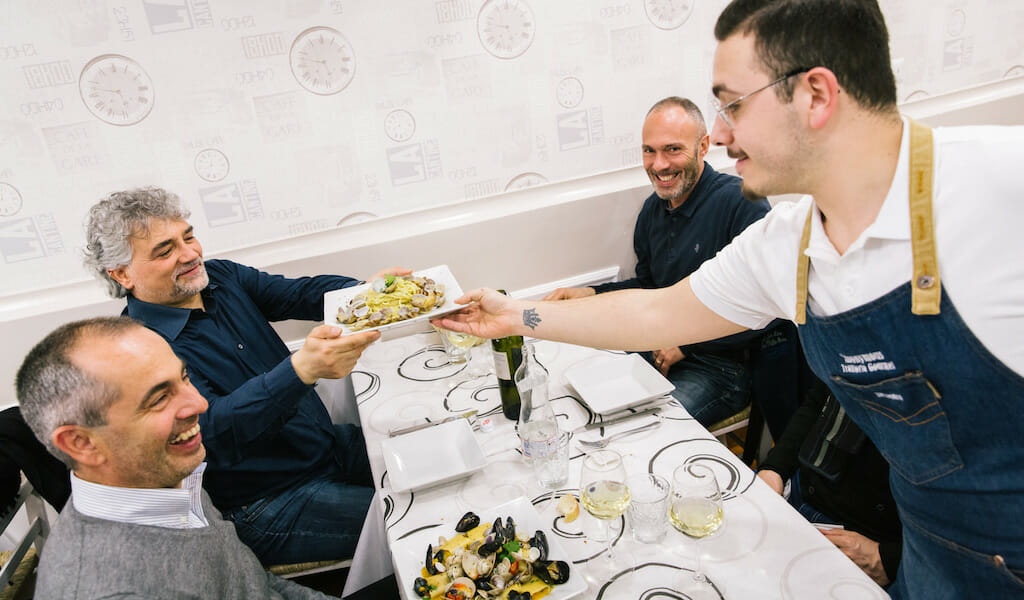 Rua Catalana is a very ancient road, a corner of Naples where time seems to stand still. Located next to the financial district and now squeezed by 19th-century buildings, it is curiously the only road in the city that, instead of the Italian “Via,” uses “Rua,” a distortion of the French “Rue.”

In the mid-14th century, Queen Joanna I of Naples welcomed merchants from all over Europe to the city as part of her efforts to promote trade. She donated this area to the Catalans, and tinsmiths and junk dealers settled here. Even though 700 years have passed, a smattering of small copper and tin artisans continue to practice their craft on this street, now making artistic copper and tin objects for the increasing number of tourists roaming the city.

Last year, in this peaceful oasis (broken only by the hammering of tinsmiths), two young partners, Anna Silvestro and Raffaele Alessio, decided to open a traditional Neapolitan trattoria. With only 10 tables and 40 seats (an upper room was added later), the small spot would focus on traditional dishes that have mostly disappeared from Neapolitan trattorias, from minestra maritata (wedding soup, a happy marriage of vegetables and meat) to a soup of soffritto (a strong sauce made of tomatoes, peppers and meat), from tripe in red sauce to the very simple garlic and oil spaghetti. 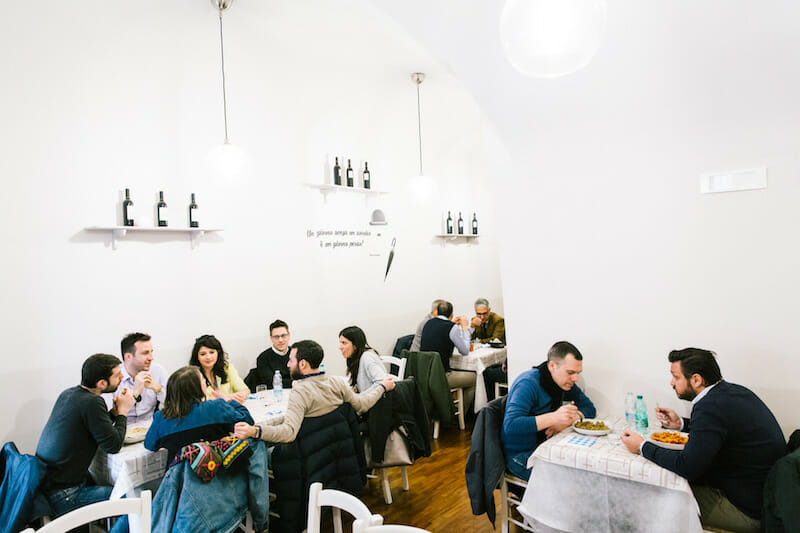 Although tempted by this traditional dish, we opted for the spaghetti alla carbonara; a volcano of spaghetti stuffed with eggs and bacon was quickly placed before us. The city of Rome claims spaghetti alla carbonara as its own. As the story goes, this extraordinary dish is linked to the post-war period, when American liberators introduced bacon to the city, which was then combined with eggs to season Italian pasta – a happy contamination.

But many 19th-century Neapolitan cookbooks mention a pasta dish seasoned with eggs and ham, and it was apparently beloved by the city’s carbonari (coal workers), hence the name “carbonara.” Whatever the origins of the dish, Roman or Neapolitan, the fact remains that spaghetti alla carbonara is unique. And, as Antonio Esposito, a 45-year-old employee at the Ministry of Finance, told us, “Rome must remove its hat in front of Anonymous Trattoria’s carbonara.”

The small spot would focus on traditional dishes that have mostly disappeared from Neapolitan trattorias.

This mix of quality and tradition, as well as the affordable prices, are what make Anonymous so successful. But Anna (who goes by “Aunt Anna”) and Raffaele didn’t make this magic out of thin air: it’s the result of their many years of experience. Having spent her whole life in the restaurant business, Anna coordinates the dining room, while Raffaele, who earned his cooking chops in a variety of popular restaurants in Naples, prepares true Neapolitan gastronomy in the kitchen.

The duo decided to open their own spot in early 2018. With no name for their restaurant, they temporarily called it Anonymous – but the name has stuck. Their success was immediate: employees of the Polizia di Stato (State Police), whose headquarters is located right next door, began to come here for lunch; then the university employees arrived, followed by those from the nearby Ministry of Finance office.

This led to an explosion of online reviews, all of which were positive. The two partners remember one Friday night in May 2018 when it hit home just how popular they had become. “People were waiting on the stairs in front of the restaurant, and we managed to serve almost 200 meals, despite having only 40 seats,” Anna told us. 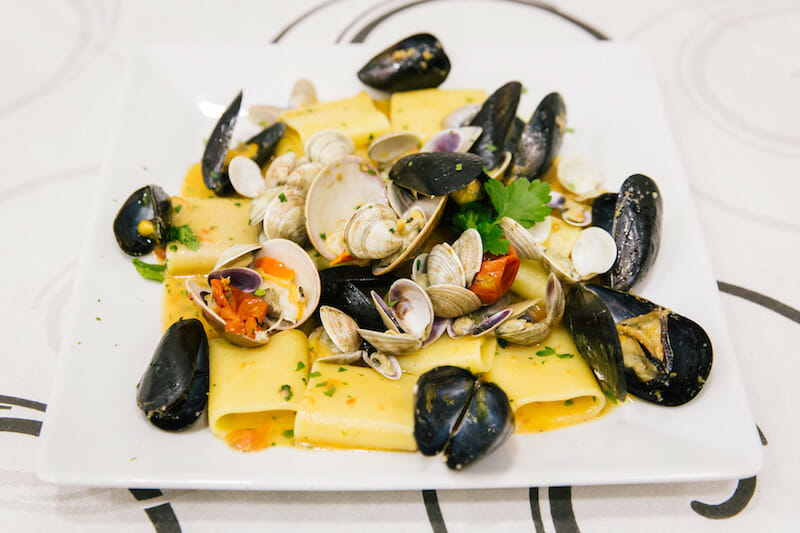 We were speaking to Aunt Anna at the till. Curious about the origin of this nickname, we asked her where it came from. Does she have numerous nieces and nephews? She laughed, saying that she doesn’t – it’s just a term of endearment. “Even yesterday an American woman called me ‘Aunt Anna,’ only she was almost 80 years old and I’m only 43,” she said smiling.

Meanwhile, traditional dishes continued to pass in front of us. Raffaele entered the room with a fantastic bean soup, one of the most ancient and simple dishes of Neapolitan cuisine.

While we had the chance, we asked Raffaele which dish is most popular nowadays. “Paccheri alla bufalina [with buffalo mozzarella] and paccheri with seafood. Basically, paccheri are flying out of the kitchen,” he responded. Pacchero is a regional type of pasta shaped like a giant macaroni, which makes it a good base for sauces. But “pacchero” in the Neapolitan language is also a slap given at full speed. That’s why he told us, “My paccheri don’t hurt – they satisfy the palate and the belly.” Given their popularity, he must be right! 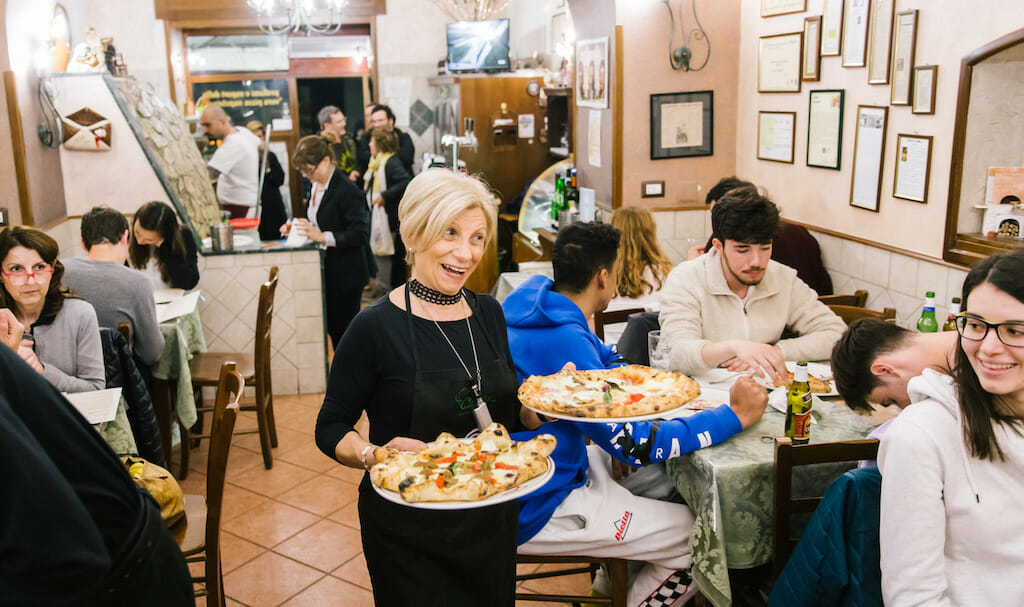 Mexico City | By Lydia Carey
By Lydia Carey
Mexico CityAlex Montes and his business partner, Askari Mateos, have spent years fussing over their recipes for tlayudas: large, thin corn tortillas topped with various ingredients. So what is the secret to a great tlayuda? Montes thinks for a moment. “The asiento [the unrefined pork lard that covers the tortilla],” he finally says, “and the beans,…
Anonymous Trattoria Gourmet
Rua Catalana, 117, Naples
Tel. +39 081 552 8215
Hours: Mon., Weds.-Sat. noon-3:30pm and 7pm-midnight; Sun. noon-3:30pm