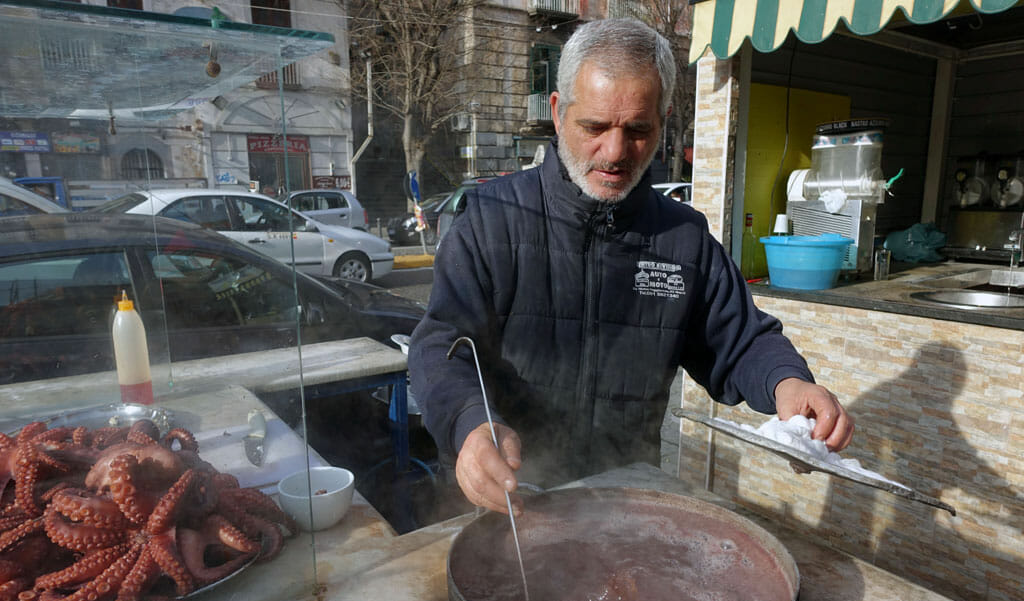 To make excellent octopus broth, you must first fill a huge pot with water to the brim – at least 20 liters – bring it to a boil, add salt and pepper in industrial quantities and immerse four large octopuses. After 33 minutes (and not one more) of simmering, it’s ready: the octopus has reached the perfect consistency.

Yet in Naples there’s a saying, “The octopus cooks in its own water” – a proverb that means that a person needs to get to the truth on his own and in his own time. Lello tells us that what this saying is referring to isn’t actually true, since clearly, an octopus needs much more water than what it comes with to actually cook.

Lello is the last seller of octopus soup, the tea of ​​ Neapolitans – it’s a hot drink that tastes of the sea, as the water is flavored by the long boiling of the king of cephalopods. It’s been a beloved winter street delight for generations.

A cup of broro ‘e purpo (octopus broth), boiling and steaming on cold evenings in the centro antico, was once the restorative for chilled and shivering wayfarers. The octopus soup kiosks were mainly concentrated around Porta Capuana; Lello’s kiosk is not far away, at Via Foria, a few meters from the Teatro San Ferdinando.

Lello’s “shop” is very simple: on one side sits the vat where the octopus broth simmers away, a tentacle occasionally rising to the surface of the rust-colored waters. On the other side, there’s another pot where he sterilizes the white ceramic mugs he uses to serve the soup. On the counter rest ten or so large boiled octopus – bright, veraci (meaning “true,” indicating those of better quality), with two rows of suckers on each tentacle and a faint color ranging from white to pink.

(When we were growing up, our mother, when cooking octopus at home, would put a couple of corks in the cooking water. She had been told that the corks would make the octopus more tender. And this was confirmed by all the corks she saw floating in the pots of brodo vendors. In reality, those corks weren’t used to soften octopuses but to make it easier to locate and retrieve the mollusks from the steaming-hot, murky crimson liquid, for they were connected to them by string.) 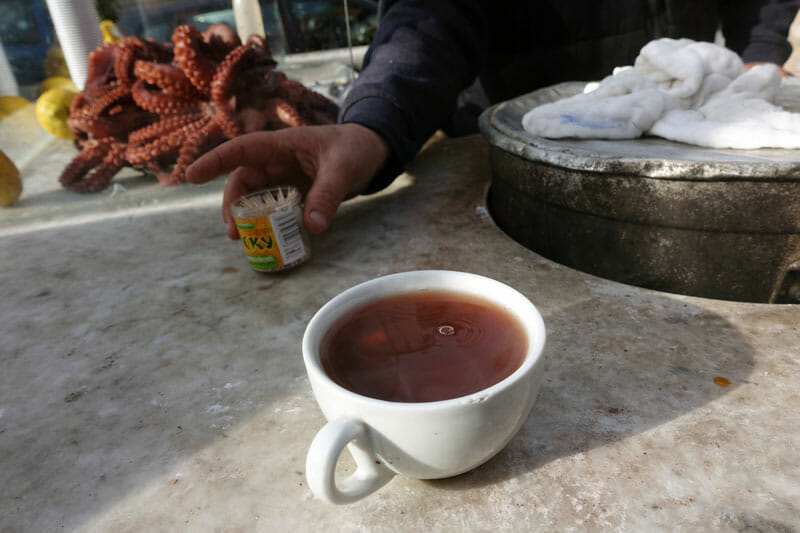 A taste costs €2. Lello takes the big octopus from the pot, puts it on the counter and slices off a nice ranfa (tentacle). He then slices that up into bite-sized pieces, which he places in a mug. Then he fills the mug with steaming broth. The well-peppered broth has a unique, delicious flavor – it’s hard to believe that it comes just from boiling octopus in water. The price of that taste includes another helping of broth, by request, but not more tentacle.

In winter, Lello sells only octopus soup and nothing else. In late March, when spring has arrived, he closes up shop – as far as the octopus is concerned – reopening the following October. The broth is available only in fall and winter. In summer, Lello sells wonderful lemon and orange drinks of his own invention – good reasons to return to the kiosk in the summer heat.