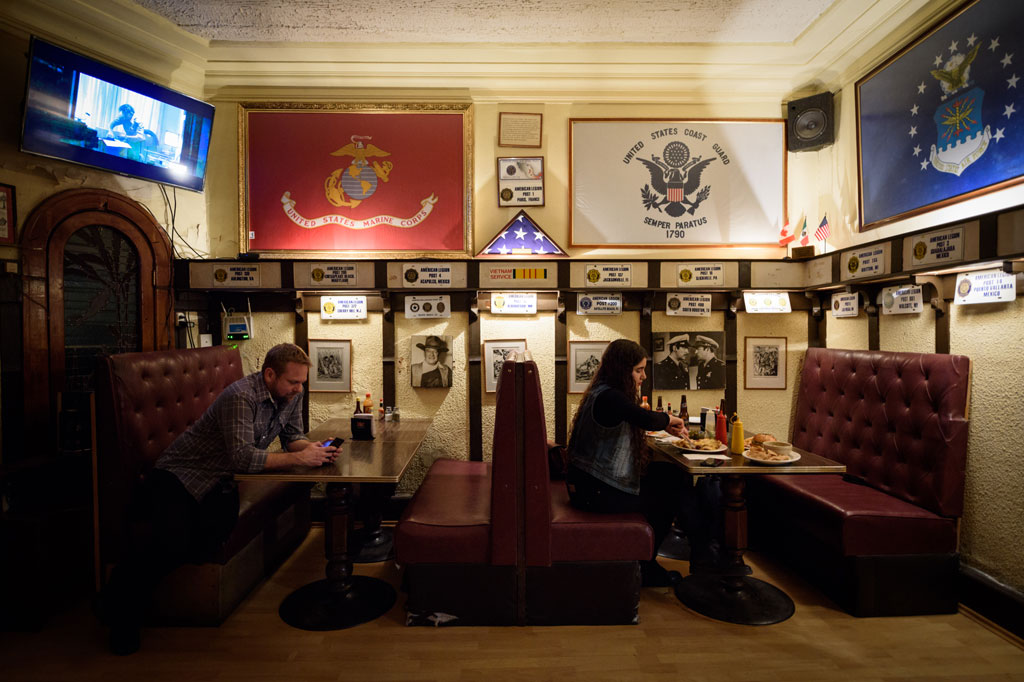 For the most part, hamburgers in Mexico City disappoint. The accepted bread-to-beef ratio is shameful, with slender slices of overcooked meat hiding somewhere within the pillowy fluff of too much bread. The stringy, flavorless beef underwhelms. Even worse are the fancy sandwiches one finds at upscale burger joints, where blue cheese and spinach and a dozen other inappropriate ingredients only momentarily distract from the aforementioned defects of bad meat and a surfeit of bread.

Against this dim backdrop of underachievement, the hamburgers at the Legión Americana shine like stars. This is something of a surprise considering the no-frills, dive bar atmosphere here. The Legión smells dank and looks dark, the residue of a thousand spilled beers seeping into the hardwood floors, as well as that of weekly dance parties where sweaty masses gyrate for hours on end to all manner of pop music in Spanish and English. The Legión also hosts the best dedicated hip-hop dance night in DF.

The walls and ceilings of the Legión further intrigue with echoes of the bar’s history. One of the dining rooms boasts an opulent chandelier, surrounded by burgundy walls highlighted with gold-trimmed molding. This room stands as primary evidence for those who claim that the building was once a brothel.

The other dining rooms speak to the bar’s more recent history as home to the American Legion, a private club for expatriate US veterans. The names and insignias of military units hang on banners that decorate the walls. A chapter of the American Legion has existed in Mexico City since 1920, with the Calle Celaya location serving as its hub since 1968. And while a younger ownership group took over the bar in 2013, opening it to the public, the old veterans still gather every Tuesday at the Legión to sing karaoke versions of Sinatra tunes. 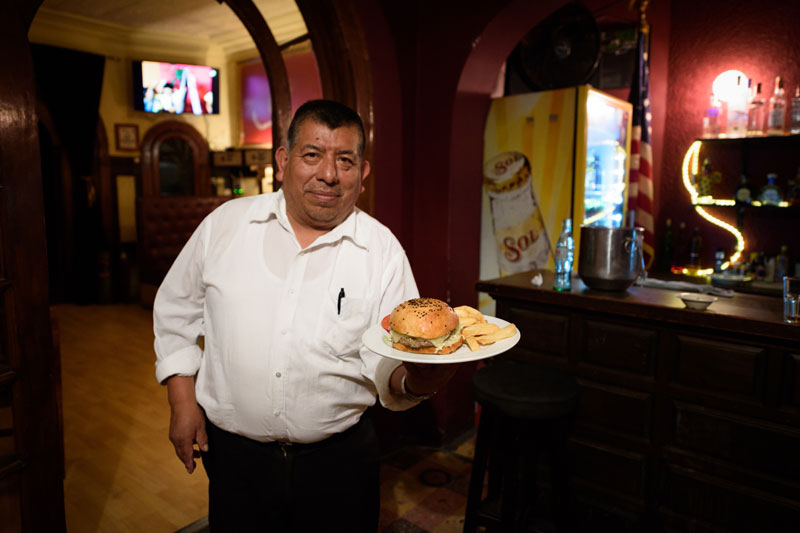 In part due to the hamburgers it serves, the Legión is quickly becoming a trendy spot for a hip, young crowd that thinks drinking, dancing and downing beef sounds like a fun night out. The bar enjoys a healthy mix of customers, with as many Mexicans as expats patronizing the Legión. This is by design, according to Grant Badger, one of the bar’s current owners. “We could’ve gotten bigger faster if we’d advertised in hostels for Americans,” he said. “But we wanted this to be a place for everyone, with as much Spanish spoken as English.”

The Legión is quickly becoming a trendy spot for a hip, young crowd that thinks drinking, dancing and downing beef sounds like a fun night out.

When Badger and his three partners, another US expat and two Mexican nationals, took over the Legión four years ago, they set upon revitalizing the bar’s menu. Although the Legión had long served burgers, Badger thought they could do better. “I didn’t know I had ketchup pride until I moved to Mexico,” he said. “I won’t use Belmonte. It has to be Heinz.”

Besides upgrading the condiments, Badger also insisted that the bar serve burgers with real cheddar cheese and, most importantly, unadulterated patties. “We’re trying to do a very American preparation,” Badger said, comparing the Legión’s burger to lesser sandwiches one finds in Mexico City with vegetables and even bread mixed into their patties. “It’s a solid beef burger.” Moreover, the Legión’s beef patties weigh in at a hefty 200 grams apiece, almost double the size of the emaciated patties found in most Mexico City burgers. 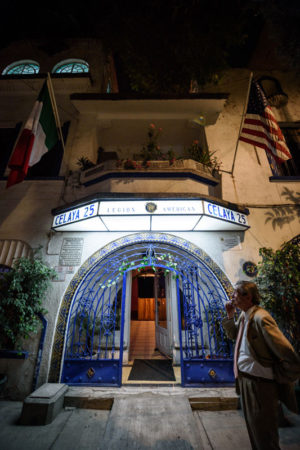 The most indulgent of the sandwiches served by the bar is the Legion Burger, an intimidating tower of food that gives one heartburn simply for looking upon it. Between two lightly grilled buns, the Legion Burger packs two full-sized beef patties, freshly fried bacon, grilled ham, gooey American cheese, crisp iceberg lettuce, thick slices of sweet tomato and dark brown onion rings. The burger stands so tall that one must hyperextend one’s jaw to fit a bite into one’s mouth. Eating the burger literally hurts you.

Nevertheless, the flavor of the Legion Burger more than compensates for whatever pain it inflicts, mandibular or coronary. The salty ham and bacon balance the otherwise overwhelming savoriness of so much beef, while the tomato and lettuce lend the burger cooling moisture. And the Heinz ketchup justifies Badger’s pride – it completes the holy trifecta of sweet, salty and savory that is the hallmark of American comfort food. Each bite leaves bits of cheese and bacon lodged in one’s teeth. The burger comes with a side of thick-cut french fries, but good luck finishing them. 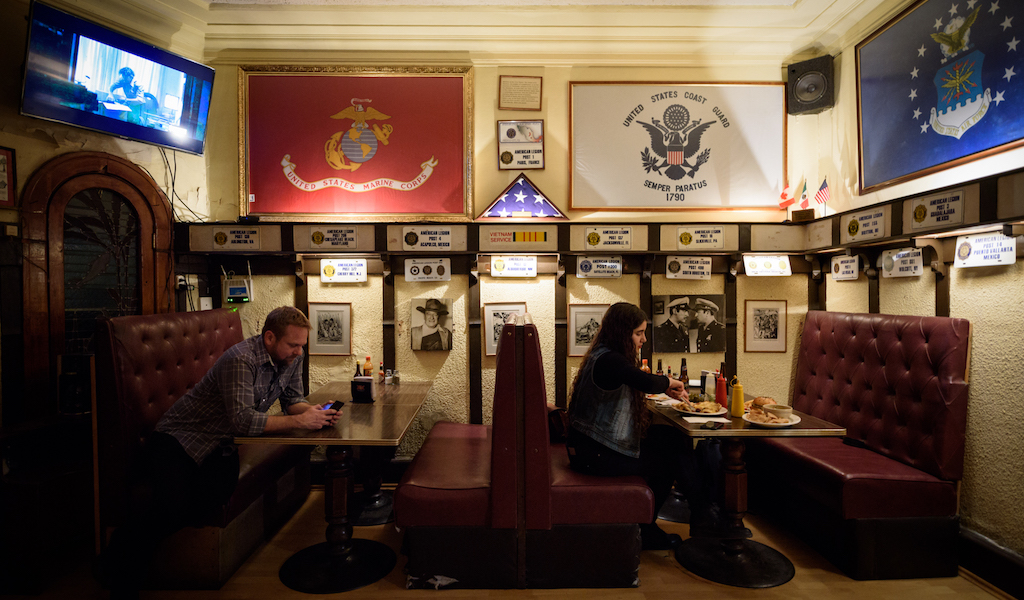 Mexico City | By J. Alejandro
By J. Alejandro
Mexico CityFor the most part, hamburgers in Mexico City disappoint. The accepted bread-to-beef ratio is shameful, with slender slices of overcooked meat hiding somewhere within the pillowy fluff of too much bread. The stringy, flavorless beef underwhelms. Even worse are the fancy sandwiches one finds at upscale burger joints, where blue cheese and spinach and a… 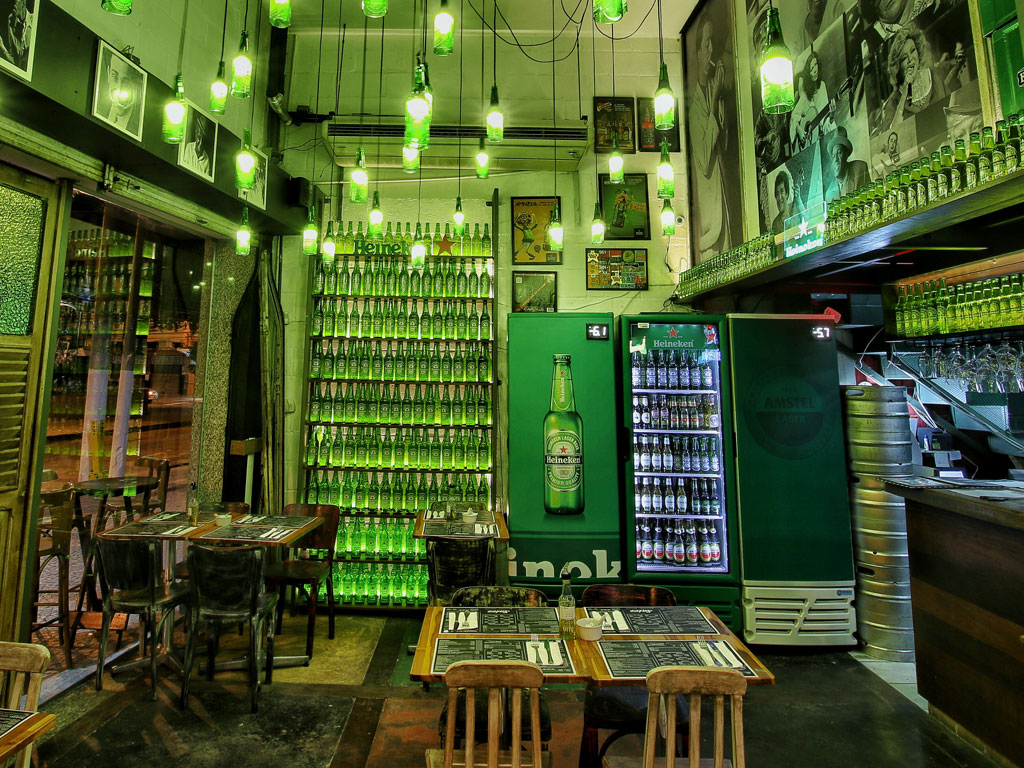 Rio | By Juarez Becoza
By Juarez Becoza
Rio Cariocas don’t give much love to Niterói, joking that the only reason to go to this city across Guanabara Bay is for its spectacular view of Rio de Janeiro. But while less busy and far less popular than Rio, Niterói is full of lovely beaches, great museums, excellent restaurants and hundreds of bars.…
Legión Americana
Calle Celaya 25, Hipódromo Condesa
Tel. +52 55 5564 3386
Hours: Mon.-Fri. 11am-7pm