In Mexican cuisine, sweets are for the most part simple treats that are enjoyed at the park, market or beach, such as caramelized fruits and vegetables, blocks of nuts or amaranth seeds held together with honey, or small rice paper cakes filled with honey. The common denominator of most of these sweets is their simplicity. When it comes to ice cream and other frozen delights, however, the country truly shines, with an astounding variety of cold treats to please sweet tooths of every persuasion.

The range of frozen desserts found in Mexico City includes everything from raspados – ice shavings served in plastic bags or cups to which a flavor of choice is added – to Italian gelato served in some of the most sophisticated restaurants in town. One of the most common frozen treats in the city is the simple paleta, a flavored popsicle made with natural juices and fruits. There are paletas made with processed flavorings, but most Defeños, or residents of Mexico City, prefer to buy natural popsicles from small paleterías (popsicle carts on the street) or neverías (ice cream parlors). 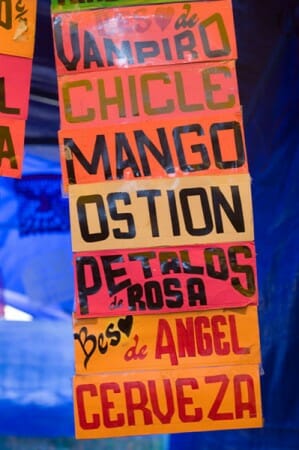 Ice cream, or a form of it, was first brought to Mexico in the 16th century by the Spanish conquistadores, but it wasn’t until the 18th century that it became a popular treat among the privileged classes of colonial society. After Mexican independence in 1821, and the resulting demise of the Spanish Crown’s three-century monopoly on the ice trade, ice cream finally became more accessible to the masses, and became a popular treat throughout the country. When Mexico City incorporated neighboring towns such as Coyoacán, Xochimilco and Tulyehualco in the 20th century, it also absorbed a strong ice-cream-making tradition. Today, central Coyoacán is still famous for its many neverías and paleterías, and a trip to this bohemian neighborhood is not complete without a stop at one of them.

The ice cream sold by the roadside in the more rural areas of Xochimilco and Tulyehualco is also something of a required snack for all travelers entering or leaving the city. The bright tarps and wooden buckets of ice in which vendors prepare their ice cream are unmistakable. Flavors range from the traditional vanilla, chocolate and strawberry to the more exotic rose petal, tequila and nopal,or cactus patties. Every year in early spring, Tulyehualco holds an ice cream fair that is one of the most exotic culinary adventures the city has to offer. Vendors cater to both traditional palates and to more adventurous eaters, with a myriad selection of flavors of which the more exotic can include beer, mole, various kinds of chilies, oyster (ostión), and even snake (vibora) and skunk (zorillo).

For the visitor who can’t make it to the annual ice cream bonanza in Tulyehualco, here are our recommendations of Mexico City venues that won’t disappoint:

The first time we encountered the wandering ice cream man Benny, he was standing at the corner of Talavera and Mesones in the Centro Histórico. It was a hot day and we decided to sample his ice cream. Our taste buds immediately fell in love with the rich blackberries-and-cream variety. Other equally delicious flavors we’ve tried are the coconut with pineapple and the tres leches, made with “three milks”: condensed, evaporated and cow or goat’s milk. A native of the state of Guanajuato, Benny lived in Florida for 12 years. After returning to Mexico in 2010, he decided to work on improving his dad’s ice cream recipe. The result was a delicious ice cream that he’s been selling on the street ever since. Although Benny moves around, he can be easily recognized by his cowboy hat and the people who follow him as he pushes his cart along. 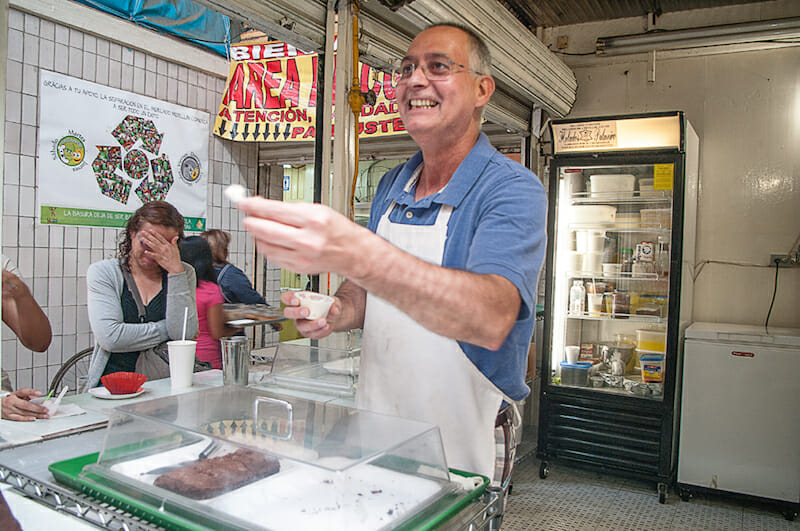 Mercado Medellín in Colonia Roma is full of culinary surprises, including Helados Palmeiro, offering Cuban-style ice cream made with natural and top-quality fresh ingredients. Cuban native Eugenio Palmeiro opened his own ice cream parlor because he was disappointed that he couldn’t find the ultra-creamy variety in Mexico City that he remembered from his native island. The tastiest flavor by far is the mantecado, made with Eugenio’s grandmother’s recipe. While he won’t reveal the secret ingredients that go into it, Eugenio is proud of this silky ice cream that doesn’t overpower with sweetness but has a very agreeable and subtle taste. Another great treat here is the eskimo, a smooth mixture of milk, ice, sugar and a flavor of choice. Add a scoop of ice cream to the mix and the eskimo becomes a malteado.

In November 2012, three friends – David, a marketing professional, Romy, a chef, and Federico, an entrepreneur – opened an ice cream parlor in Colonia Roma that stands out from all the rest: it offers alcoholic ice cream and sorbets. It all began when the trio came up with the name Helado Oscuro, roughly translated as “Dark Ice Cream,” for their parlor. “After we had the name,” says David, “the rest came easily.” Romy had always wanted to experiment with different ice cream flavors and the new venture gave her the perfect opportunity. 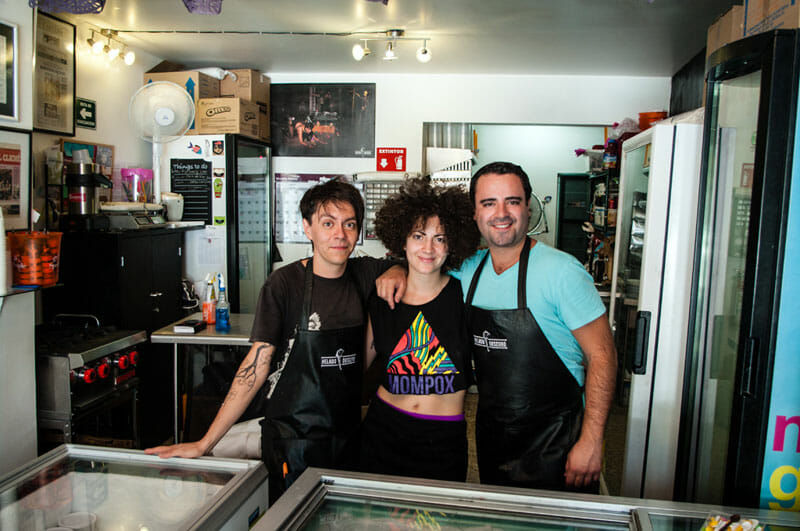 Silky and exotic, the ice creams at Helado Oscuro are the perfect treat for adults after lunch or dinner. On a recent visit, we tried the “Naranja Mecánica,” or “Clockwork Orange,” made with orange, gin and orange liquor. Other combinations we recommend are the “Galaxia Ficticia” (“Fictitious Galaxy”), made with cookies and cream, Kahlúa and Bailey’s; the “Dirty Wonka,” made with Nerd candy, fruit liquor and vodka; and the “Blind Melon,” made with melon, lime, mescal and Midori. For children, Helado Oscuro also offers a smaller variety of non-alcoholic ice creams and sorbets in flavors such as strawberry, mango and lime.

La Especial de París, Nevería Roxy, and La Bella Italia are some other ice cream parlors in Mexico City worth checking out.

Editor’s Note: As summer heats up in Mexico City, we thought it was worth rerunning this 2013 piece about Mexico City’s ice cream scene. 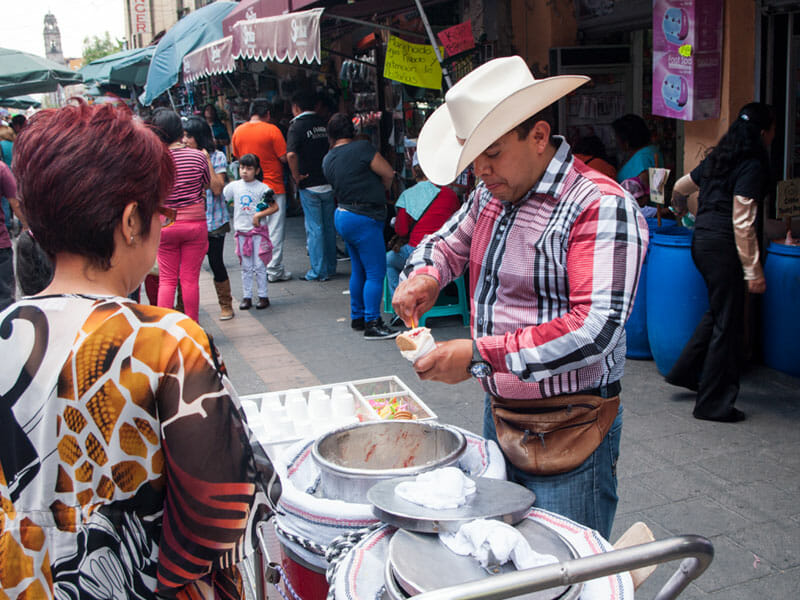 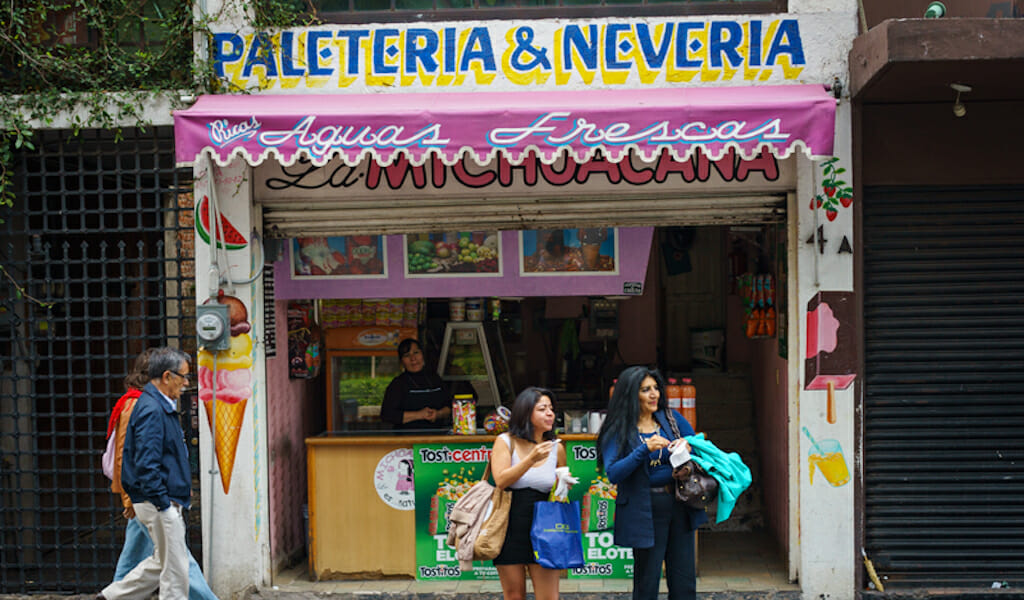 Paletas and Raspados: Cooling Down in Mexico City

Mexico City | By Ben Herrera
By Ben Herrera
Mexico CityMexico City is blessed with great weather all year round. Summer is not very hot because it’s the rainy season, and at 2,200 meters above sea level, things cool down very fast as soon as the rain starts falling. However, we still get our hot days, especially in the spring, and even early afternoons in…