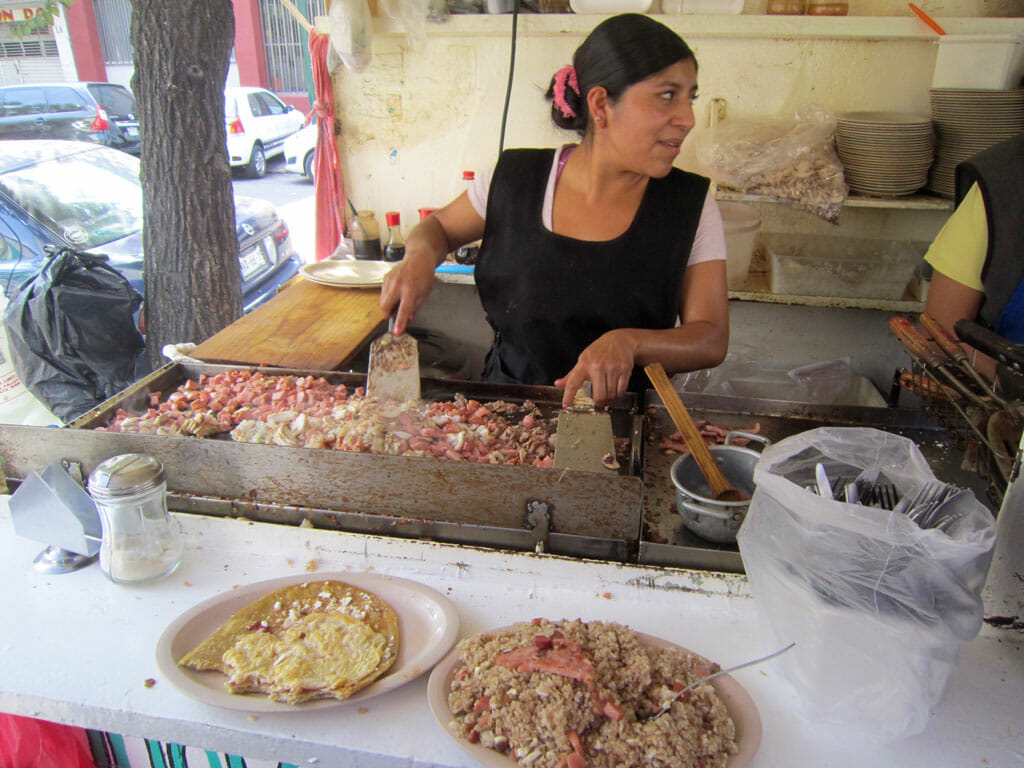 Standing on a sidewalk at 9:30 a.m. in Mexico City, waiting for food, one typically imagines pan dulce (sweet bread), tamales and piping hot atole, a drink made from corn.

Yet there we stood waiting for Arroz Black Tiger – a steaming, heaping, fried rice dish with salmon, surimi, shrimp and white mushrooms, something you might find for dinner at a trendy Asian fusion restaurant in Roma or Polanco, but certainly not for 135 pesos (US$7.30) and not at that hour.

Nevertheless, business was humming, and several clients rushed in and out to place orders for their office, buying early before ingredients start to run out.

Why so early? Well, according to the founder, Guadalupe Fuentes Ochoa – better known for his wrestler persona, “Baby Face” – “It’s about getting it fresh.”

“We get it every morning at 4 a.m. from the Central de Abastos” – the colossal, mostly wholesale marketplace for fresh food coming into the city.” Standing before a stack of coolers filled with seafood and meat, he showed us the goods, holding out a handful of fresh, boiled shrimp, which we gladly sampled – clean flavor, al dente, just a little squeaky and ready to hit the skillet.

Baby Face casually munched on the goods while juggling customers, employees and a pesky reporter with ease and good humor.

We asked if he sent someone for the food. “No! Look at the truck right there! We go every day.” He was half-indignant, half-grinning. 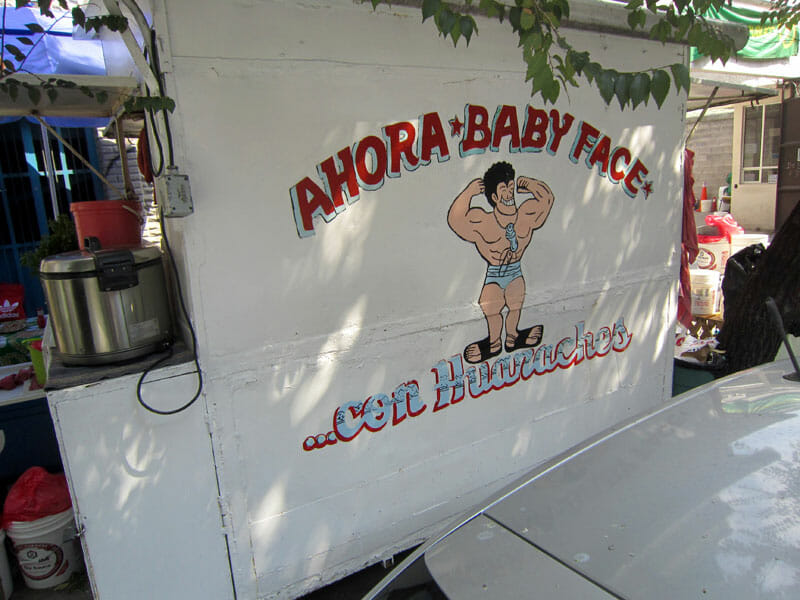 Arroces Baby Face (Baby Face Rices) has a menu offering 22 grilled rice dishes every day, with seven additional specialties available Thursday and Friday mornings. Regardless of the day, the prize ingredients – items like shrimp, scallops and salmon – usually only last from opening time till around 11 a.m. The stand closes once the last of the ingredients – usually chorizo or beef – finally runs out, generally around 4 p.m.

The veteran luchador opened the street stand in 1995, adding a well-executed Japanese twist to the usual callejero ingredients – think eggs on rice with chorizo and shrimp, or surimi and carne asada or pork chops, scallops and hot dog slices, salmon and Oaxaca cheese. Toss in some nopales (cactus), mushrooms, onions or bell peppers and you have Arroces Baby Face, a cult chilango favorite.

We are amazed that this place has been running for 21 years now, and even on our afternoon visit, the stand was plenty busy. Every few minutes, we would hear the disappointment of some customer that such-and-such had run out, but they would inevitably and gladly take whatever remained.

There’s nothing more Mexican than Lucha Libre wrestling, and there’s nothing new about wrestlers retiring from the ring to fire up a grill at signature eateries. In fact, several dot the area around Mexico City’s famous Arena Mexico wrestling venue near downtown. However, most of these lean heavily on oversized and overpriced torta sandwiches and traditional Mexican fare, offering little in the way of variety (though, as we’ve written previously, El Cuadrilátero is one exception).

But fortunately for us, Baby Face went to Japan and brought home a hit.

The wrestler was an international star in the 80s and 90s, frequently traveling abroad to delight fans with the telenovela-level drama and acrobatic fanfare of masked wrestling.

There’s nothing more Mexican than Lucha Libre, and there’s nothing new about wrestlers retiring from the ring to fire up a grill at signature eateries.

It was over the course of 10 extended trips to Japan, beginning in 1985, that Baby Face fell in love with the street food he found there.

His wife, Mari, who runs the afternoon shift, explained how the stand came to be: “He saw the street stands in Japan and saw in them a similarity to how Mexicans eat.” She pointed to the half-dozen patrons congregating at the food stand counter and chowing down at the tables set up around it. Drawn to the hot-off-the-grill dishes made mostly of rice with fried eggs as well as the popular nature of the street stand, Baby Face became a fan. 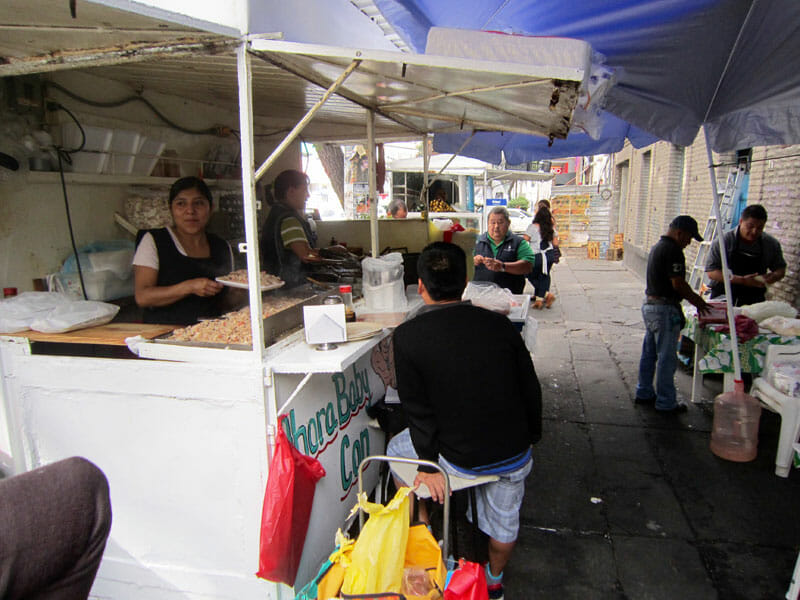 Bringing it to Mexico, he gradually incorporated those ideas, deciding to use only the hulled, short-grained sushi rice that was the standard in Japan. While rice is a frequent ingredient found at Mexican street stands, Baby Face’s stand is the only one we can remember seeing here that employed an industrial rice cooker to achieve consistently non-sticky, non-glutinous rice, equally useful either steamed or fried with the ingredients in the dishes.

In addition to the rice dishes (often named for the wrestlers who favor them), Baby Face offers huaraches – flat, sandal-sized, thick strips of grilled masa (corn dough) that can be covered with 38 kinds of toppings.

Arriving around 3 p.m. on our first visit, we were denied a majority of the options with ingredients running low but still did fine by two huaraches and a rice dish.

The Arroz a la Mister Aguila featured a mostly-deboned smoked pork chop blended with inch-long beef strips, hot-dog bits and mushrooms on a bed of fried rice. It also included Oaxaca cheese, a string cheese – however, with this preparation the cheese was sliced into bits before going onto the grill, making crispy-outside, gooey-inside chunks. The portion is considerable and could easily make an entire meal for one.

All of the dishes have a very comfort food feel to them, and there is really a homey vibe, sitting just across from the two grill cooks, watching them manage rotating heaps of food.

While most of the rice platters come infused with a light touch of soy sauce, a large igneous molcajete (mortar) adorns the counter and is filled with a habanero-based salsa that can really knock your socks off. A little goes a long way, but still, the sweetness of the habanero really comes through, helped by spices and bits of miscellany tossed in and floating around in the soupy sauce to balance it out.

Baby Face also offers a salsa verde and pasilla sauce – the former a more robust and a little hotter than most, though cooler than the habanero. The pasilla sauce is sweetest of all, with the hints of smoke and raisin typical of the chile and is the least spicy of the three.

Our first huarache was a strictly basic one with scrambled egg, which was garnished with queso rallado (grated white cheese) and a smattering of a thin tomato-based salsa.

Trying the basics allows one to get a hold on a restaurant’s fundamentals, which was the case here. A lot can go wrong with a huarache, and more often than not, the failure comes with the masa. They are often overcooked, allowed to cool and then reheated, making them hard – sometimes impossible – to bite or cut, usually splattering ingredients hither and thither in the process. Both of our huaraches were solid enough to support the ingredients, super fresh and cooked just enough to for teeth to easily bite through.

When we came back on a Thursday morning, we were eager to try out some of the more exotic fare. We started with the Black Tiger but had great difficulty making a decision. After watching several come out, we have to admit we were gawking at the Arroz a la Telmex, decked out with three grilled salmon filets on steamed rice – simple and savory.

The stand has a fun sense of marketing that has clearly paid off with its steady jobby-job clientele. Like the Telmex, a lot of the dishes are named for companies with big offices in the neighborhood – the biggest being the nation’s largest broadcaster, Televisa, who coincidentally have a big stake in the Arena Mexico. 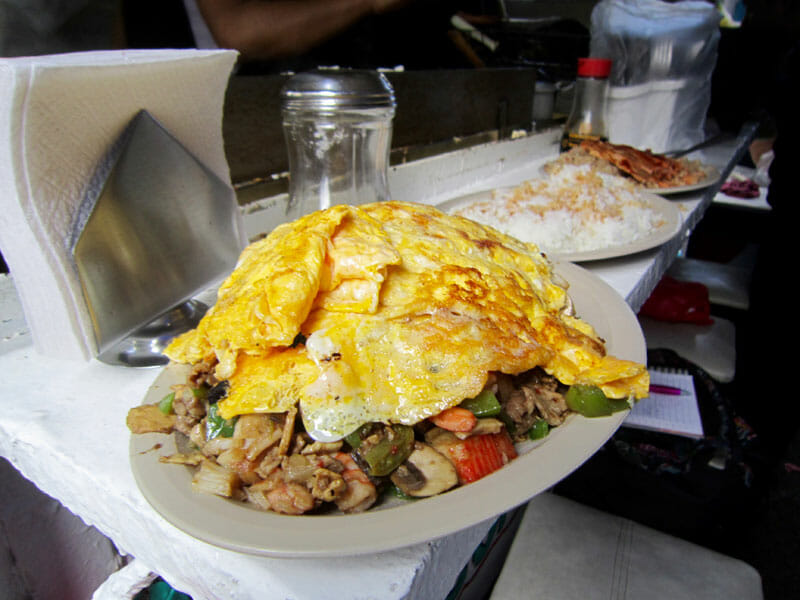 The Arroz a la Terror Chino also looked tempting, with fried rice, white fish, mushrooms, shrimp and surimi. However, knowing there is a limit to one’s appetite, we had to go for the mother lode: the Apestoso Especial (“The Stinky Special”). This thing included the kitchen sink and arrived on two platters, one for a heap of steamed sushi rice, the other for the grilled ingredients: shrimp, surimi, beef, chicken, hot dog, cactus and bell pepper topped with eight (eight!) egg whites (some yolks got into ours – oh well) cooked omelet-style and placed like a warm blanket over the treasures beneath it.

Chatting over a box of seafood, while the cooks were assembling that beast, we watched Baby Face sampling the goods. He got us to try some scallops, which turned out to be totally raw. He laughed, shook his head, and just said, “Don’t worry, it’s fresh.”

Observing the circus going around him, we said, “So, you’re the boss.”

“Yeah, I guess so. That’s what some of these guys tell me, I don’t know either,” he answered, chuckling. “All of us here, we are all in charge of our job. Here, we are all owners.”

One imagines the food could be sold for a lot more at an upscale place only a short cab ride away. We remarked that this is great food but that a place with plastic chairs and tables and a hand-painted metal stall at the center is anything but luxurious.

“Who needs luxury? We’re better than the luxury places. We are the best,” He gave us a heavyweight nod and a grin. 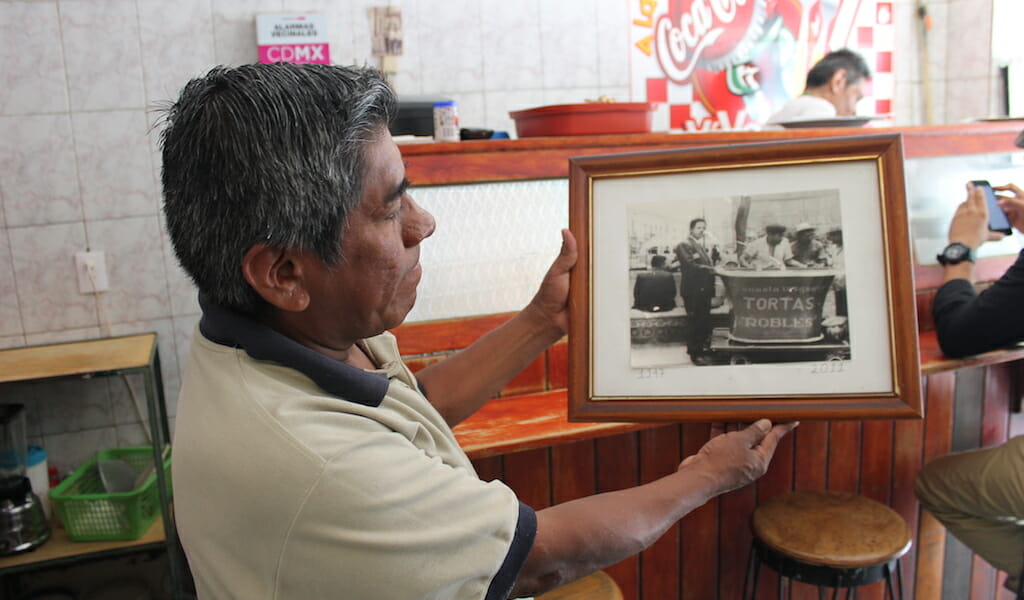 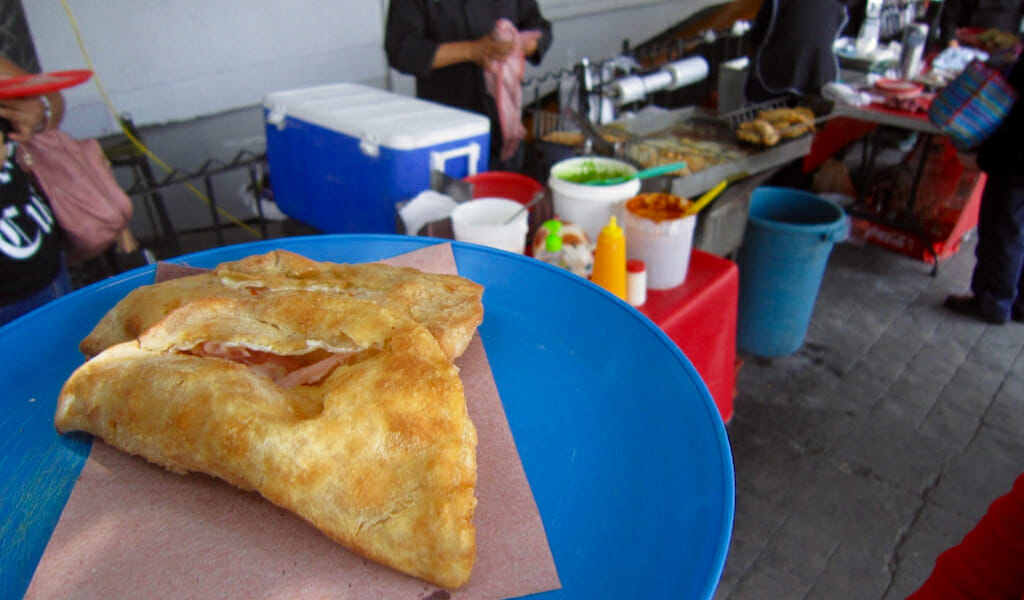