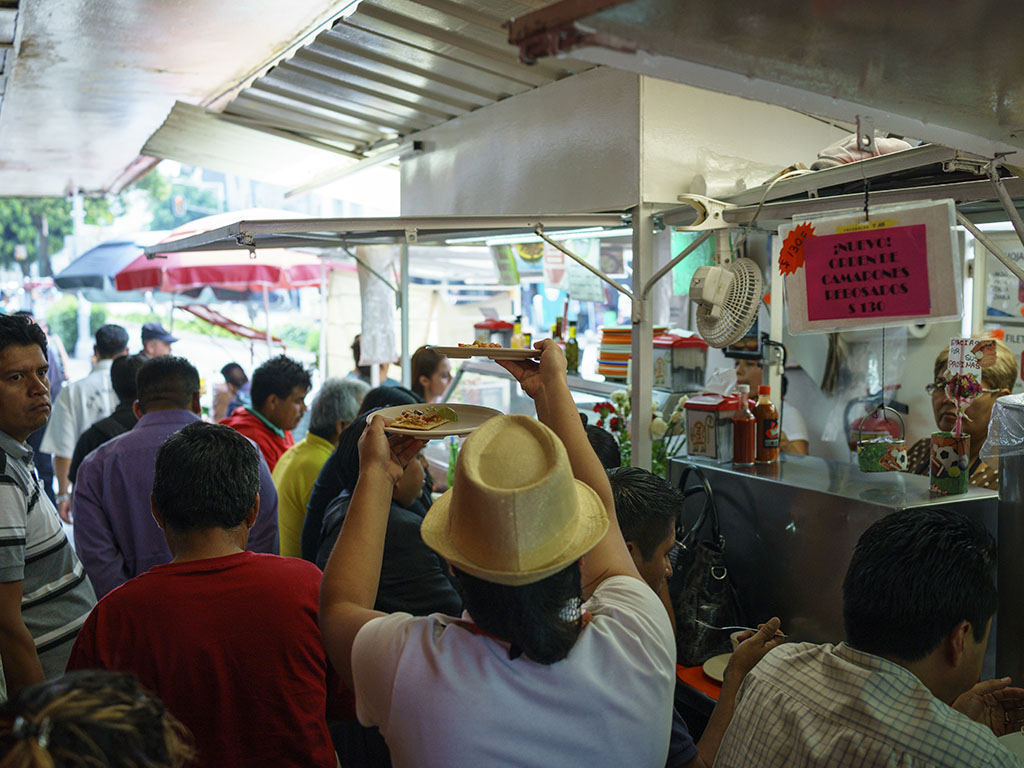 Tacos El Patán
For the second consecutive year, tacos El Patán has made it to our list of favorite places to eat in Mexico City. This eatery is located in one of the busiest commercial sections downtown. They have expanded their operations since last year, and they now can be found a few meters down from the original location. El Patán is open every day but only serves fish tacos, the best item on the menu, on Wednesdays, Fridays and Saturdays. Those days they also offer skewered shrimp and deep-fried fish quesadillas made with the same fish as that used in the tacos. The rest of the week, the taquería offers cecina (salted beef), chicken, suadero (brisket), al pastor and longaniza (sausage). 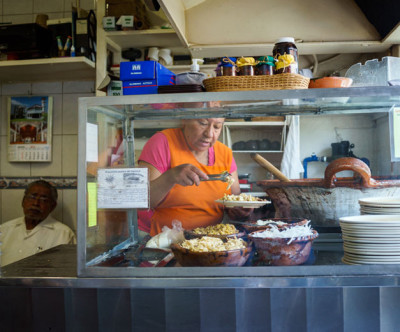 Mole is one of the most representative dishes in Mexican cuisine. Several regions of the country have their own version or versions of mole, and we’re always excited about finding new ones in the city. This hole-in-the-wall eatery has been serving a mole nupcial (wedding mole) from Estado de Mexico for more than half a century. There are other dishes, of course, but it would be unpardonable to come here and not to get either the enchiladas de mole, or enmoladas, or a piece of chicken bathed in this mole sauce. 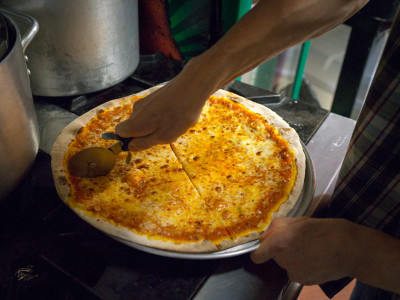 Every so often we find ourselves in the mood for a good pizza or pasta dish, and when that happens, we head to Kemi, in the heart of Zona Rosa. Chef Azbi’s resume is long. An Albanian immigrant who lived in Italy before moving to Mexico City – where he has worked at high-end Italian restaurants – Azbi opened his own restaurant about two years ago. The place is tiny, with only two small tables and a narrow bar for seating. But you won’t care where you sit when you see the perfectly charred, thin-crusted beauties that emerge from the oven. The pastas show the chef’s attention to detail. We especially love the lasagna, which is like no other we’ve tasted in Mexico City. Our favorite pizza is the Kemi especial, topped with goat cheese, tomato and artichokes. Offering pizza sold both whole or by the slice to hungry late-night revelers, this pizzeria has become one of our favorite stops for non-Mexican food in the city. 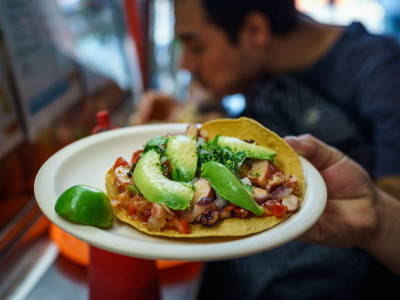 Mexico City might be landlocked, but El Caguamo (aka El K-guamo) makes it a seafood paradise. We visited this sidewalk booth in busy downtown a few years ago for the first time and fell in love with the food. Since then, the eatery has expanded to a few more locales while maintaining the same high standards. El Caguamo has a big variety of seafood and shellfish dishes that are prepared in a kitchen located in the building right in front of the booth. Our favorite item to eat in a hurry is the tostada de jaiba, a perfectly cooked blue crab ceviche served on top of a crunchy tostada with onion, lime juice and avocado. A few drops of the house habanero salsa point up the freshness of the jaiba and give it some heat. One new item on the menu that we loved was the mixiote de pescado. Mixiote is a traditional pit-barbecued meat made in central Mexico. El Caguamo took the spices from the mixiote and swapped out the meat for a piece of grouper, which was cooked in an oven for 20 minutes, making for a deeply flavorful and satisfying dish.

Location: Ayuntamiento at the corner with López and López 82 and 83, Centro Histórico
Telephone: No phone
Hours: 10am-7pm 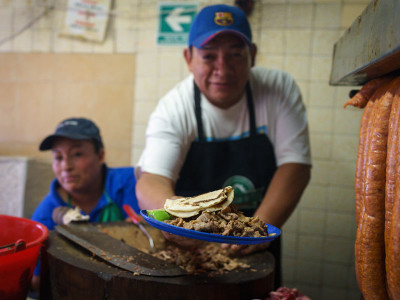 This family-run business has been going strong for 49 years in the Azcapotzalco neighborhood. The secret to this taquería’s success is very simple, according to the owner. It all comes down to one single ingredient: All the meat is marinated in the fat from a female yearling sheep. A taco at Los Parados de Don Pepe is like no other taco in Mexico City. Each order comes piled high with a whopping 300 grams (11 ounces) of meat – a choice of bistek (steak), chuleta (pork chops), suadero or longaniza. And it comes accompanied by half a dozen fresh, handmade tortillas. One taco can easily feed two customers or a single extremely hungry one. For 80 pesos (US$4.70) you can also order a quesadilla that comes in the same fashion, with a large portion of Oaxaca cheese topped with several handmade tortillas. In a city where tacos are everywhere, Los Parados de Don Pepe has won a special place in our stomachs. 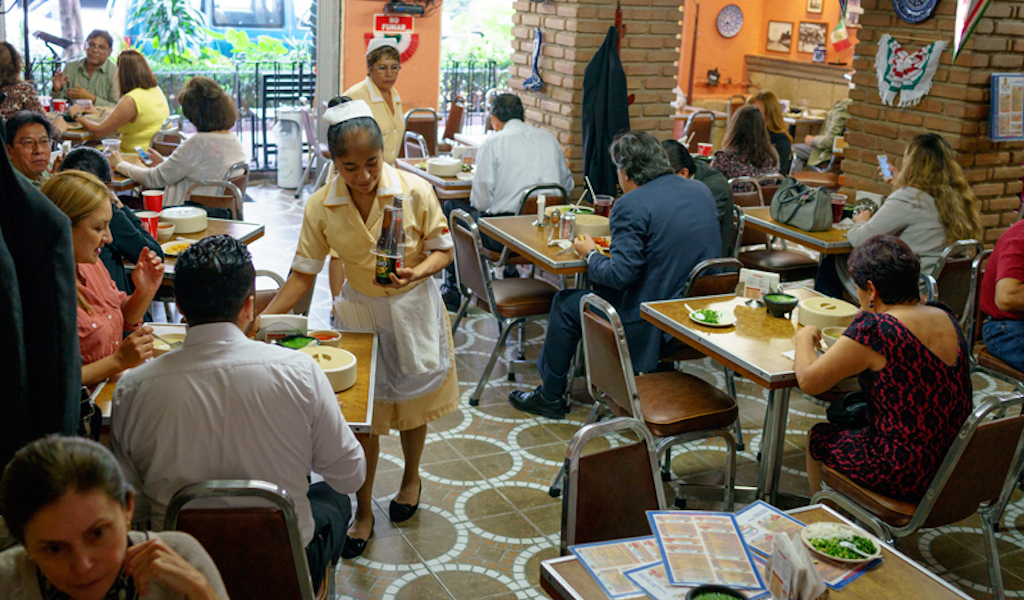 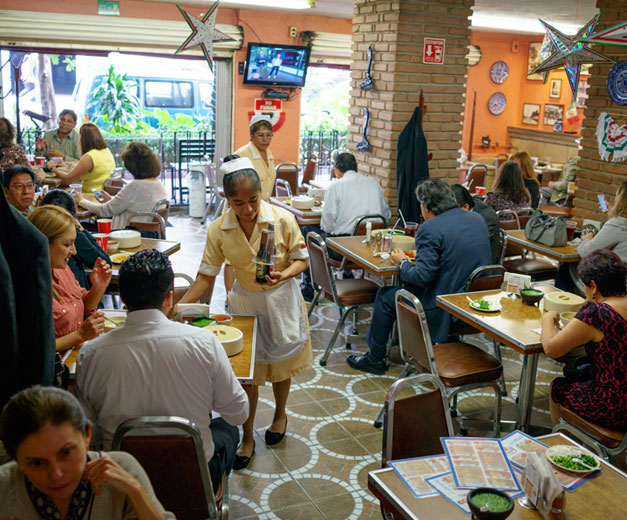