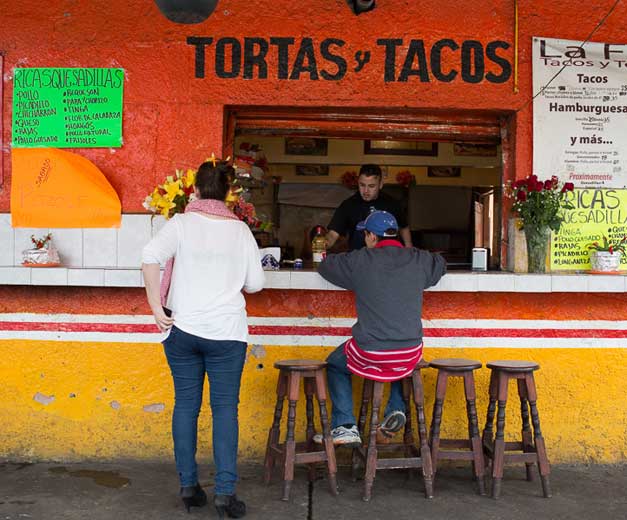 Editor’s note: In the latest installment of our recurring feature, First Stop, we asked Asia-based photographer David Hagerman where he stops first for food when he arrives in Mexico City. Hagerman’s work has appeared in the New York Times, Saveur, Food & Wine, AFAR, SBS Feast and the Wall Street Journal, among many other publications.

Wherever I go, the first thing I do on Morning Number One is rise early and head to a market to photograph, get myself oriented and, of course, eat. One of my favorite markets in Mexico City is in Coyoacán.

The neighborhood is a quiet, leafy suburb 30 minutes or so from central Mexico City. The market itself is small enough to not be overwhelming, yet large enough to house plenty of stalls displaying all sorts of produce, cheeses and sweets from around Mexico, as well as prepared foods. Across from the market is a nice square with benches to facilitate serious people-watching, a few cafés for great coffee and not one, but two paleta (popsicle) stores.

I live in Asia, so anything made with corn – especially dried corn, which we don’t have in Asia – is fine by me. There’s a stall at one entrance to the market building that makes fantastic quesadillas (cheese and zucchini blossom is my favorite, but nopales and cheese is a close second), and inside at the back, there’s a classic taco seller where you sit at the “bar” before a heaving plate of meat and parts and order, eat, order and eat till you just can’t eat another taco. Around the corner is El Presidente, a guy mixing fruit shakes and eskimos, which are super whipped and almost meringue-like. I love that there are so many fresh seasonal fruits in the market that can be blended into a refreshing (read: jet-lag-busting) burst of energy.

I went to D.F. for the first time a couple of years ago to shoot a story for the NYT Travel section, and the market was to be part of the story. I arrived a few days before the writer (JJ Goode) and featured chef (Roberto Santibañez) and figured it was as good a place as any to acclimate to this new-to-me city. I had arrived at 2 a.m., and the airline had lost my luggage, so I was pretty disoriented and worried for my stuff (equipment I needed for the shoot, not just clothing). But I found my way to the market, and once I got there and chatted with a few vendors (and tucked into a taco or two), I knew everything would be okay. Markets are like that for me – a travel salve of a sort.

I prefer to go in the morning. Thursday is the big market day, but any day is fine by me. If you get there around 8 a.m. or so, the streets and central square are quiet with joggers and few dog walkers. There is a fantastic tamale stand run by a family just outside Lecaroz bakery. They make Oaxacan-style tamales (verde, dulce or mole) served with champuraddo (drinking chocolate thickened with masa, or corn flour). From there I head down to the market, which gets going at about 9 a.m. I’ll walk around the market, maybe have a juice or eskimo, then head outside for a quesadilla or two. From there I like to just walk down the tree-lined streets and take in the color. I’ll wind my way back to the central square and maybe grab a tamarind or strawberry crema paleta and take a bench in the park. On most days there will be musicians or street performers so there is always something to look at or listen to.

I had some preconceived notions of what Mexico City would be like before I arrived, but have to say that my first stop in Coyoacán changed the way I saw the city and approached its many neighborhoods. 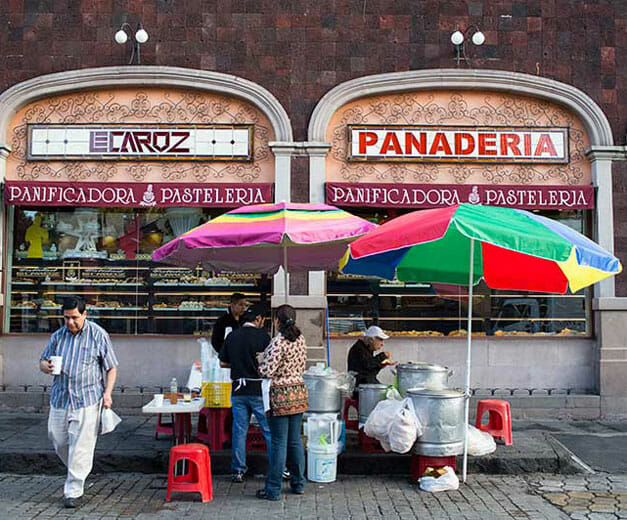 Mexico City | By Winnie Yang
By Winnie Yang
Mexico CityEditor’s note: We asked writer JJ Goode where he heads first for food when he lands in Mexico City. He has written about food and travel for The New York Times, The Wall Street Journal, Gourmet, Bon Appétit and many other publications. He is also the co-author of Pok Pok: Food and Stories from the Streets, Homes, and…