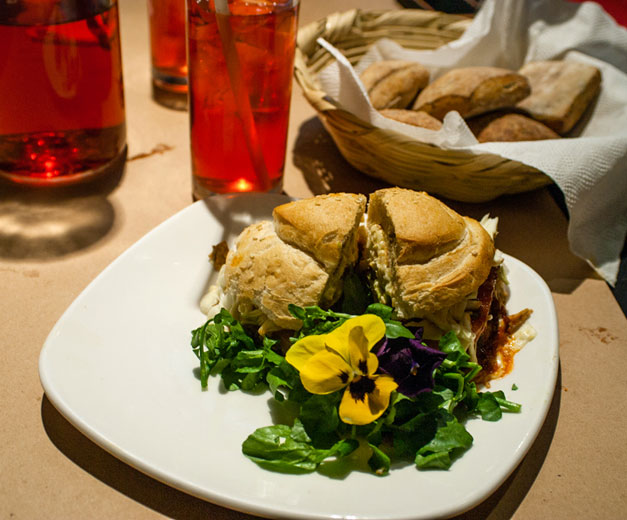 While its neighbor to the north is known as a melting pot, Mexico itself is a veritable queso fundido of ethnic and cultural diversity. The merging and clashing of the indigenous and Spanish religions, customs and ingredients have given every region of the country its own traditions, holidays and cuisine. And because Mexico City draws immigrants from all over the country, the capital’s food offerings have become among of the richest in the country.

The cooking of Puebla, a city just a couple of hours east of the capital, is considered by many to be among the country’s most exquisite. In Mexico City, the cuisine gets its due at Angelopolitano, a restaurant that has been generating raves since chef Gerardo Quezadas, a native poblano, opened it less than a year ago. Julio Lugo, the manager of the restaurant, told us that Quezadas has opened and then sold many restaurants with many different concepts throughout his long career. Angelopolitano, however, is a project born out of love for la cocina poblana. “People have tried to buy the restaurant and its concept, but despite the many troubles we’ve gone through with this place, Gerardo is not willing to sell.”

Quezadas’s love for la cocina poblana has been clear in every bite we’ve had at Angelopolitano. The restaurant is named after one of the most important symbols of the city of Puebla: angels. While the chef’s ambitions and standards are high, he keeps the prices, portions and tastes close to those you would find in the markets and family-owned restaurants of Puebla. Quezadas adds his own touch to traditional dishes, but in them you’ll find echoes of the long line of cocineras who have prepared them for generations. 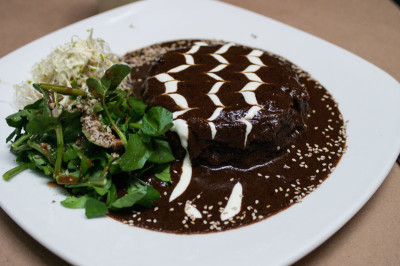 A good example of this is the mole poblano, perhaps the best known mole inside and outside of Mexico. Quezadas bases his on a recipe from a 19th-century cookbook, which combines the pleasant bitterness and sweetness of chocolate with numerous savory ingredients and spices, making for a profoundly complex and fascinating dish. To this, he adds edible flowers, which brighten not just the dish’s appearance but also its flavor. We also loved the mole verde picosito (spicy green mole), tortilla soup, chiles mecos (dried chipotles filled with ground beef, chicken and refried beans in tomato sauce) and the cemitas, sandwiches made with a special egg and sesame seed bread, also called cemita, and filled with pork, chicken, turkey and other ingredients.

But the dish that we would go back for again and again is the champandongo, a tortilla, cream and chicken layered dish blanketed by a spicy mole poblano. Every bite was an explosion of flavor.

The same level of thoughtfulness and care is extended to drinks, such as the refreshing and aromatic hibiscus and rose petal agua fresca. Dessert is no slouch either; we recommend the pear with raisin liqueur and the panqué ninon, a delicious cream bread bathed in almond rompope.

The food is not the only draw; Angelopolitano is beautiful inside and out. The restaurant sits in an airy 19th-century building – on Puebla Street, no less. Quezadas is committed to social causes, and most of the servers are senior citizens who would likely have a hard time finding employment in other industries, but fit right in at this homey restaurant. “The idea is to serve fresh, homemade food,” Quezadas told us. “Just like if you were visiting your aunt’s house.” 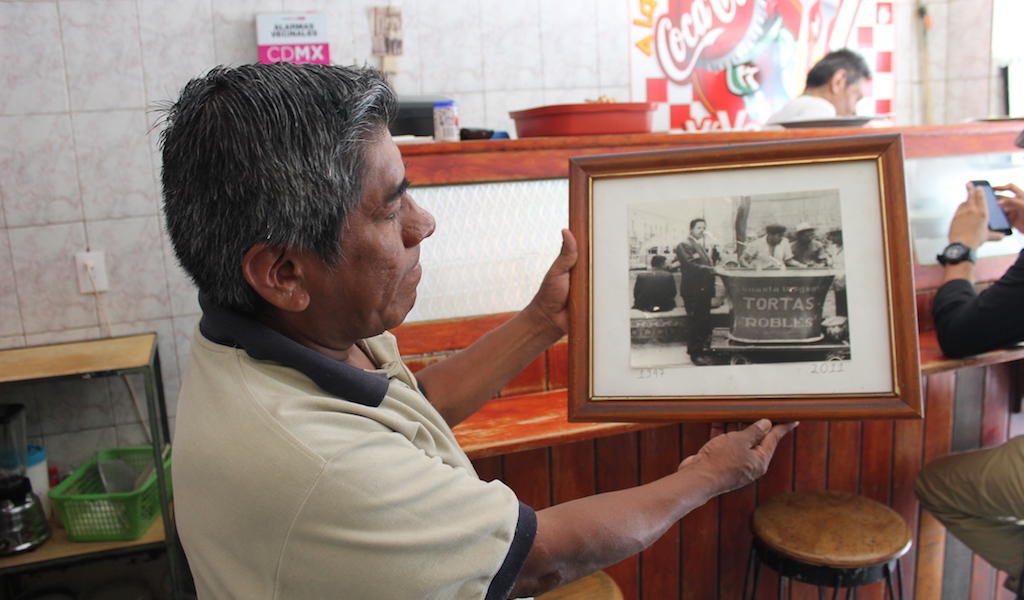 Mexico City | By Martha Pskowski
By Martha Pskowski
Mexico City The memory of 2017’s devastating earthquake still lingers in the minds of many in Mexico City, but perhaps the biggest challenge the city faced in 2018 was gentrification. Ambitious development initiatives have resulted in safer neighborhoods; however, the cost of real estate has soared, leaving many long-term residents and business owners at risk… 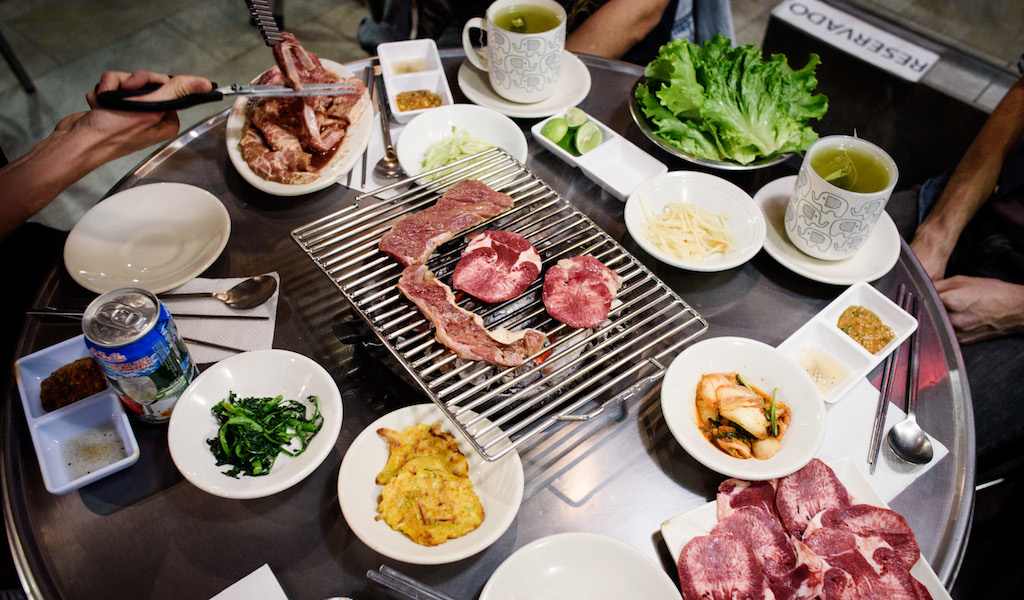 Mexico City | By Lydia Carey
By Lydia Carey
Mexico City Colonia Juárez – our 2019 “neighborhood to visit” in Mexico City – was a forgotten district for many years, known more for its karaoke bars and strip clubs than its charming plazas or cafés. Originally founded as an illustrious upscale neighborhood for the city’s industrialists, the area saw an influx of Asian immigrants… 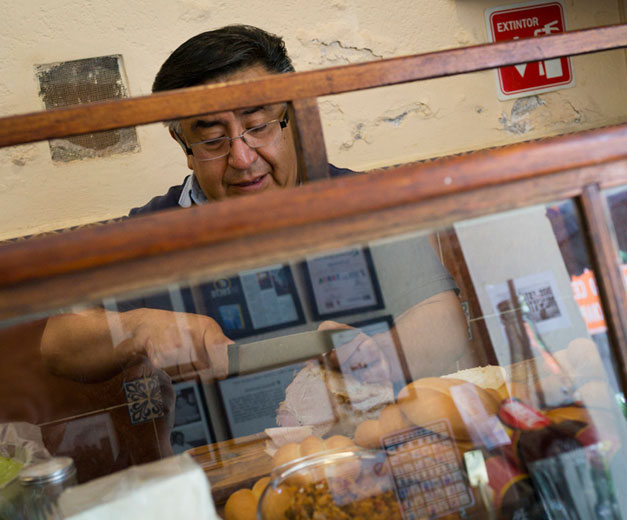 Mexico City | By Ben Herrera
By Ben Herrera
Mexico CityTaquerías are probably the most common kind of eatery in Mexico City, but torterías, purveyors of tortas, the generously filled sandwiches that come on bolillo rolls or the smaller teleras, are not far behind. From stalls at subway station exits to restaurants that have been in business close to a century, torterías are a fixture…