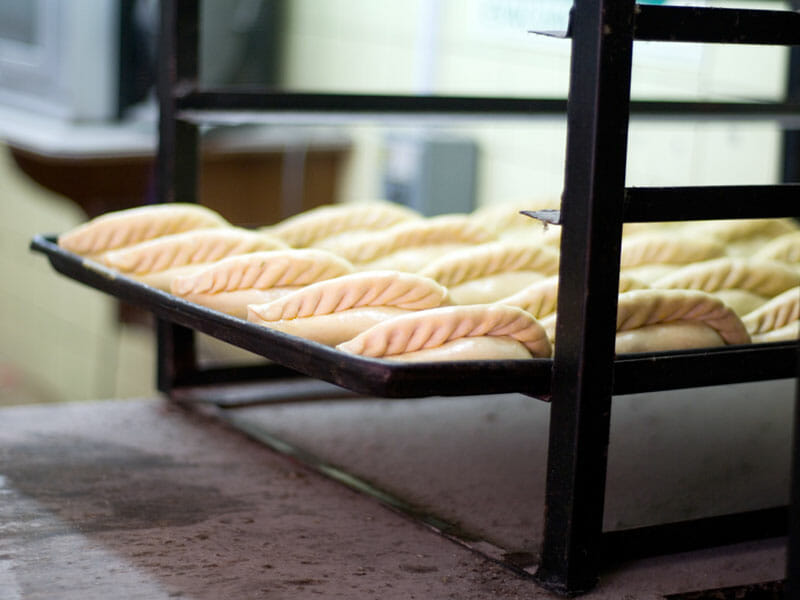 For weeks we had been passing by a small venue that filled the sidewalk with the heavenly scent of butter and pastry dough, before we finally had the chance to stop in and investigate. The source of the intoxicating aroma turned out to be Pastes Real de Pachuca, a neighborhood bakery in middle-class Colonia Tabacalera that makes excellent empanadas and pastes, a type of pastry that’s a specialty of Mexico’s Hidalgo state but hard to find in Mexico City.

Located a few blocks from the giant Monumento de la Revolución, Pastes Real de Pachuca was opened 13 years ago when Edmundo Acosta and his family moved to Mexico City from Pachuca, the capital of Hidalgo. The place is little more than a hole in the wall, essentially made up of a serving counter, a small prep area and two large steel ovens on one side. The ovens heat up the tiny space and, on the cold winter mornings so typical of the high Central Mexican Plateau, it offers a nice respite for a late breakfast or lunch. Customers shouldn’t expect a large menu, however, as this little bakery sells only two items, empanadas and pastes.

Empanadas are usually half-moon-shaped stuffed pastries similar to turnovers. At Pastes de Pachuca, they are made with a thick, flaky crust that combines lard, flour, sugar and butter. The dough is rolled back and forth through a machine that flattens and readies it to be cut and filled with ingredients. Empanadas can be either savory or sweet, and Pastes Real makes both types. For 10 pesos each, we ordered three different empanadas: jamón con queso, or ham and cheese; rajas con queso, or chili peppers with cheese; and mole rojo, a red mole sauce. All three offered distinct, tasty flavors that fully lived up to the olfactory call to our senses and had a flaky crust that left us happily covered in crumbs with every bite. But our favorite was the mole rojo, with its combination of savory-sweet that went quite well with the melt-in-your-mouth pastry crust. The sweet varieties of empanadas include apple, pineapple and arroz con leche, sweet rice pudding. 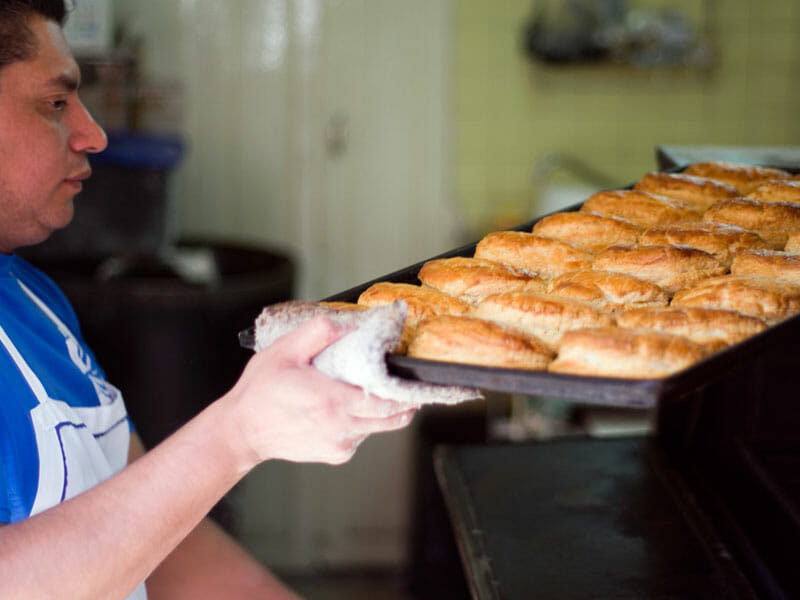 After the empanadas, it was time to move on to the bakery’s namesake item. Chatty Edmundo filled us in on the history of the paste while his mother, Mercedes Rodríguez, eyed us suspiciously, seemingly wary of our interest in her recipes. Pastes are similar to empanadas but have a thinner, more bread-like crust instead of the flaky puff pastry. These pastries were originally brought over from England (where they are called “pasties”) and were popularized in the state of Hidalgo at the mines in Pachuca and Real del Monte that were managed by British companies and initially employed miners brought over from Cornwall, considered the birthplace of the English pasty. As the legend goes, the miners needed a snack deep underground, but because it was impossible to wash their hands before a meal (or perhaps to see well in the mines’ dim light), the pastes were adapted with a special baked-in handle of crust along the side. This was used to grip the paste so that it could be eaten, and then the dirty crust handle would be tossed aside. Today, the mines may be gone, but the pastes still have their crust handles, giving the average consumer a firm handle with which to devour the paste.

There was only one type of paste ready when we stopped by, the frijol con chorizo, made of refried beans mashed with red chorizo sausage and chipotle pepper. They were excellent, the chorizo’s nice, spicy kick pairing well with the mellow bean flavor and the thin crust holding it all together without being overwhelming. Other paste fillings at Pastes Real include potato with beef, and tuna.

Pastes may have made it out of the mines, but not completely into the mainstream: While the item may be a popular one in Pachuca and other parts of Hidalgo, Pastes Real de Pachuca is the only place in Mexico City where we have seen them for sale. The bakery is one of those wonderful places that exist quietly for years, serving up great food without pretense. Sharing their passion with those lucky enough to catch the scent of baking pastes on the morning breeze, Edmundo and his mom have managed to strike gold with the simplest, yet tastiest, of methods. 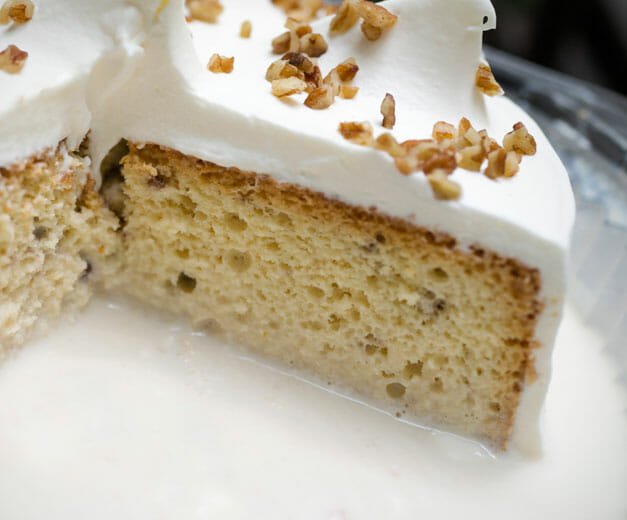 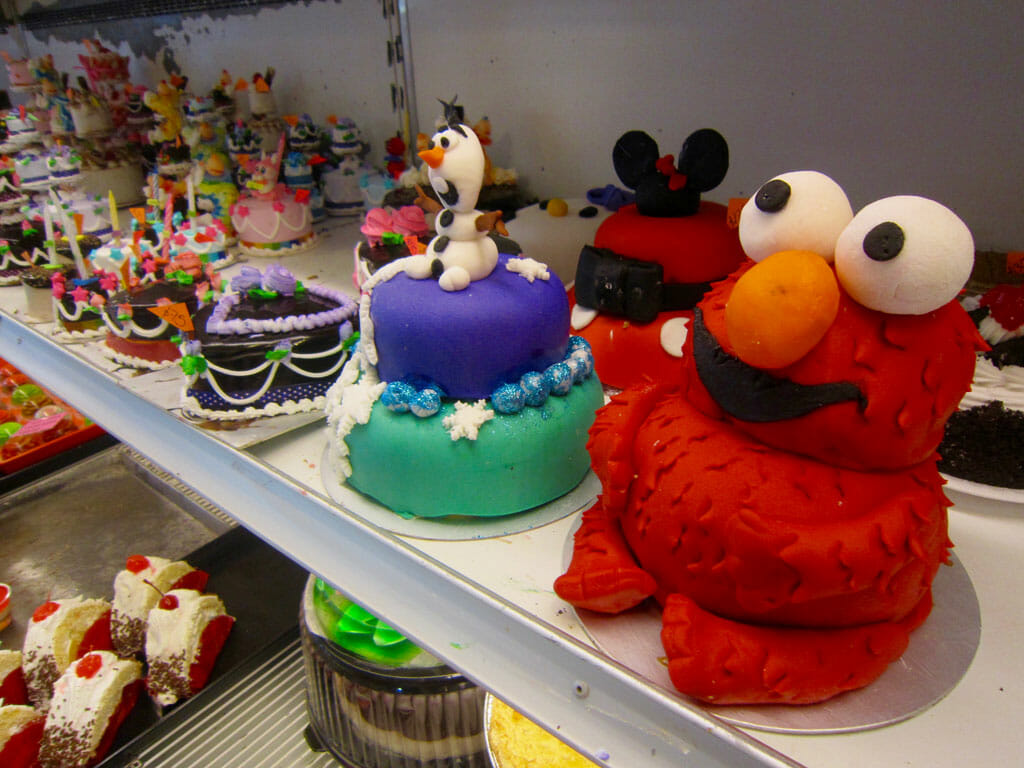