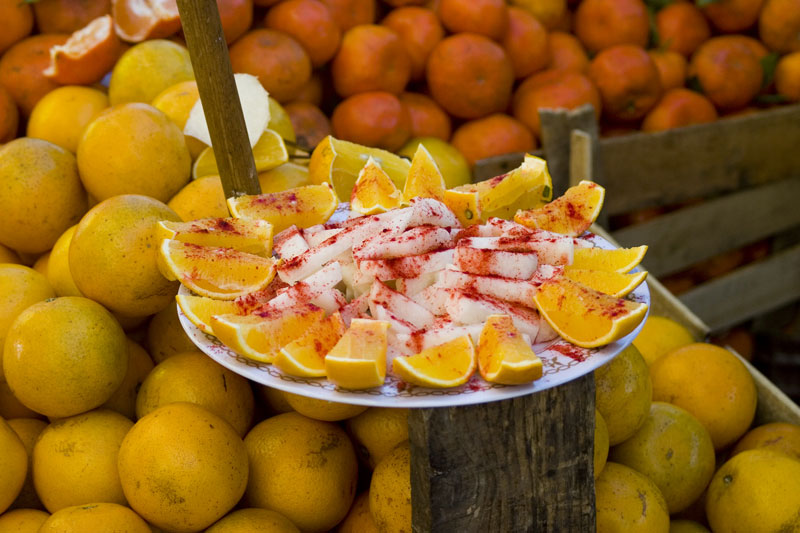 Dear Culinary Backstreets,
We’ll be visiting Mexico City and are wondering about the organic food scene. Will it be easy for us to find organic produce? How can we know whether or not something we’re buying is really organic?

In Mexico, unlike in its neighbors to the North, there really isn’t a strong pro-organic movement or a backlash against processed and frozen foods. Though this may at first glance seem like a bad thing, the reason is that a good portion of the food eaten in Mexico is already organic or, at the very least, grown with far fewer chemicals than in more developed countries.

While most markets in the city have a large selection of imported produce, particularly coming from the United States, vendors also tend to have a wide selection of local produce that is trucked in by small, independent and family growers. The difference between these classes of produce is sometimes quite obvious. Take the typical apple. The import, which usually sports a sticker, is generally larger in size, with a smooth, highly polished sheen to its fairly unblemished skin – a direct result of the abundant use of chemicals and mechanized processing. The locally grown apple, however, is usually smaller, with very little sheen and with skin that has imperfections. In other words, it looks more “natural,” and of course it doesn’t have a sticker. A locally grown apple has never been in cold storage and likely was picked the day of or the day before it arrived at the market. Such differences can be seen with almost all types of produce.

Mexico City markets also tend to emphasize produce that’s in season, meaning that at certain times of the year you may not be able to find particular local fruits or vegetables at all, but when they are in season, every vendor will have them in such numbers that prices are amazingly low. A good example is the mango. While it’s possible to find non-organic mangos year-round through importers and a few local growers, genuine organic, locally grown mangos are only available during the late spring and summer months, which are a veritable mango bonanza: The orange fruits are stacked sky-high and vendors will hand 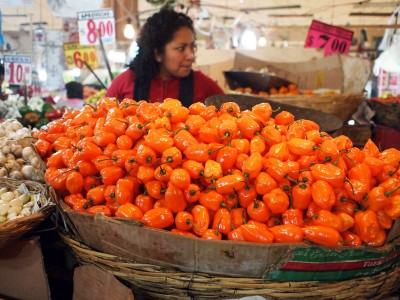 out slices to passing shoppers to entice them to buy. The competition and sheer abundance are so great that you can end up with a kilo for less than 20 pesos – and a belly full of free samples, to boot. Buying organic or chemical-free produce in Mexico City doesn’t have to mean paying a premium for quality, if you buy what’s fresh and in season.

Still, organic food as a movement is just getting started in Mexico, and the country only recently passed standards for organic certification. An advisory board known as the Consejo Nacional de Producción Orgánica (National Council of Organic Production) now regulates producers, but there has yet to be a strong push to market products specifically as organic. Many agricultural products lack official organic certification but are referred to by their producers as “natural,” meaning that they were grown without the use of chemicals or synthetic fertilizers, much the way they have been grown for thousands of years.

Mercado el 100, in the up-and-coming Roma neighborhood, is the first certified organic market in Mexico City. The 100 in the name refers to the fact that it only offers organic products grown within 100 miles (160 km) of Mexico City. The market ensures that all products sold are free of pesticides and fertilizers and that they are fresh, locally produced, grown or otherwise produced in an environmentally friendly fashion, and come from small producers. Mercado el 100 is still relatively small compared to most markets, consisting of a few dozen vendors at any given time, but it is steadily gaining a reputation and new vendors are continually joining the market.

Another organic movement comes from Xochimilco, a southern district of Mexico City built over the remnants of Lake Xochimilco, famous for the ecological preserve of Cuemanco and its chinampas, once-floating islands that were used by the Aztecs for 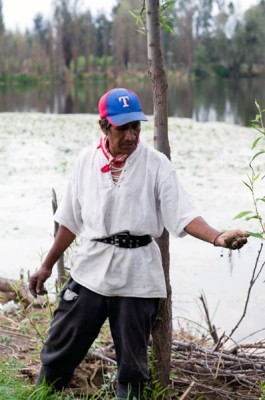 agriculture. The chinampas offer some of the most fertile ground in the area and, though most were abandoned to other uses many years ago, there is a push to return them to traditional agriculture. Just as in Aztecs times, dark, black mud is scooped up from the canal bottoms and plopped into new fields; the mud is so rich with nutrients that a full head of lettuce can be grown in just a few weeks. It is said that if just 1% of the chinampas were used for agriculture, all of Mexico City could be fed. The word is spreading and more and more restaurants and locals are interested in produce from the chinampas. De la Chinampa, led by Ricardo Rodríguez, is one of the organizations introducing natural, local produce from Xochimilco to restaurant and home kitchens around the city.

Mexico City is truly an organic food lover’s dream, but the realization and appreciation of this reality have only just begun to materialize. – Ben Herrera and Jon Seymour 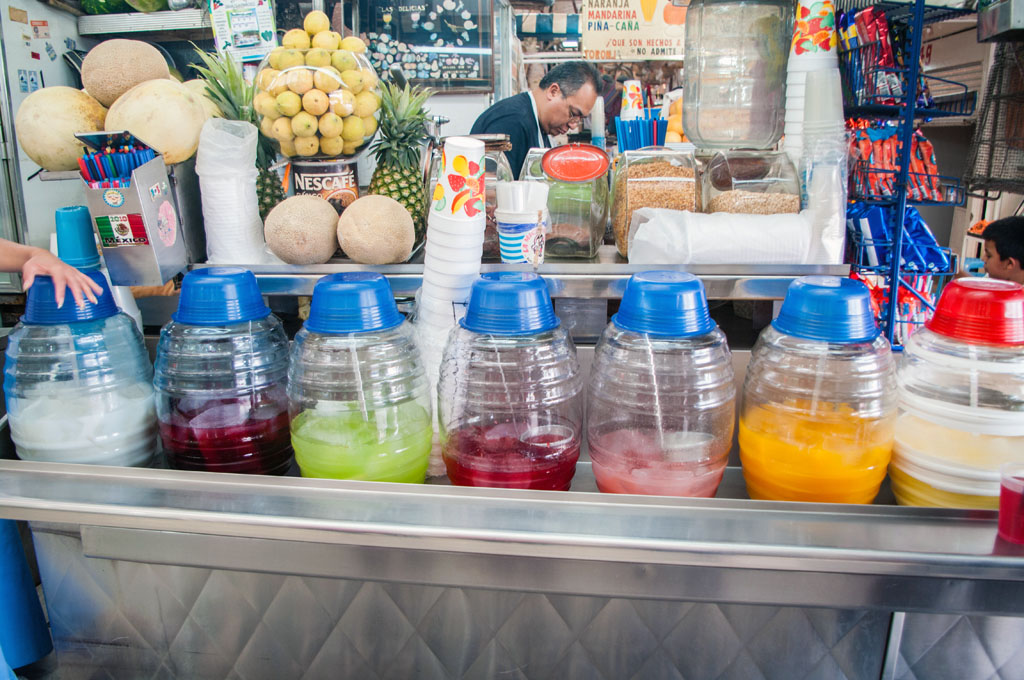 Mexico City | By Ben Herrera
By Ben Herrera
Mexico City -- Dear Culinary Backstreets, I’ve heard about drinks in Mexico called “aguas frescas,” but what exactly are they? Visitors to Mexico are sure to encounter aguas frescas, a popular category of drinks that are ubiquitous at food stands and eateries around the country. These colorful beverages, whose name literally means “fresh waters,” come in… 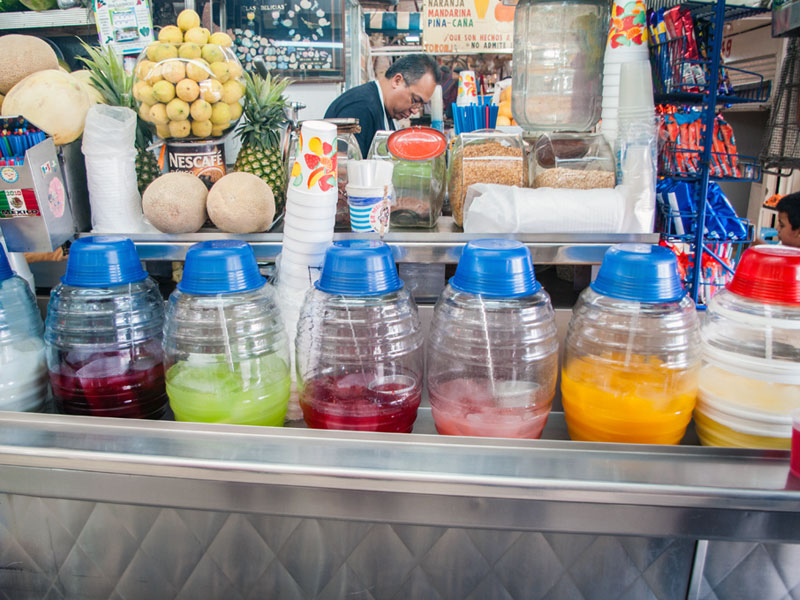 Mexico City | By Ben Herrera
By Ben Herrera
Mexico City -- Dear Culinary Backstreets, I’ve heard about drinks in Mexico called “aguas frescas,” but what exactly are they? Visitors to Mexico are sure to encounter aguas frescas, a popular category of drinks that are ubiquitous at food stands and eateries around the country. These colorful beverages, whose name literally means “fresh waters,” come in a variety…