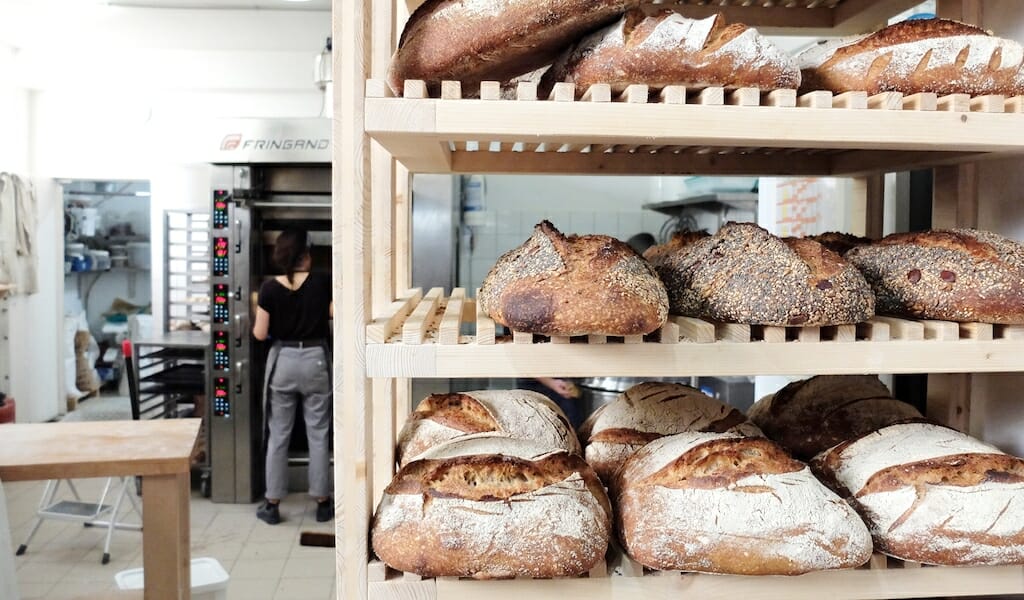 Giant sacks of organic Moulin Pichard flour are stacked high at the entrance of Pain Salvator. In the back of the boulangerie, the open kitchen hums – a baker rolls out dough as another one pulls out beautifully browned loaves from the oven with a giant wooden paddle. A third clad in a flour-dusted apron stacks the freshly baked goods on a metal cart, rolling it beside the counter in anticipation of the midday rush.

For owner Nicolle Baghdiguian-Wéber, being able to glimpse the bakery in action is intentional, the “real effort that goes into making bread,” she explains. Unlike others who “display their breads behind glass like in a pharmacy,” she wants her customers to see “flour on the floor, hands in the dough, the hard work.” Consequently, each loaf at Pain Salvator comes with a behind-the-scenes glimpse at boulanger life.

Bread is in Nicolle’s DNA. Growing up in the Saint-Antoine neighborhood, home to a large Armenian community since the early part of the 20th century, her grandma and mom were always baking bread, kneading dough and even toasting wheat at home. “I love the simplicity of bread,” she explains, “just flour, water and salt to make something so delicious.” 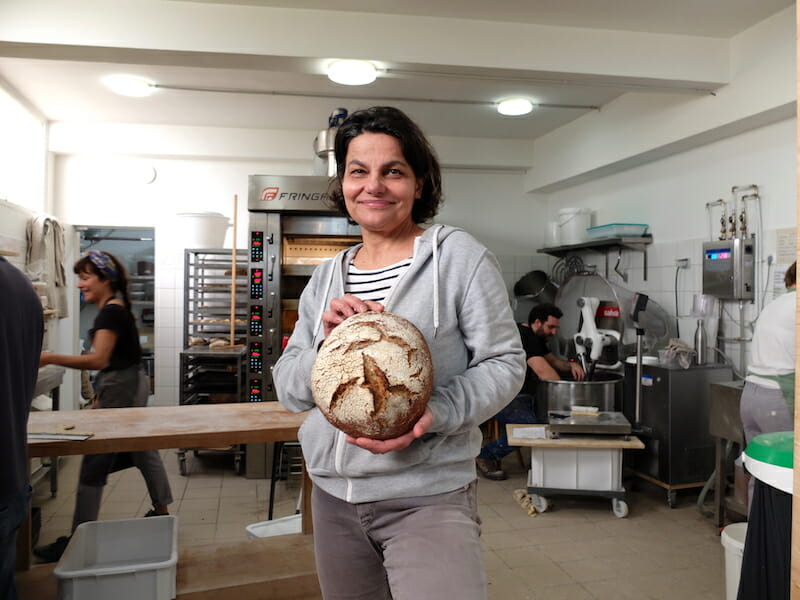 But baking bread for a living wasn’t in the cards, at least not at first – as a daughter of immigrants, she felt the pressure to get a white-collar job. After 30 years as an instructor, she was more than ready for a change. Losing her parents reinforced Nicolle’s need to be living each day to the fullest. “We’re living longer and healthier,” she says, so it would be a “curse to not do something that we love.” Plus, she had the “maturity to take risks,” and more free time with her kids out of the house.

Ever passionate about eating food as nature intended, the lifelong vegetarian enrolled at the École International de Boulangerie, the only French school that specializes in wild yeast breads (pain au levain) with an organic focus. It was like the “Silicon Valley of bread,” jokes Nicolle, her fellow students sharing the same intention to make bread their profession.

Full of bready savoir-faire, the 54-year-old hit a bureaucratic wall when applying for loans at banks, which told her she was “starting too late” to have a viable business. With savings (“I earned ten times more at my former job,” she admits) and the support of her husband, Etienne, Nicolle gave it a go on her own.

Her aim was to open in a part of the city center that lacked quality boulangeries. She found a space near the Préfecture on the slopes of Boulevard Louis Salvator – a fitting move, since the street is named after a Marseille entrepreneur who made his fortune as a grain broker in the 19th century. 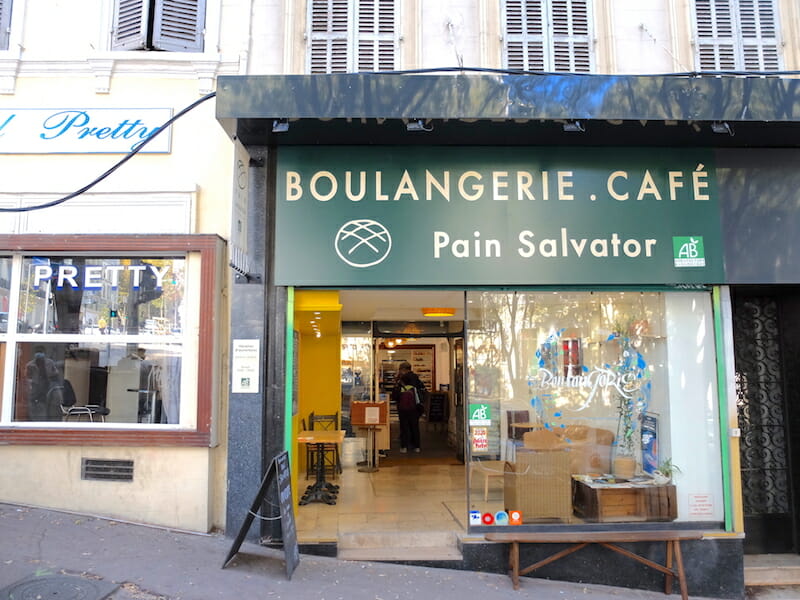 Nicolle and Etienne transformed the former fur shop and couturier, leaving behind the brass door handle, wooden molding and staircase of the historic building. Pain Salvator opened its doors in February 2019 as Marseille’s first 100 percent organic boulangerie, to the delight of neighborhood denizens, local shop owners and bread aficionados across the city.

On the menu, you’ll find oval loaves of pain de campagne, French sourdough, made with rye yeast. When generously topped with poppy, sunflower, sesame and pumpkin seeds, it becomes the aptly named oiseleur, bird-catcher. The nutrient-dense seeds also make an appearance on the rectangular fig and nut breads, which we love with goat cheese, and the addictive crackers.

Fans of ancient grains will love the khorasan (kamut) and petit epautre (spelt) loaves; as Nicole explains, the latter is known as “meat” among vegetarians for its high levels of amino acids and protein. Thanks to the labor-intensive three-day fermentation process (for comparison, a typical baguette is made in a day), all of Pain Salvator’s breads have a lower gluten and glycemic (sugar) index, making them easier to digest.

“I love the simplicity of bread,” she explains, “just flour, water and salt to make something so delicious.”

The whole grains’ long fermentation also amps up the breads’ protein – a whopping 14 grams compared to a measly two grams in a slice of industrial white bread. “This bread gives me energy,” affirms Nicolle, who fuels up on her wares for every meal. In spite of the higher cost of whole-grain, regionally milled flour, she prices her bread reasonably – explaining that by weight, her €4.80 pain de campagne costs the same per kilogram as a €1.20 classic baguette.

Also on the menu, a quartet of treats bathed in olive oil: a fantastic focaccia, pissaladière (olive onion tart), olive fougasse, and pompe à l’huile, a traditional Provençal bun flavored with orange flower water. Other savory specialties include a pizza and a weekly vegetarian sandwich which Nicolle fills with a balance of veggies, protein and fiber like the tofu, roasted leeks and herb pesto combo we devoured.

On the patisserie side, the credo is wholesome but gourmand, that is grains mixed with high-quality butter and chocolate. Think Linzer torte and chocolate hazelnut babka, a brioche-like bread. The canistrelli, the vegan anise and olive oil cookies that hail from Corsica, are Nicolle’s ideal “light bite with your coffee” when you want just a bit of sweet. 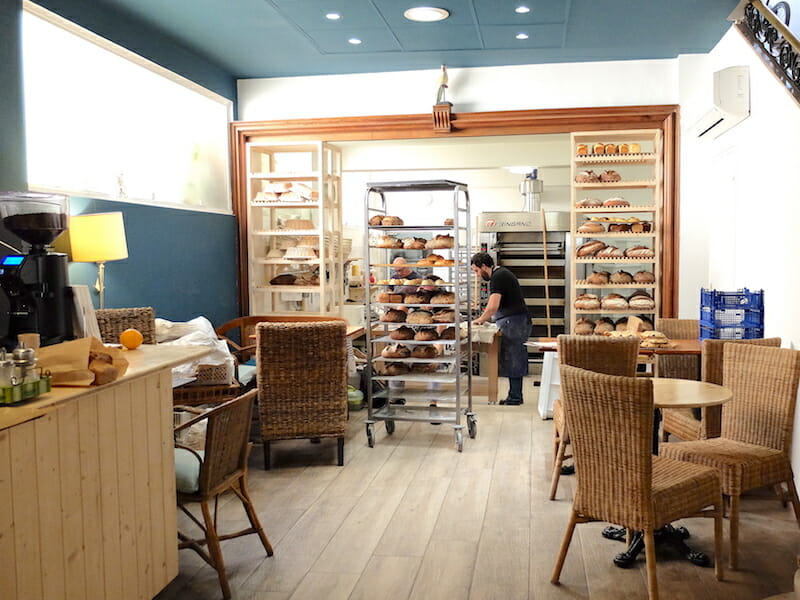 Breakfast baked goods include round cinnamon buns and long chocolate-chip studded rolls. Prior to the lockdown, it was common to see customers reading the morning paper with the in-house petit déjeuner: slices of brioche and grainy breads, juice and a hot beverage for €6.50. In fact, it’s the type of place where locals congregate throughout the day, lunching at tables between the counter and kitchen, or curling up on the sofa at the windowed nook with a beer or glass of wine – the bakery pours drinks from a few organic compatriots – in hand.

For now, though, Pain Salvator is fully focused on keeping Marseillais stocked with nourishing loaves. The city’s second lockdown (le confinement) has shuttered restaurants and banned in-house dining, forcing the boulangerie’s customers to take their baked goods to go. This has affected the bakery’s bottom line, especially since beverage sales, particularly beer and wine, are a vital financial boost for restaurateurs. Thankfully, their bread sales are still going strong, as witnessed by the line each time we visit.

At almost two years in, the Pain Salvator family has expanded to four bakers to stock the shop and the weekly farmers’ markets that Etienne mans. And the neighborhood has also upped their addresses for levain-based loaves, with two other artisan boulangeries nearby. “There is a place for everyone,” smiles Nicolle, ever eager to make this “most essential food” more accessible. And at its most wholesomely delicious.

Editor’s note: This is the first dispatch in our “Essential Services” series, which highlights the places that are permitted to remain open during lockdowns in order to best nourish their cities. 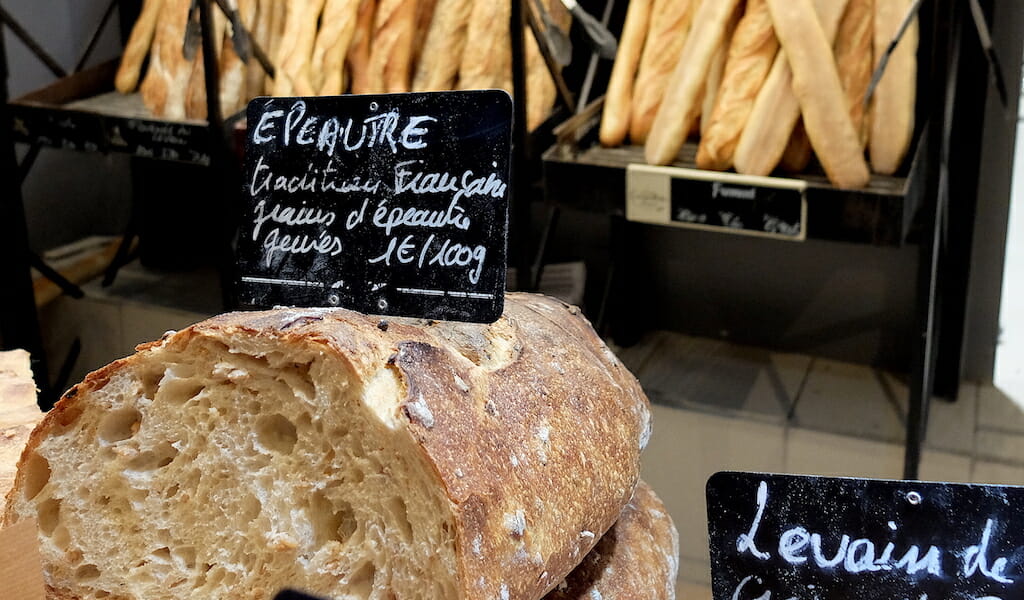 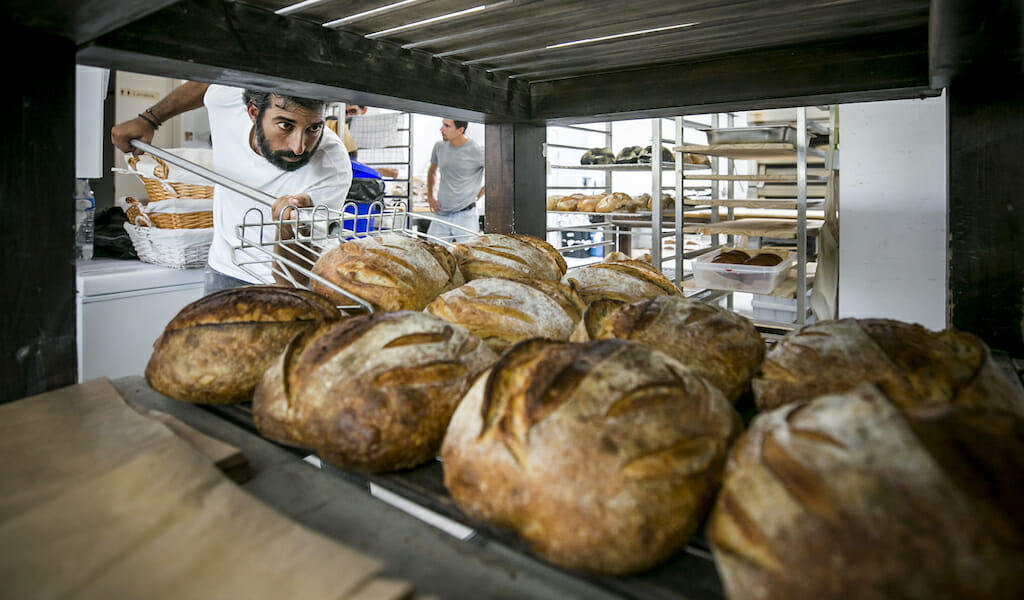